We awoke parked in Laurels driveway to mostly sunny skies, slightly damp after a rainy night. A mist of clouds was hanging on the Moab Rim and the LaSal mountains were obscured by weather. The four of us gathered and discussed what to do today and we decided even though rain was in the forecast to run the river anyway! 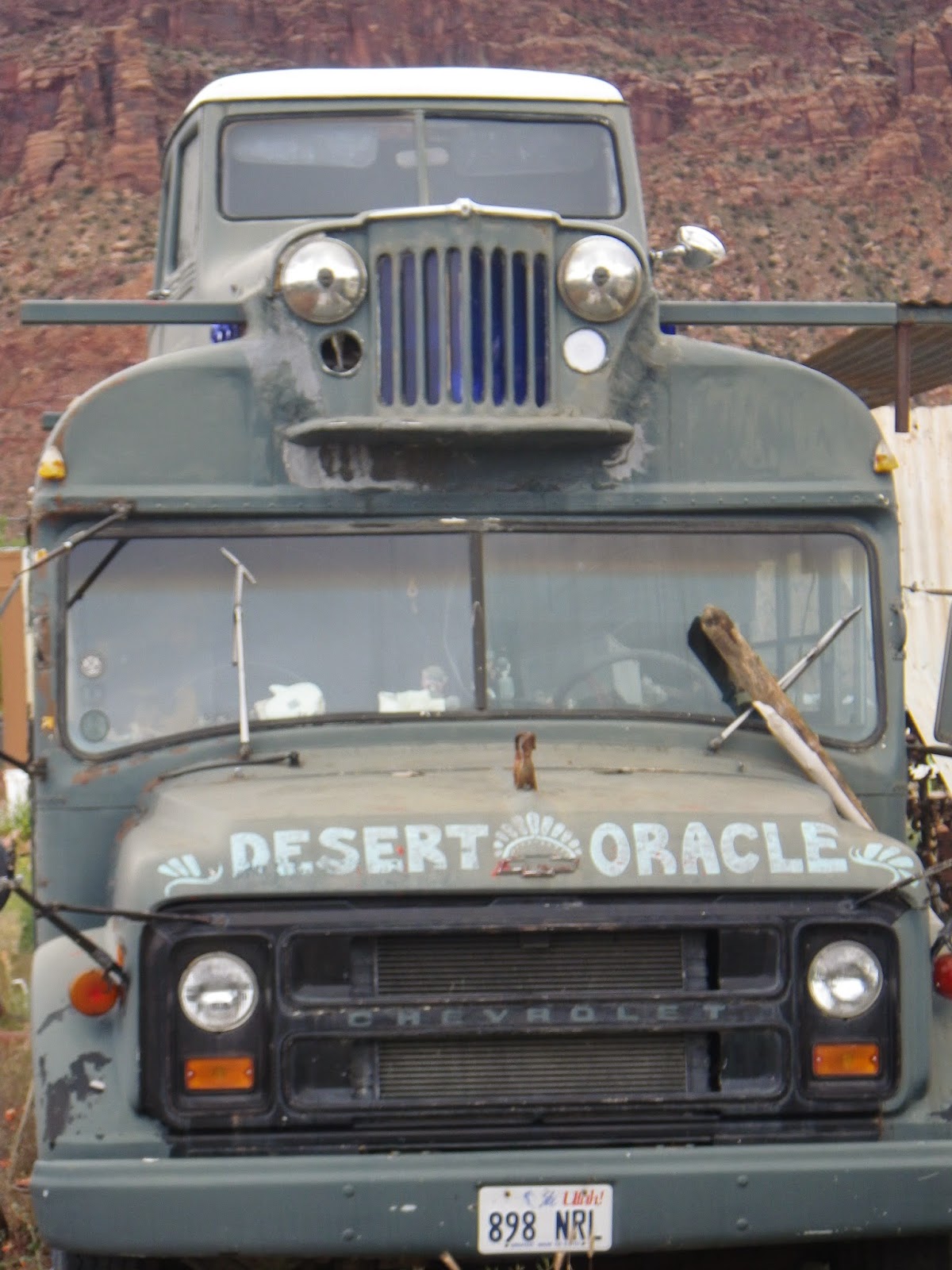 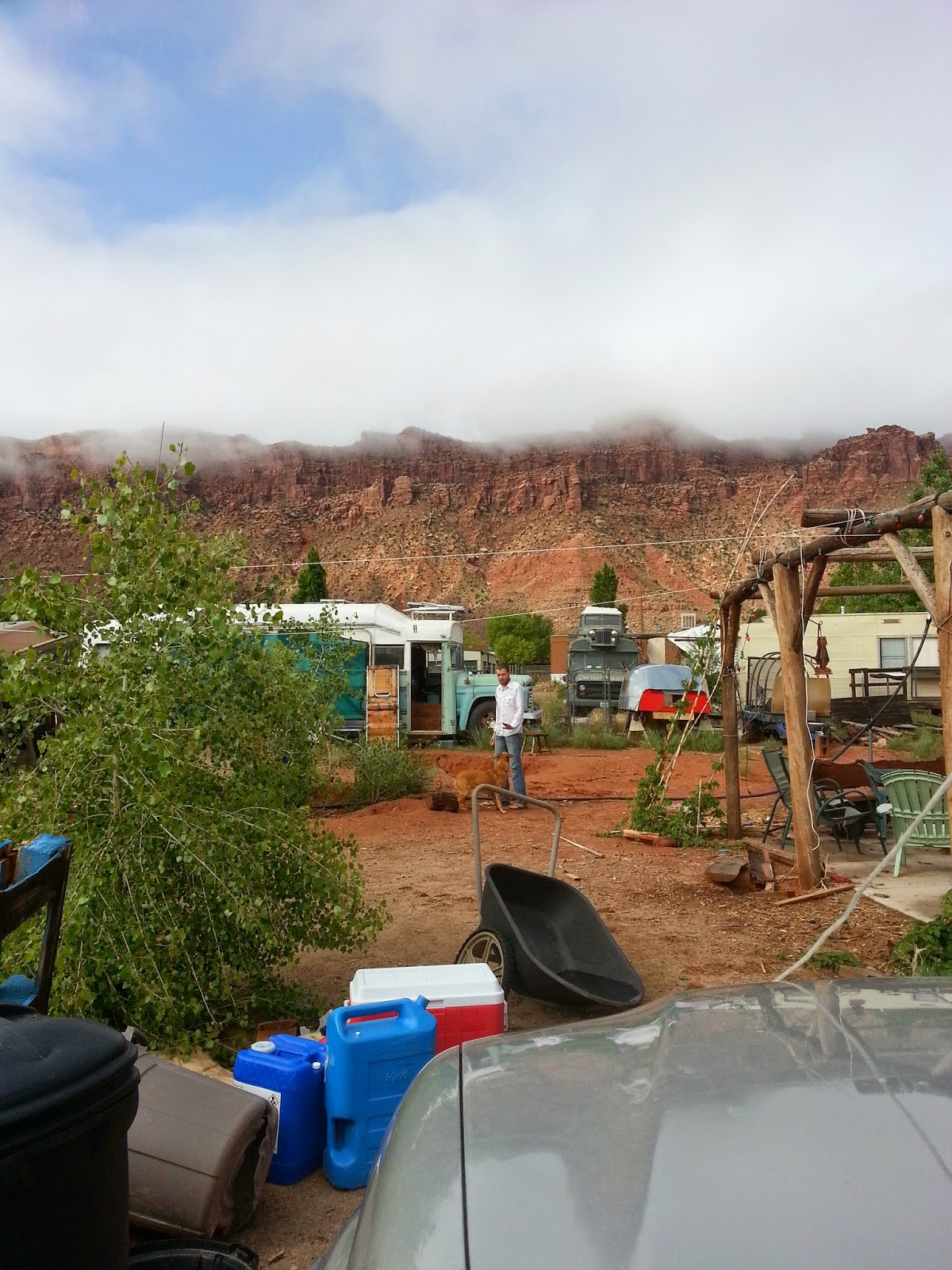 Awesome! So we went out to breakfast where I got some amazing french toast. I overheard the waitress talking about the rain. Huh..? I looked outside and it was a wild downpour. So abrupt and unexpected. I ran outside in it to make sure our windows were closed which they weren't. The rain wasn't gonna stop us today. We hung around town for a while and waited it out. We had to make a mad dash across the parking lot to the cars! 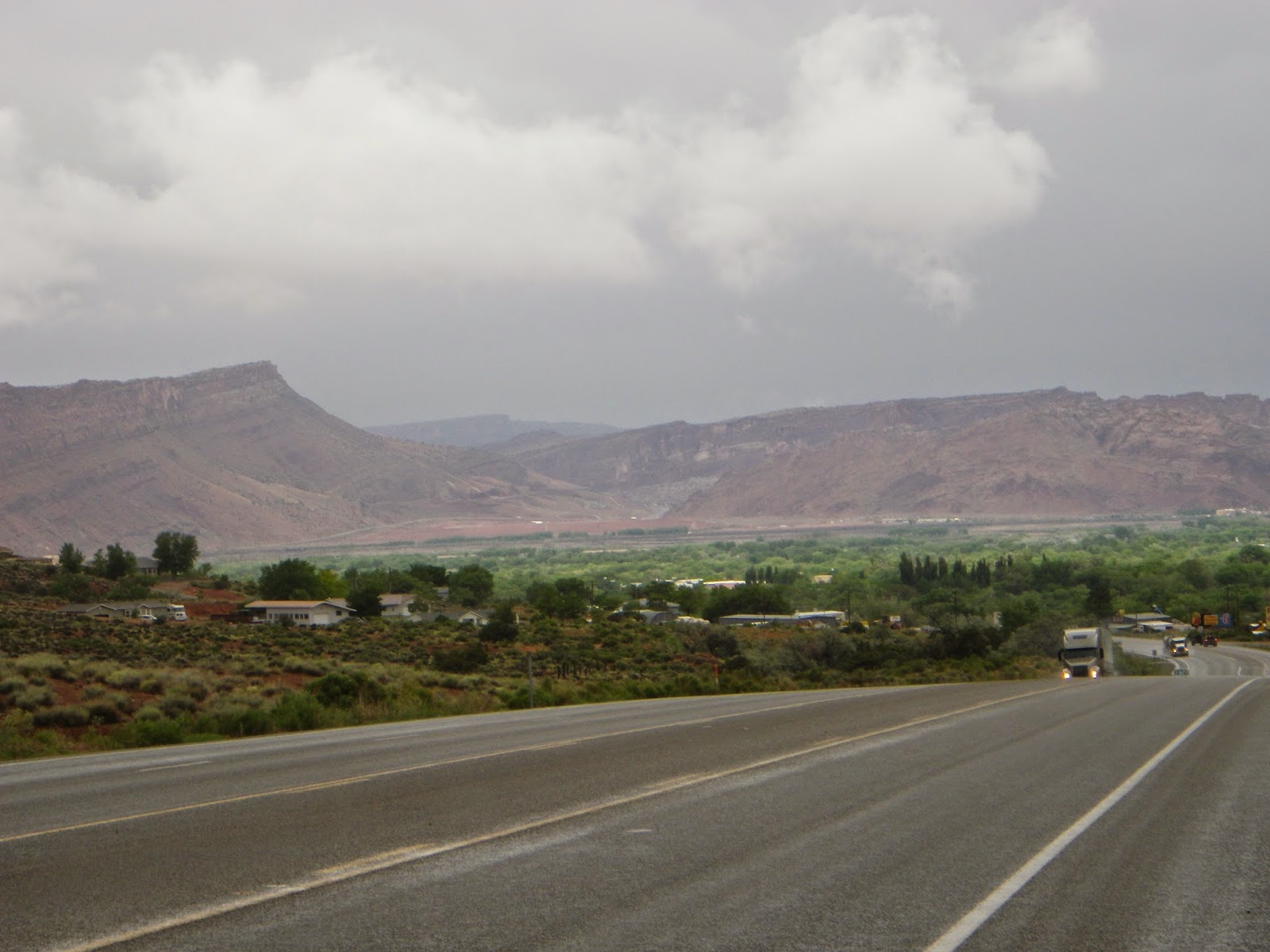 It did stop and we inflated the boat. It took us many hours to pack all our gear into dry bags and to get the boat strapped hilariously on Laurel's car. 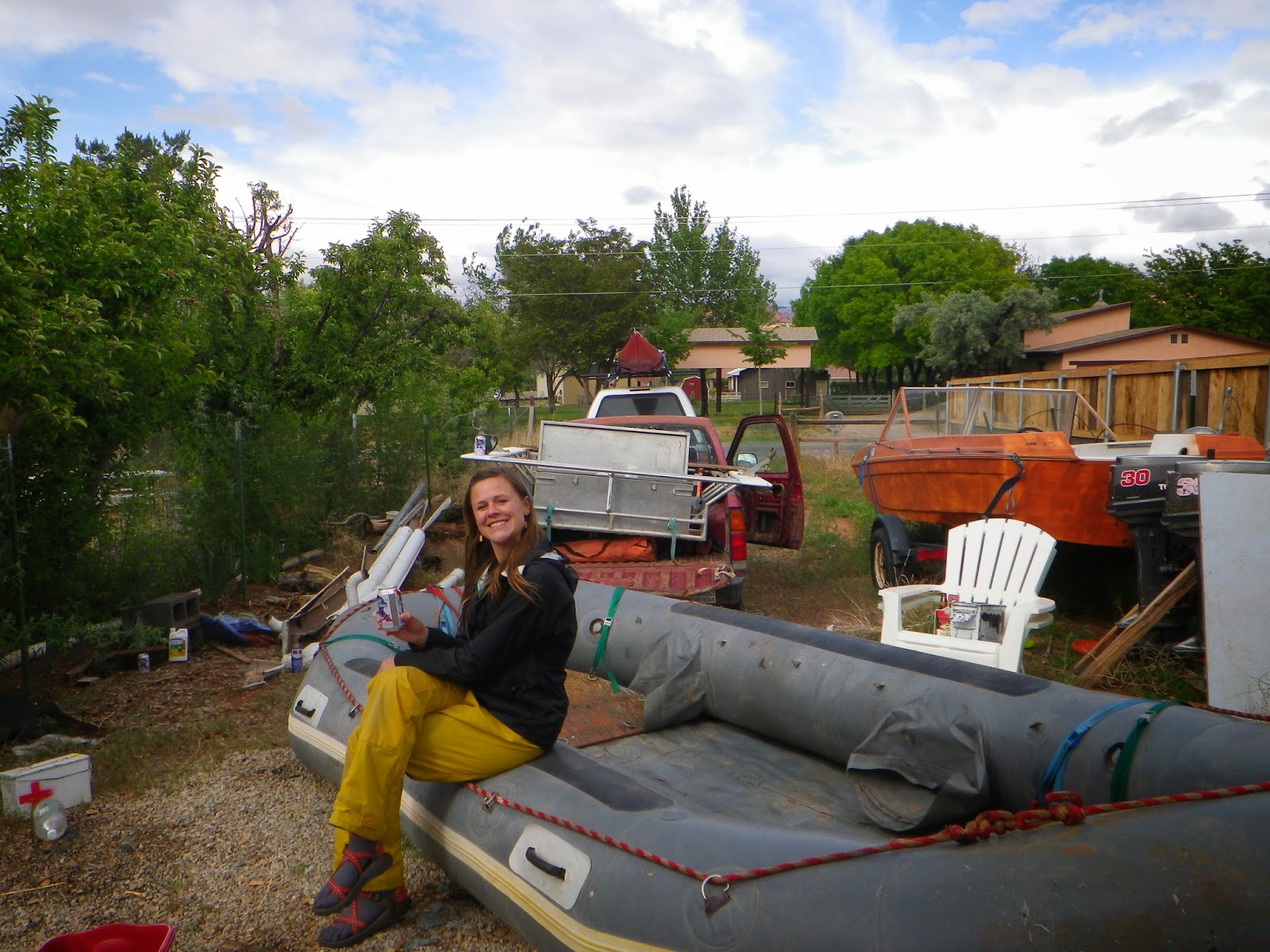 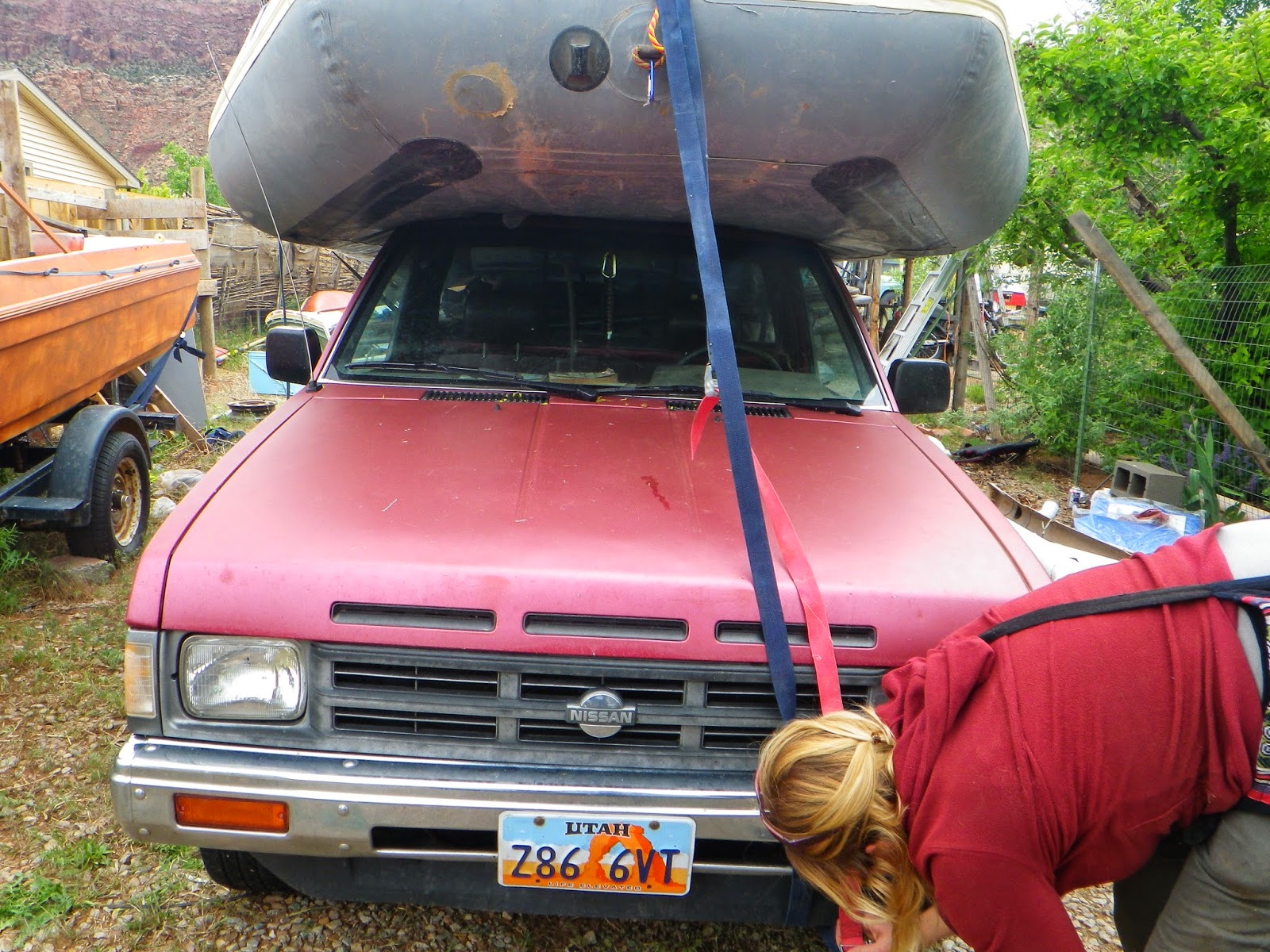 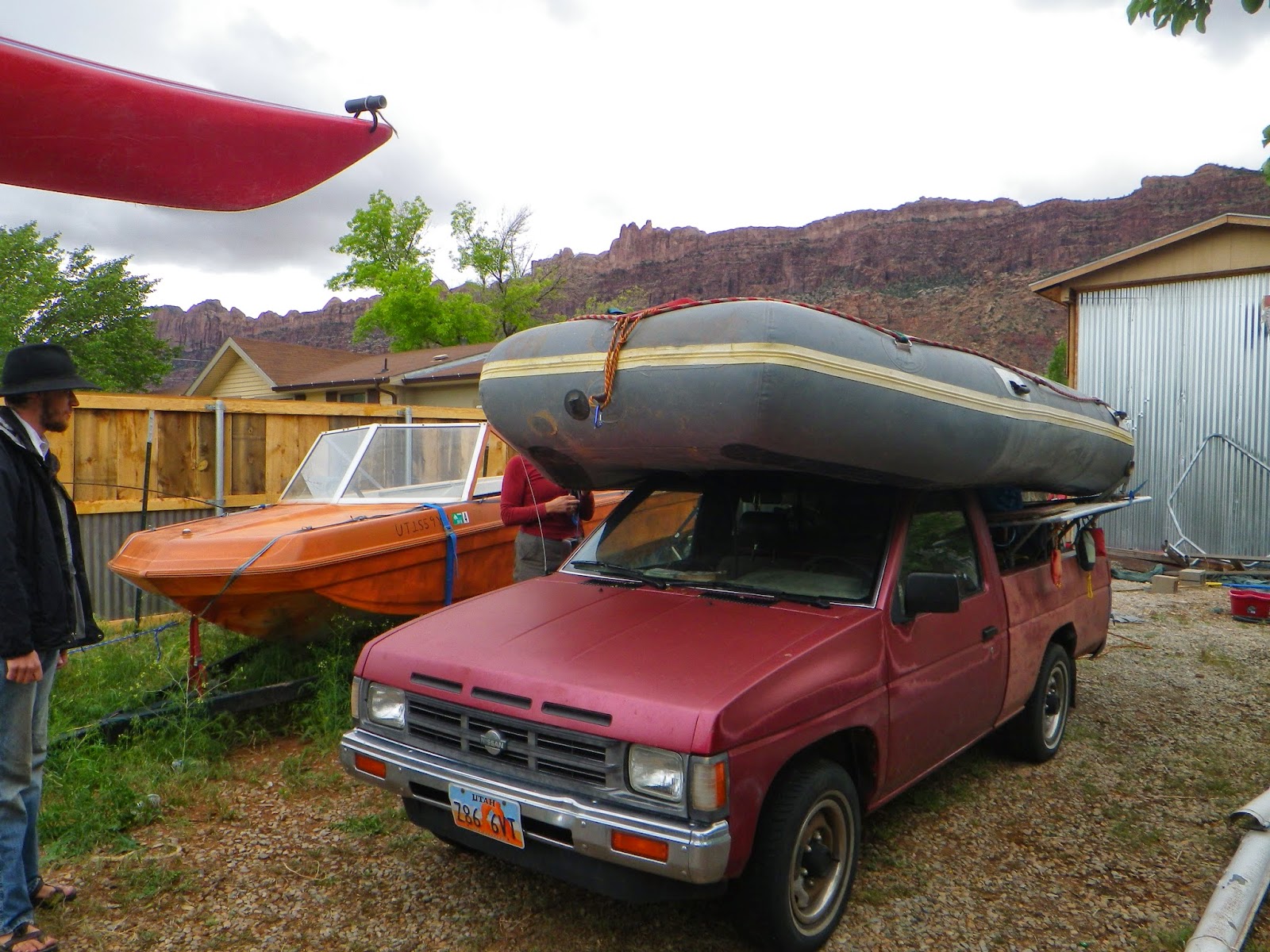 We organized our car shuttle and off we went, driving up the River Road, heading upstream on the Colorado. It was getting late now, we got the boat unloaded and into the water around 7:30 p.m.. The sun here has been staying out to about 9 o'clock though, and we made it to Laurel's fabulous onion beach camp by 8. Just a quick half mile float. It was cold but we are all worked together and set up a great camp, under a tarp, and with a roaring fire. We still expected rain but it never came. We all visited for hours into the night eating pasta and excessive chocolate and drinking Lars' homemade rum. Beautiful view of the Fisher towers and Castle Valley. 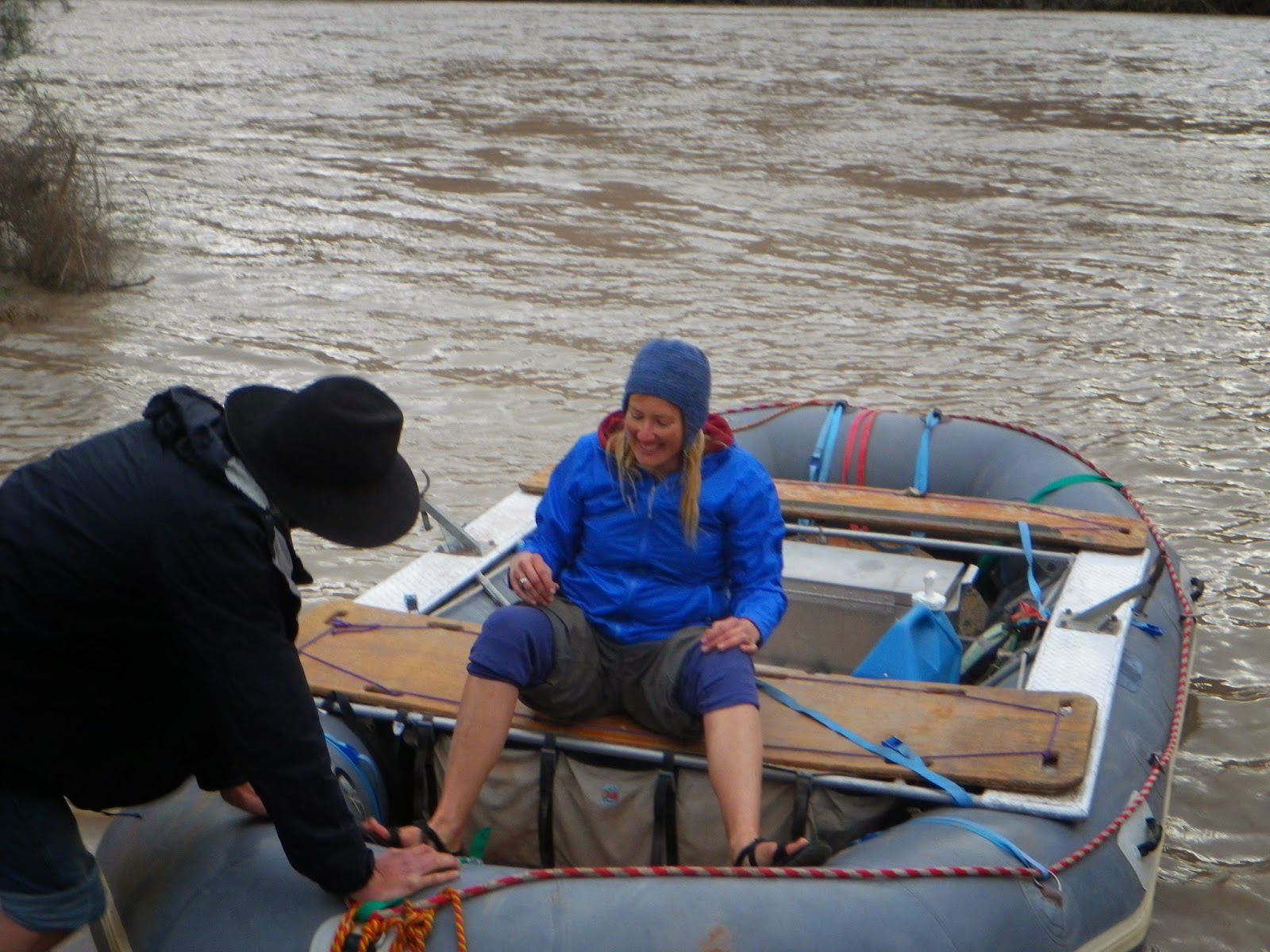 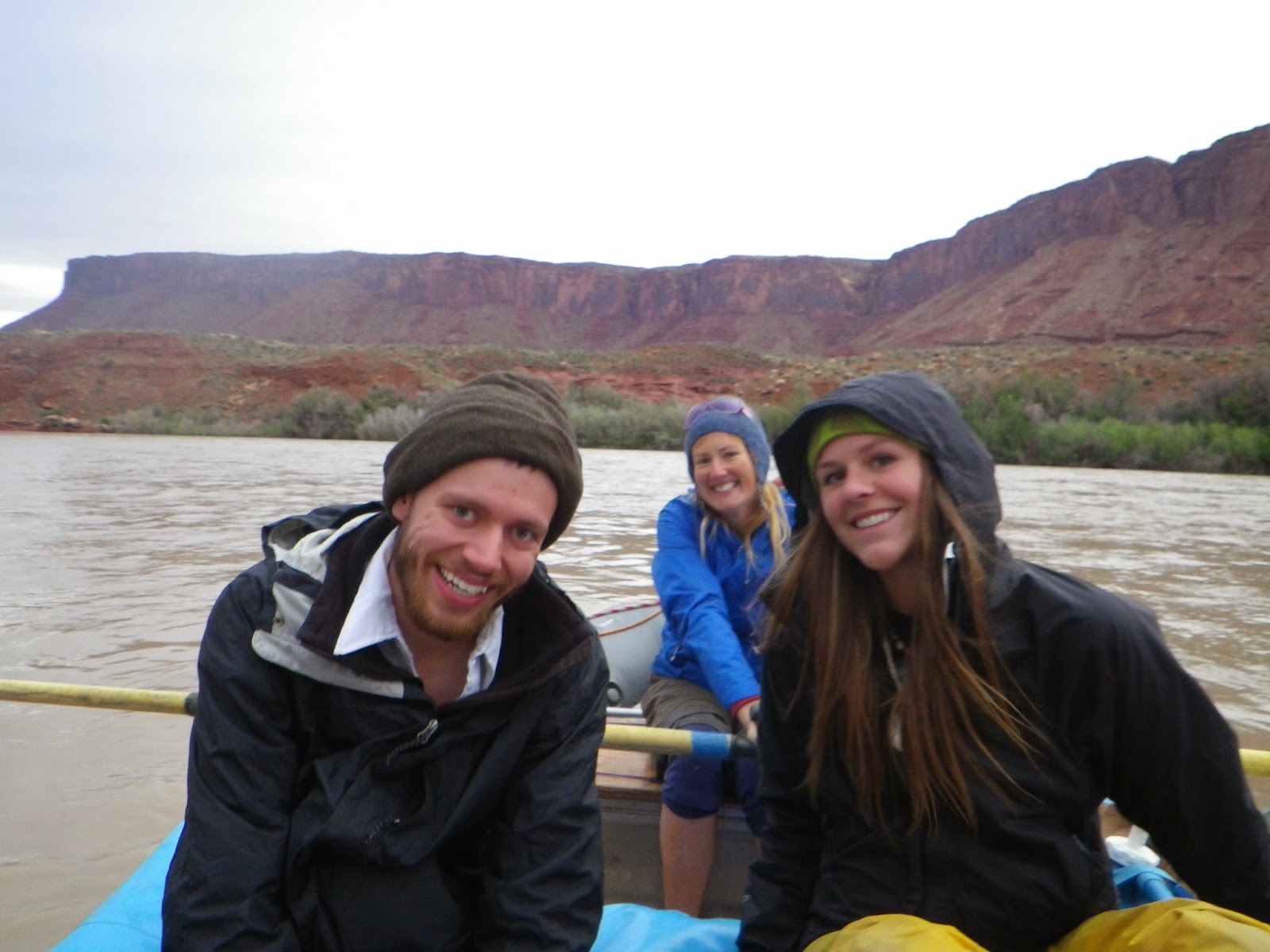 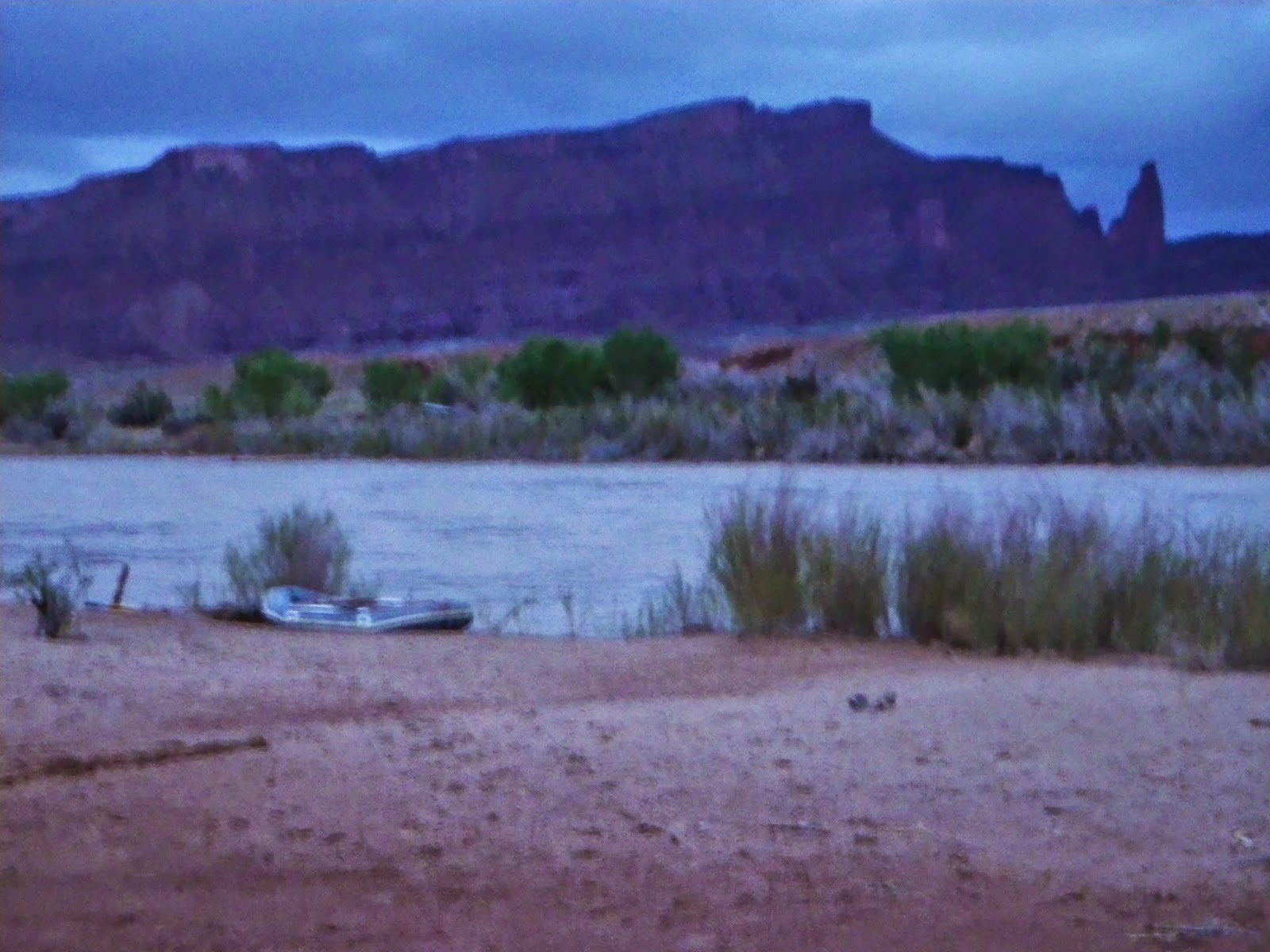 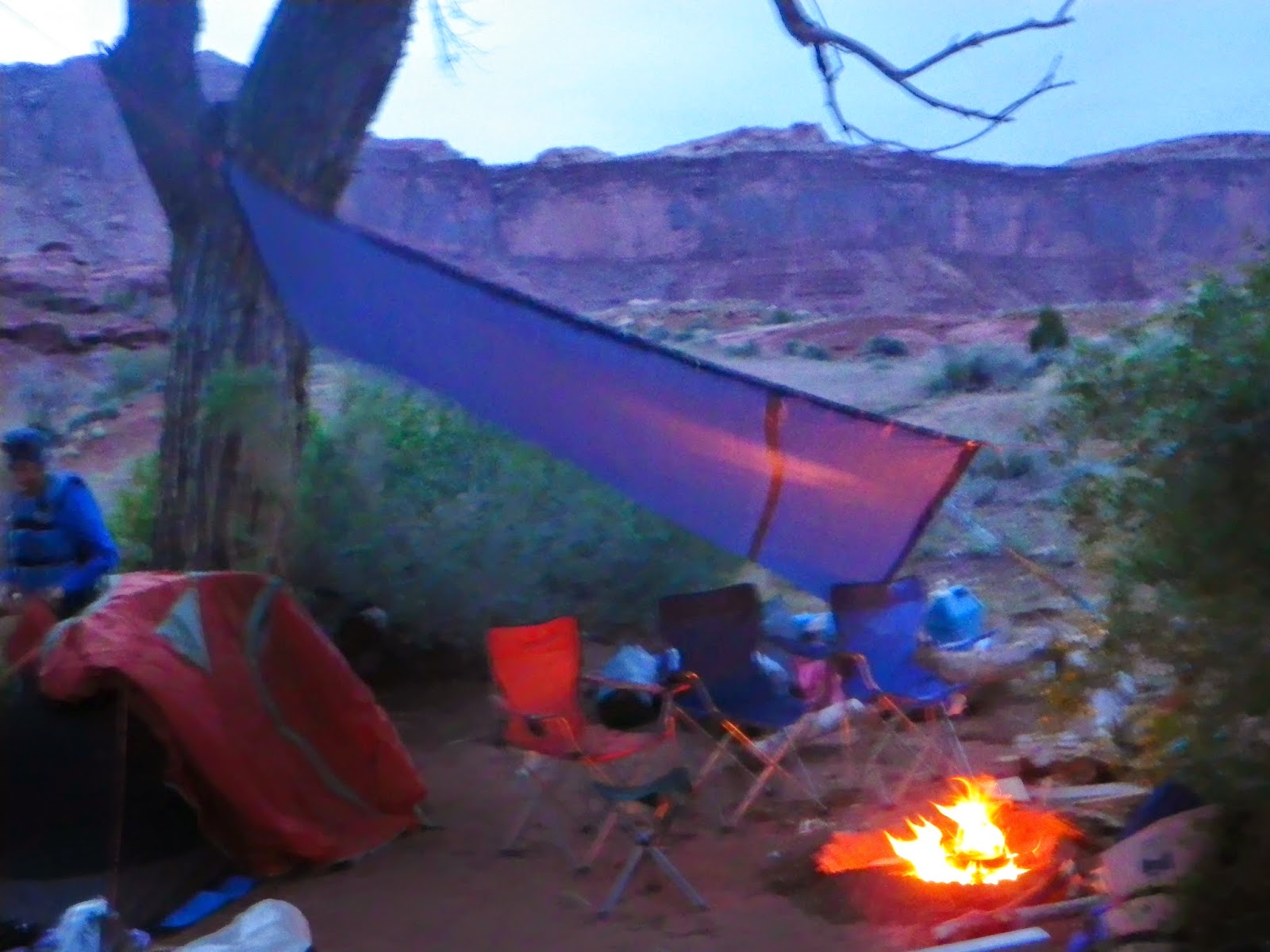 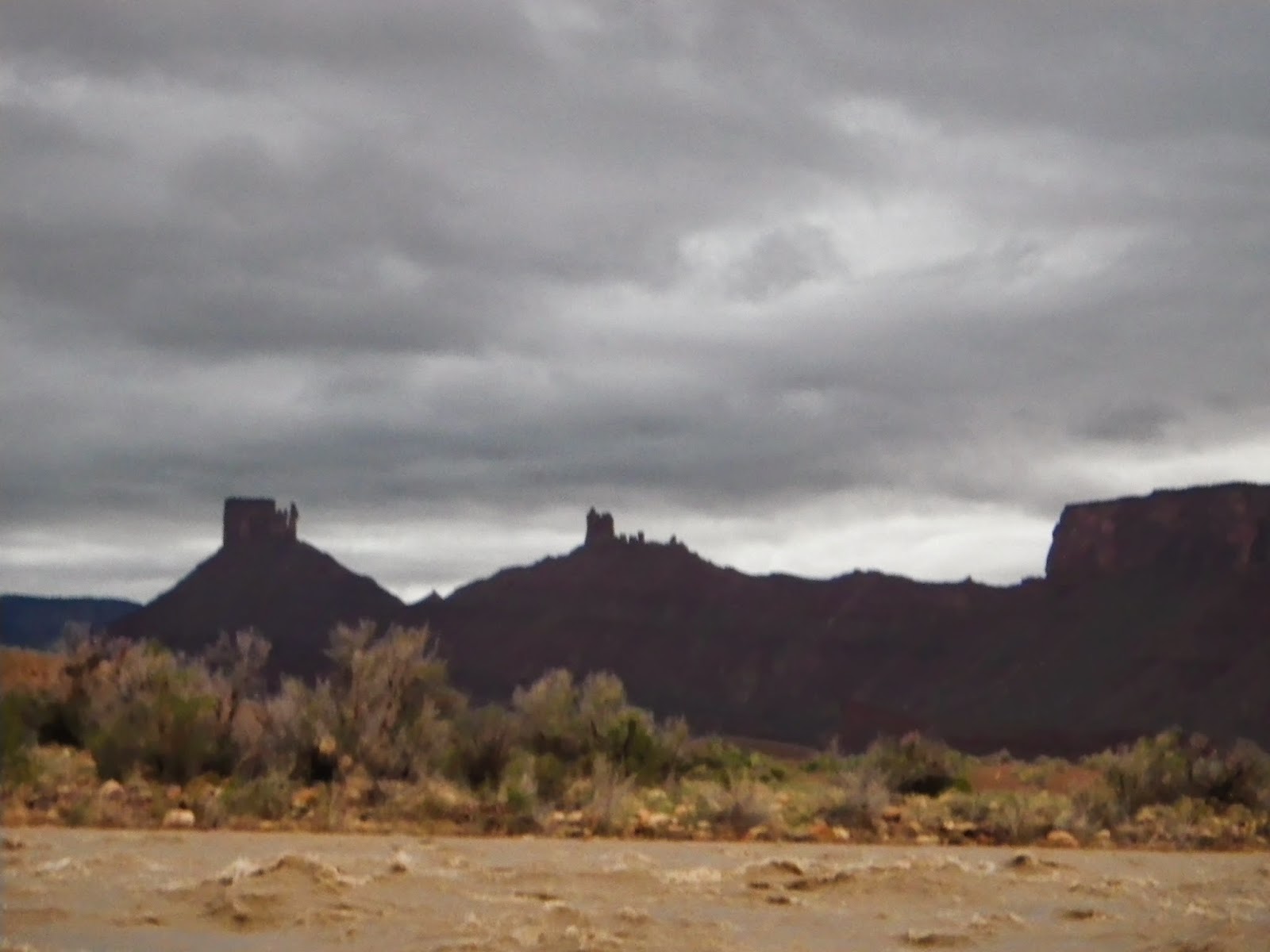 We slept excellently that night but woke up to heavy cloud cover and it was about 45 degrees. Oh well only one way down the river now! We had sausage and hard boiled eggs and then climbed around a canyon for a bit. 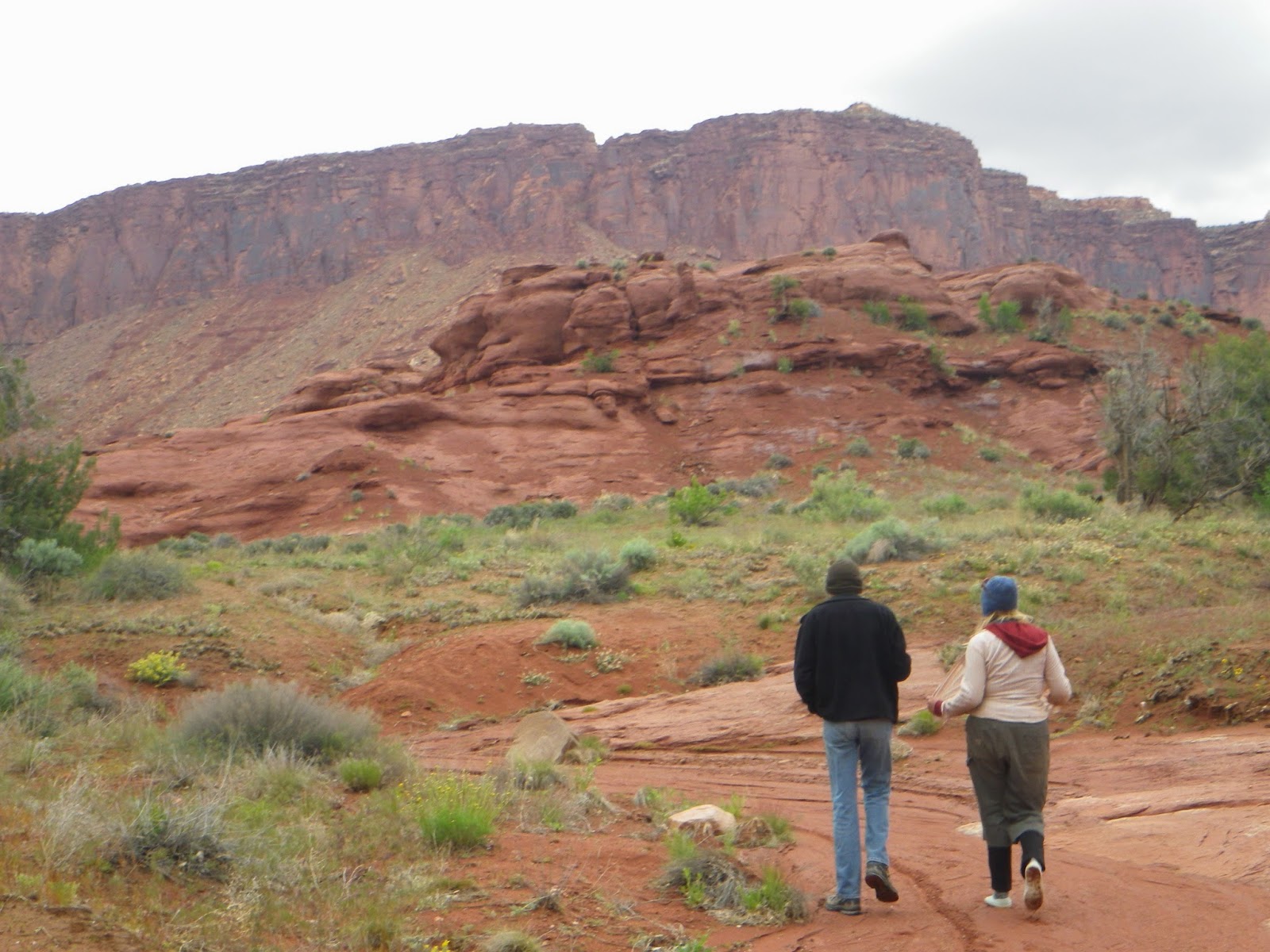 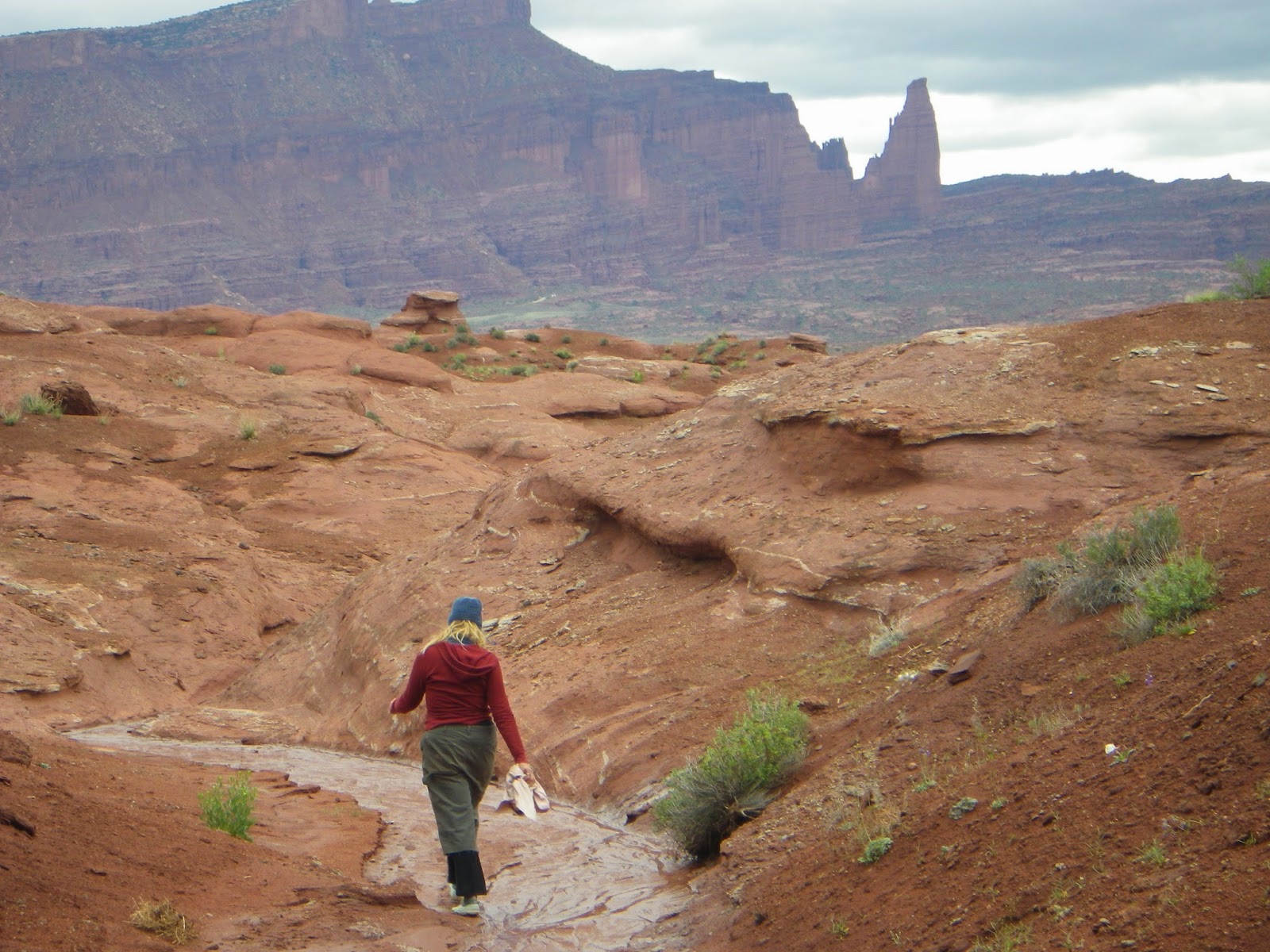 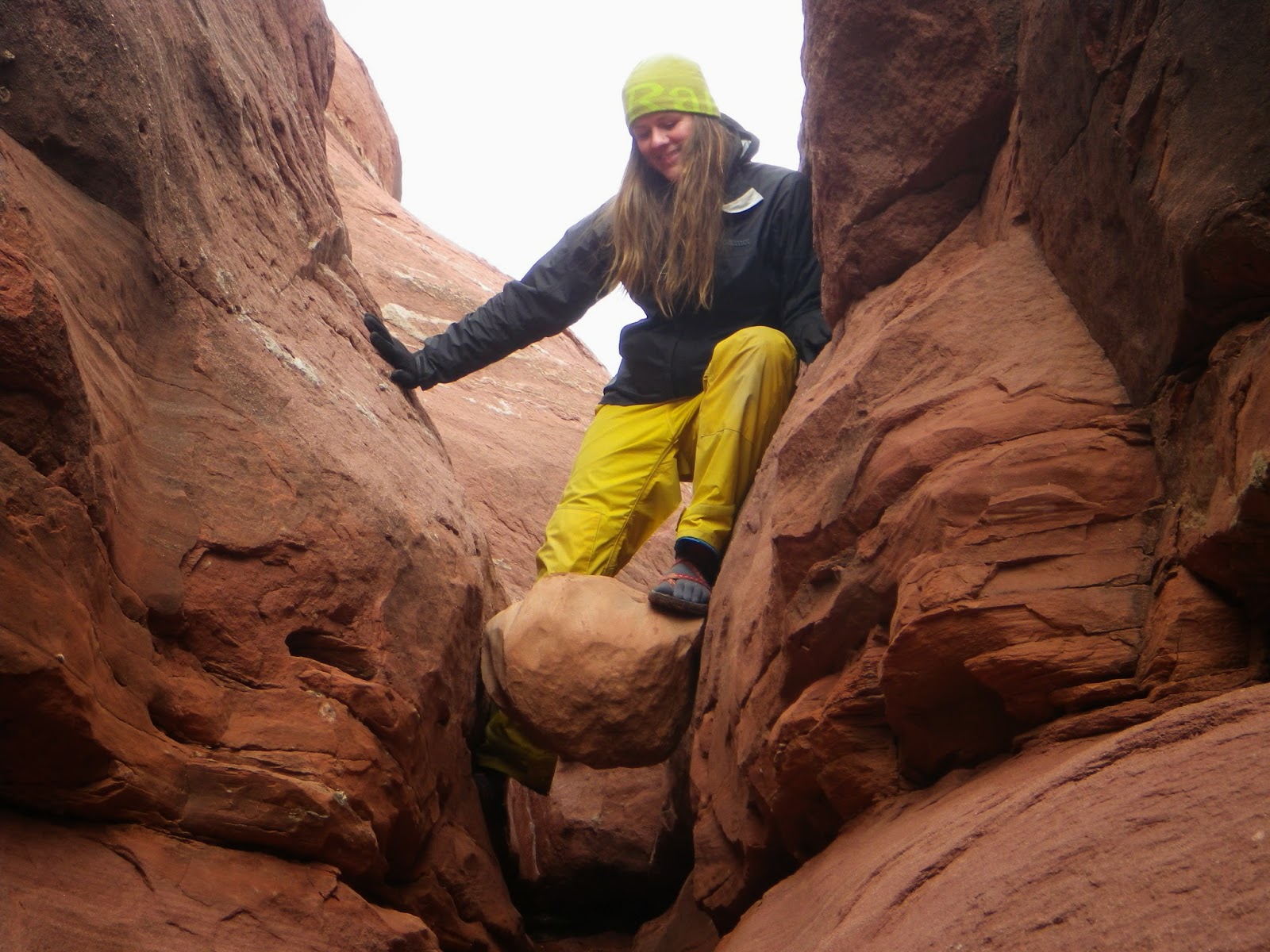 By noon the day had warmed up slightly but was still cloudy. Dressed in all our rain gear and warm clothes we happily loaded "The Niad" and off we went. 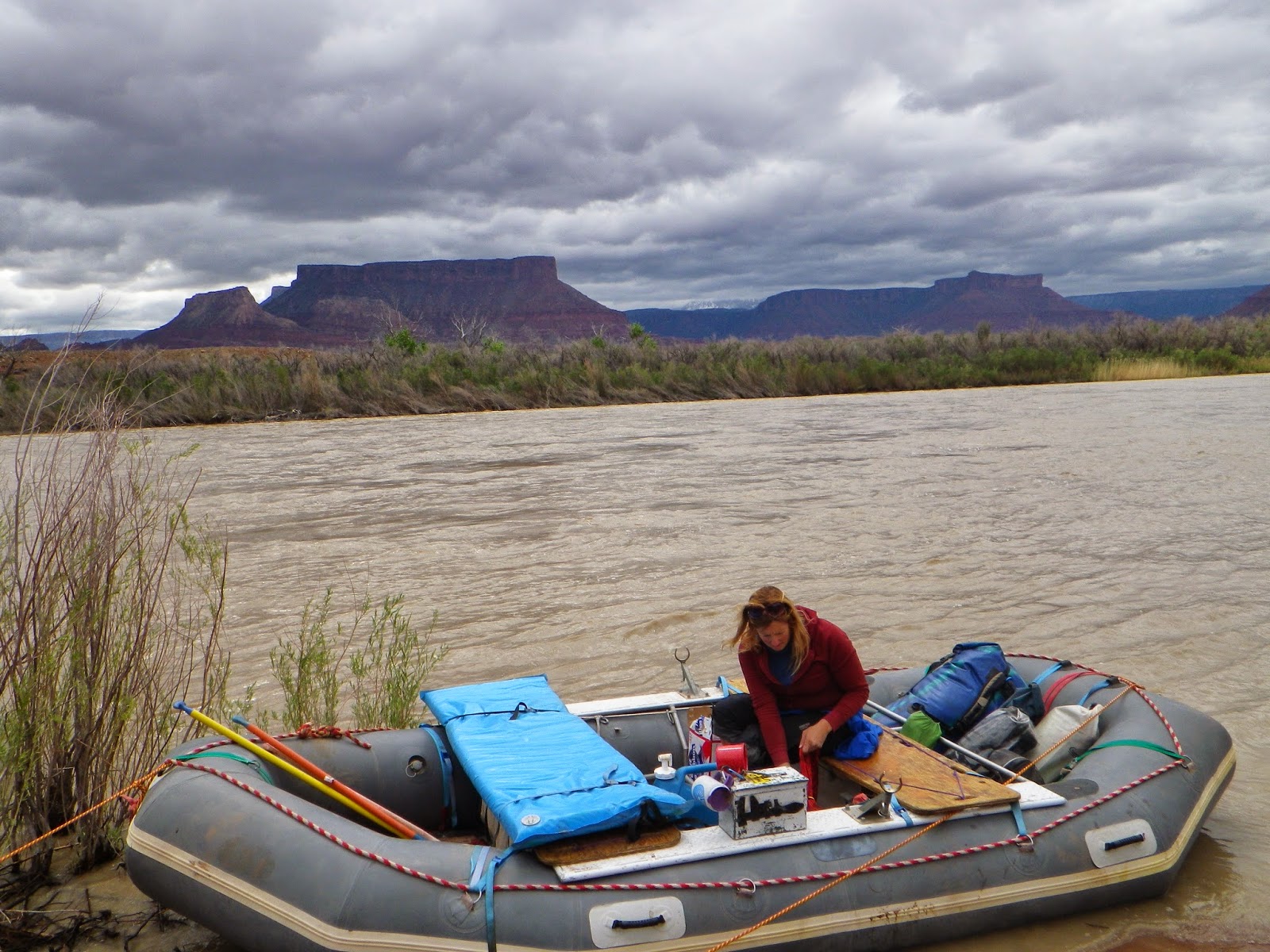 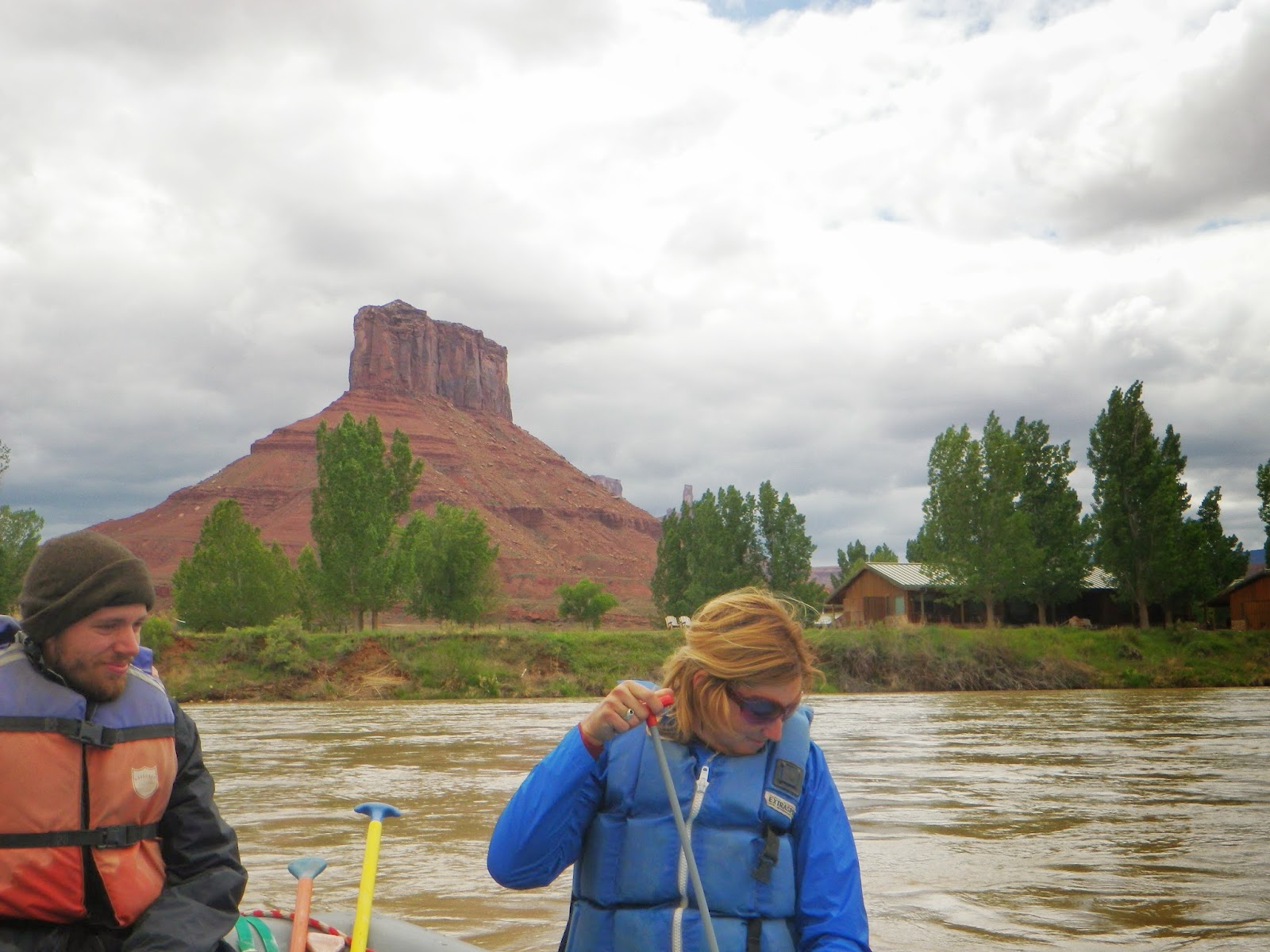 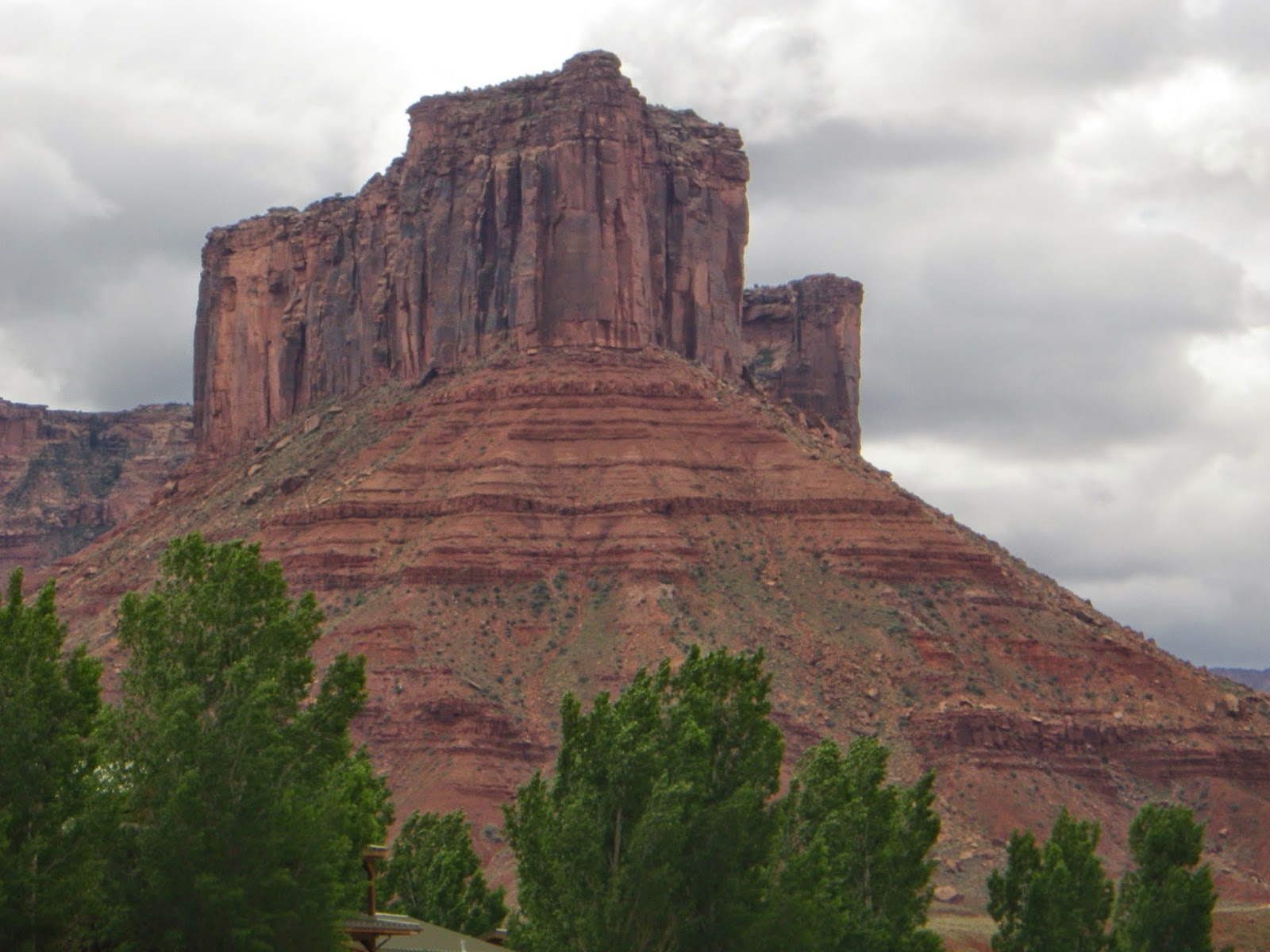 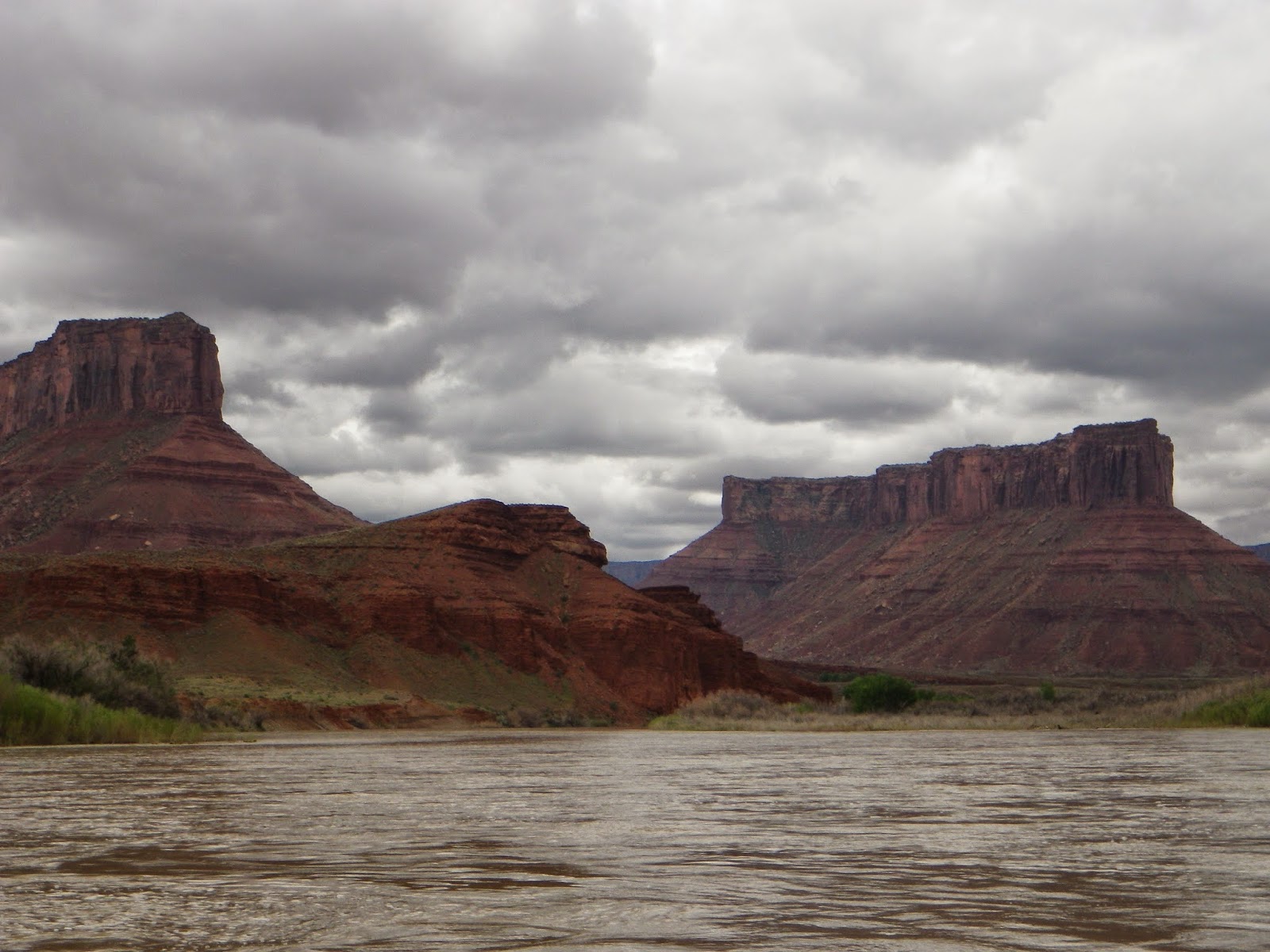 Floating on the river felt so wonderful, so peaceful and relaxing. The scenery slowly passing by. The mesas constantly changing with the angle we were at. The bad weather was fine, it just made it feel more adventurous. Then we hit our first rapid, what excitement! Passing rambunctiously over the rolling brown water. Getting splashed with the shockingly cold brine. Then quickly it's over and back to relaxing. I took my turn at the oars and steered us through the next 3 rapids. I've rowed small boat all my life but never one this big, and never on a river, but the concept is the same. 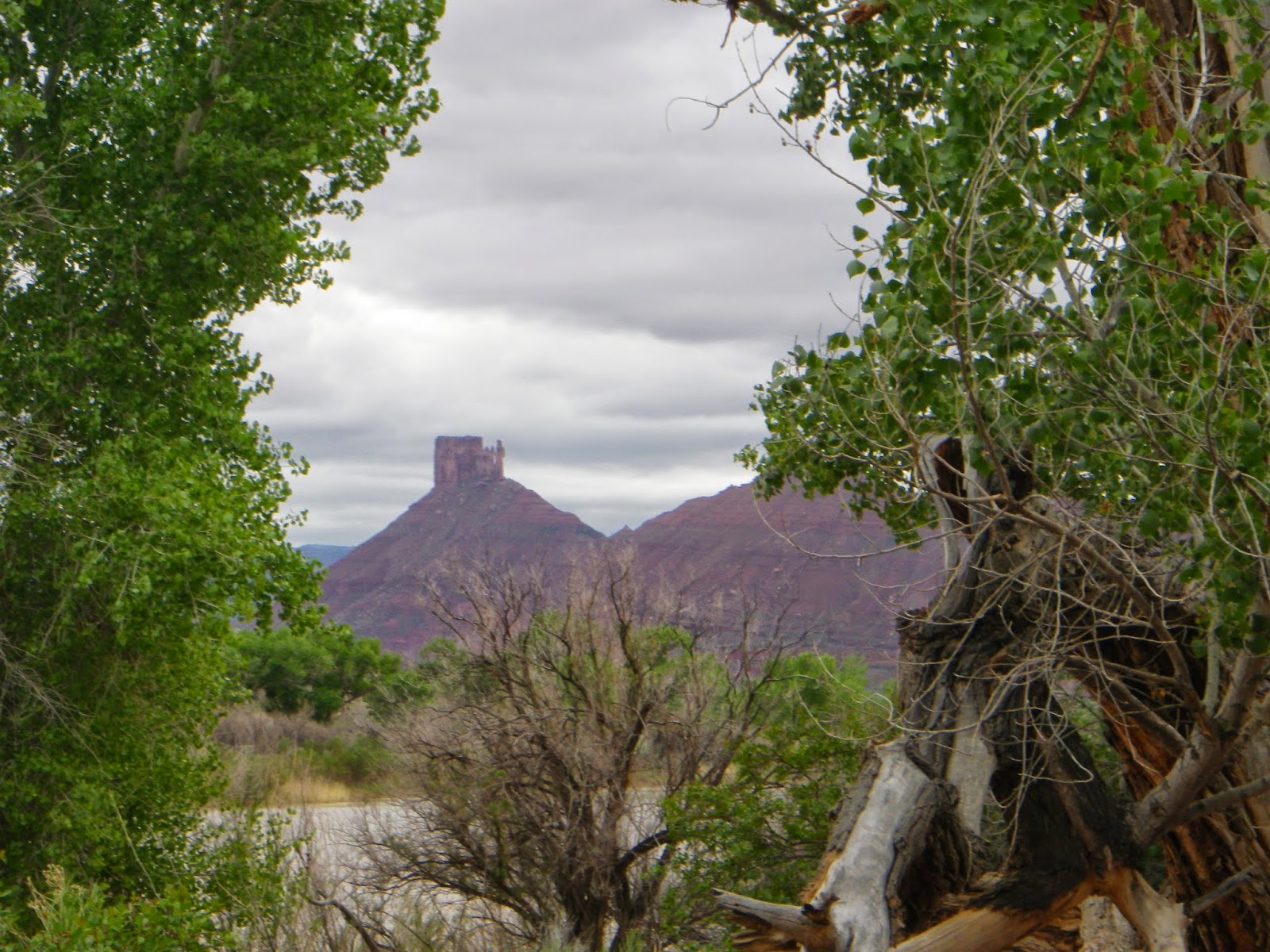 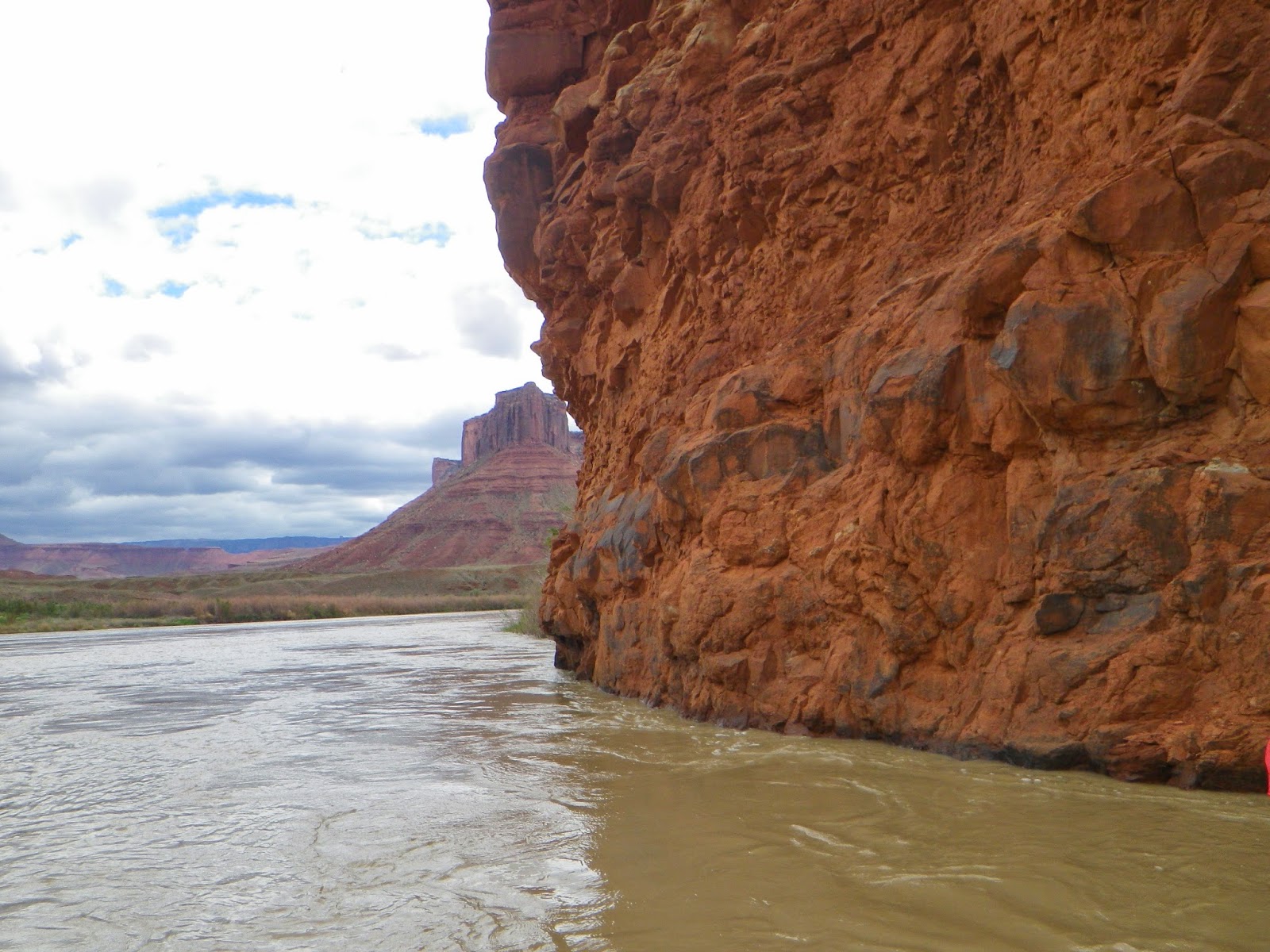 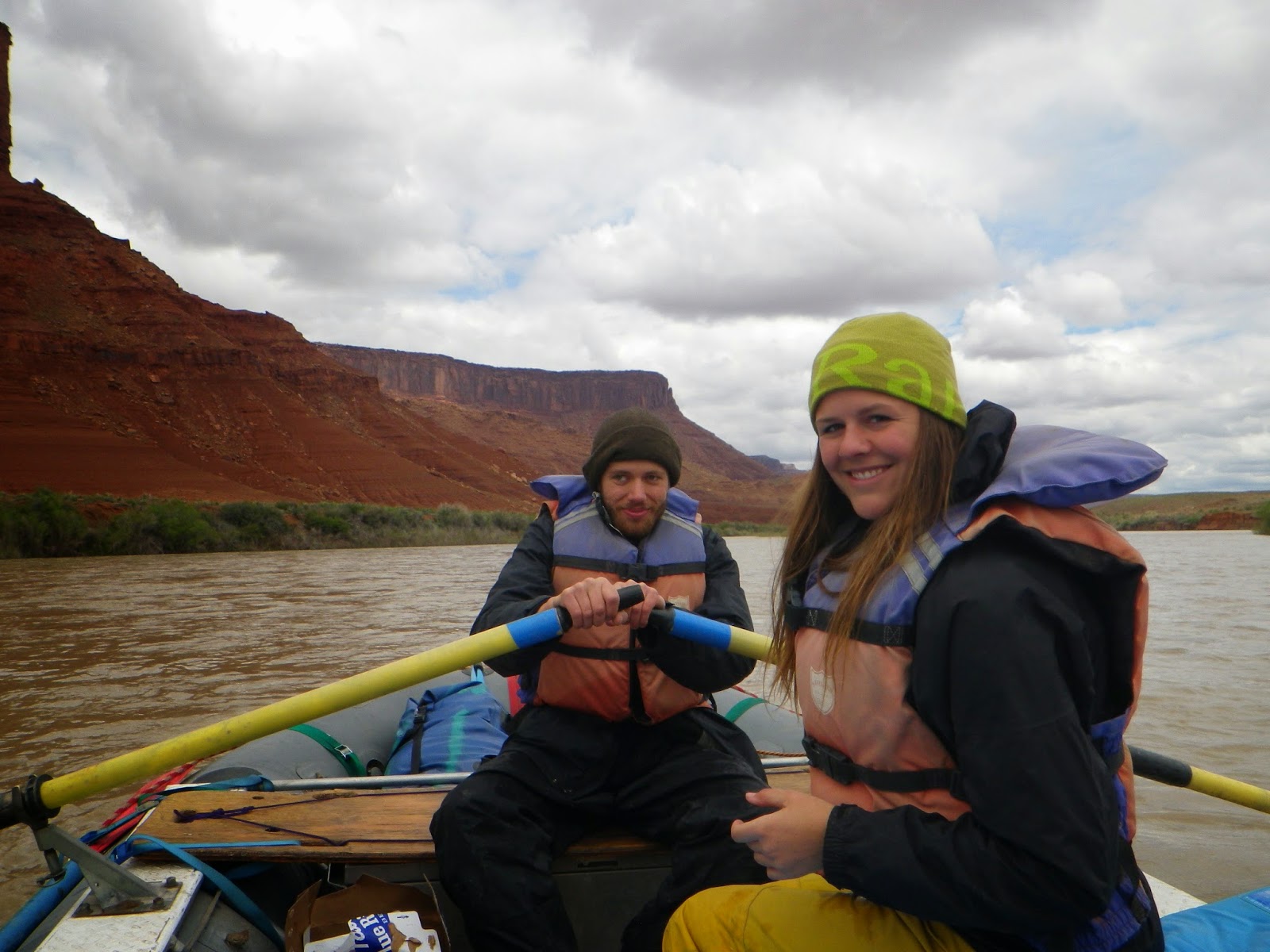 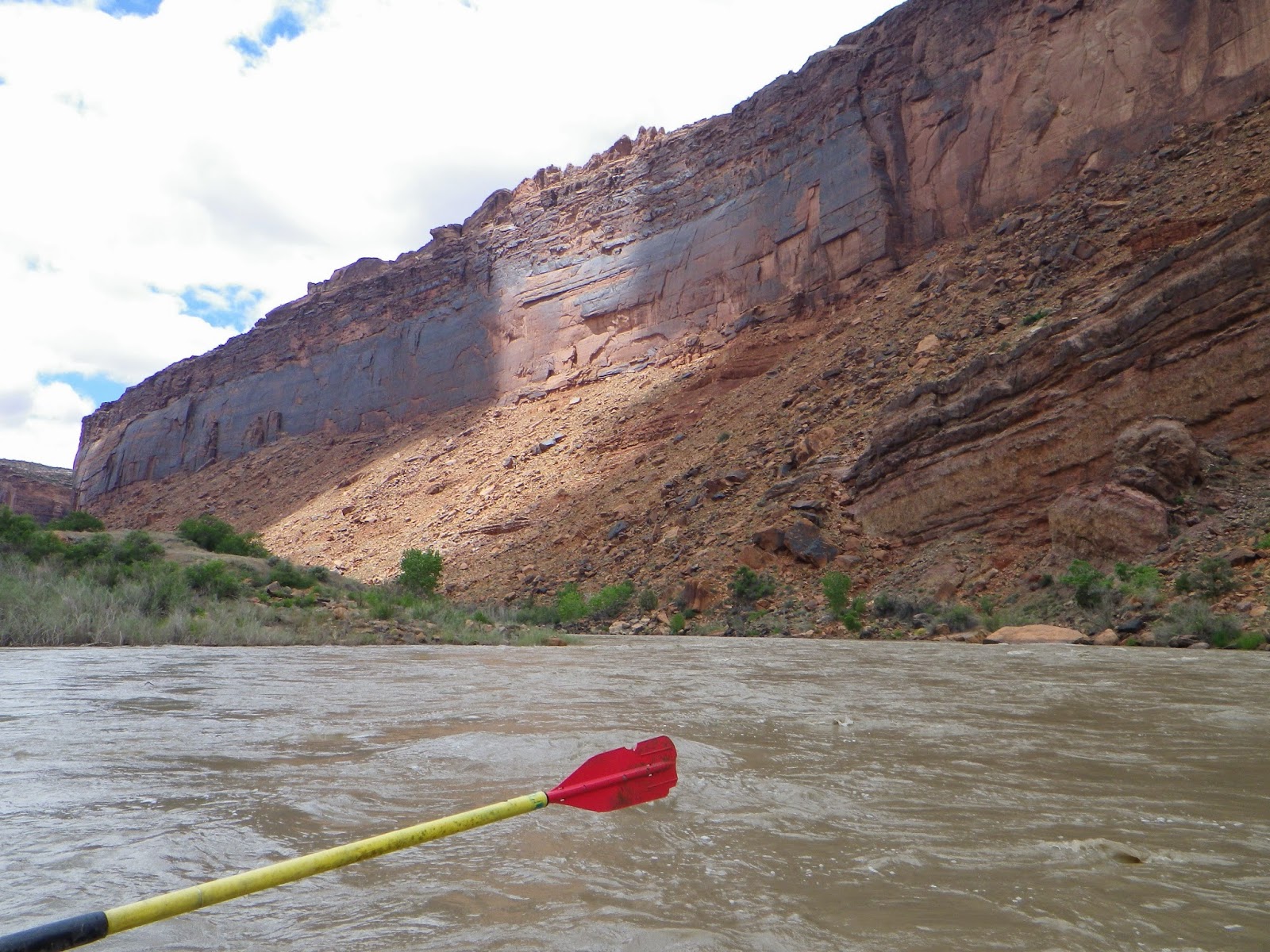 I came to the beastly "New Rapid" and became tense and scared upon the approach. A red cliff face on river-left, strewn with boulders on river-right. Left of the boulders a small drop created a little waterfall and I wanted to hit the rapid just left of that, in the wild chop of the waves. With a little instinct and Laurel's shouted directions over the raging torrent, I hit it perfectly. It's similar to kayaking, head into the waves, never take them on your side. This confused chop provides for an exhilarating ride and we all were soaked and the boat filled with water by the end of it. Get the bilge pumps! 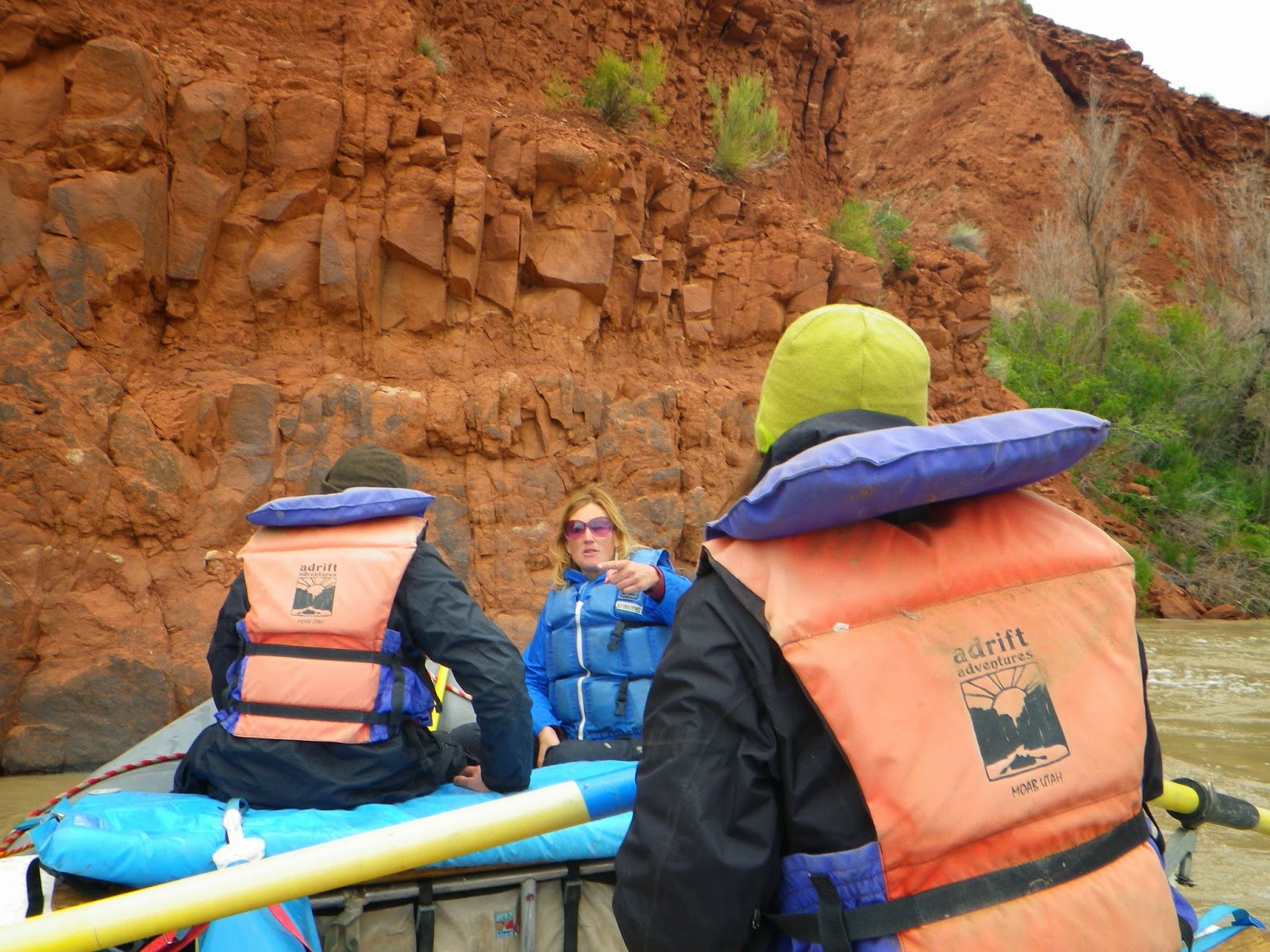 Maggie and Lars both took turns paddling and then Laurel steered us through the last few rapids to our takeout beach. We ran the infamous "Whites Rapid" which was the toughest on our stretch and Laurel had a couple great stories of her boat caught on a boulder as it was deflating. Having to swim at one point to unstick the boat the first time she ever took tourist out. She had run this stretch of the river, "The Daily" over 100 times. 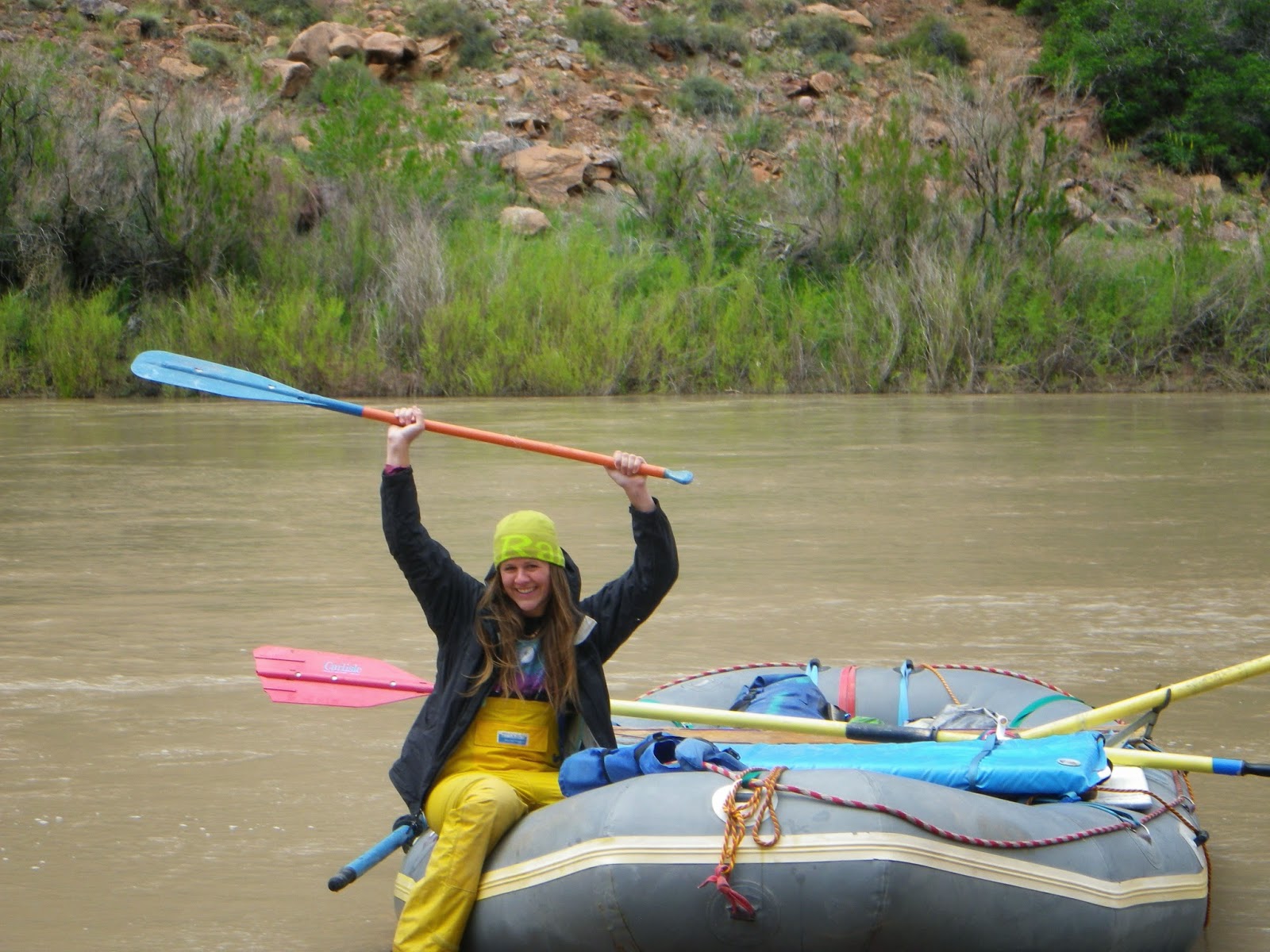 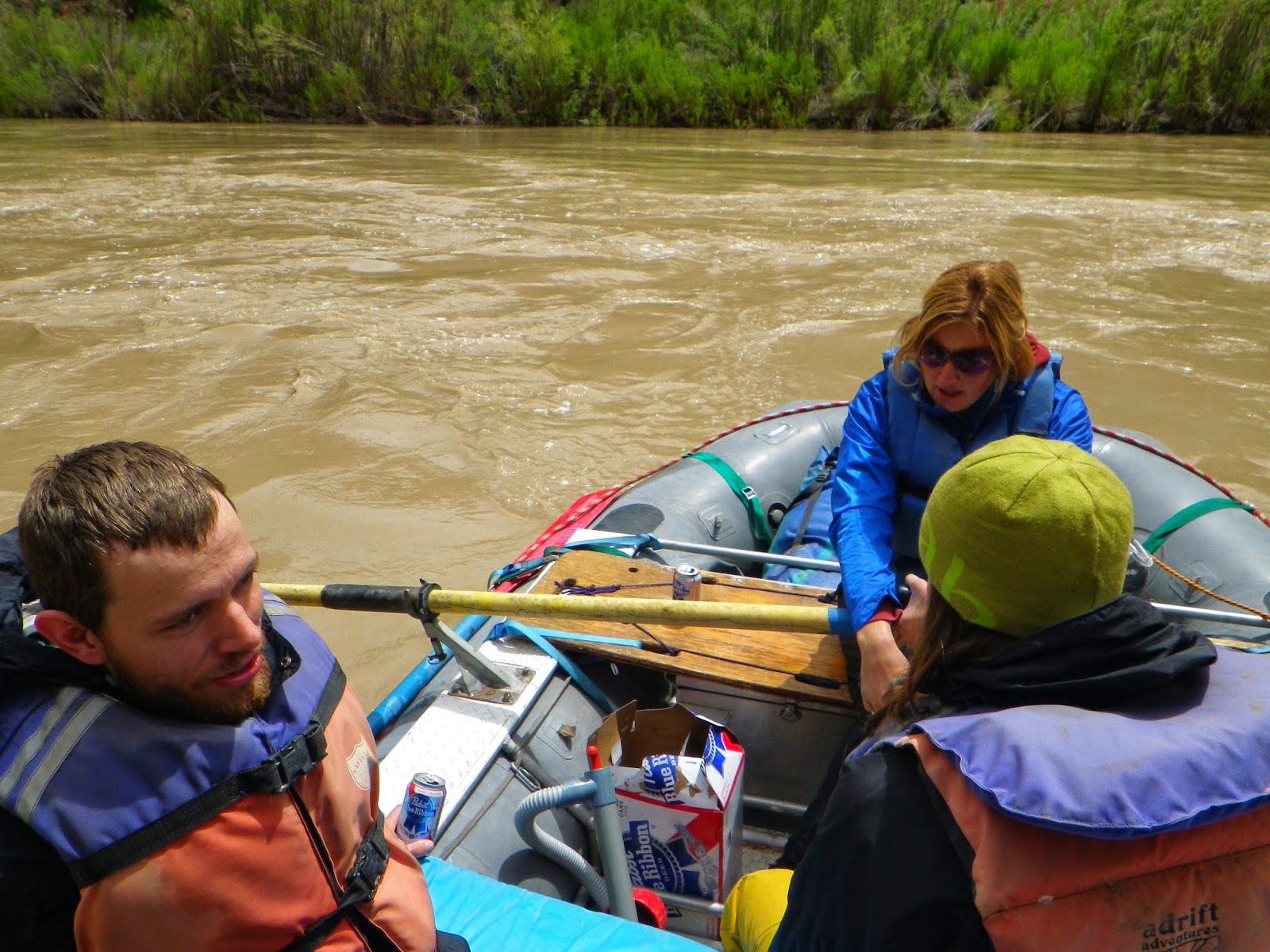 it's a 10 mile long stretch and now, the four of us thoroughly chilled, we were happy to load the boat back up and get back to Moab for some chili cheese fries! Pizza and ice cream. We were completely exhausted! Then we made nachos at home and watched an awesome movie, "The Gods Must Be Crazy". We came to rest in Laurel's driveway again but now it is morning and time to go. Leaving Moab, heading south for a New Mexican adventure. Time to go! 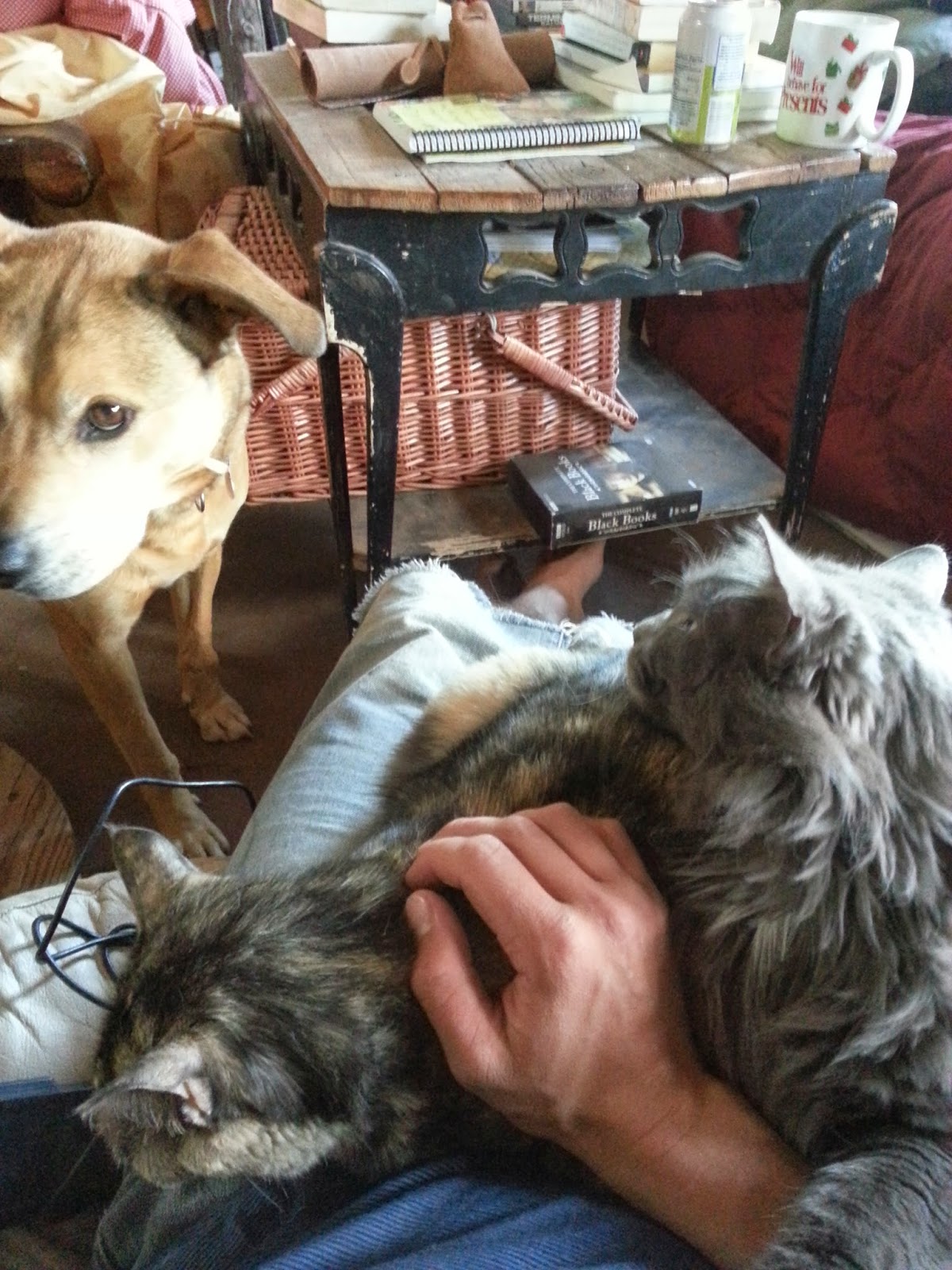