July 26th
it's been a great day today. 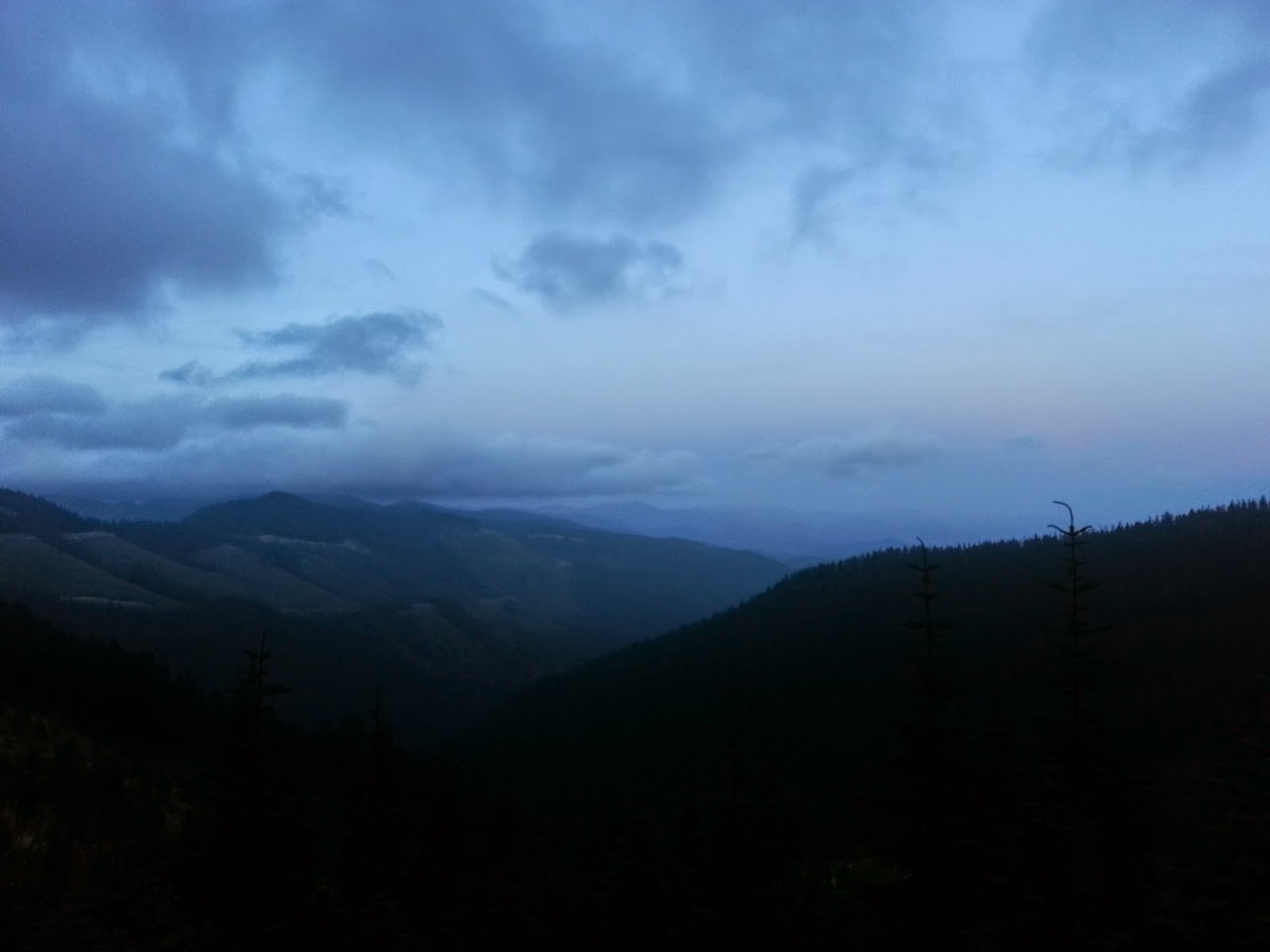 So we got to White Pass, we relaxed for the evening with friends and then camped behind the store. It started raining that night. The next day we thought maybe we'd just hang out and relax around White Pass, it was raining steady and upon checking the forecast it was going to have a hundred percent chance of thunderstorms tomorrow. We thought about our options. We can leave tomorrow and climb up the exposed ridges of Goat Rocks in the lightning, or well, we could sleep behind this wacky gas station again.

So we basically hung out at this little table in the back corner of the gas station. Jes hung out there with us for a long time. Our friends Jacob and Alexis left that morning. Then southbounders Doormouse and Dirt Stew showed up at the Kracker Barrel, we have read their blog. They gave us some peanut butter and then left to tackle Goat Rocks in the rain. Jes also wanted to leave. The lady at the gas station was in just an awful mood and didn't seem to care for us hanging around all day again. Oh well we left and talked on the phone for many hours.

Jes packed up to leave and then the rain downpoured again. Nah, he set his camp back up in the rain and stayed the night. We went and bought some awesome deli sandwiches and even though the lady wasn't pleased with us, she still gave us all the nasty burritos and a bag of chips before kicking us out at closing. I felt so sick that night from eating three burritos.

We woke up late in the morning and Jes was already gone. There was thunder booming and the occasional lighting flash. We wandered the lonely ski condos and quiet highway around White Pass. Then these misty clouds began billowing in through the mountain pass. They tumbled down the highway and floated passed our tent in the meadow. It started to rain one drop at a time. 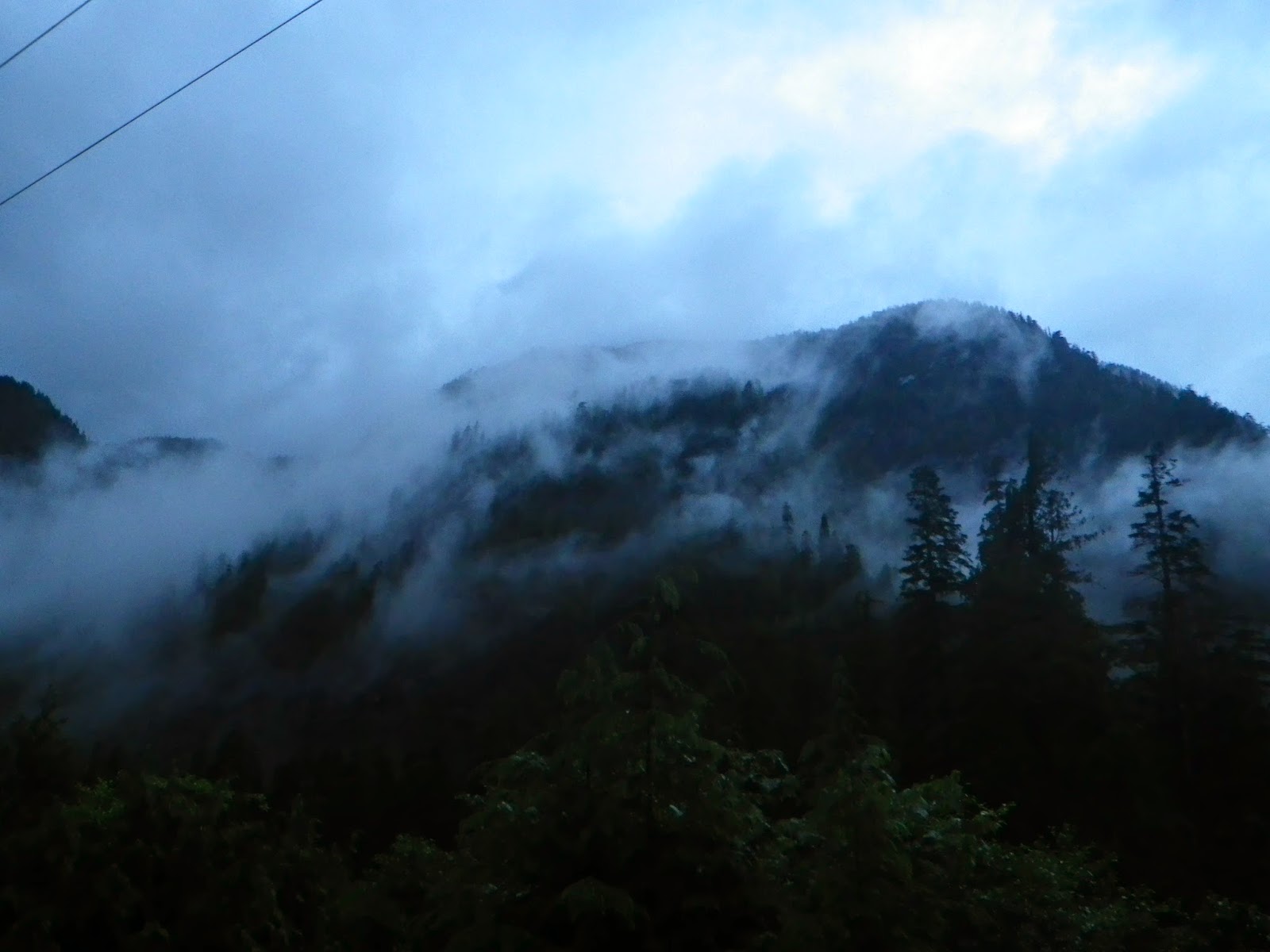 "Let's go back to the Kracker Barrel..." As we were walking there it started to rain more. "Let's run!" I said "I'm not running." Said Maggie. "Ok see ya!" I said and took off! Hah, and then it started raining like crazy and hailing a psycho downpour with lightning and thunder and then she was running too! We both showed up drenched like wet rats to the bitchy lady in the store and went back in our corner. I bought some wheat thins and lemon poppy seed muffins and then she gave us a muffin! She was warming up to us slowly.

We thought about Jes in the rain. We had absolutely nothing to do all day and it just rained and rained and we just sat around. At some point we took a really beautiful walkk up a road around a lake. Then we met Suzanne. She was completely soaked, headed southbound, having hiked 28 miles from Chinook Pass that day to get out of the rain. I shook her hand and it was like a block of ice, she was wet and cold and getting a hotel room! We then met Conner, he had also made it to white pass out of the rain and was getting a room. Both of them solo sobos. Our tent and all our stuff like our food had been staying dry, our tent is wonderful.

So we hung out at the store with Connor and Suzanne until it closed and got more burritos and a half a loaf of bread, that was nice. In the morning of the third day waking up behind the gas station it was still raining steady. Ugggghh Washington was showing its true colors! We had slept for like 12 hours just laying in the tent and sleeping off and on. Now we were back in the Kracker Barrel with Connor and Suzanne but we had packed our things and we're headed out. My pack was extremely heavy with food and dampness. I have so much food. We had made friends by now with the bitchy lady and I bought two slices of pizza and she gave me a third and two more muffins! That makes a total of 5 muffins that have been given to us from strangers so far on the PCT. Chocolate, 2 blueberry, cinnamon, and lemon poppy seed. And they've all been the same Costco type brand. At least one muffin at each resupply...

Anyway, Connor let us come into his room and take showers! Yay! The crazy old British through hiker from Mexico, Phantom of the Raspberry Blower, gave Connor the trail name Tribal. Then we headed off into the spitting drizzle. We walked a little ways down the highway before Maggie realize her wallet was gone. We had to turn back, looked all through Connor's room, and eventually it turned out in her backpack. Oops! Off we went again into that clammy miserable rain. Into the Goat Rocks wilderness. Maggie was nervous about the Goat Rocks, I was uncertain. It was late in the day, I was having a lousy day.

We scrambled up this hill side, it was wet and miserable too. Trees were down everywhere and were difficult to climb around. We weren't feeling it so we stopped and camped after 2 miles. There were more mosquitoes there than anywhere else. Ever in my life. They were biting me through my head net. For the first time on this trip or on the road trip I couldn't make a fire. We turned in for bed at 5:30 and just watched the mosquito is on the tent screen. We slept for 14 hours off and on, tossing and turning. My down bag very damp by now, I was cold all night. It was a cold clammy night.

In the morning the Sun came out. The forest was muddy and misty and green. The mosquitoes incredible for a few miles and then were no more. There was no cloud in the sky. As we climbed we saw Rainier, giant and shining in the morning light. 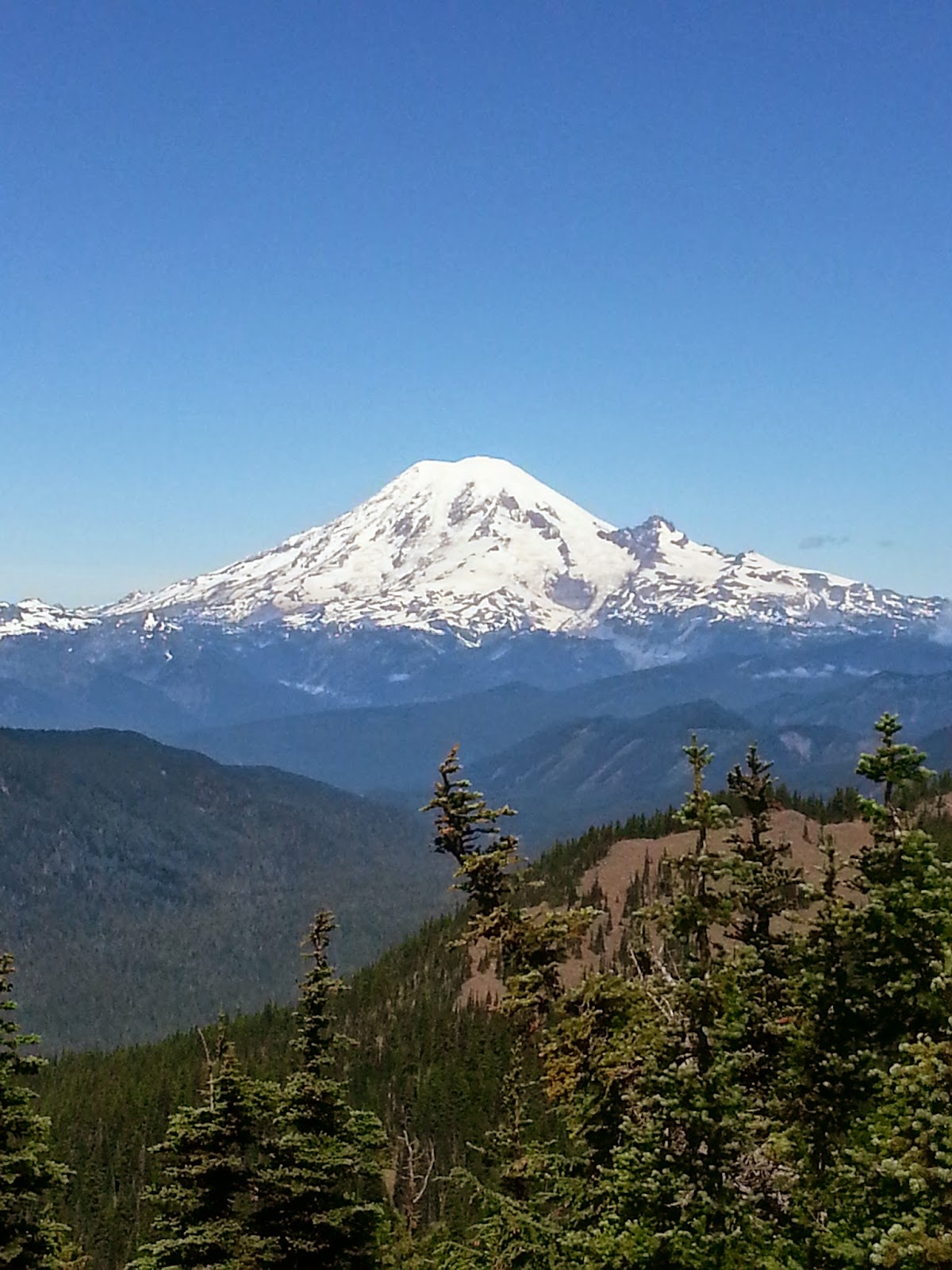 It was such a beautiful day. We still only hiked 10 miles and then camped, laid everything out to dry in the sun, it felt so good. The storm had passed. Our down bags fluffed up and warmed. Who did we see next show up at our camp but Suzanne, and then Connor not far behind. The four of us camped together and had a wonderful night, visiting vehemently for hours. 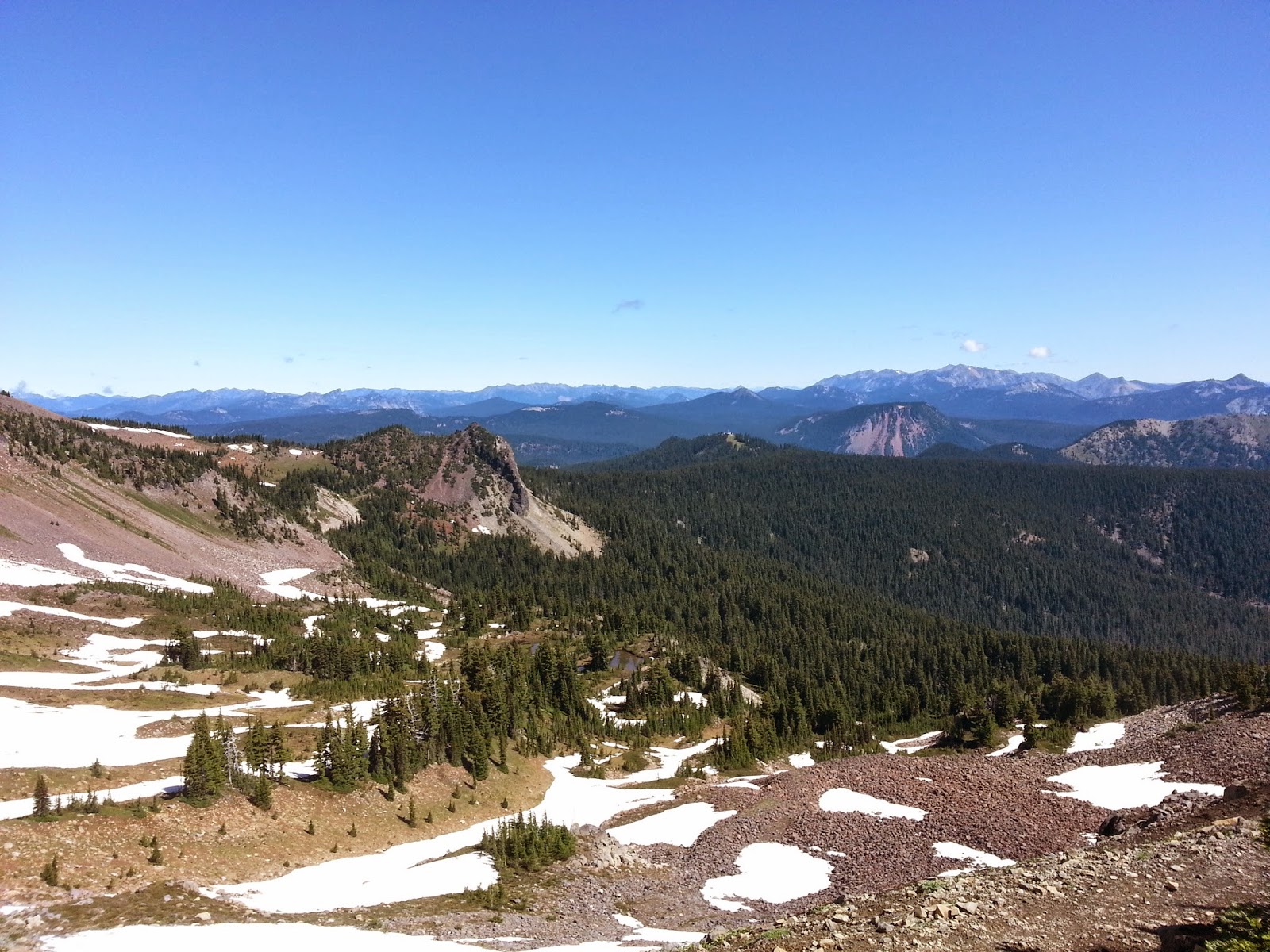 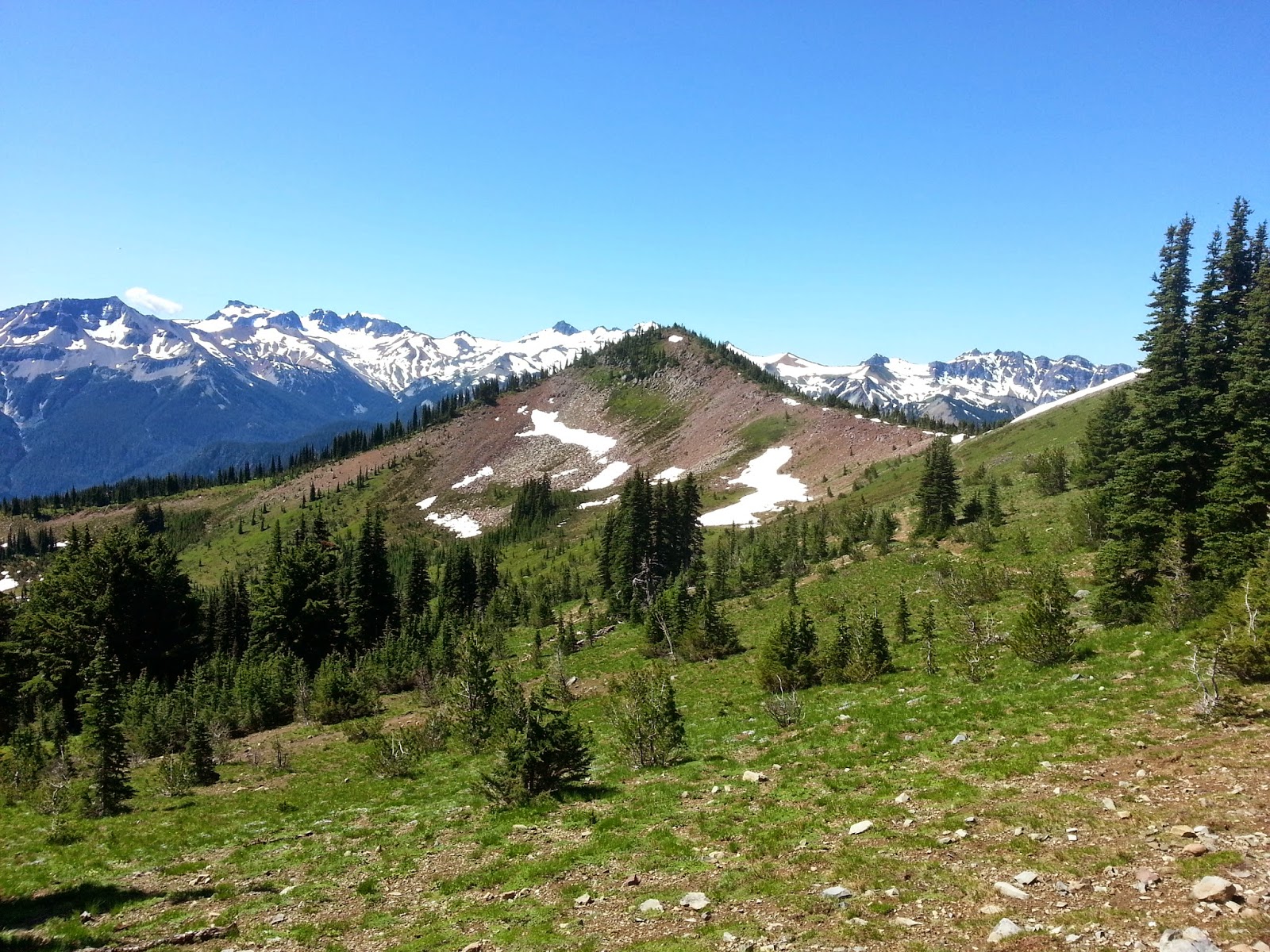 Then today was just as beautiful, not a cloud. Connor joined our team as we were hoping. He's a novice mountaineer from Wisconsin and we thought it was a good idea to tackle these Goat Rocks together that we had heard many a bad report about. We climbed up very steeply. We were in awe the whole time. 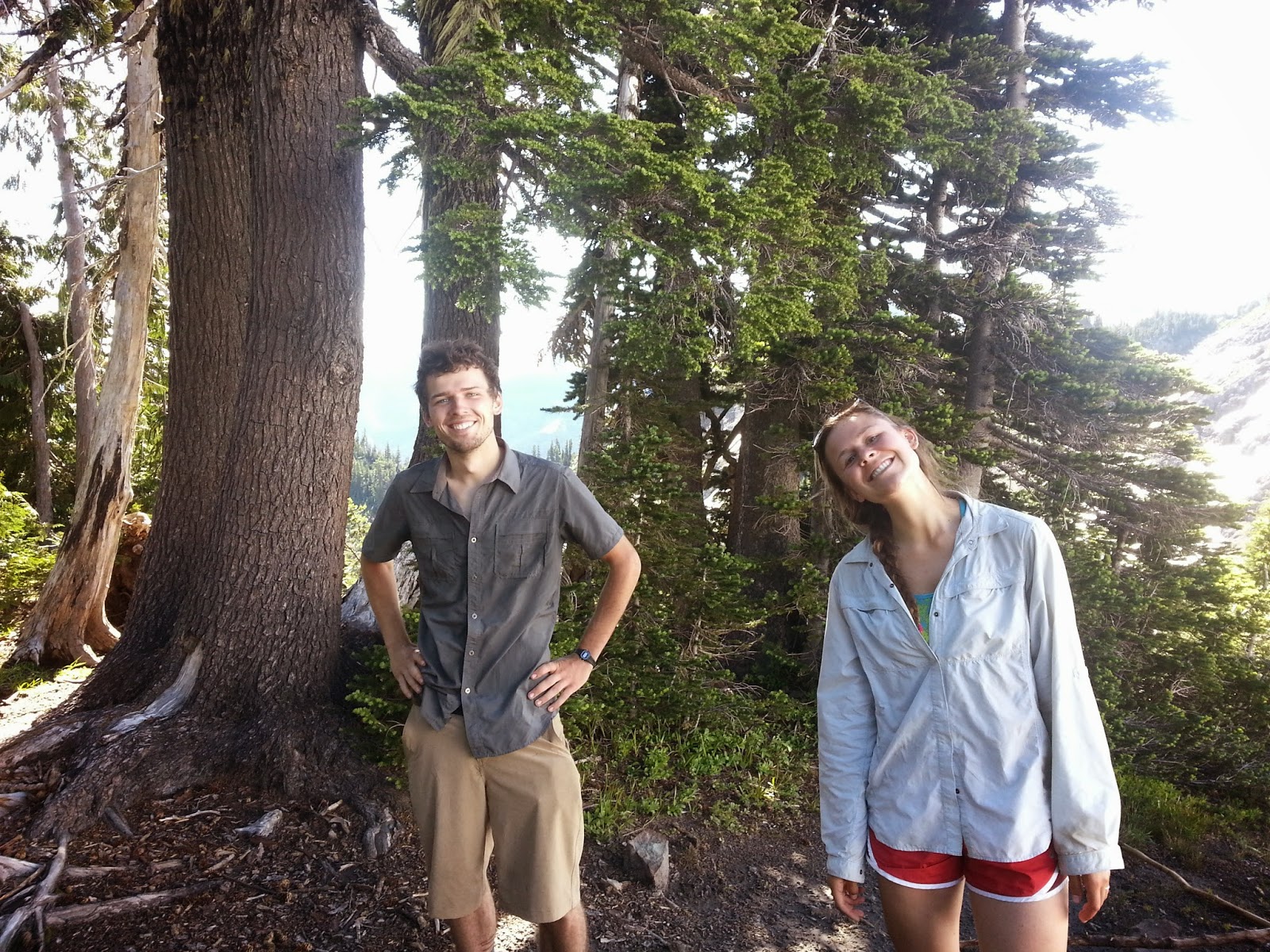 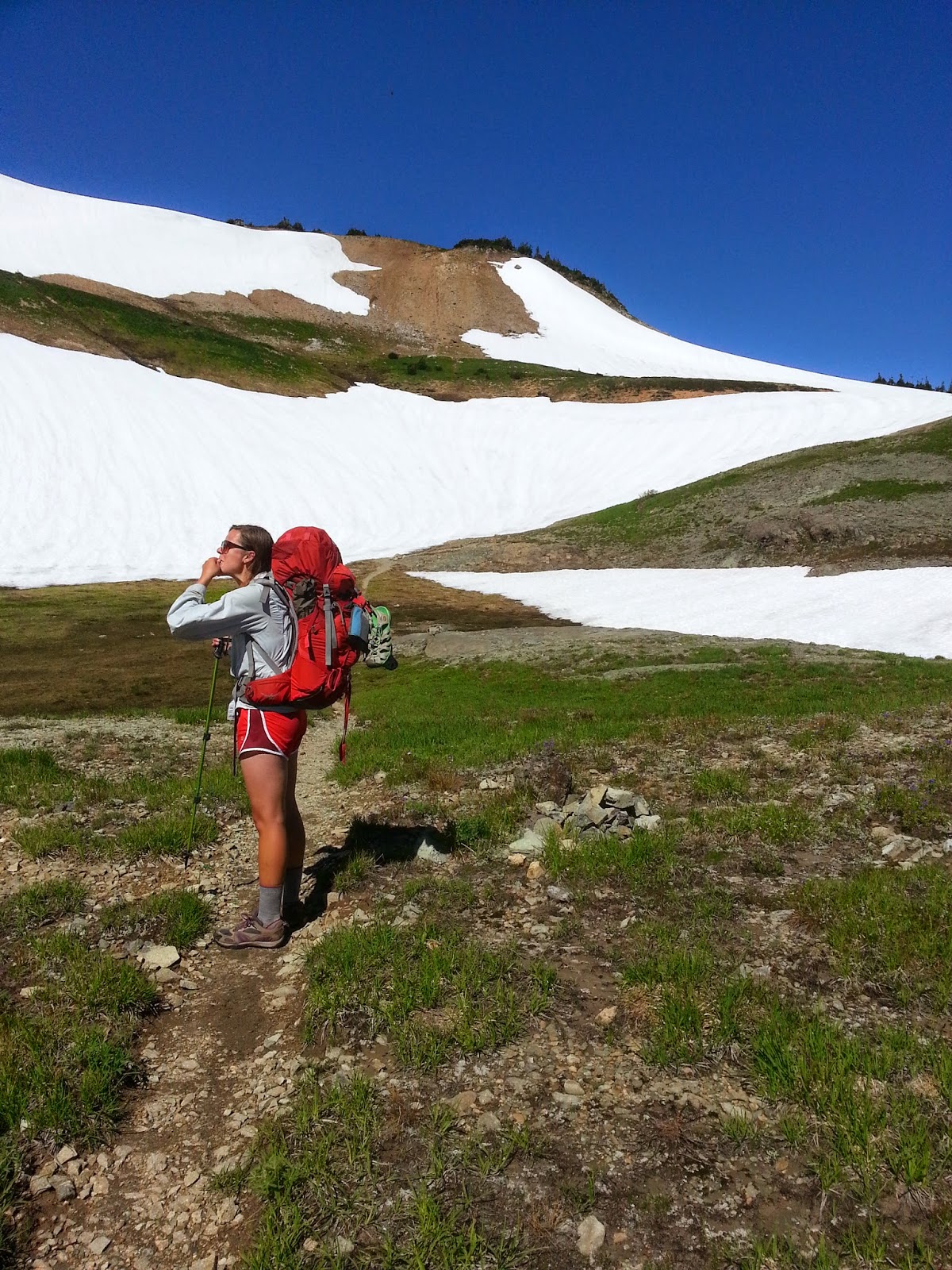 We were in the alpine zone all day. 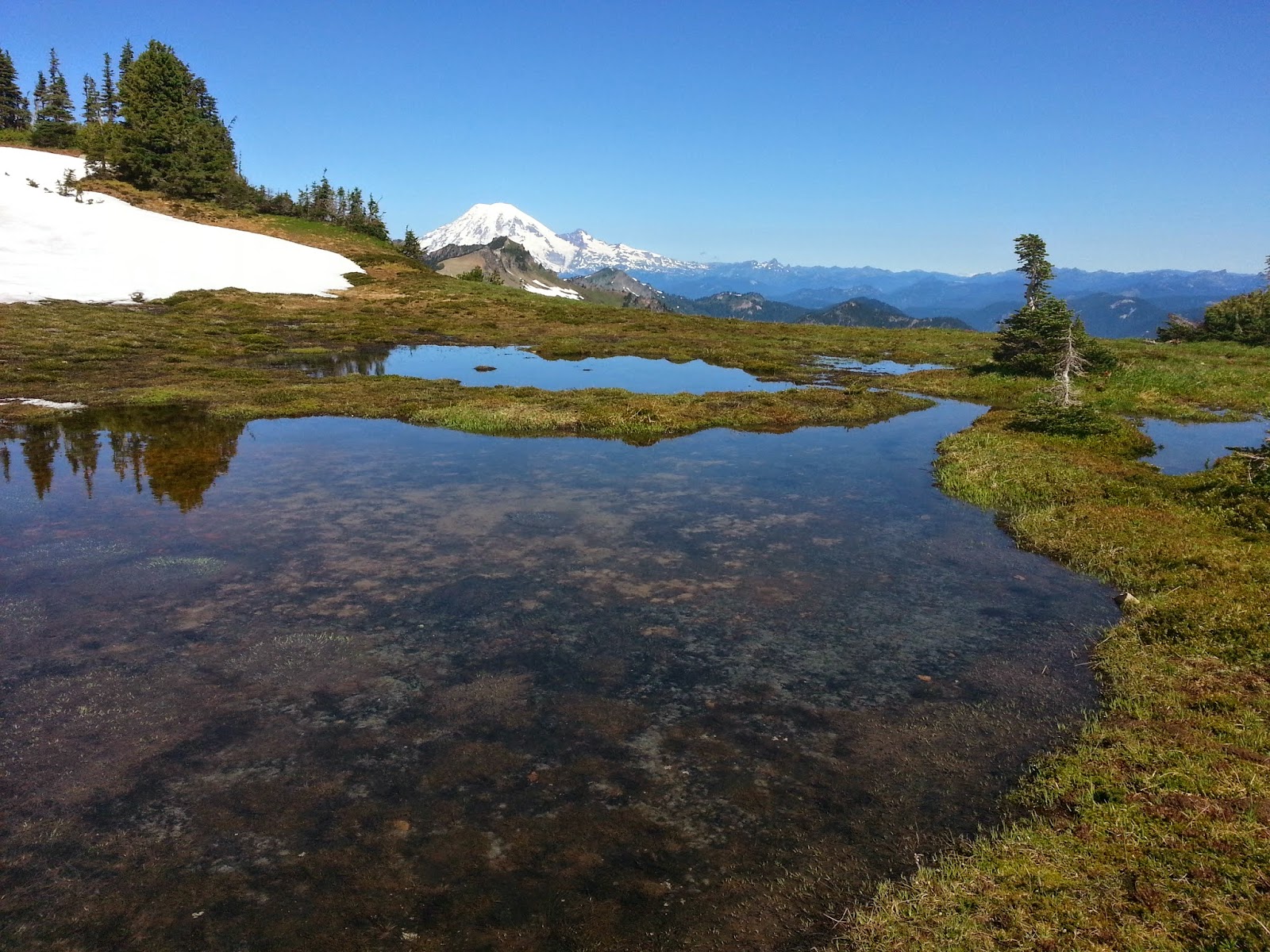 It was warm and sunny with a cold breeze and snow everywhere. 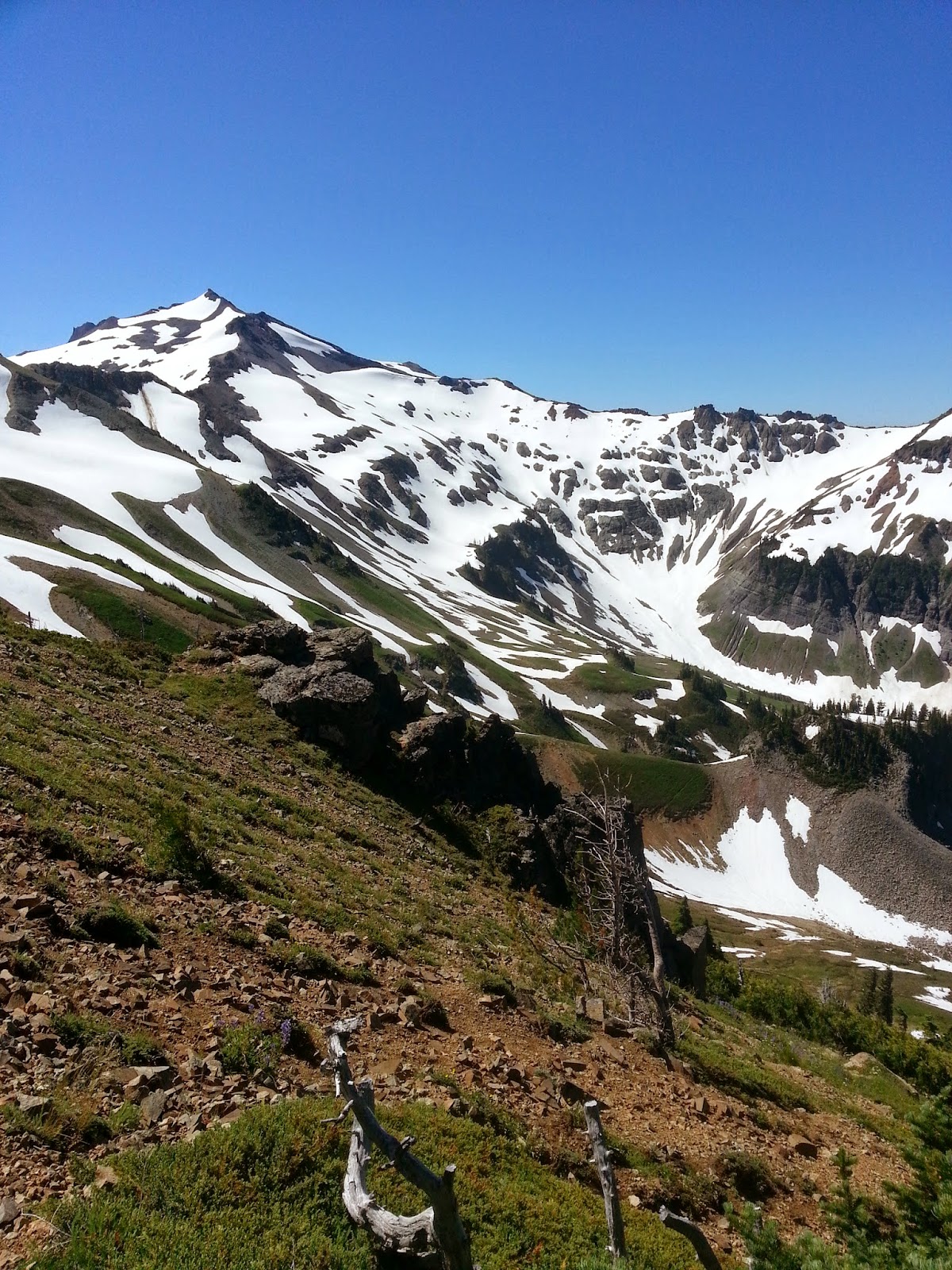 The trail was mostly snow free. We've successfully waited it out. Our patience paid off today, we were glad we sat around White Pass, everything was glorious. 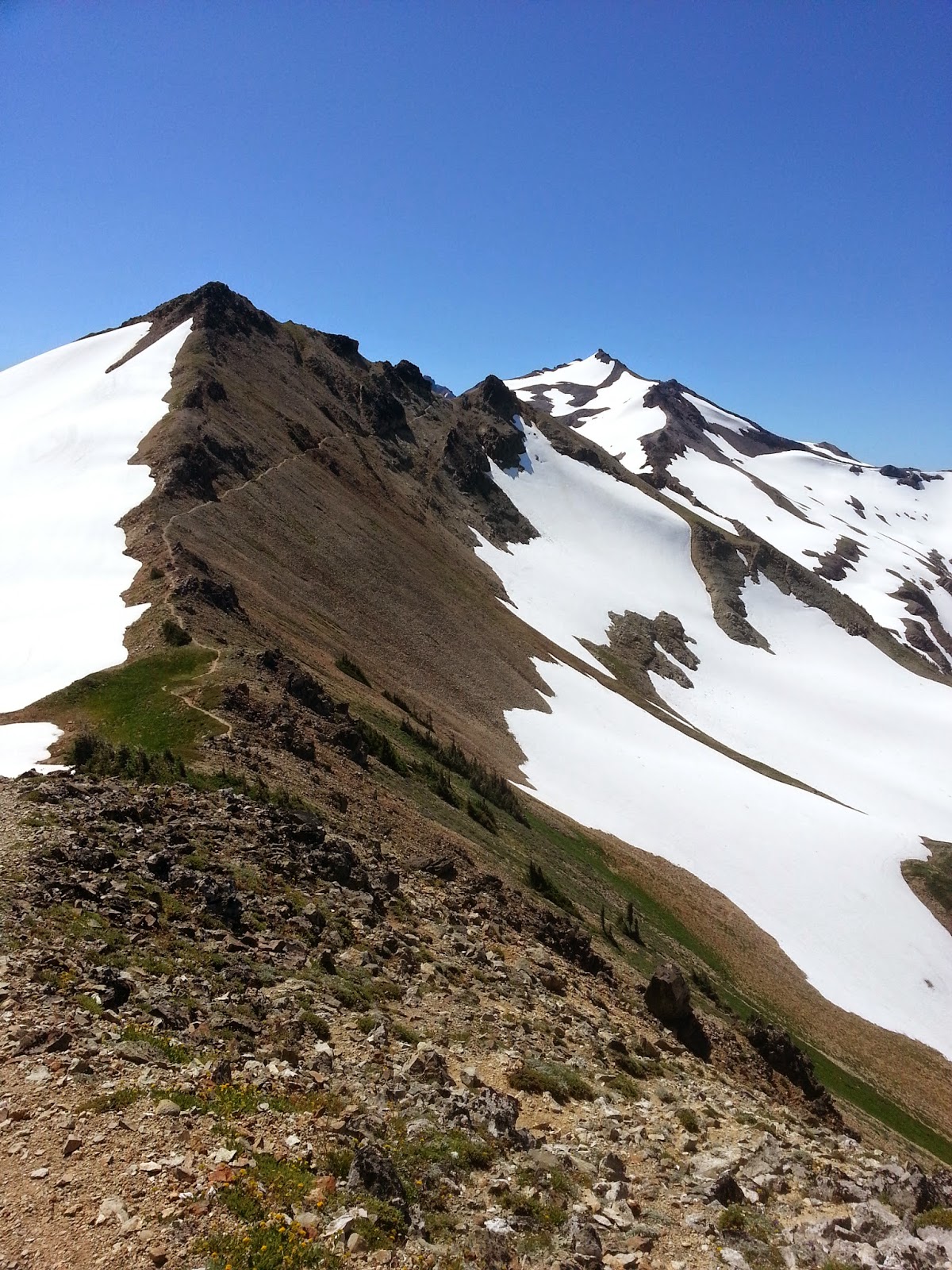 Rainier was bold and showy. 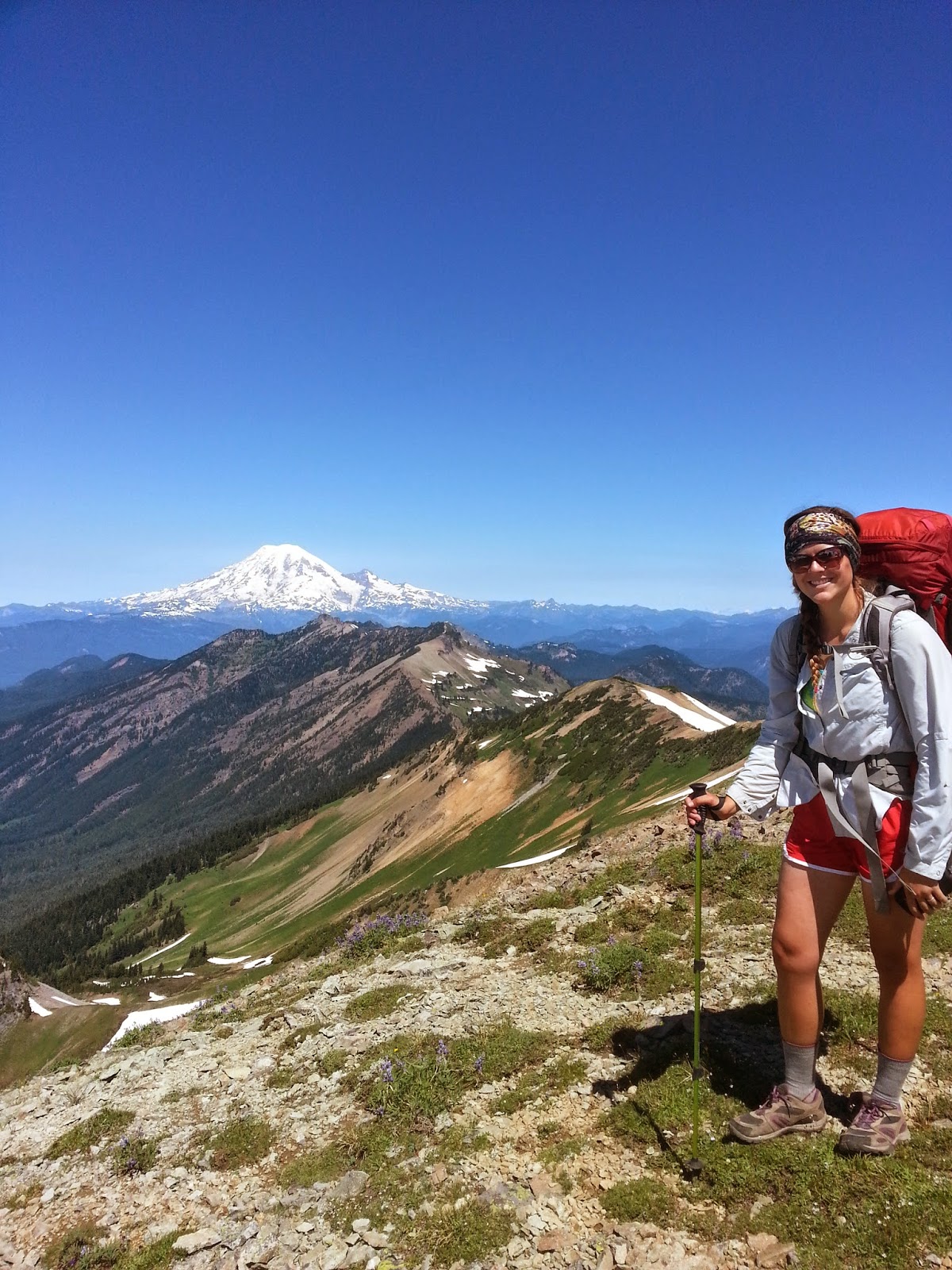 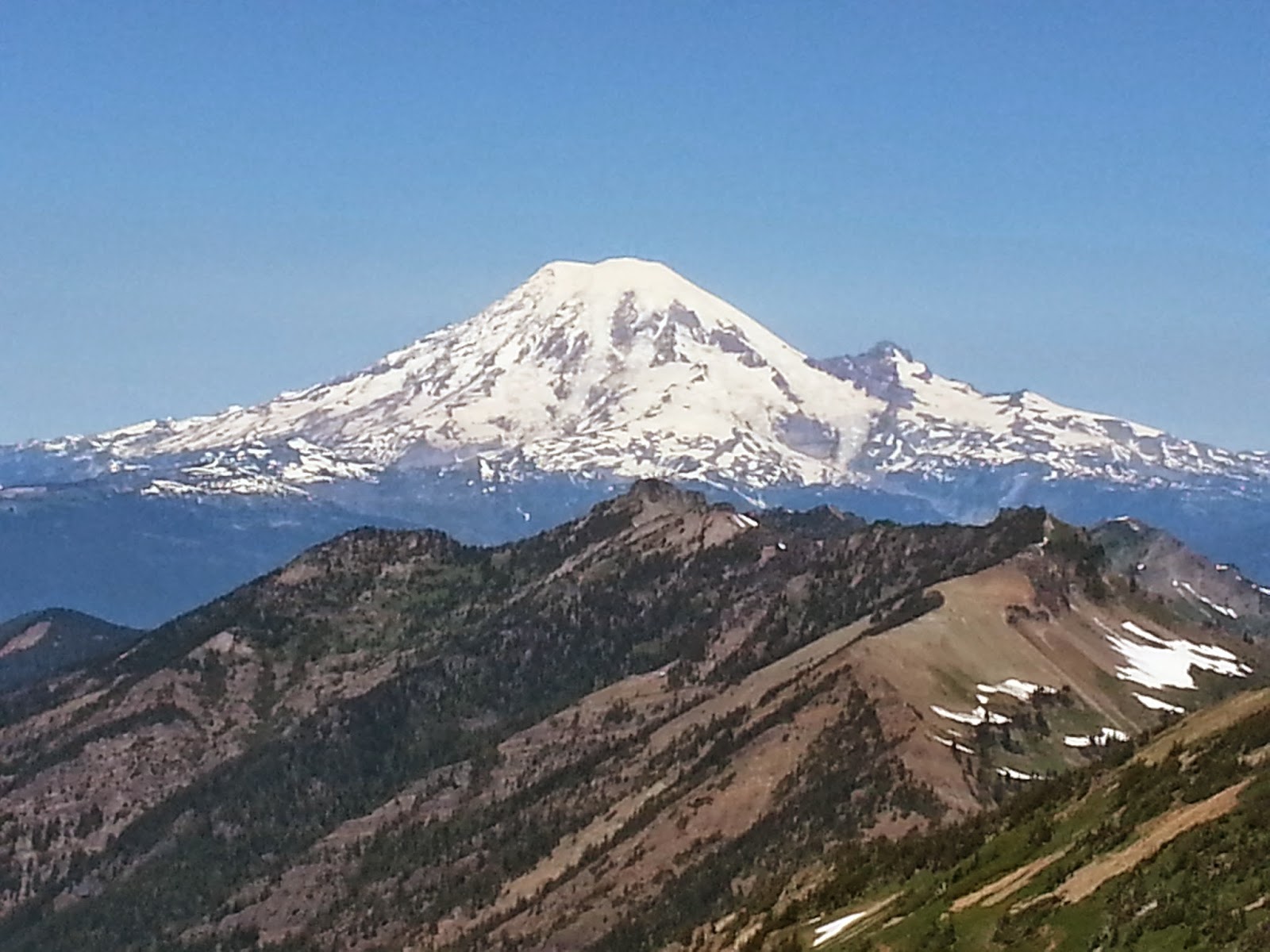 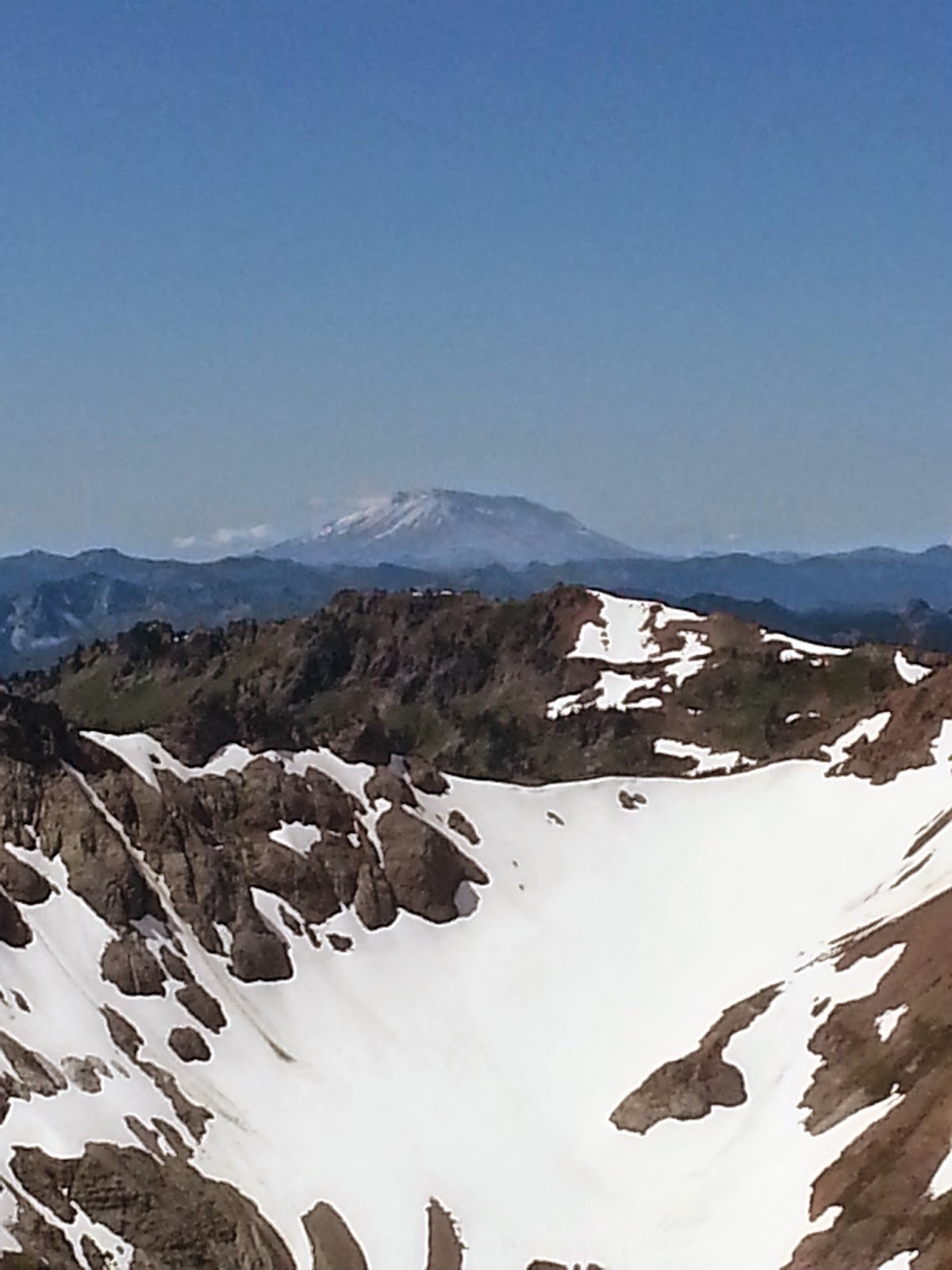 We climbed up onto the jagged rocky backbone and traversed between rocks that jutted out like fingers from the mountain. 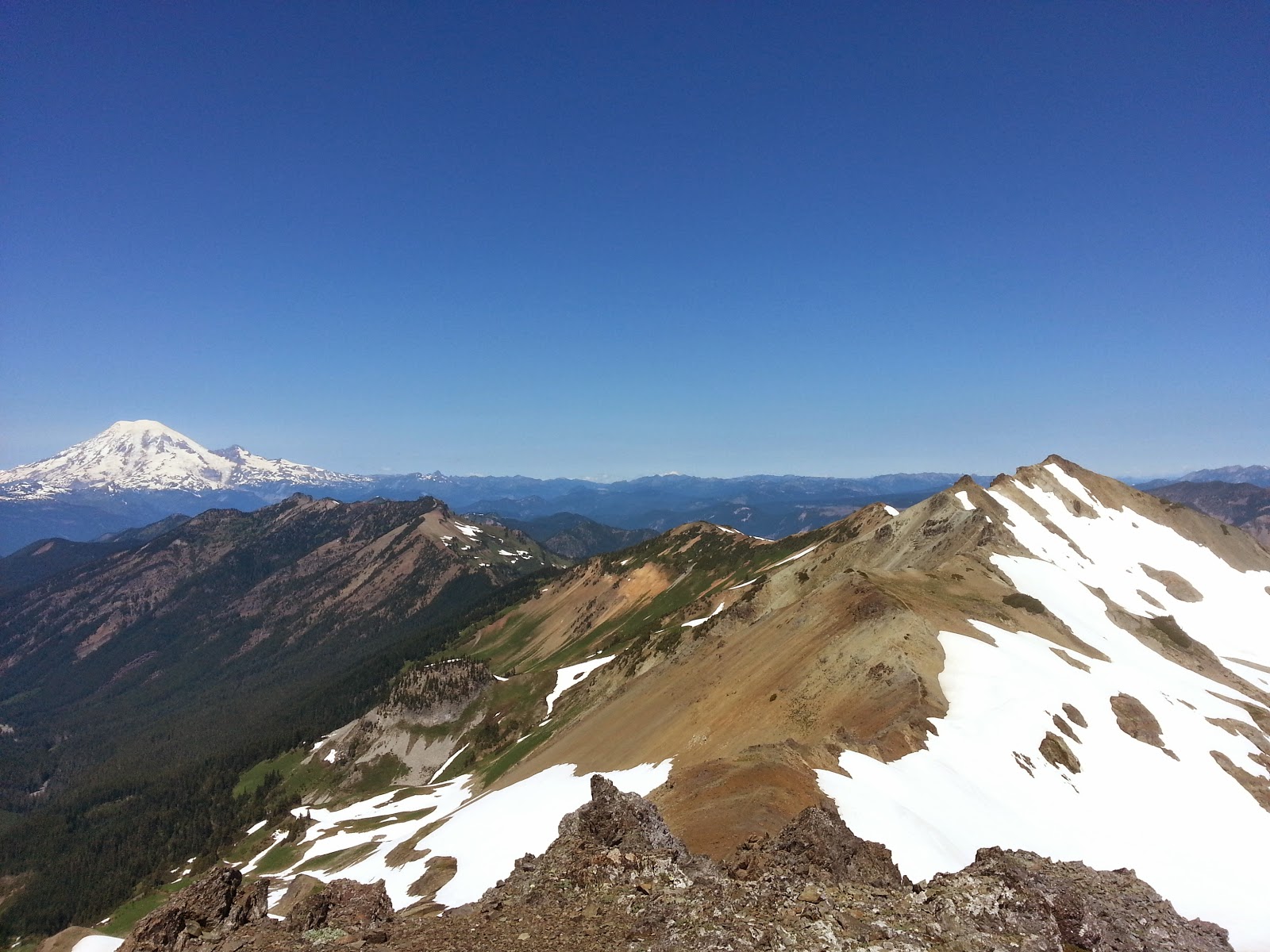 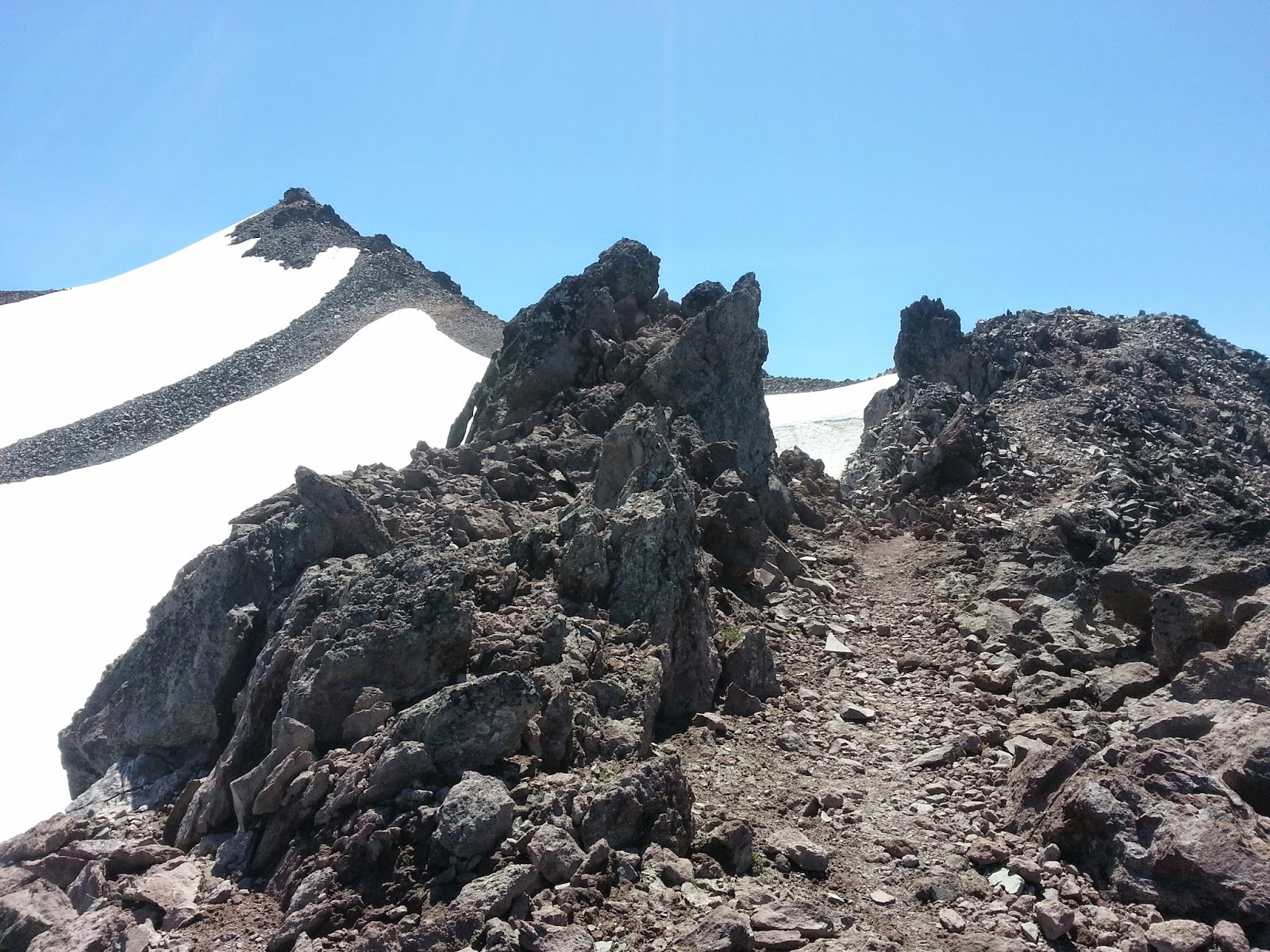 Then we climbed up and around the Packwood glacier, past the mountain "Old Snowy", and on a whim, summitted Old Snowy. Mount Adams appeared before us, just as large and grandiose as Rainier, like his brother. 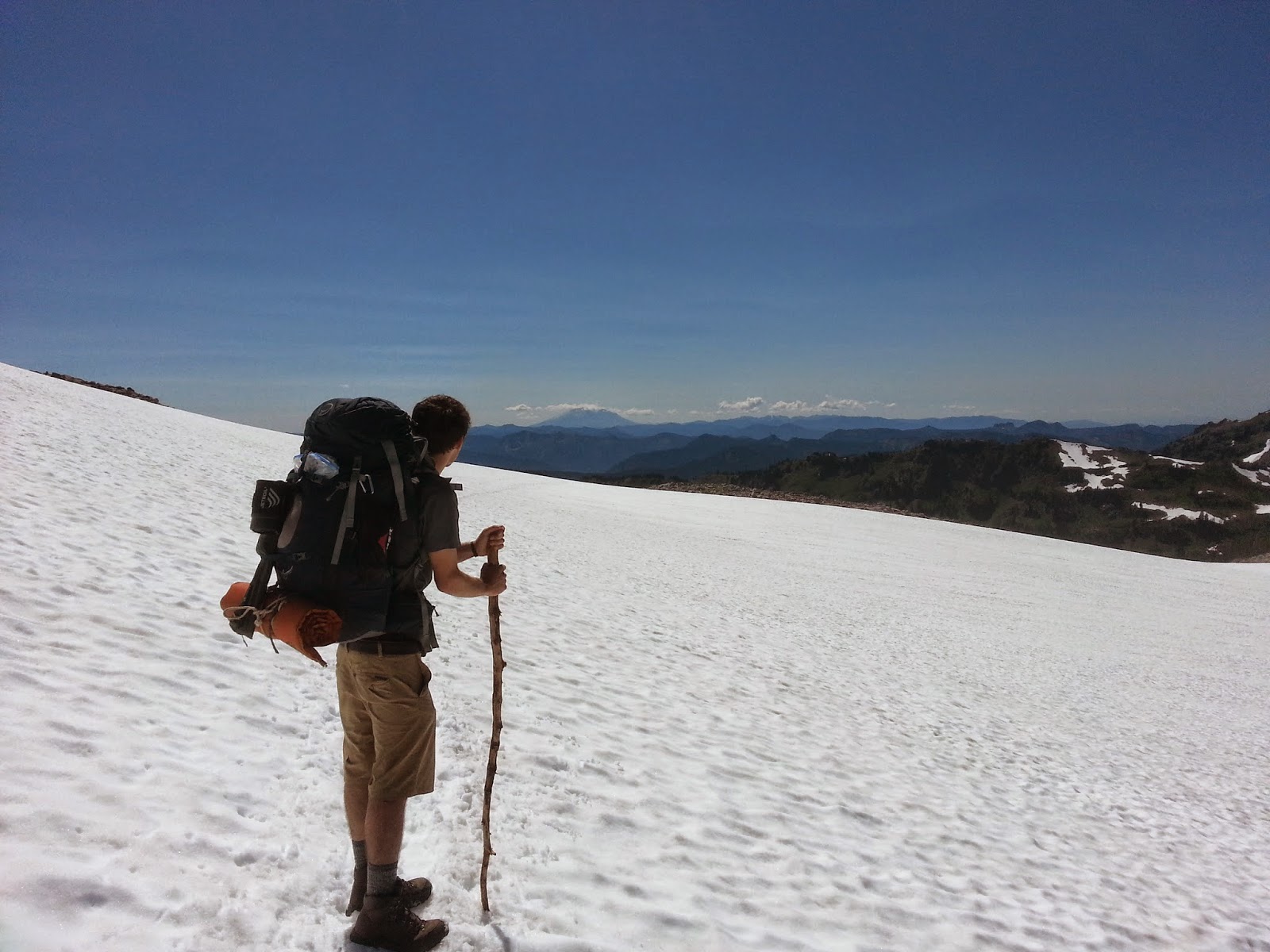 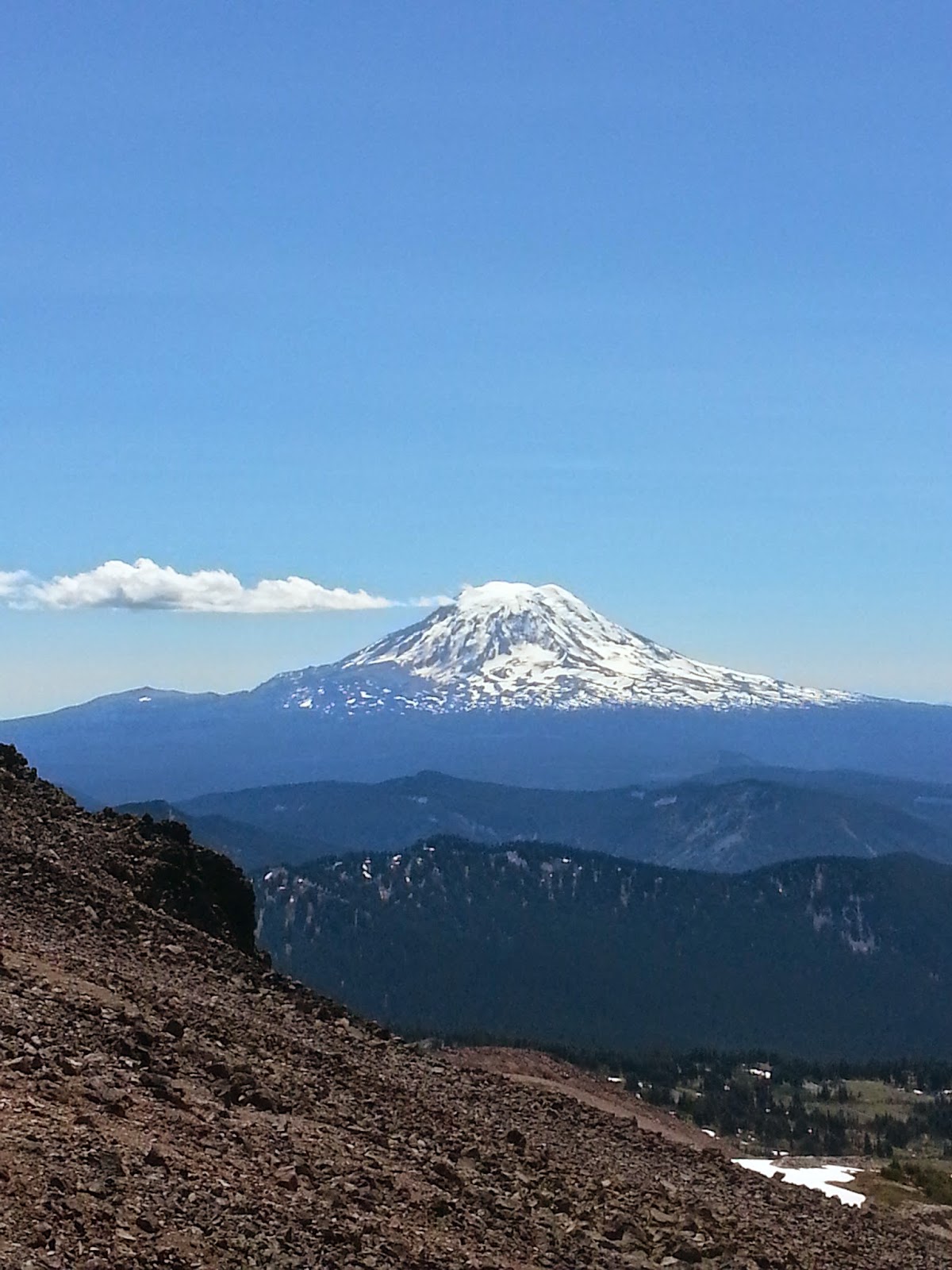 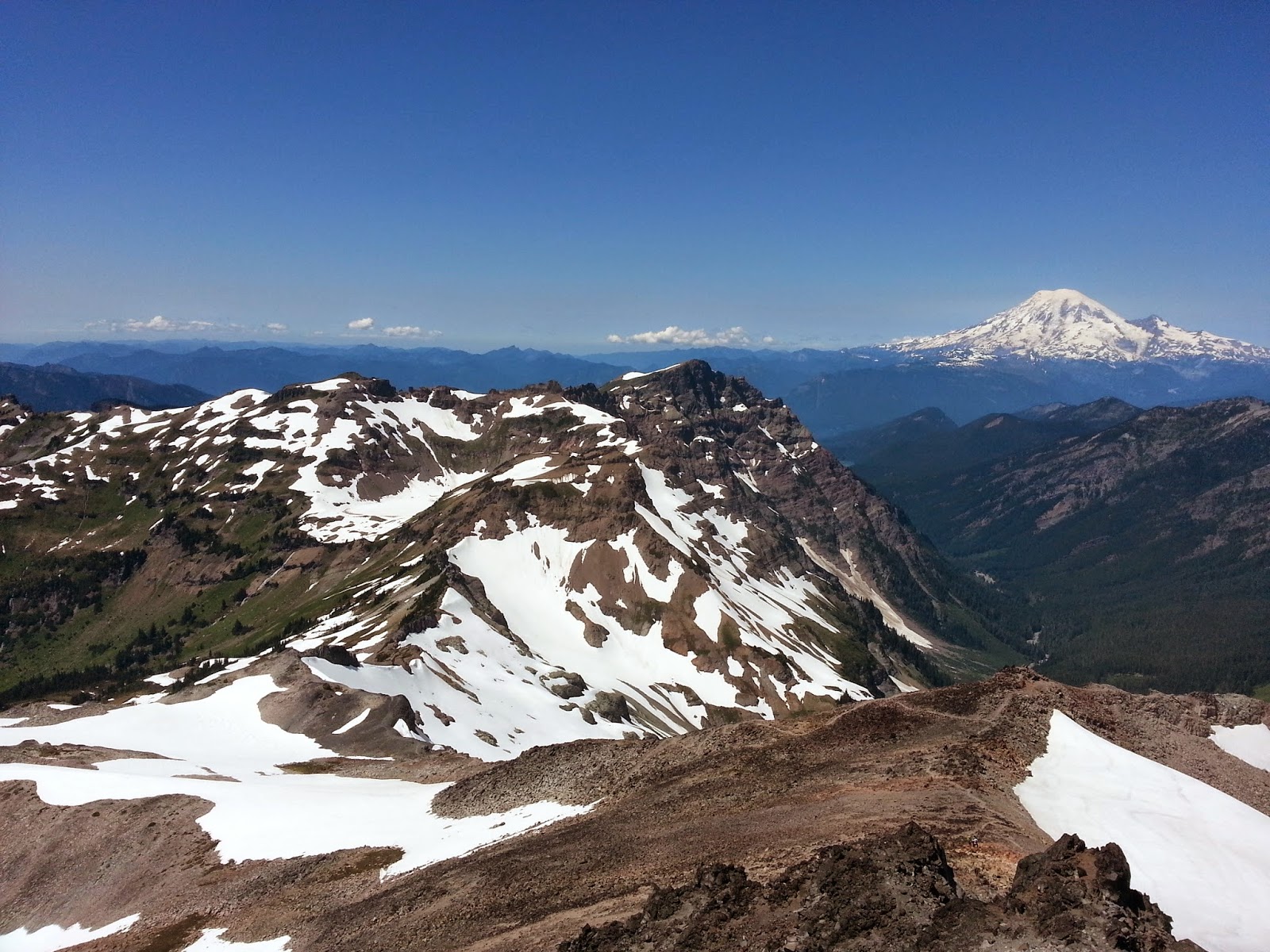 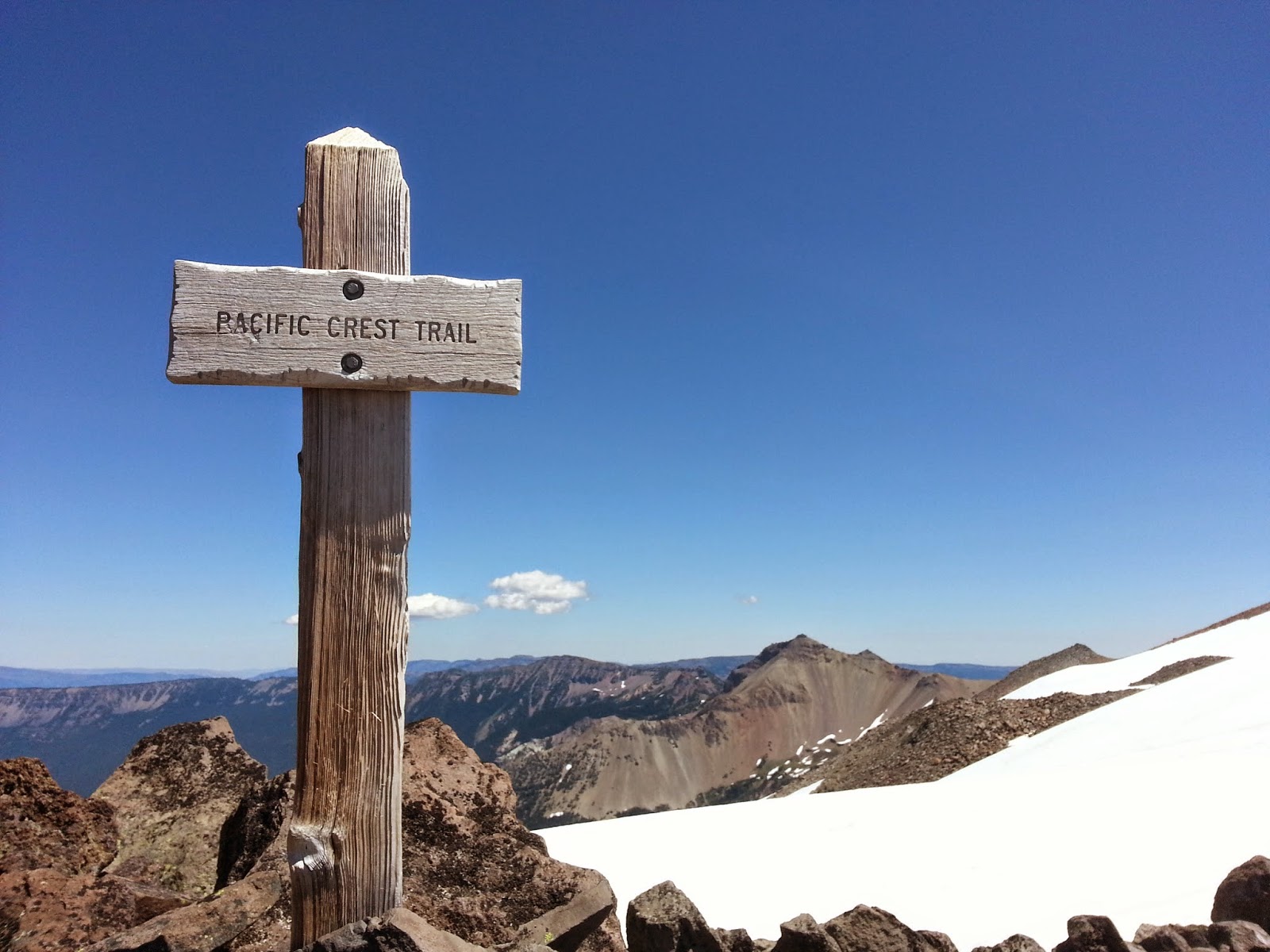 All of Cascadia lay before us, the North Cascades that had challenge of 22 days before peeked out of a distant horizon. Adams, St. Helens, and Rainier, the volcanoes, showed us their personalities. Mount Hood was concealed behind Adams but Oregon laid in the distance. It was the first time Connor summitted a mountain and what an epic one, we were happy to be with him for that. 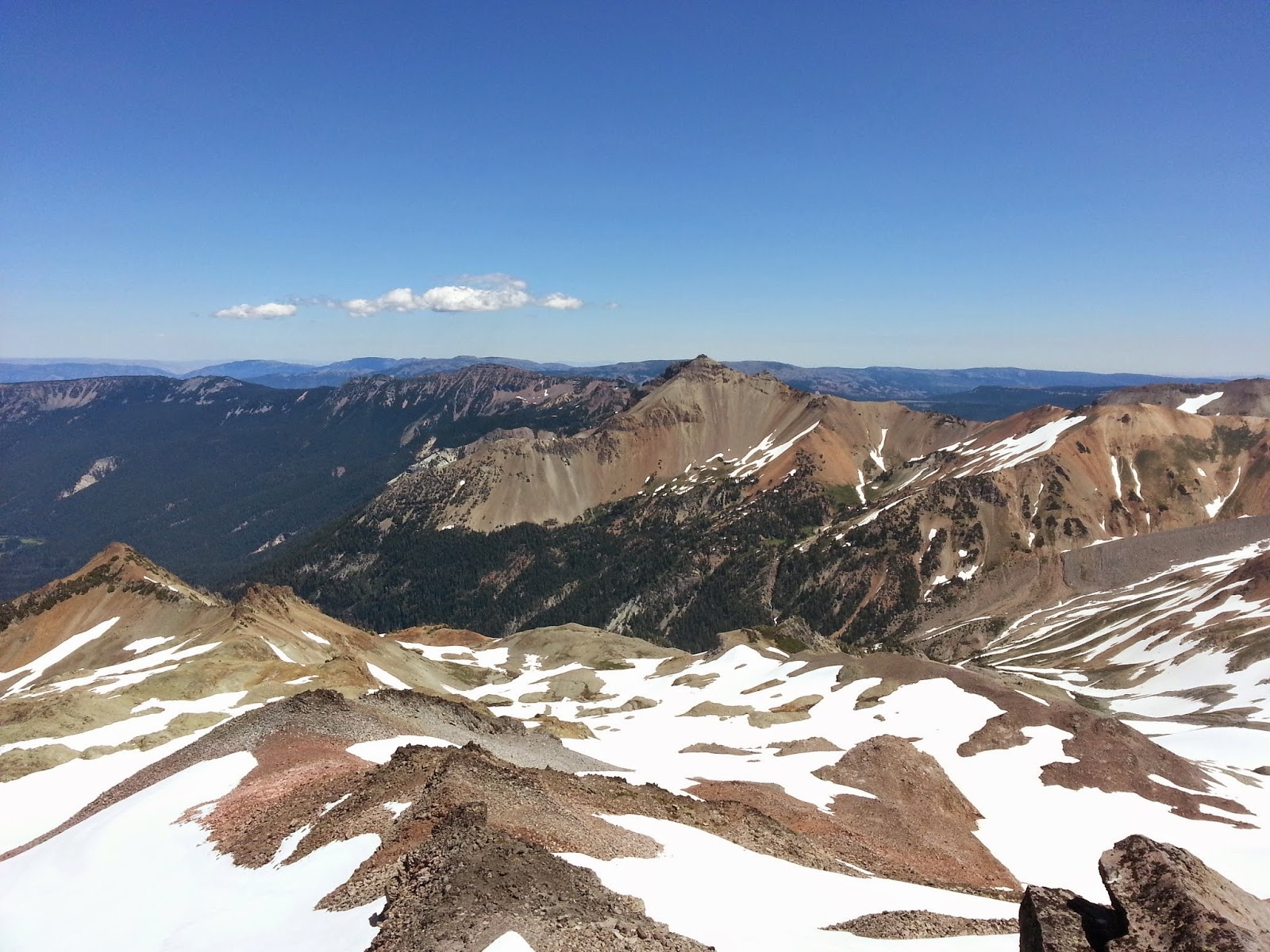 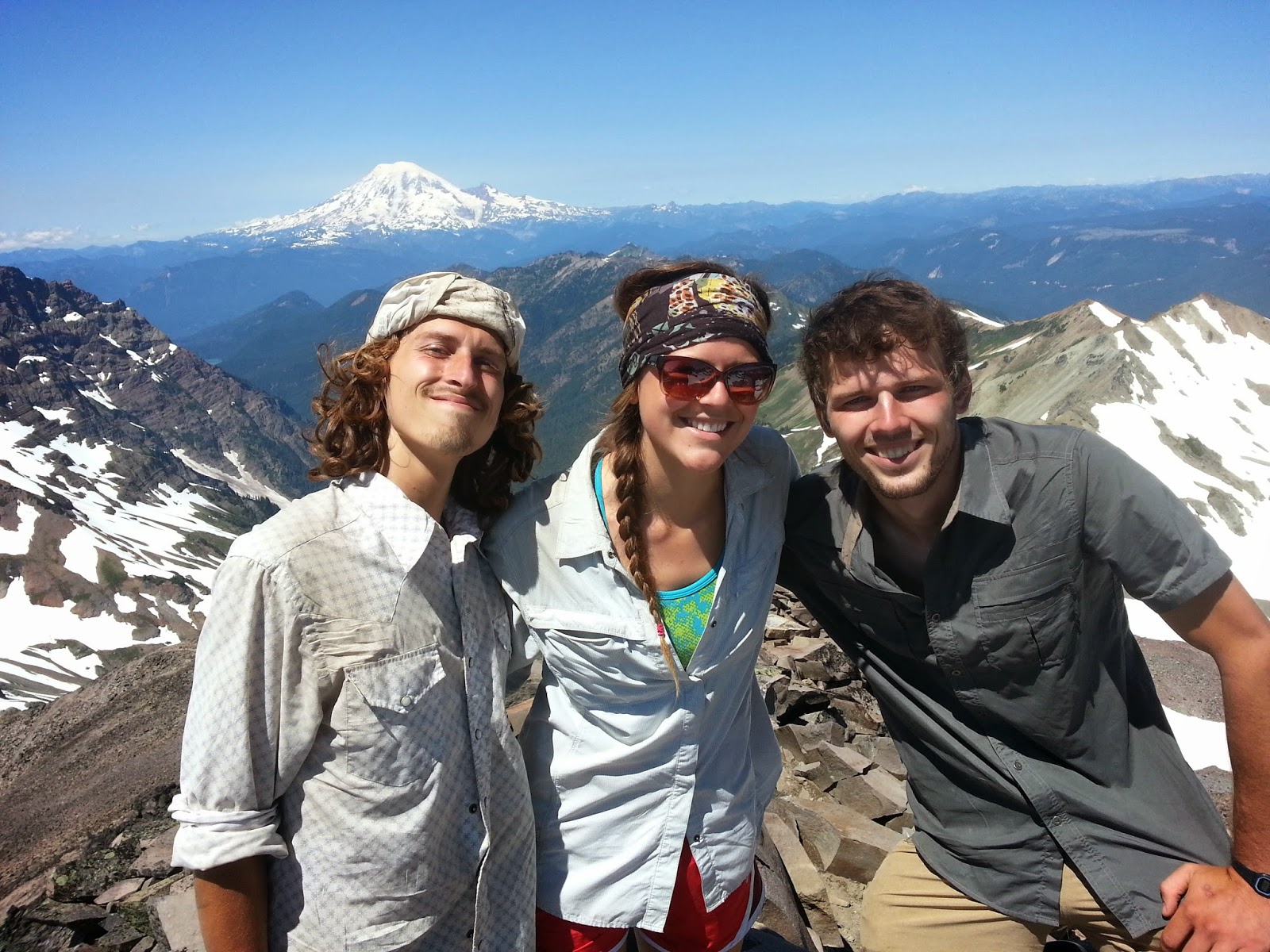 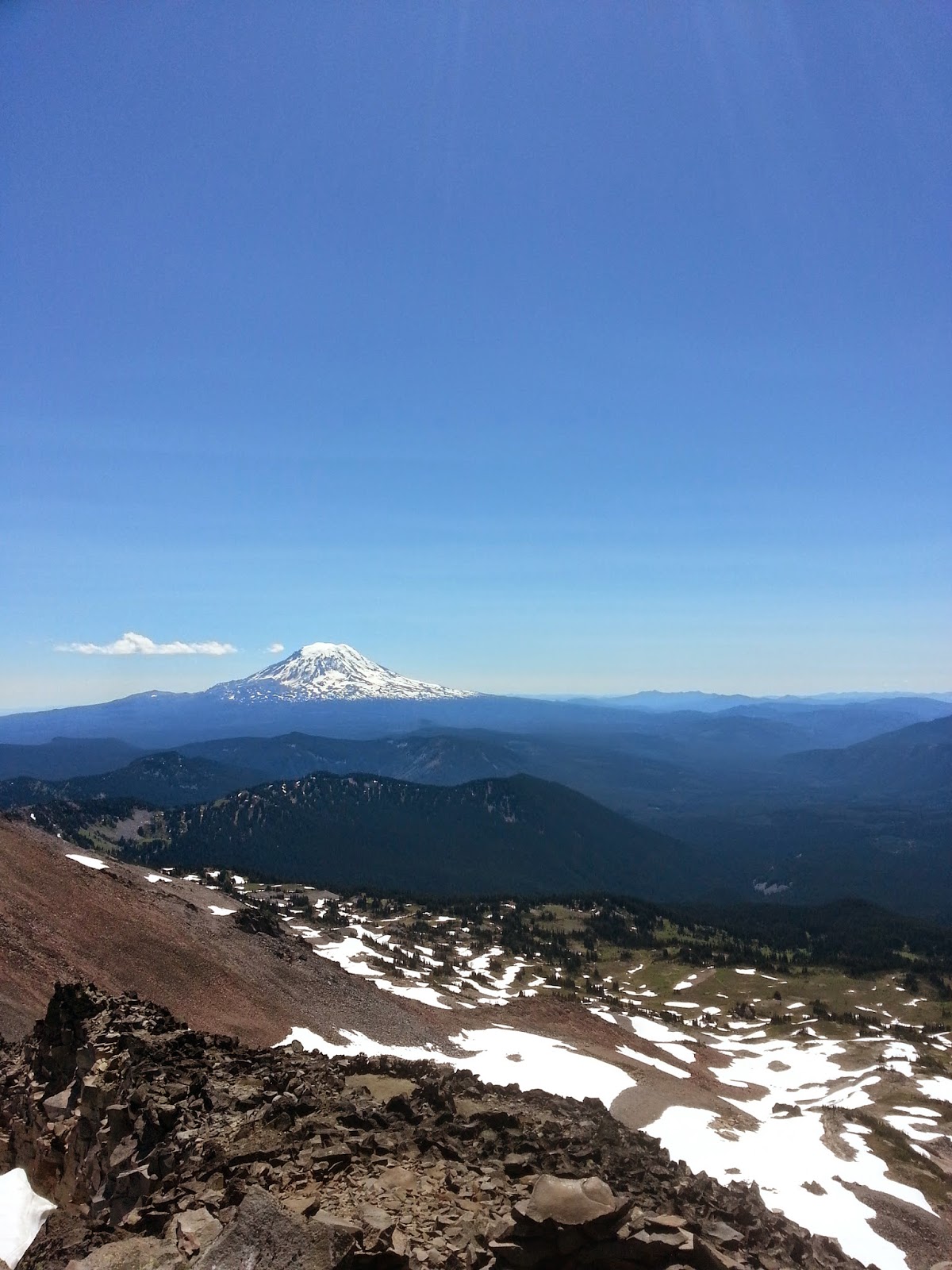 It had been the best day ever and we camped in a beautiful alpine area called Snowgrass Flat. Its the best camp spot I've ever stayed at before in my life. There's snow and grass but its warm and sunny and clean. A perfect little stream, flowers and small pine trees and an outstanding view of Adams. 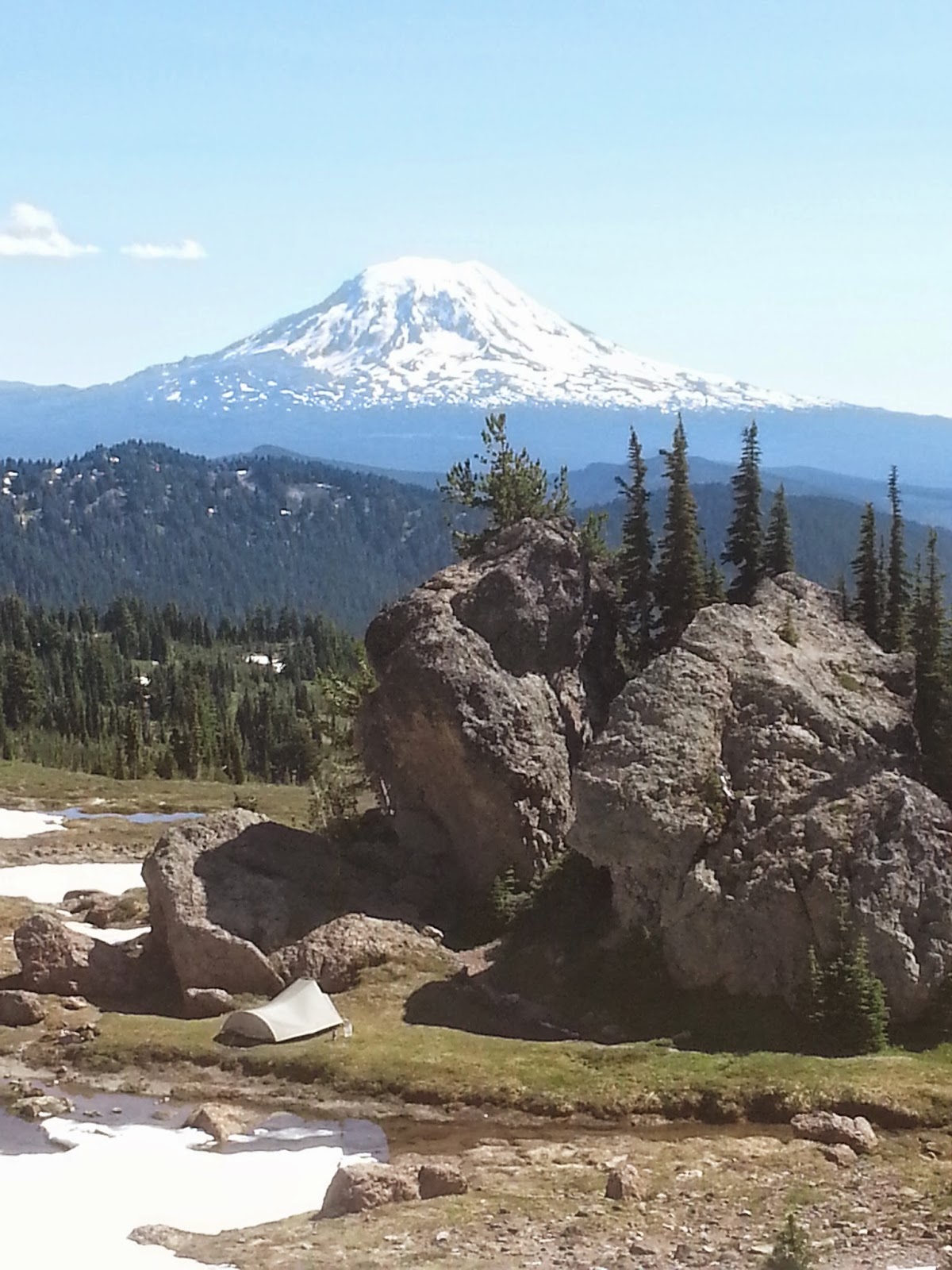 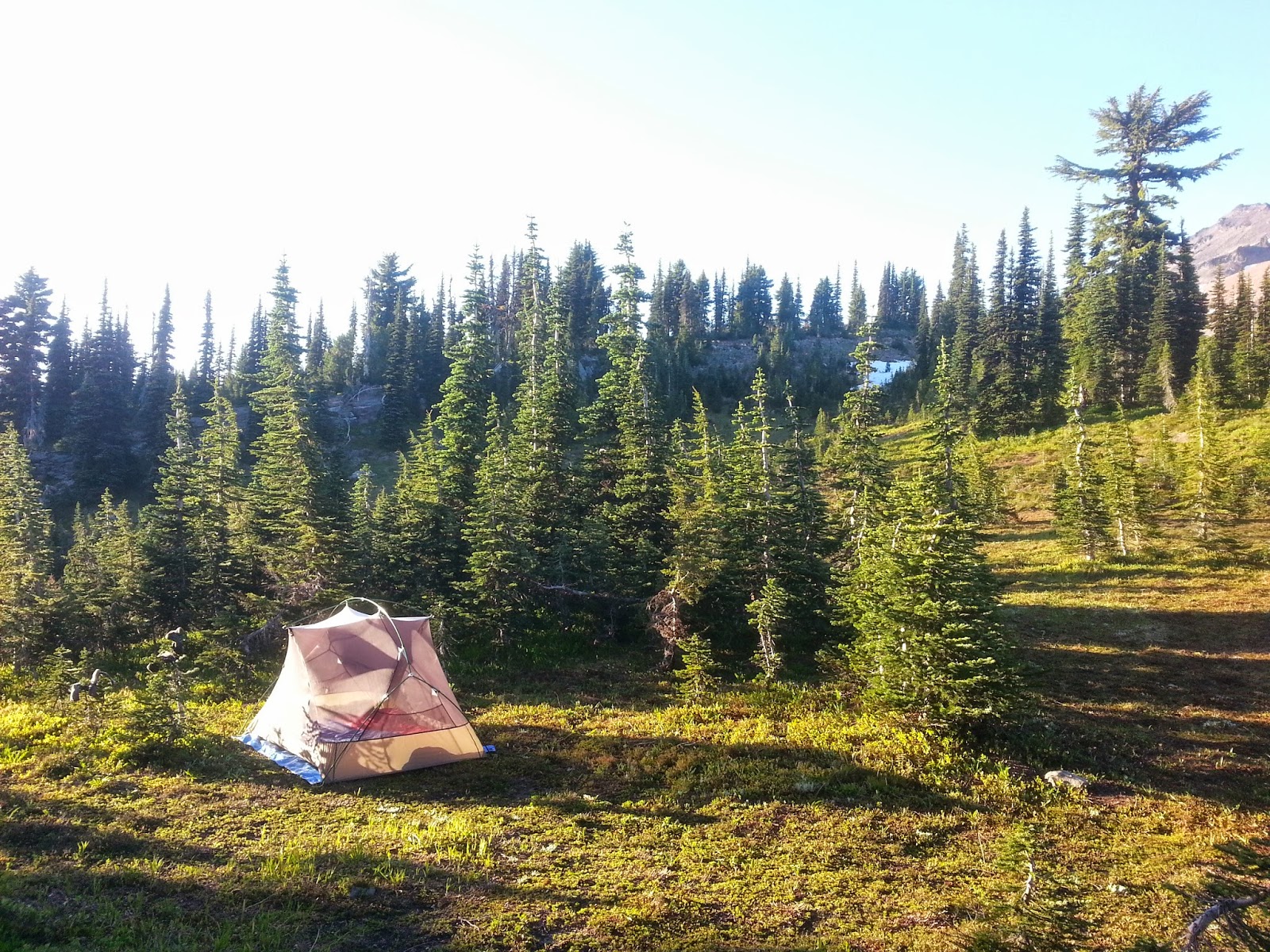 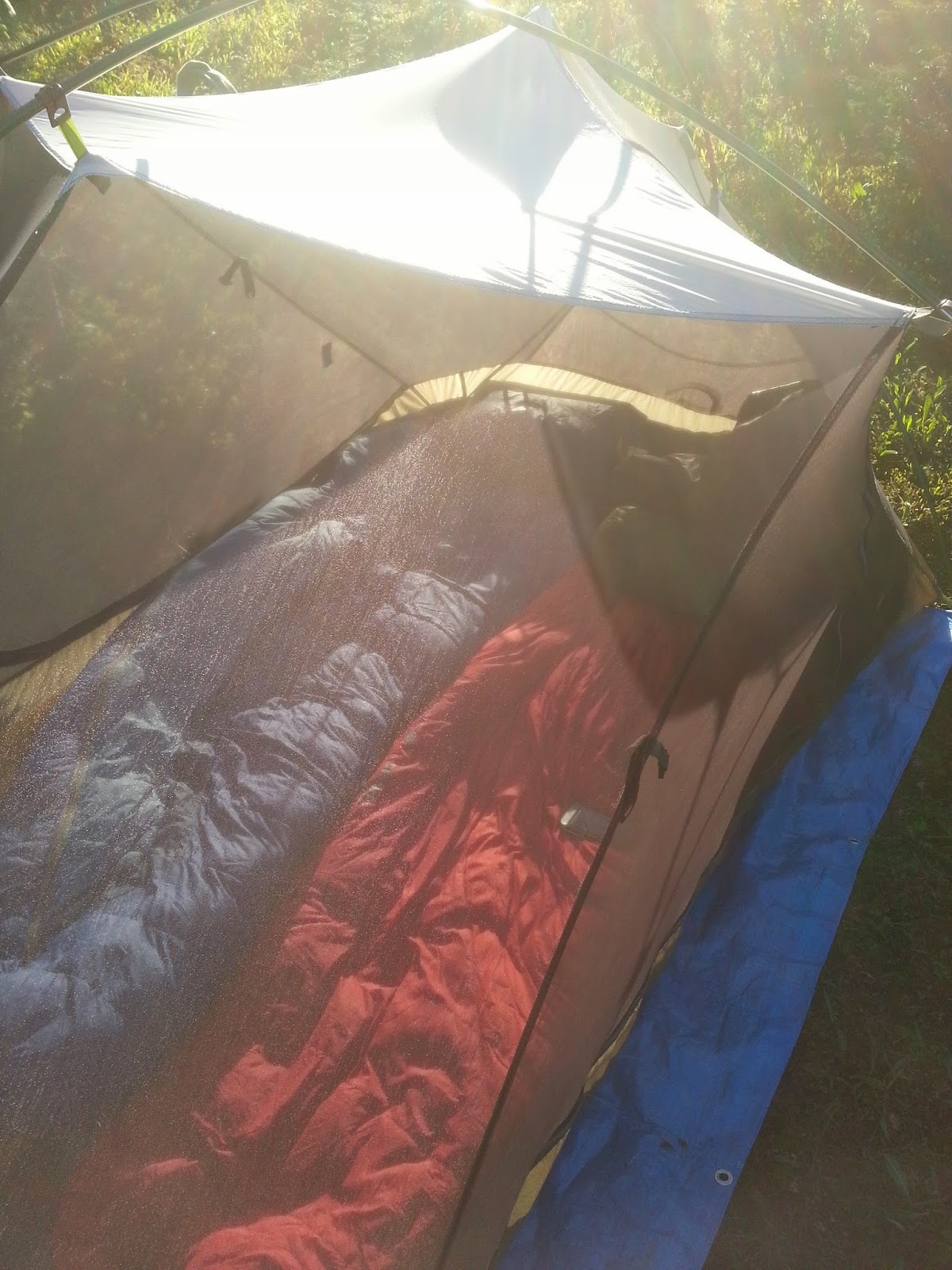 . We couldn't be more pleased. It's still a hundred twenty miles to Oregon, we may have challenges ahead. Today's been great though, the Goat Rocks are awesome. Its been an intense, emotional and eventually very successful week. 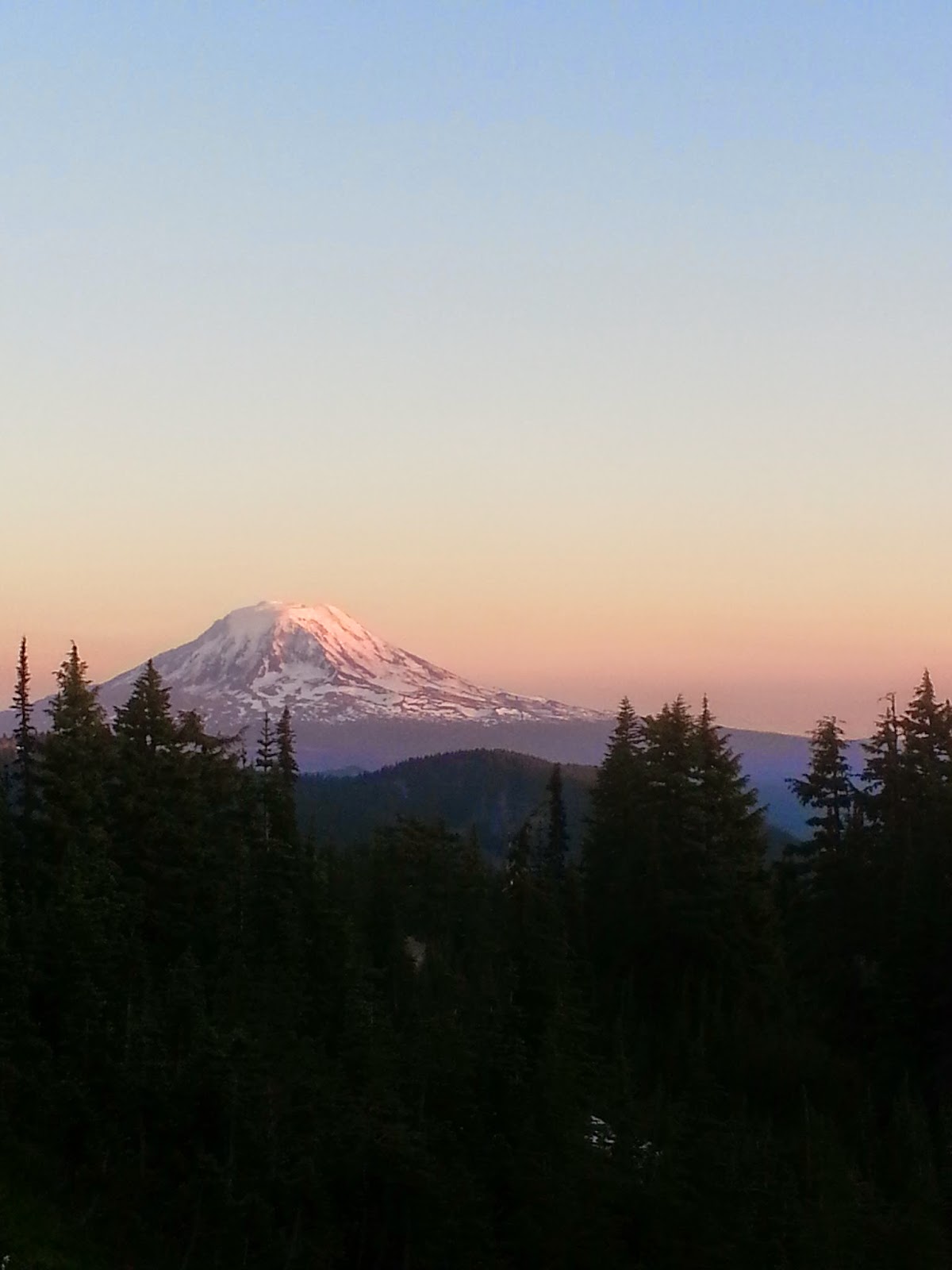 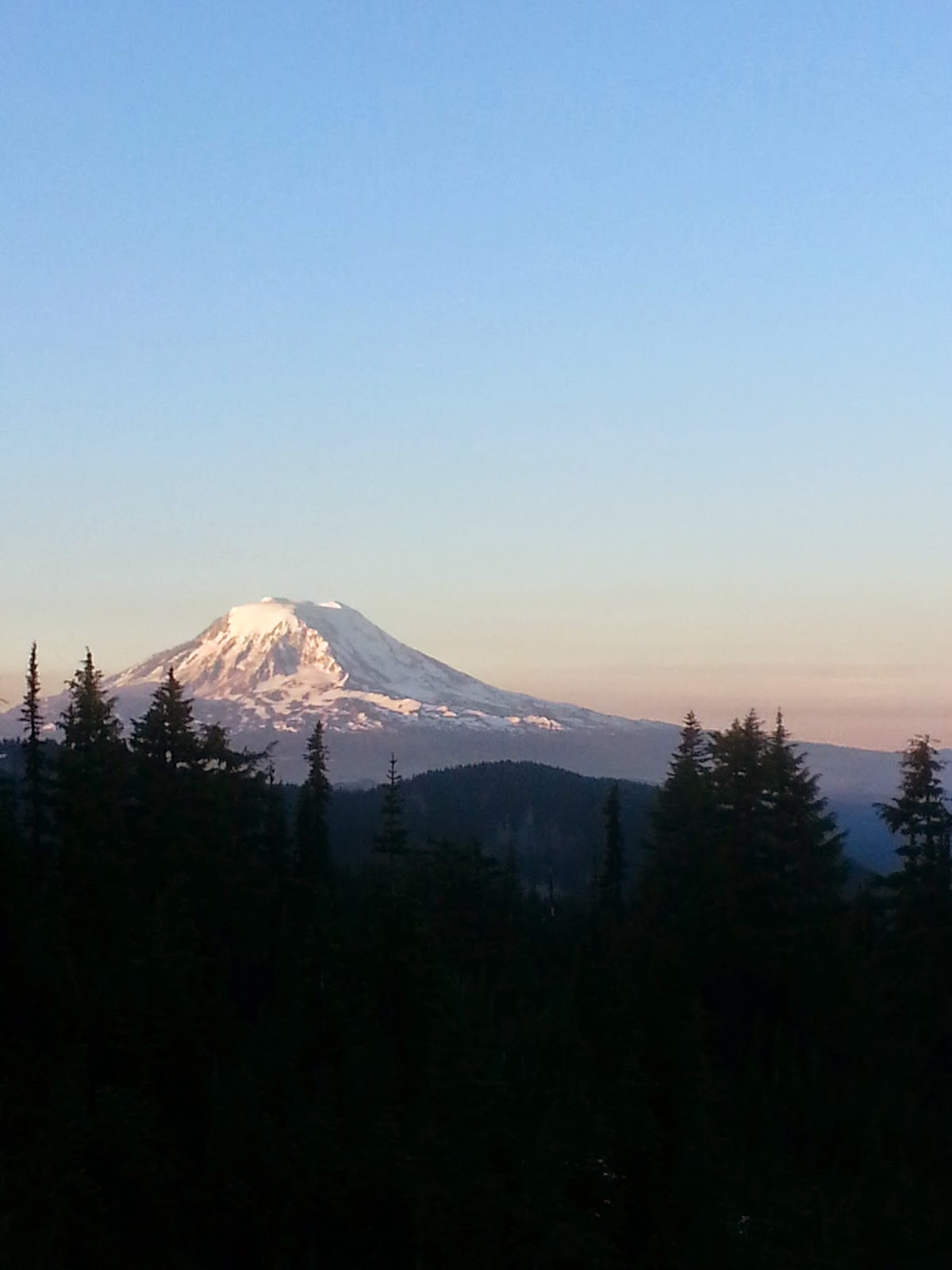