Just sitting in the grass. 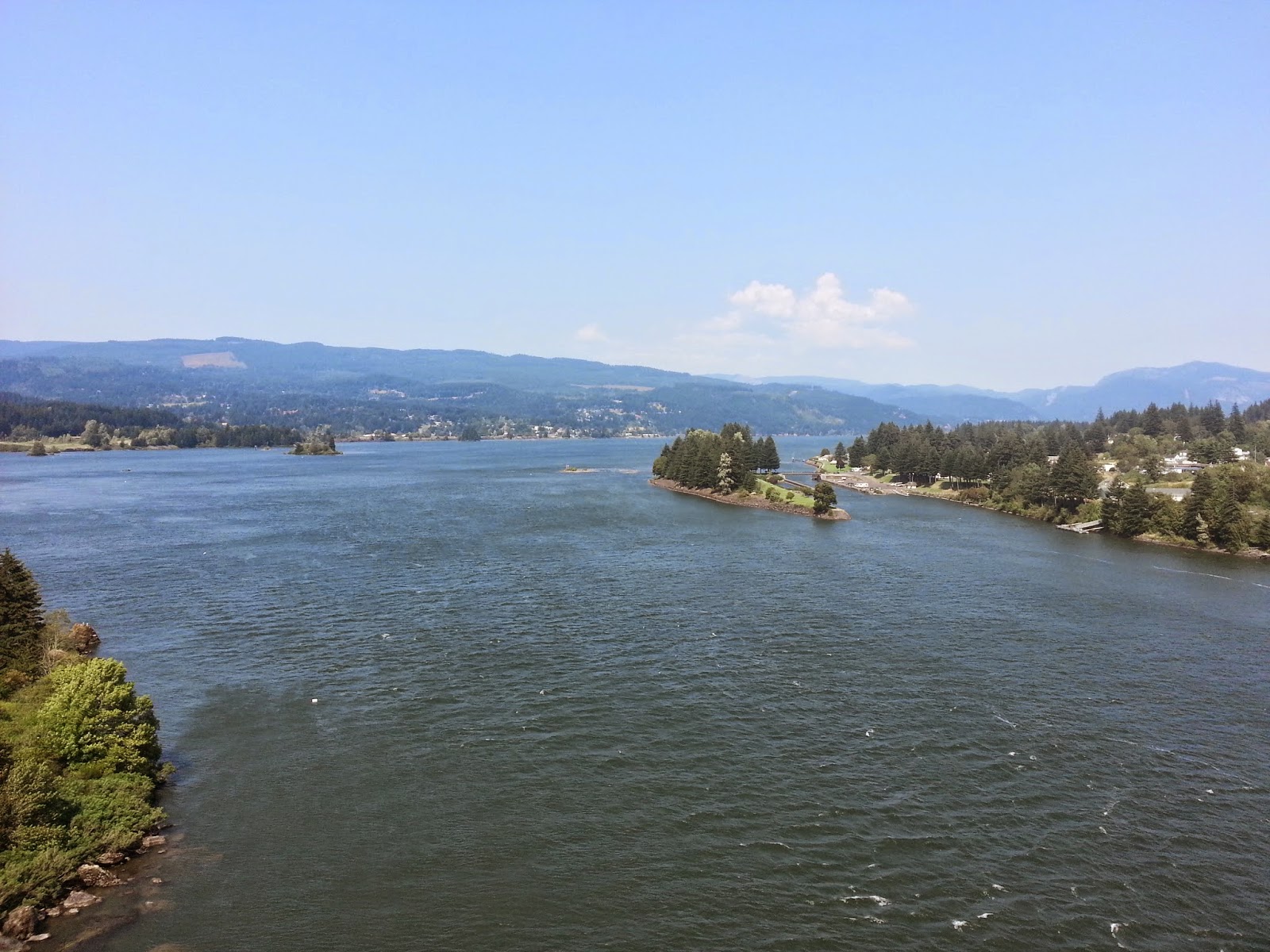 The wind is blowing, the weather is perfect. 75 and sunny. Clear with low humidity. We're in Oregon now and it's not such a bad place.

We woke up late in the Indian heaven wilderness, around 9. Maggie had a restless night of sleep, the bear came back repeatedly throughout the night as well as ghosts of bobcats and mice and such and they kept her awake. We only hiked 11 miles but it took us a long time. 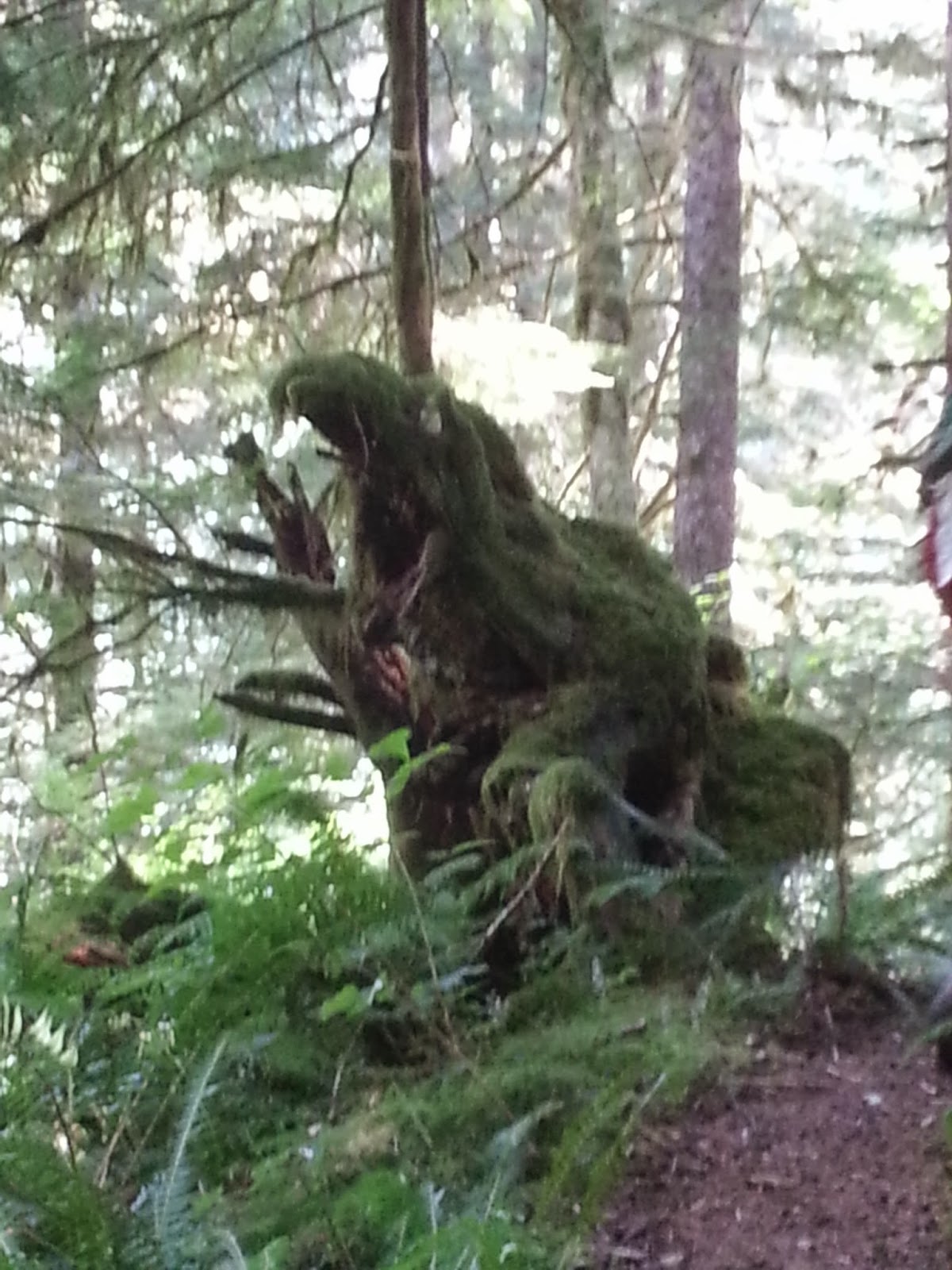 Halfway through Maggie's ankle started really hurting. Its her left ankle, not the one she broke last year. It was very upsetting to both of us. I don't like to see her in pain. She told me it felt broken and she was limping. We stopped and then suddenly Connor said goodbye to us. We hugged, it was a touching moment, and off he went on his own again. He made it into Portland and is spending a week there, we traveled with him for 8 days!

We settled down that night and talked about her pain. It was very sad, if something's really wrong she'll have to go home and Cascade Locks. She doesn't want to go home! We talked about our options. Maybe she could stay with Matthew Lee or Z in Portland for a few days resting and then somehow get to Eugene and stay with Amber for a few days and from there meet me at the town of Sisters. We tossed around some ideas and eventually she started to cry and I held her even cried a little too. I don't want her to leave either. Let's see how you feel tomorrow.

In the morning she felt good. We were happy to hike. We talked about her continuing on from Cascade Locks, the great buffet at Timberline Lodge she doesn't want to miss, and beautiful Tunnel Falls. As the day progressed her pain returned. "I don't want to be in pain" she said and I held her in the trail as she cried. There was a nice campsite but we were trying to go 17 miles that day and have only gone 15. Let's stop I said. It was only 2 in the afternoon because we had gotten started early. We bathed in the stream, it wasn't too cold, it was a beautiful place, although we were still feeling down. I slowly rubbed her foot and then took a red huckleberry and massaged it into her hurting shin. The berry ceremony. Now she must be cured. 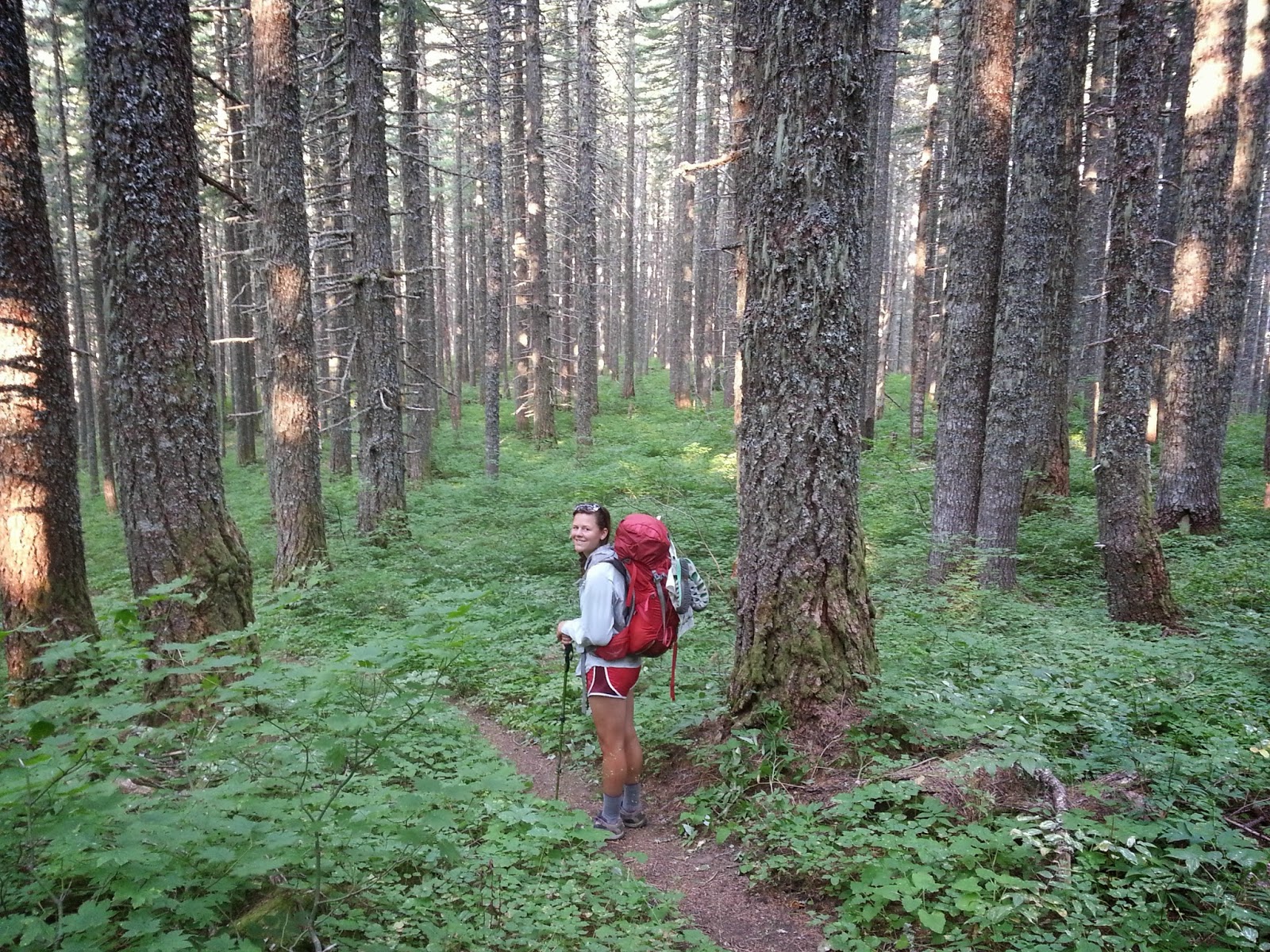 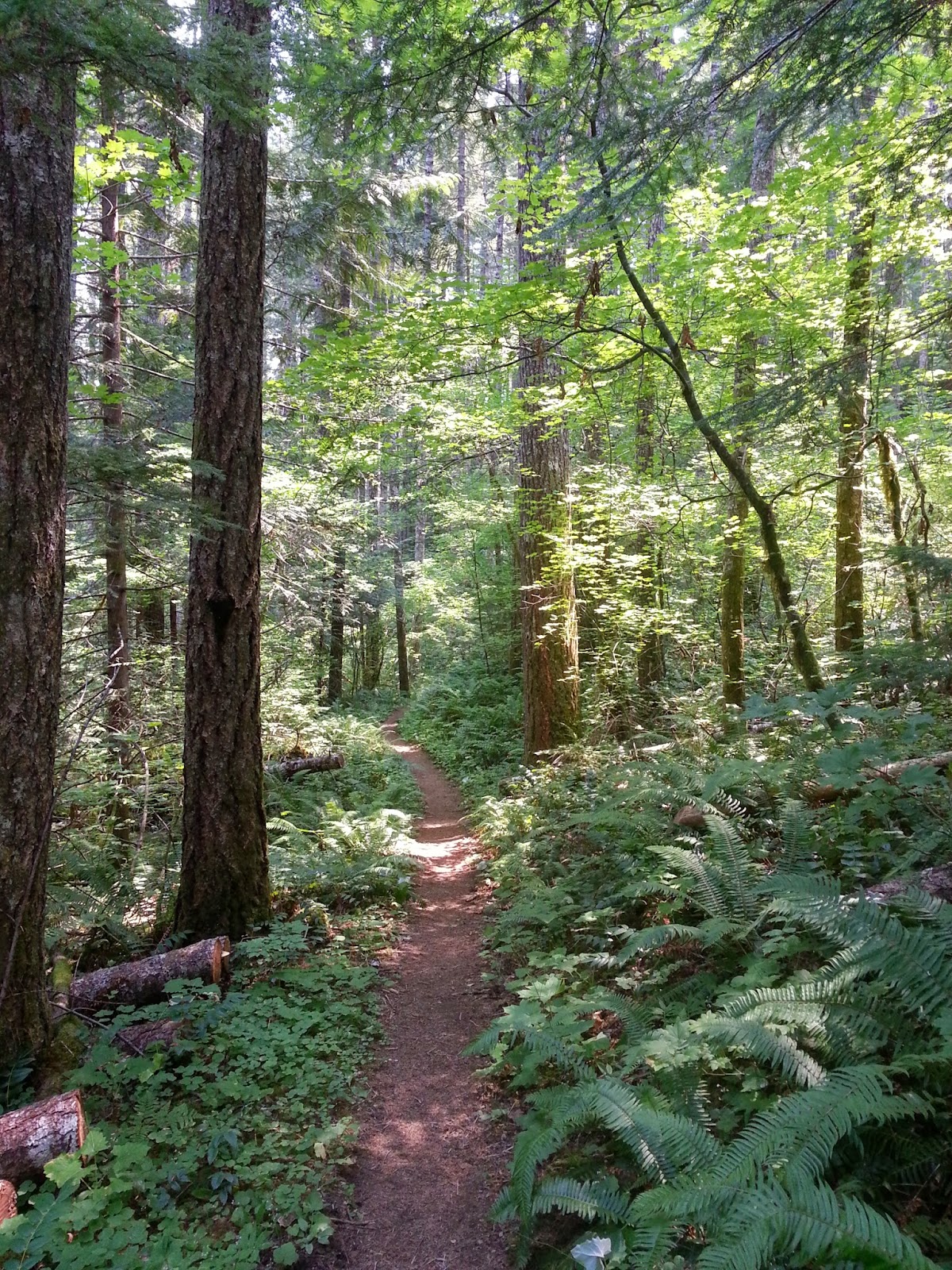 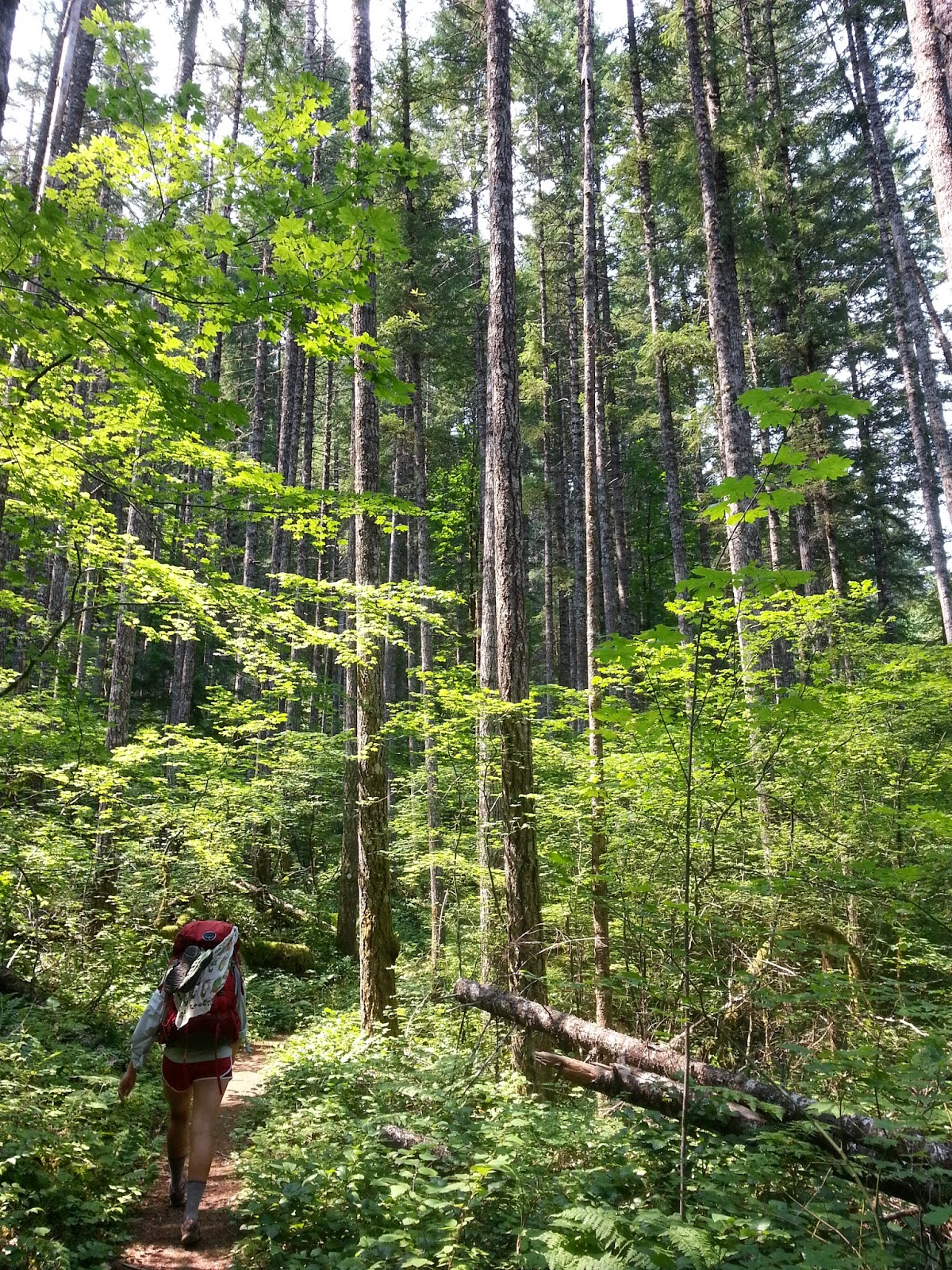 Then we met Julian. He told us we actually had gone 17 miles today and we were in fact at Trout Creek. A nice surprise, only 30 miles to Cascade Locks. Julian's a younger guy from France heading southbound on the PCT. It's great to hang out with another south-bounder, they are always cooler. 1300 people started in campo, Southern California this year headed north and I believe we are of only 30 who started in Washington heading south. The South-bounders are always the non conformist, they beat to the beat of a different drummer. We always prefer to hang out with another so-bo.

They also seem to all have gotten a similar injury to Maggies. We found out Connor developed the same problem by the time he got to Portland. It's because Washington is a really tough place to start this hike. "Washington hardcore." Julian kept saying with his slight French accent. He showed us his injured leg, the same spot as Maggie and he had some athletic tape on it. He's been in pain and hiking through it, still going 25 to 30 miles a day. He gave us some tape and we taped her up. Talking to him really helped boost her confidence. "I hope it gets better" she said. "It will get better." He said.

We decided to wake up the next day before dawn and start going, it was only 30 miles to Cascade Locks, Oregon, and then we've completed our time in Washington. We were going to hike with Julian and maybe do the whole thing in one day. We woke up at 5:30 and got to hiking but Julian had had a bad night. He suddenly became sick and was puking all night and was still sick in the morning. We wished him luck and left him there. He didn't hike at all that day, just sat by Trout Creek feeling too weak to move. Who knows what was wrong with him but he felt completely better the next day.

We hiked up a big hill and down the other side into a lush rainforest. We felt good. We took a lot of pictures of the forest, it was very peaceful and we had the trail to ourselves all day. 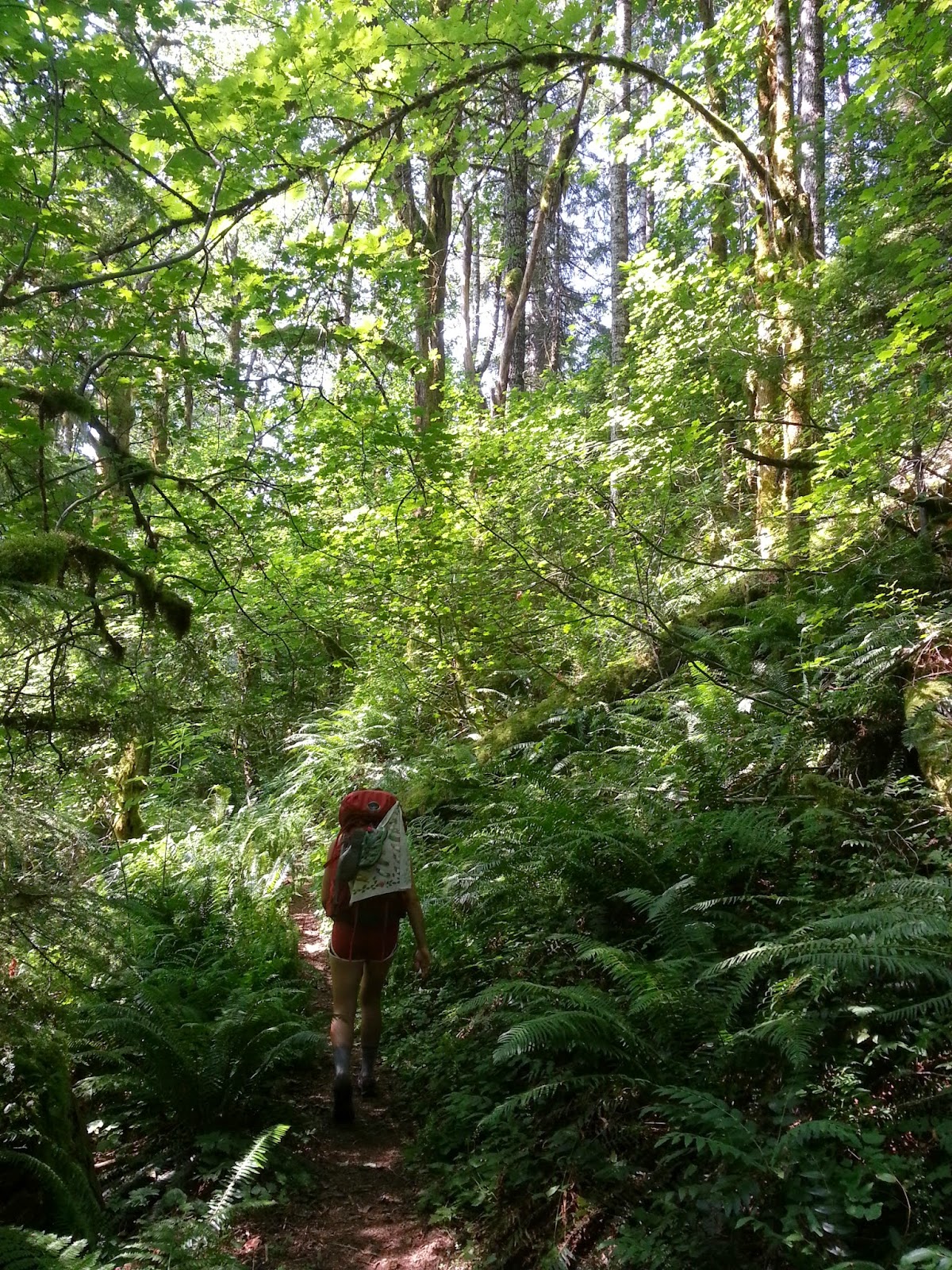 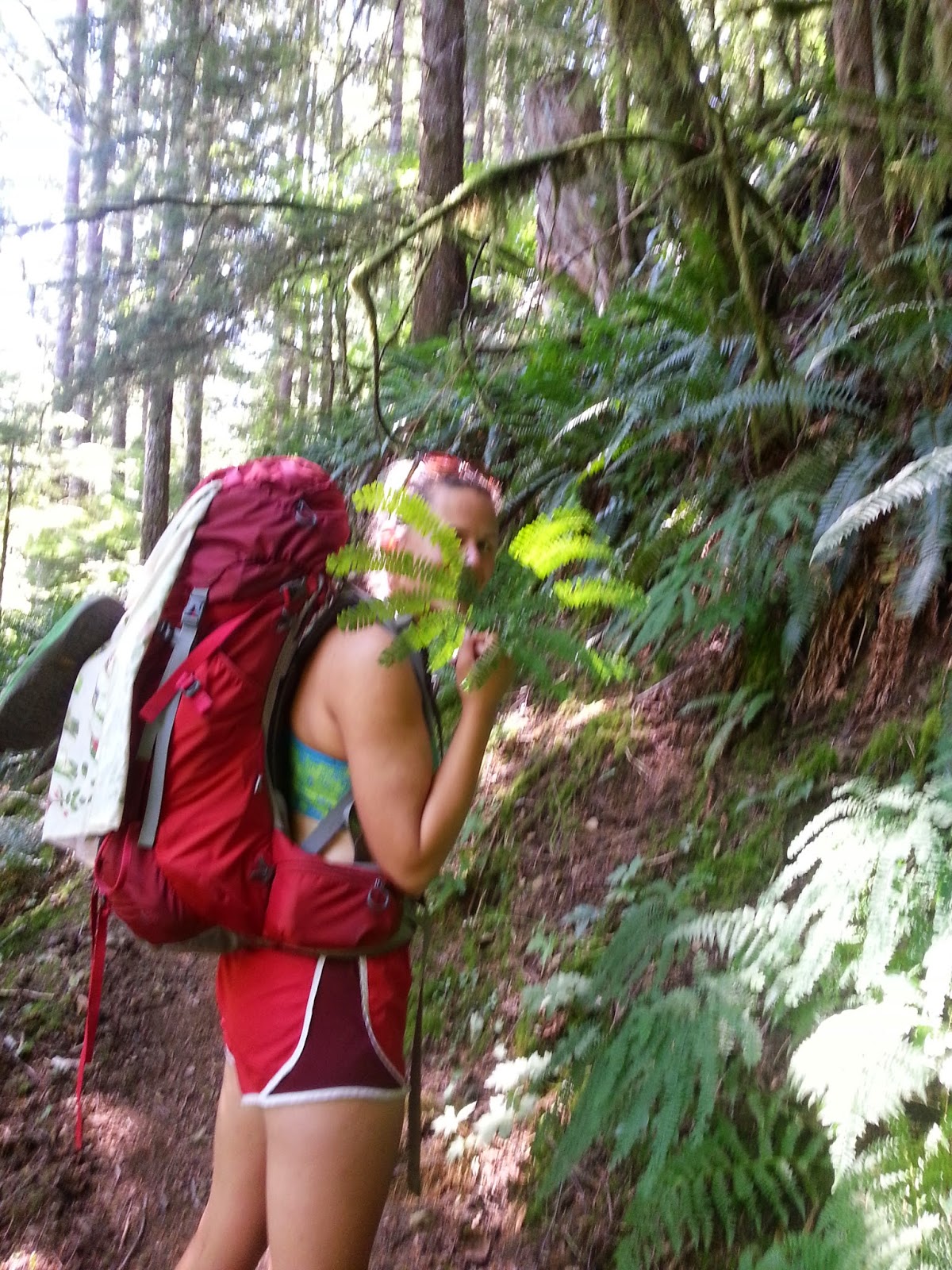 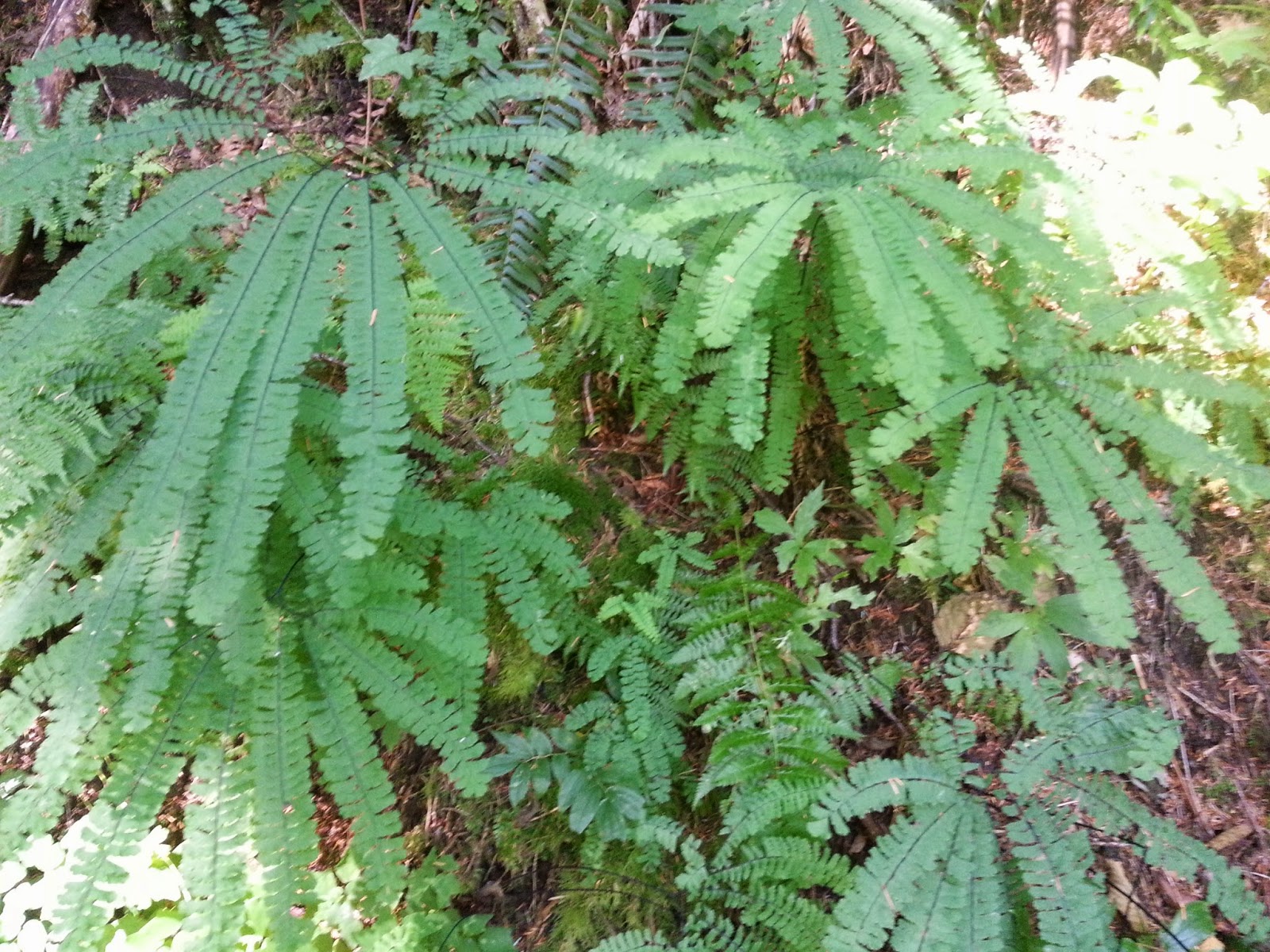 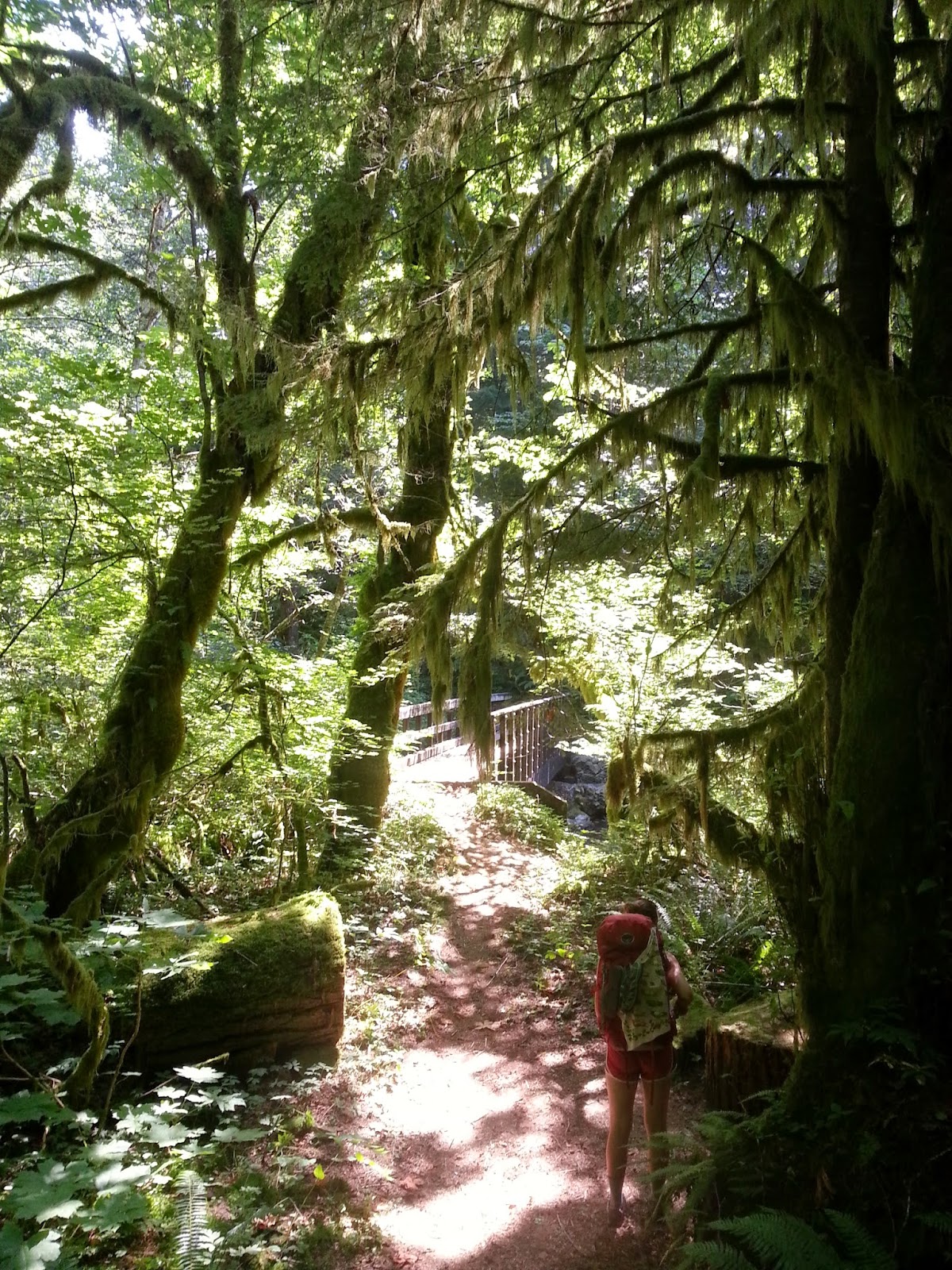 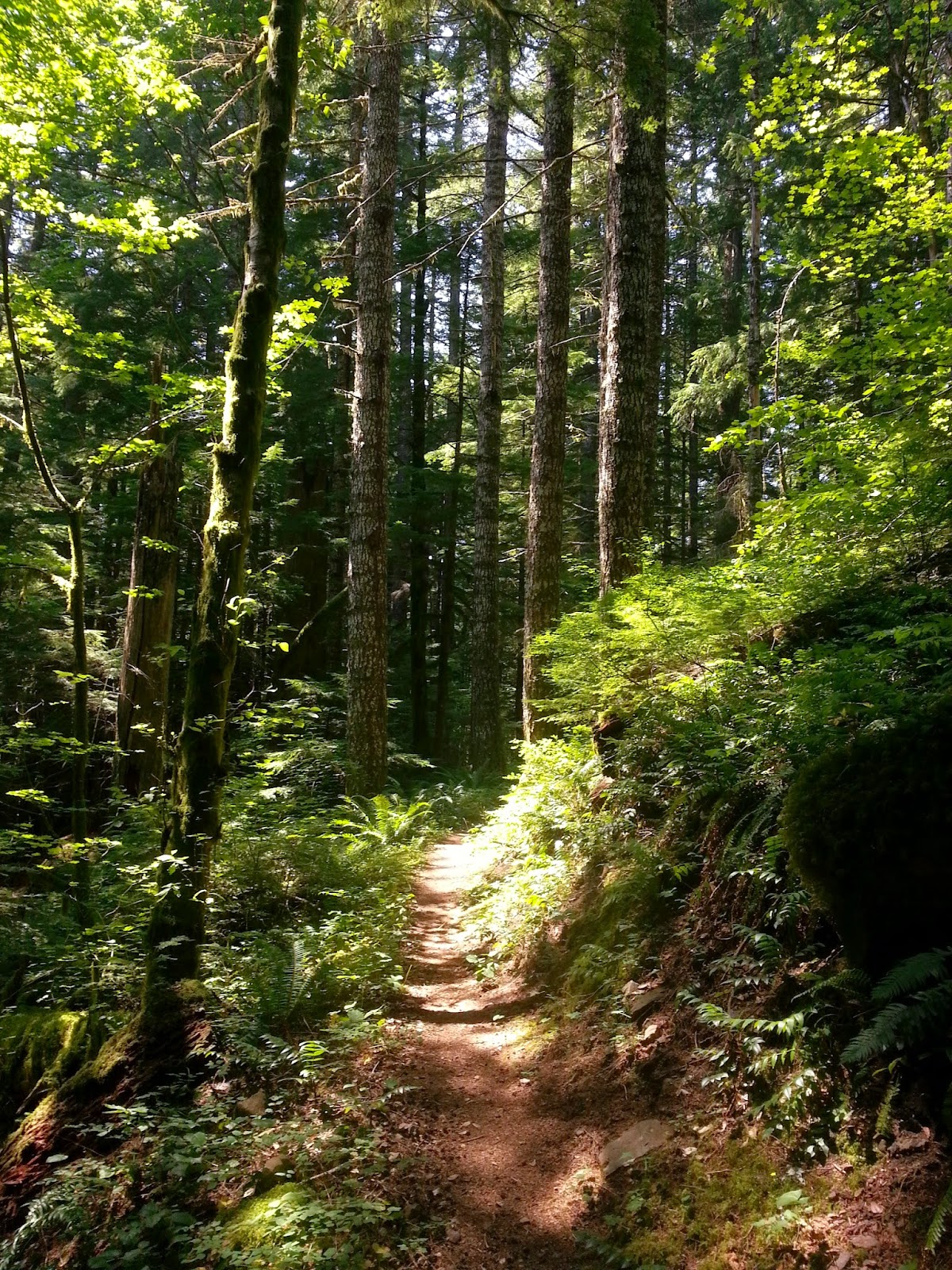 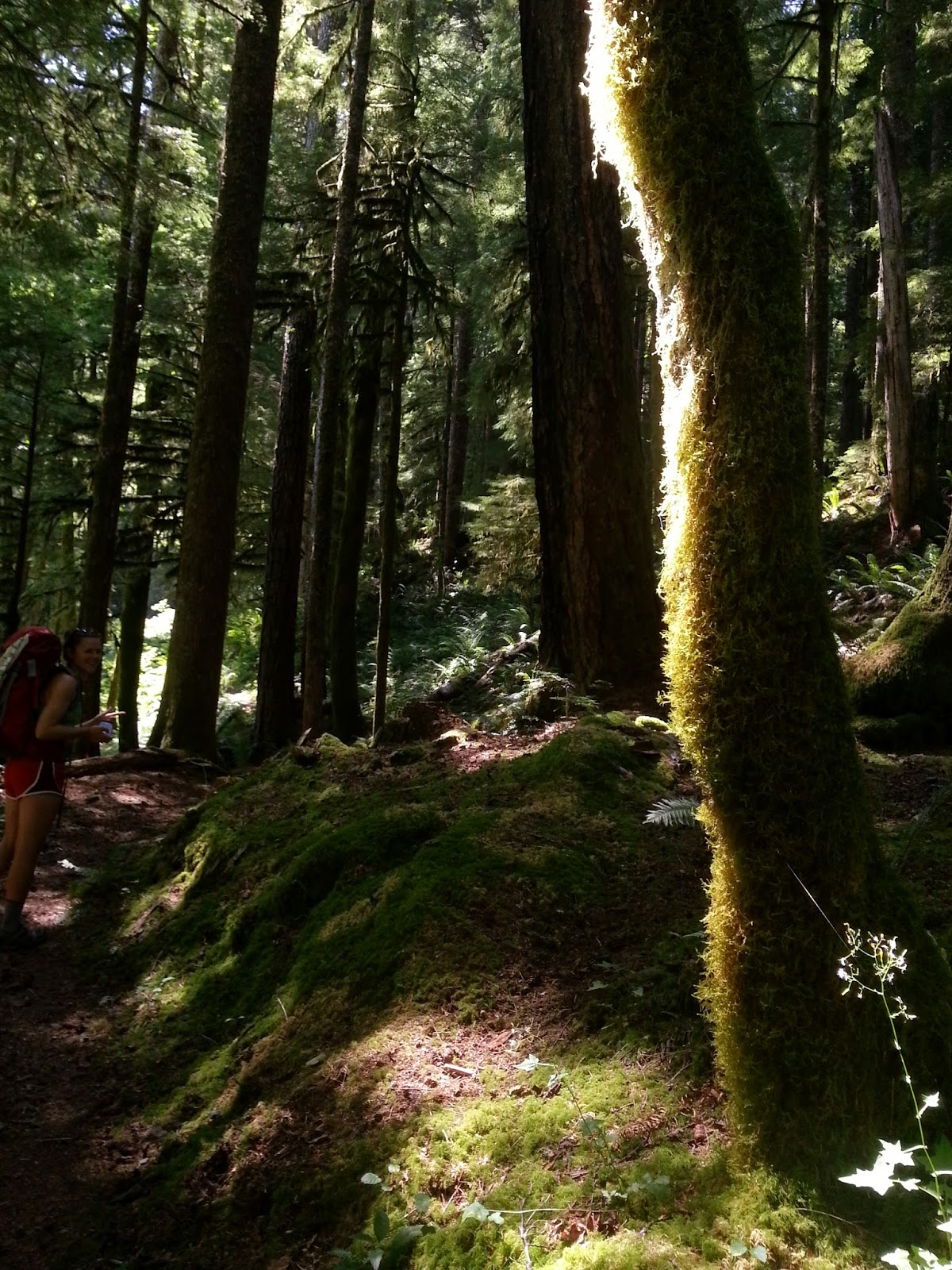 Then we hiked very steeply up another hill and I don't know if it was the tape or the berry ceremony but Maggie ankle didn't hurt her at all. She was fine all day and it was wonderful. We were having fun. At the top of the second hill was a side trail to Three Corners Rock. We took it and it was a good view. 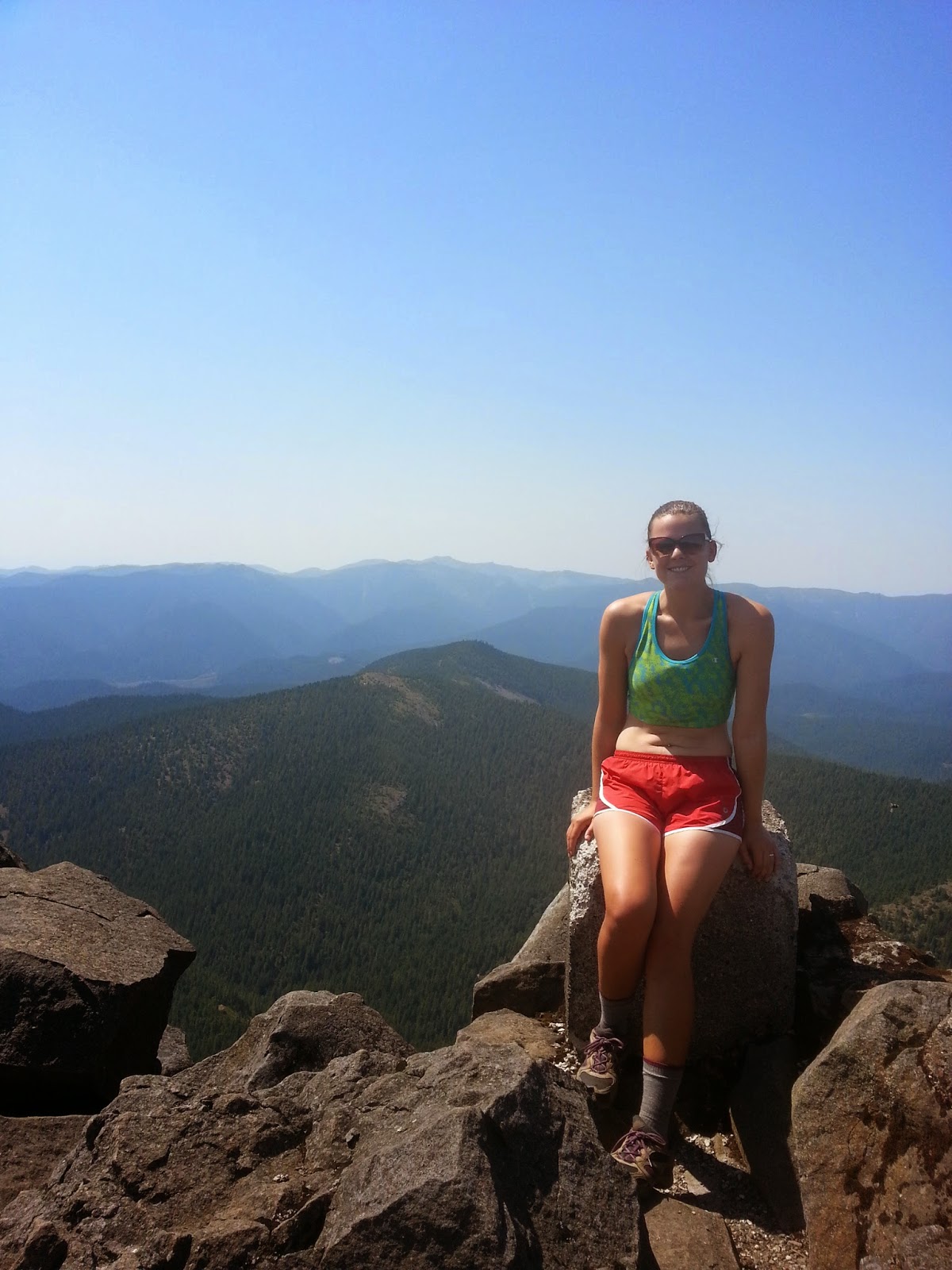 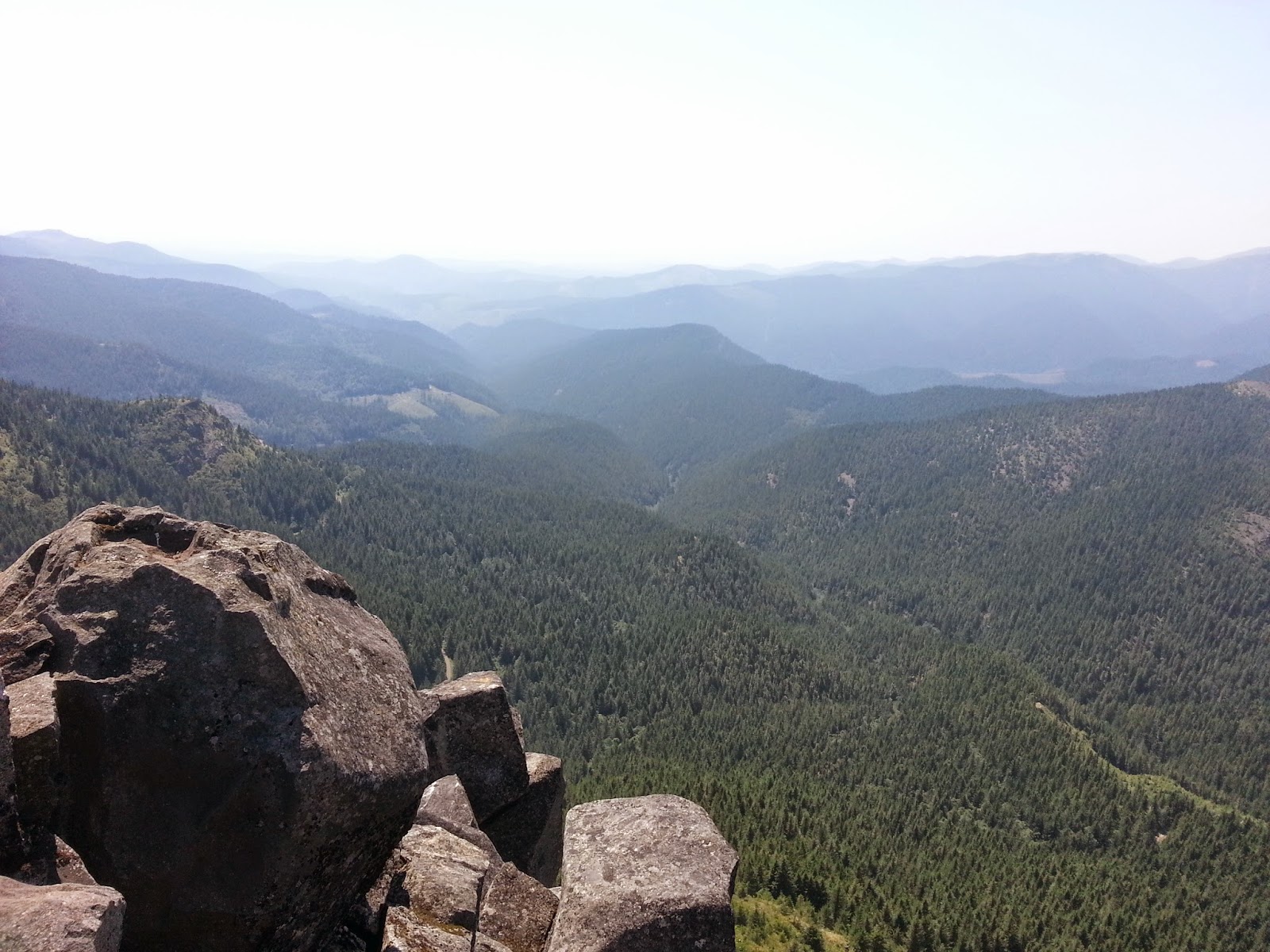 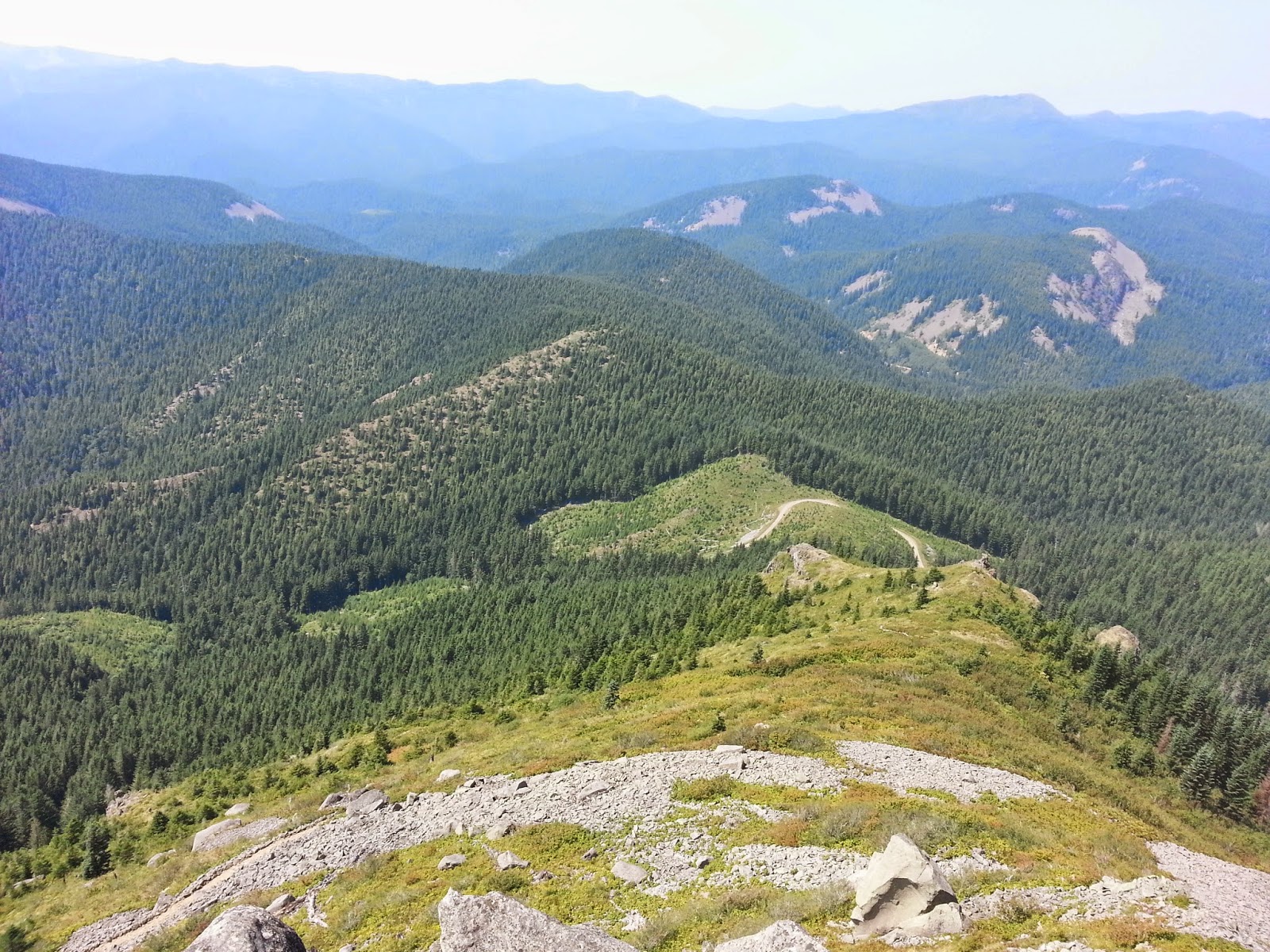 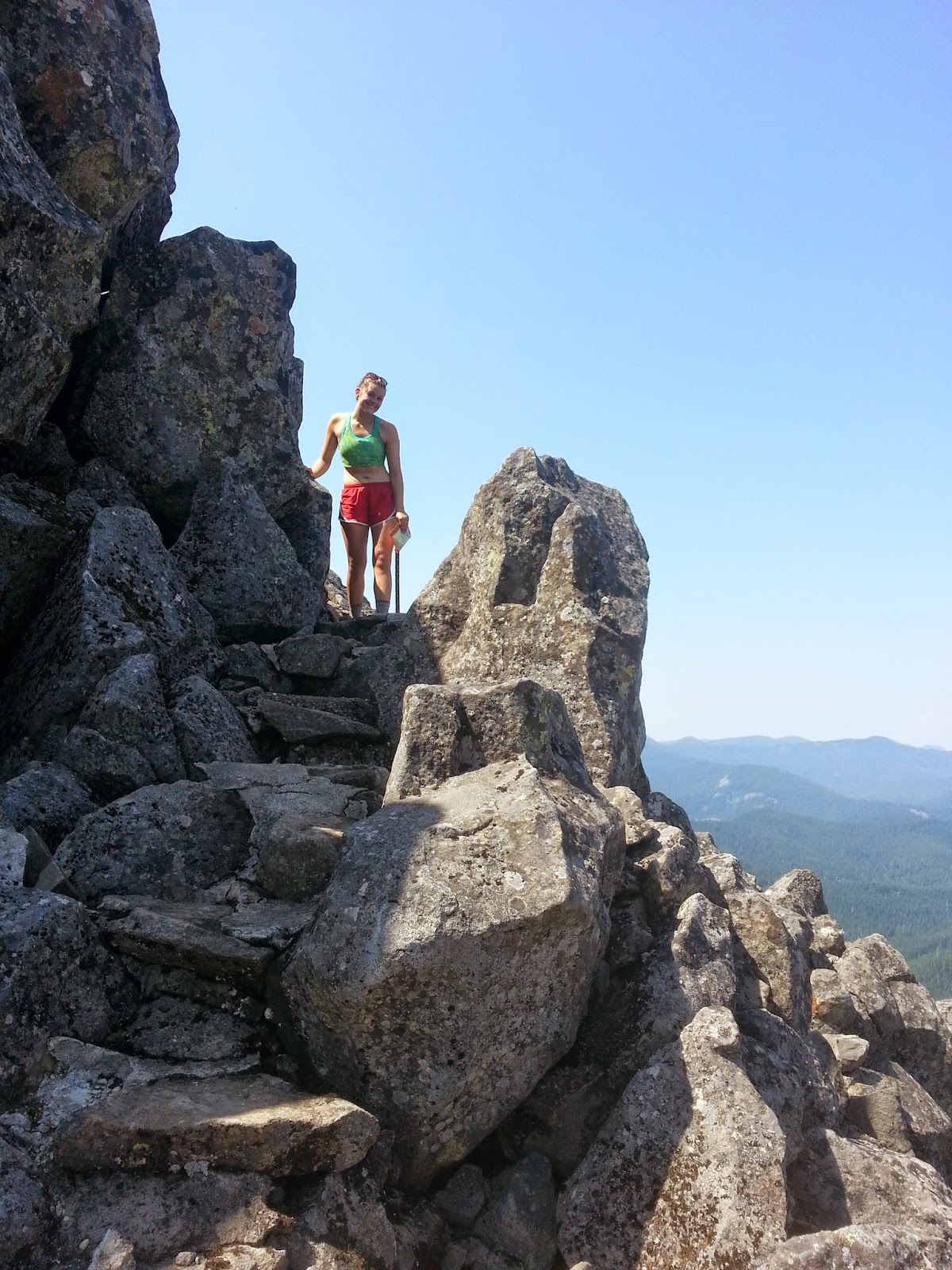 The berries were so plentiful today, as they have been since Trout Lake. It's great I eat hundreds and hundreds a day. Constant berry intake, I'm good now at picking and hiking. My poop is blue with seeds in it like a bears! 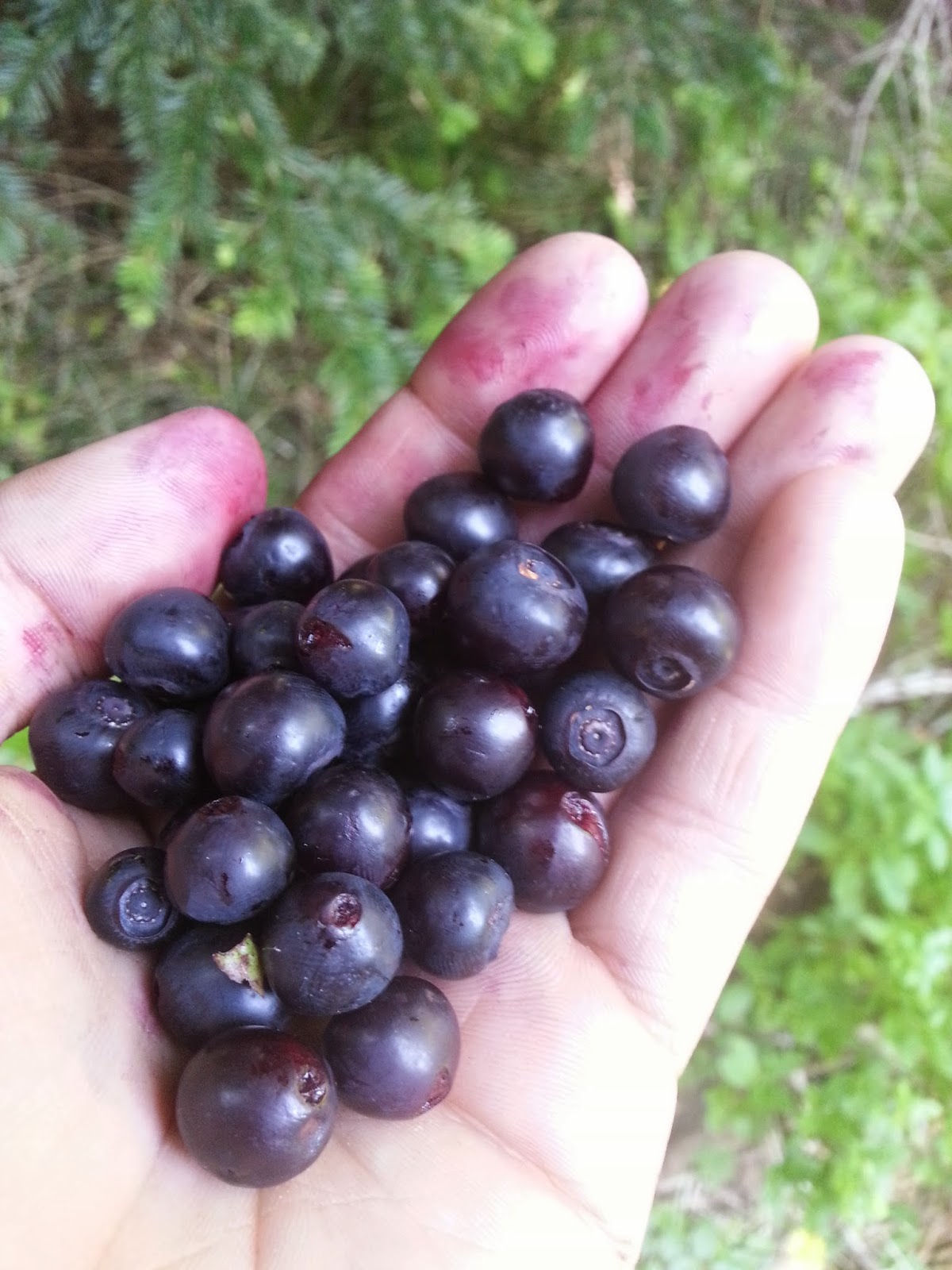 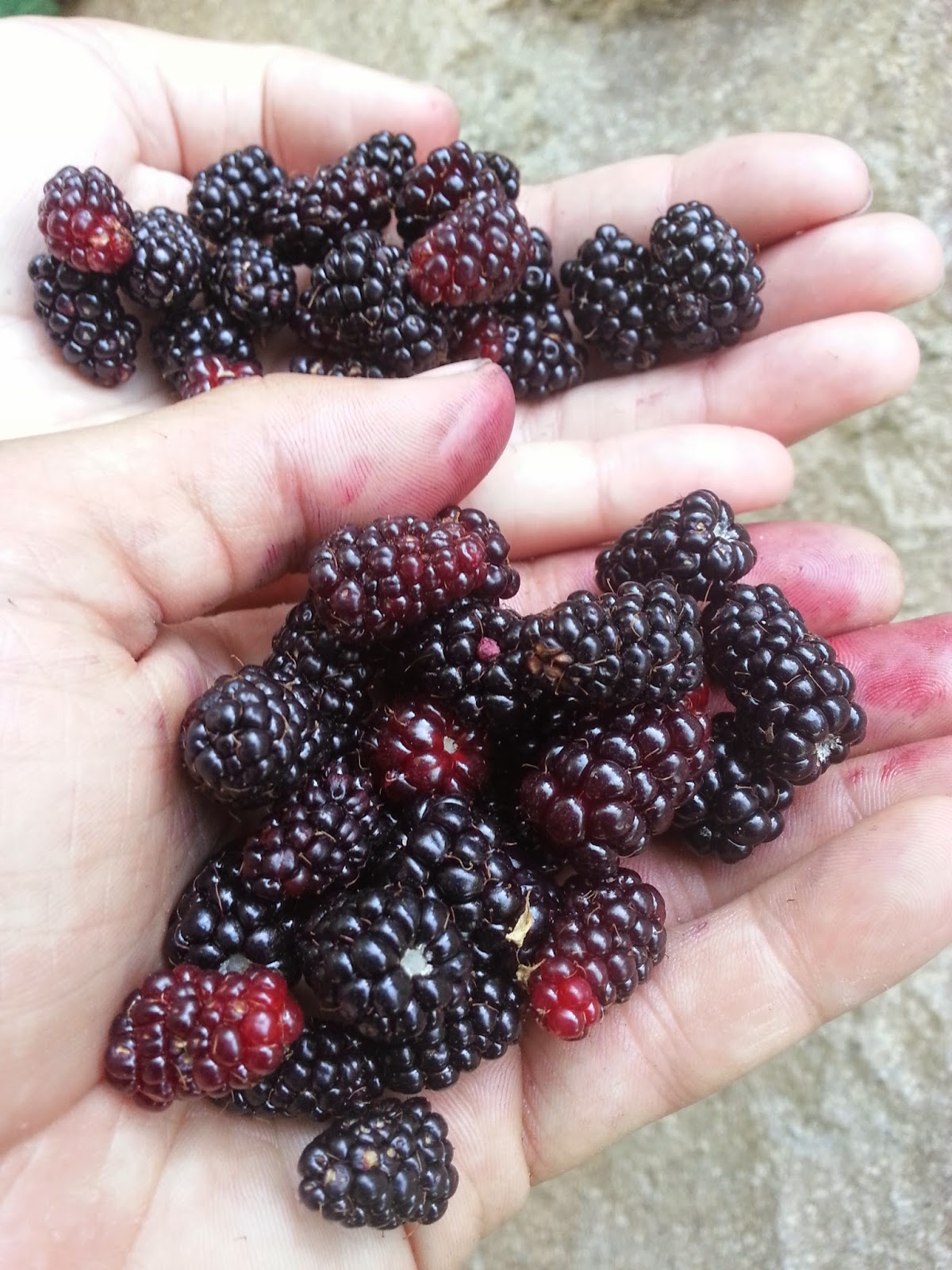 So we made it 23 and a half miles of grueling up and down terrain with absolutely no problems. It was a miracle! We could have kept going to but nah, we were tired. That night we drank very pure delicious spring water and burned our maps. We ate the last of our food, but I still had extra food. We were only 8 miles away now, woohoo! Our packs were extremely light. When we left White Pass I had over 10 days of food and now its gone! Amazing.

The hike the next day we had slept badly and were a little agitated before we turned off to a road at an unsigned trail junction and headed about a mile of steep downhill in the wrong way. We stopped and chilled out. We had no snacks or lunch left. We started climbing back up the hill and a girl coming up told us we need to go back down to get to the PCT. She passed ahead of us and we stood there. She gave me specific instructions and I didn't believe her. What to do. We were using Maggie's GPS app and studying the one piece of map I didn't burn. We continued up the hill and soon found the trail. Whew, I was right this time! Maggie ankle didn't hurt her today either, its healed.

We were hungry and unable to make very good time to Cascade Locks but then we got there finally! We crossed the Bridge of the Gods over the grand Columbia River, the Oregon Washington border. It was an epic moment. 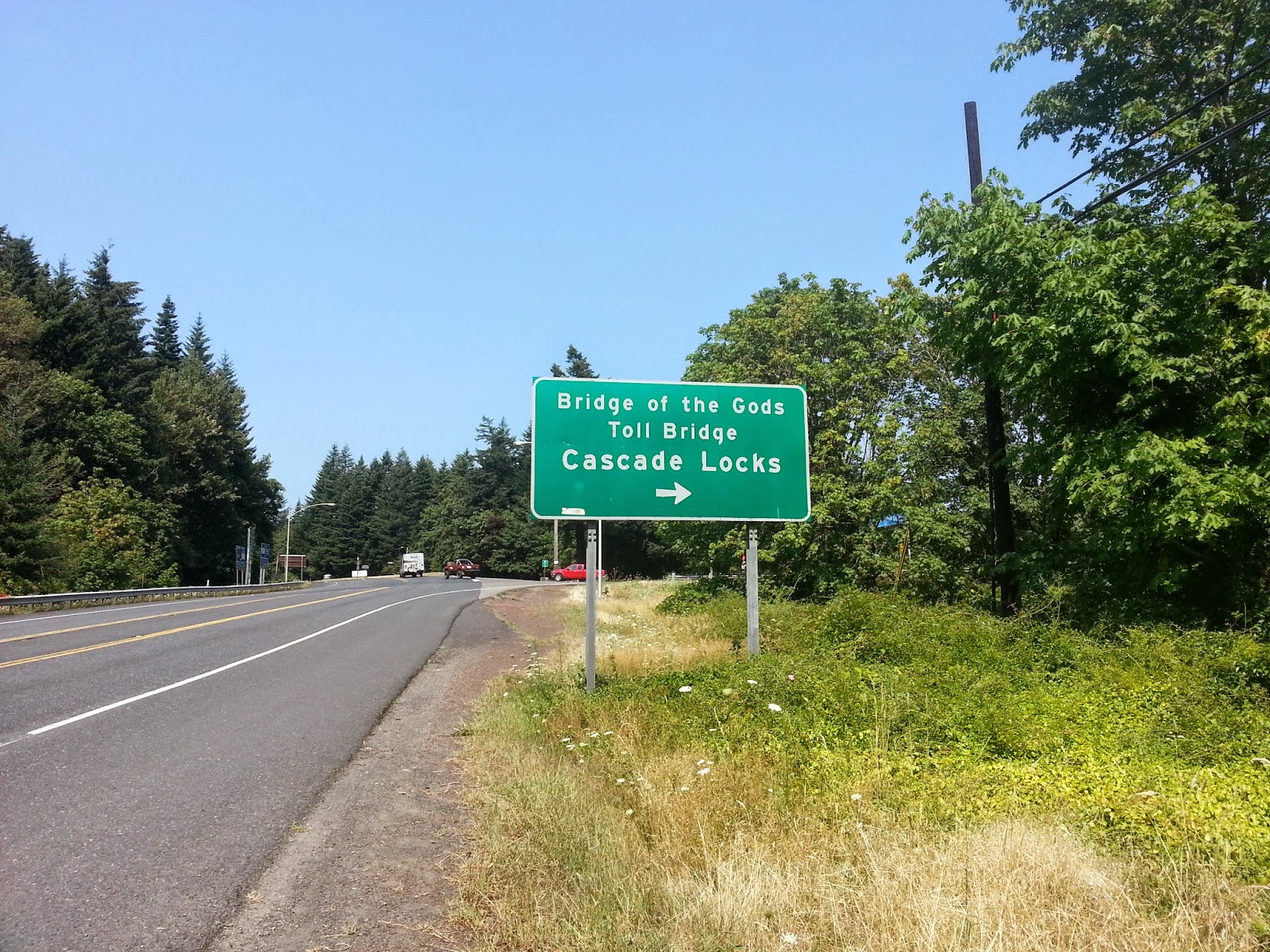 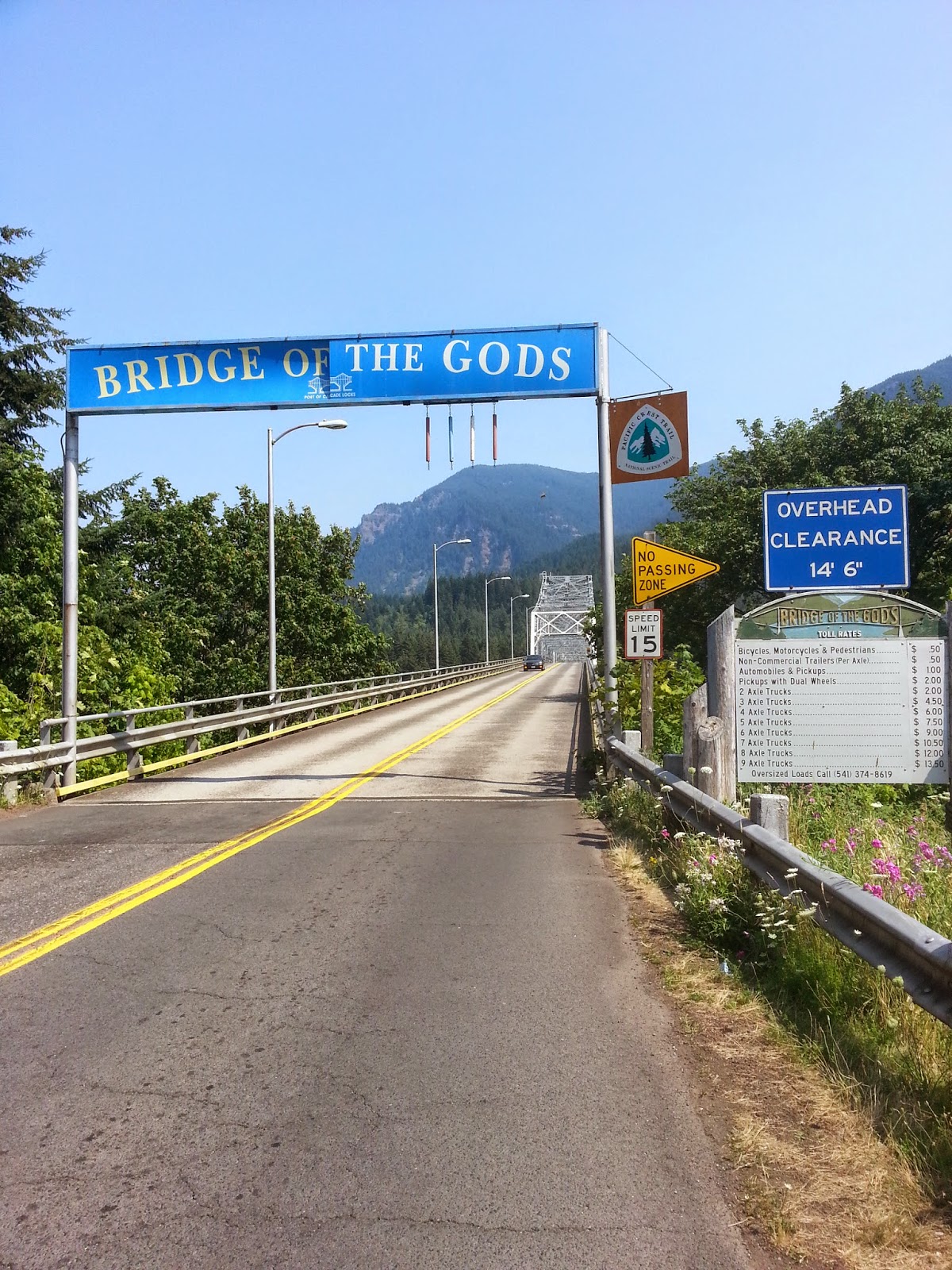 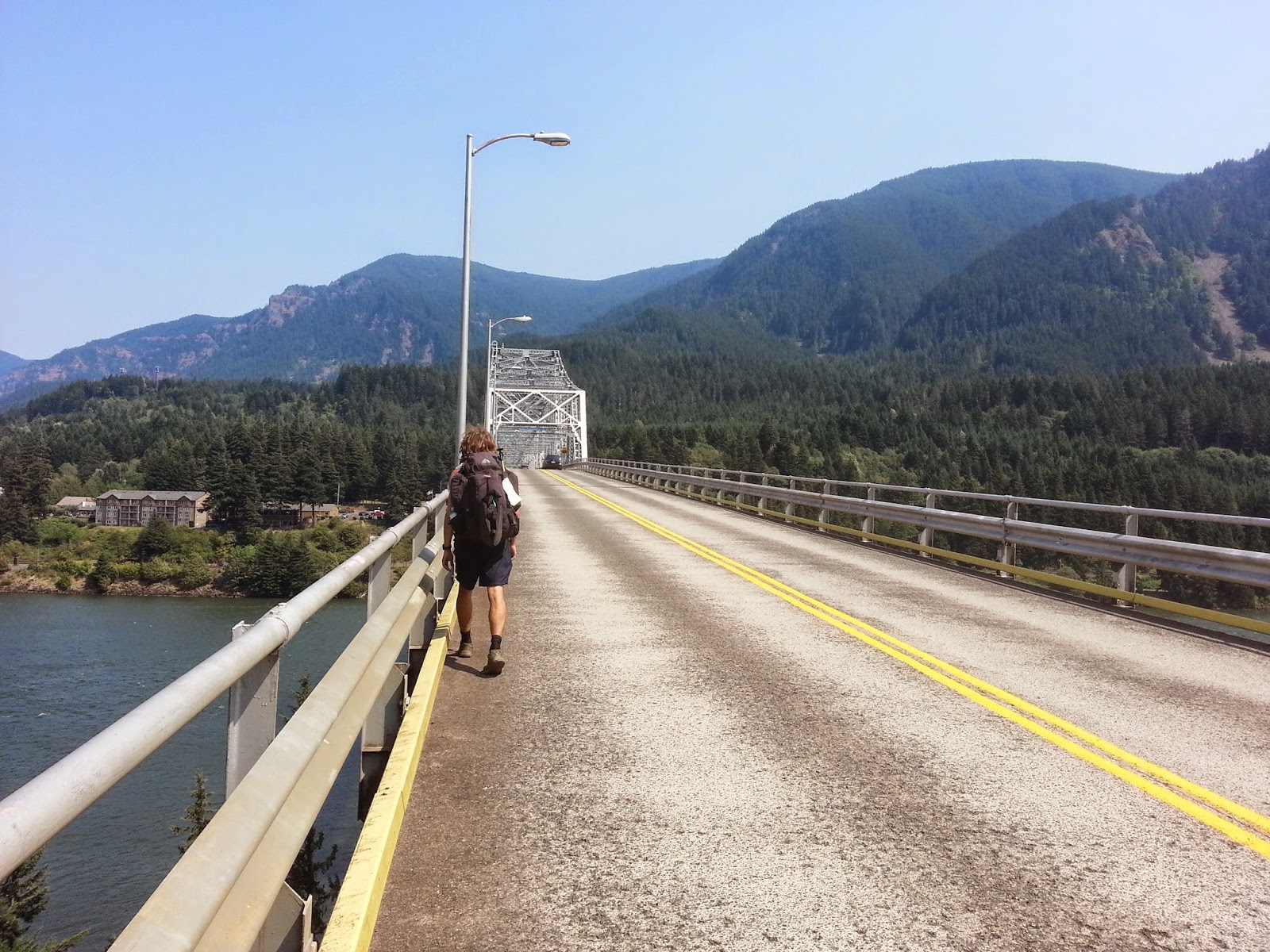 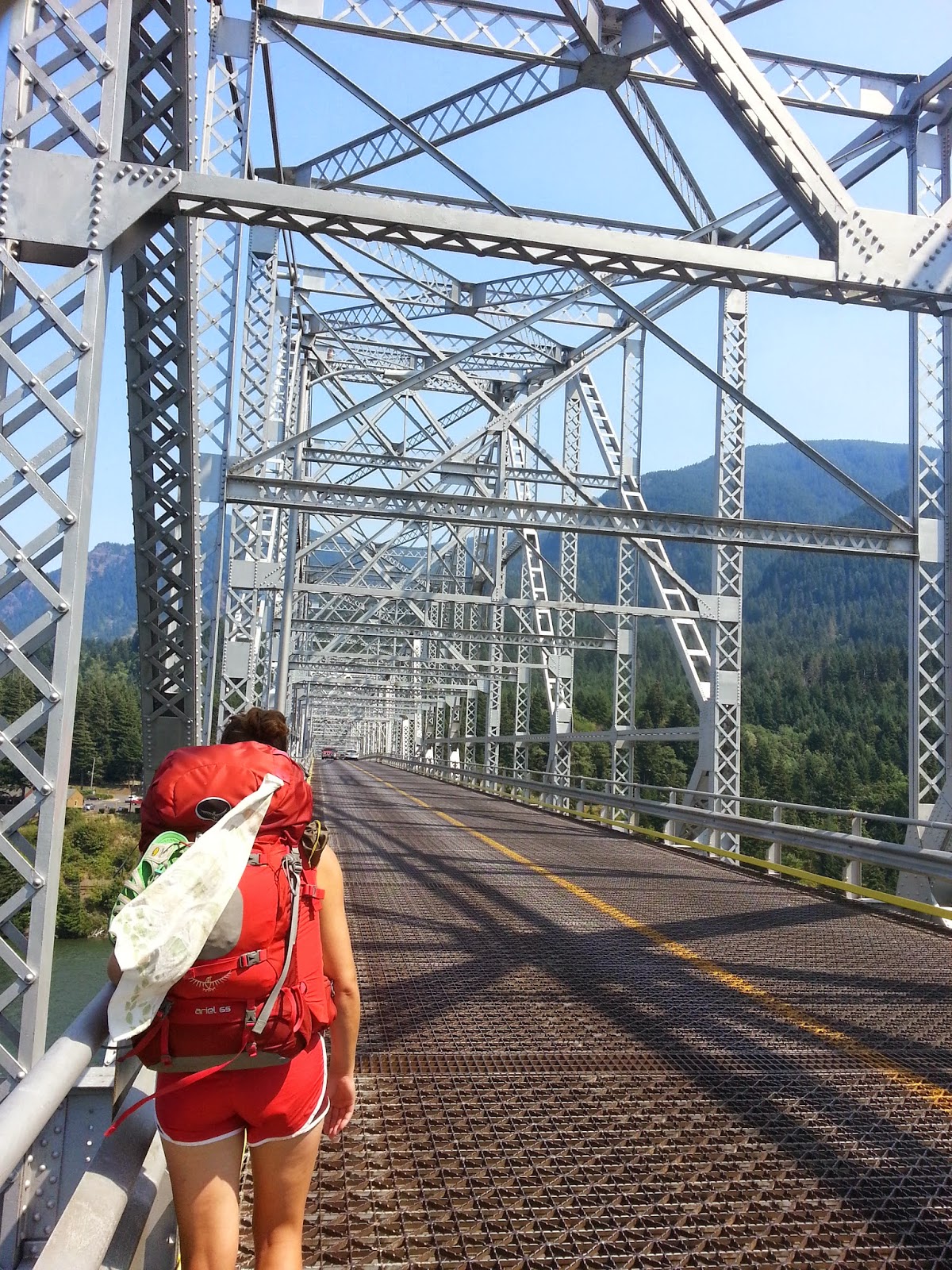 We were very happy to make it here, back to this town we had visited on June 22nd on our road trip with my dad. The first town we had been in since the city of Chelan in early July that had more than just a gas station to buy food! We were starving and went straight to the ice cream place but then we had to wait in line for 45 terrible minutes! Finally we had our ice cream and were then talked to by a bunch of people there who wanted to know our whole story and we got a big long lecture about how we needed to buy a gun and the ice cream melted. ....We were so mad! Leave us alone everyone were freaking hungry!

So we went to a restaurant and got an amazing pizza. It was huge and nachos and salad and then we saw Julian walking by outside and we invited him in for some pizza. Some people were talking to us and then gave us a gallon of homemade beer in a mayonnaise tub! Whoa, it was a lot of beer. So we drank it and all hung out on the lawn of the free campground. Took showers and camped with Julian and some North bounders. Then today we just chilled. Did laundry and took a nap in the grass, eating blackberries outside the laundromat. I got to ice cream. We are so happy here and have made a bunch of friends. We are camping with the same group tonight. It's been a perfect zero day, one to remember, extremely relaxing, and soon we'll be ready to start our next adventure. 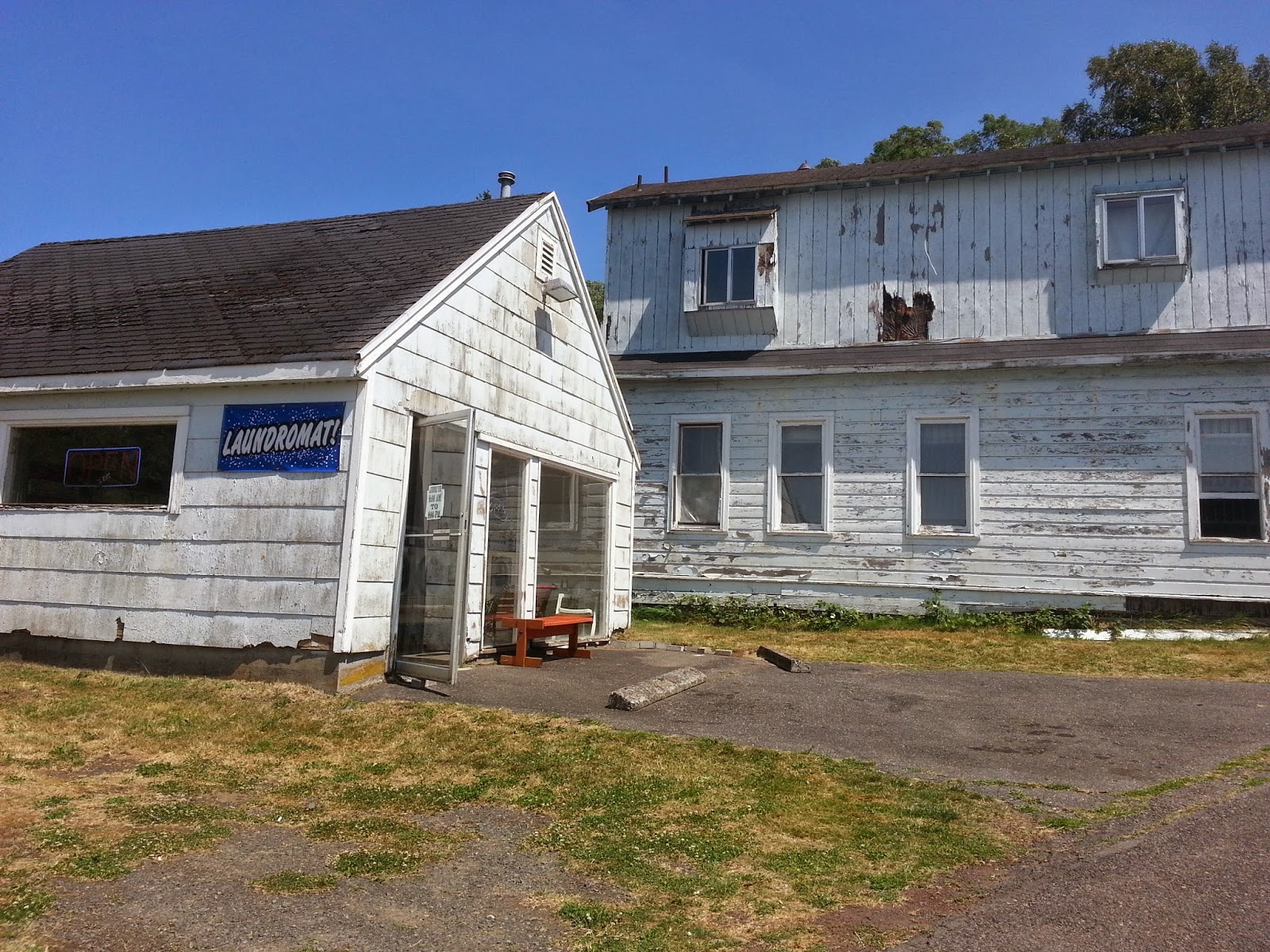