We awoke to another perfect day, the sun glistening off the Yampa River. 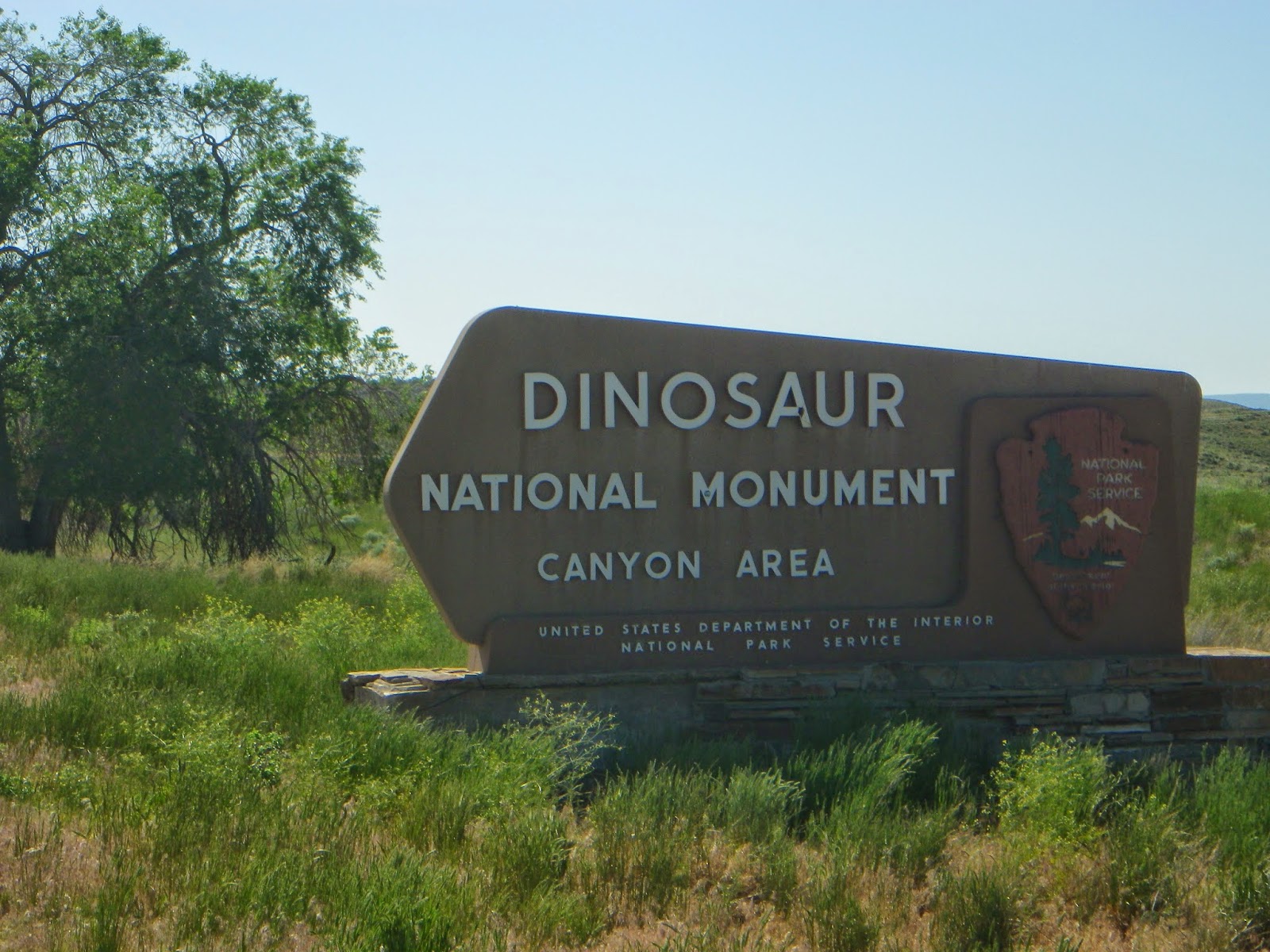 I was right in the middle of a morning poop when Maggie said, look Mike, bunnies. The poop was interrupted and I went into hunting mode. We could have used a little extra food. I grabbed the bow and arrow, stalked the bunny from behind a bush, and took a shot. I hit it! The bunny screamed! It flipped upside down and flailed about wildly. It was a glancing blow, the arrow went through its arm and the rabbit shook it free. Then it sat upright, arrow removed, but injured. Now's the time where I have to go and kill it with my bare hands, but Maggie's watching, I hesitated, I picked the arrow back up and took another shot. It missed and the bunny ran. I chased it and chased it but it found its way into some thick bushes and after a long pursuit, I finally gave up, defeated. I felt bad leaving the bunny injured but I know it will be food for some animal now. It was good for a little adrenaline to start the day! Wish we could have eaten it.

After that we went to Dinosaur monument. It looked like the Escalante monument in Utah, the land was all chopped up. 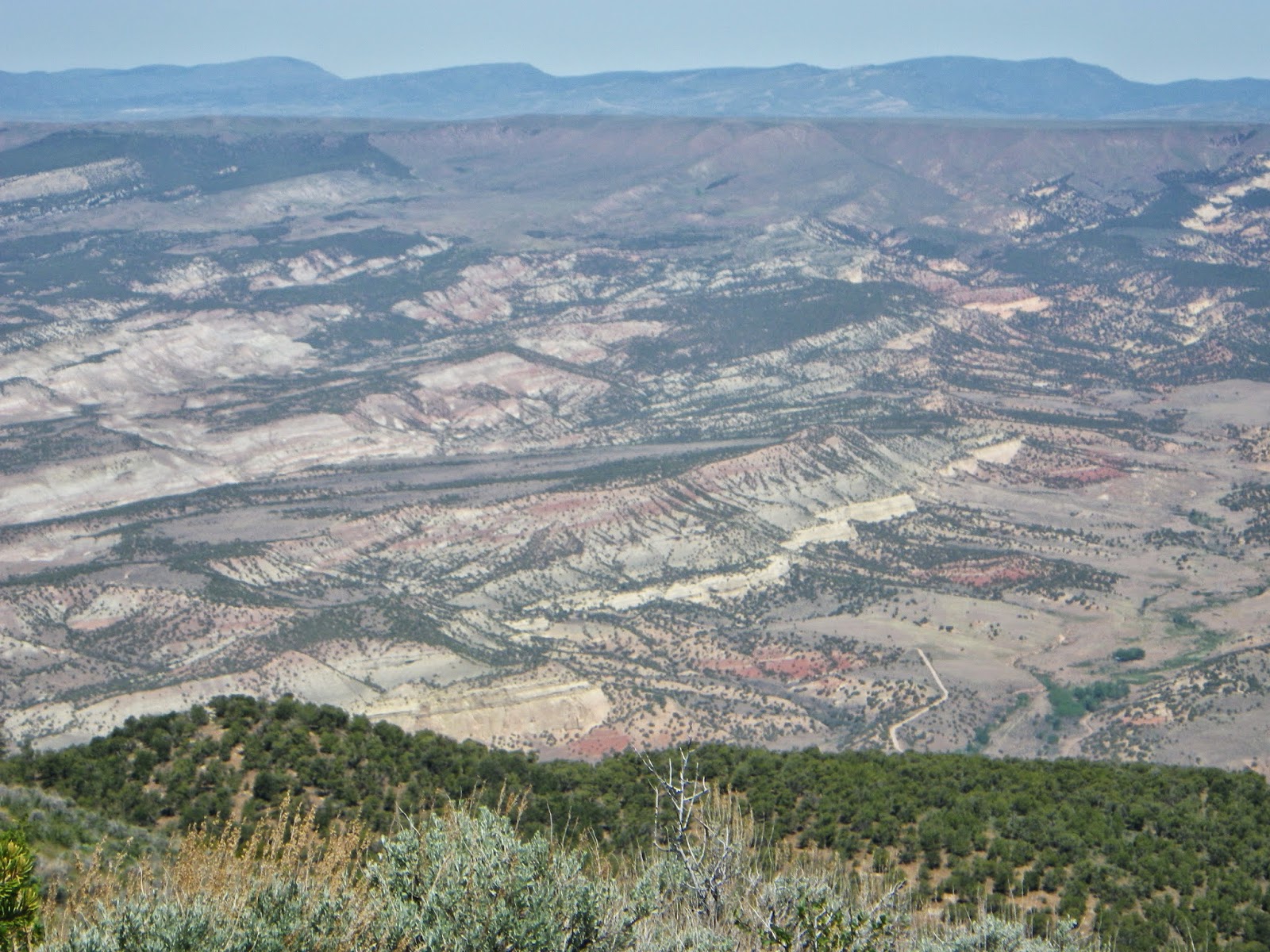 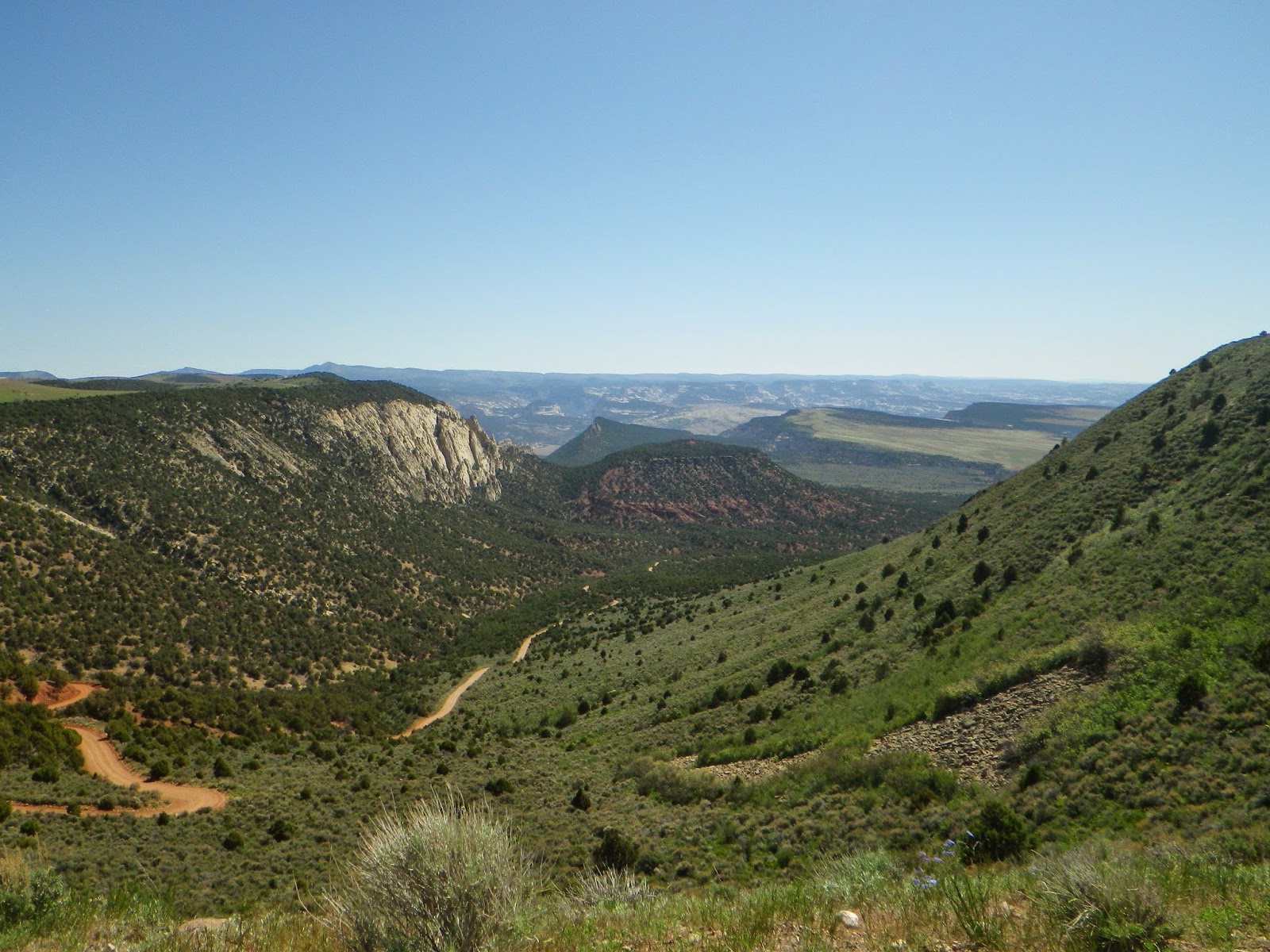 There was nobody there, we were completely alone all day. It was impressive lots of red and orange rocks all frosted with green grass and dotted with sage brush, and small juniper trees. A deep canyon sliced through the middle of the orange rock. All day we were high in the air, looking down one overlook after the next. Kind of like the Grand Canyon except more scenic and we were in the only souls there to speak of. 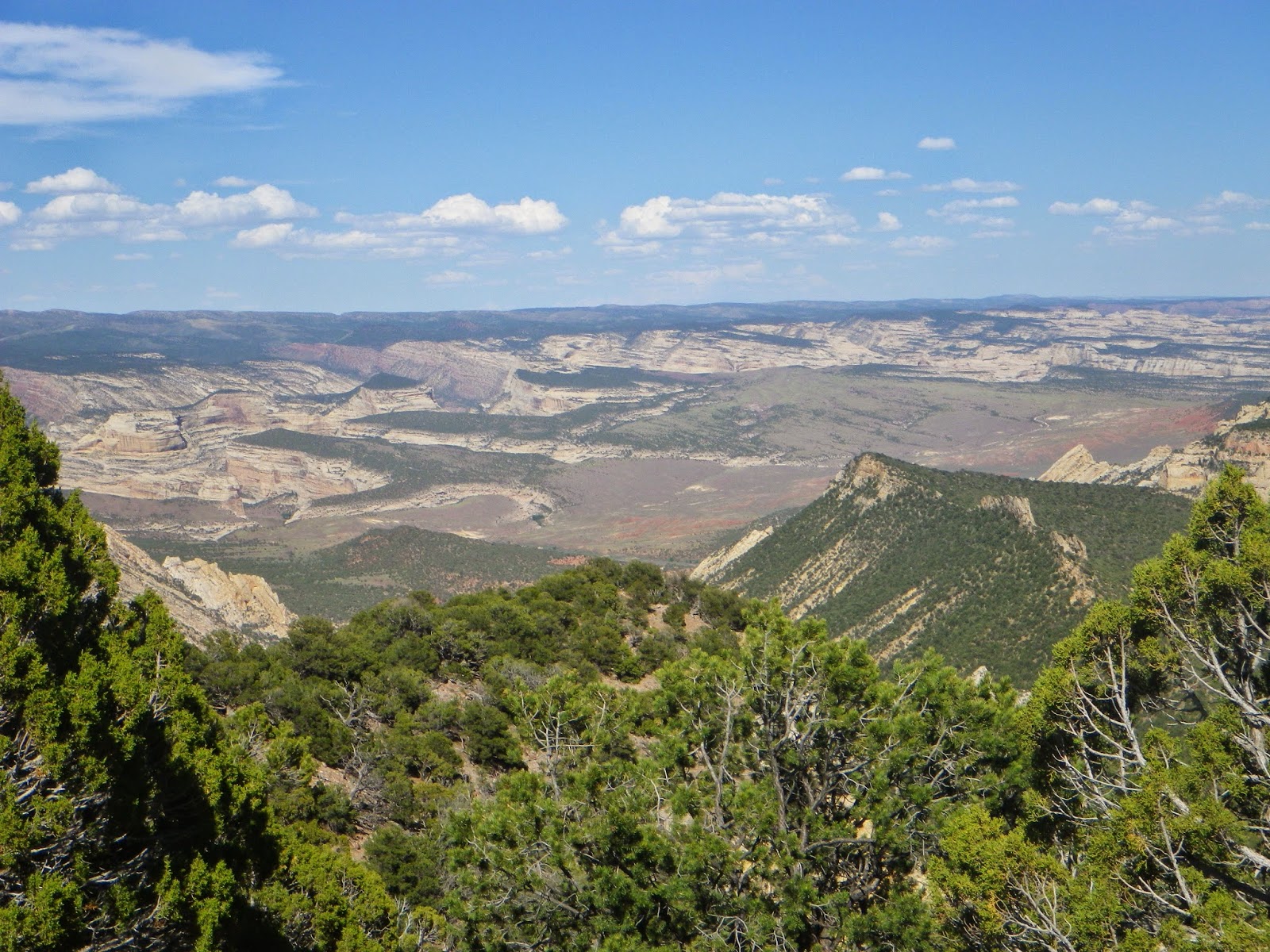 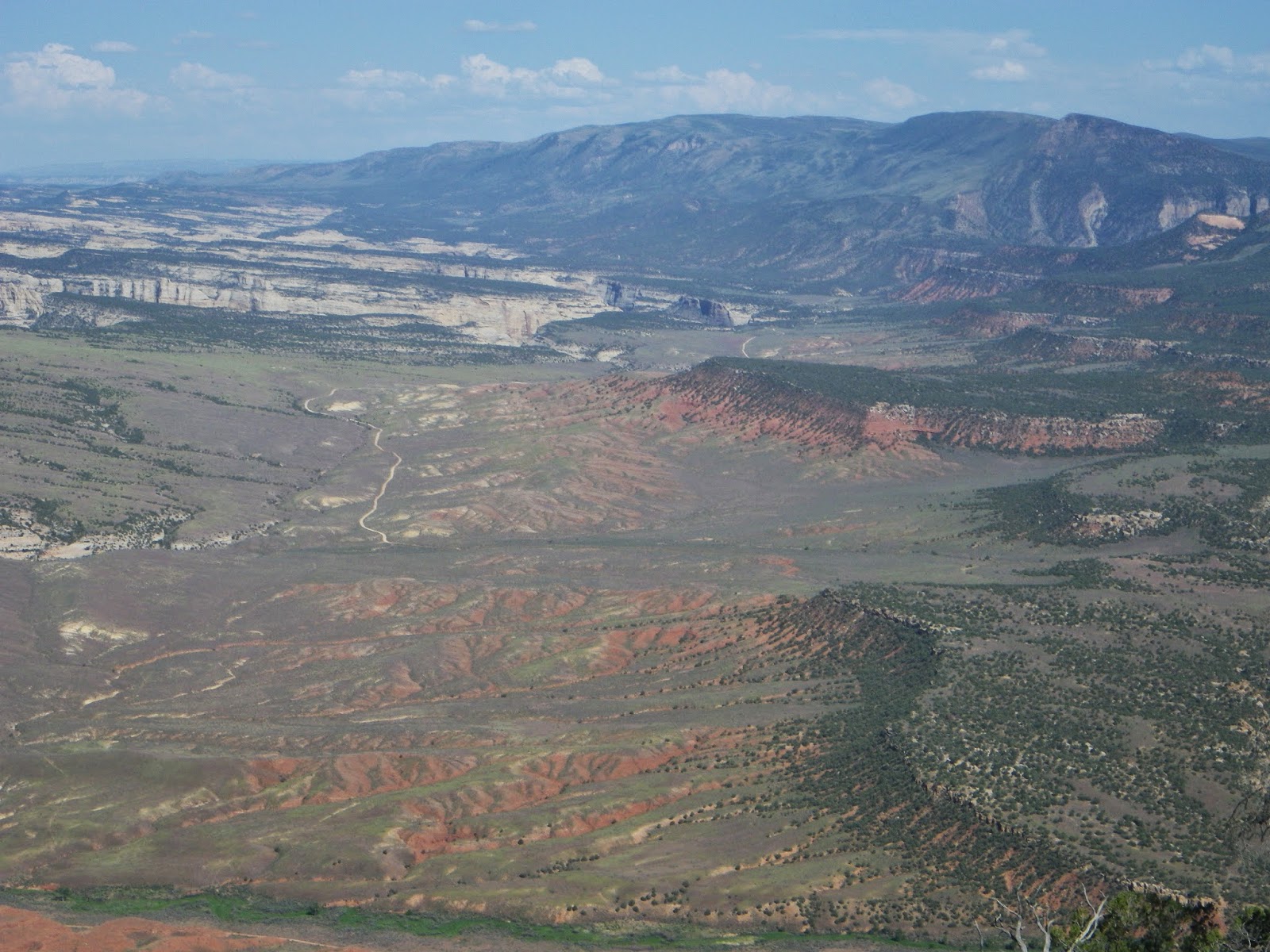 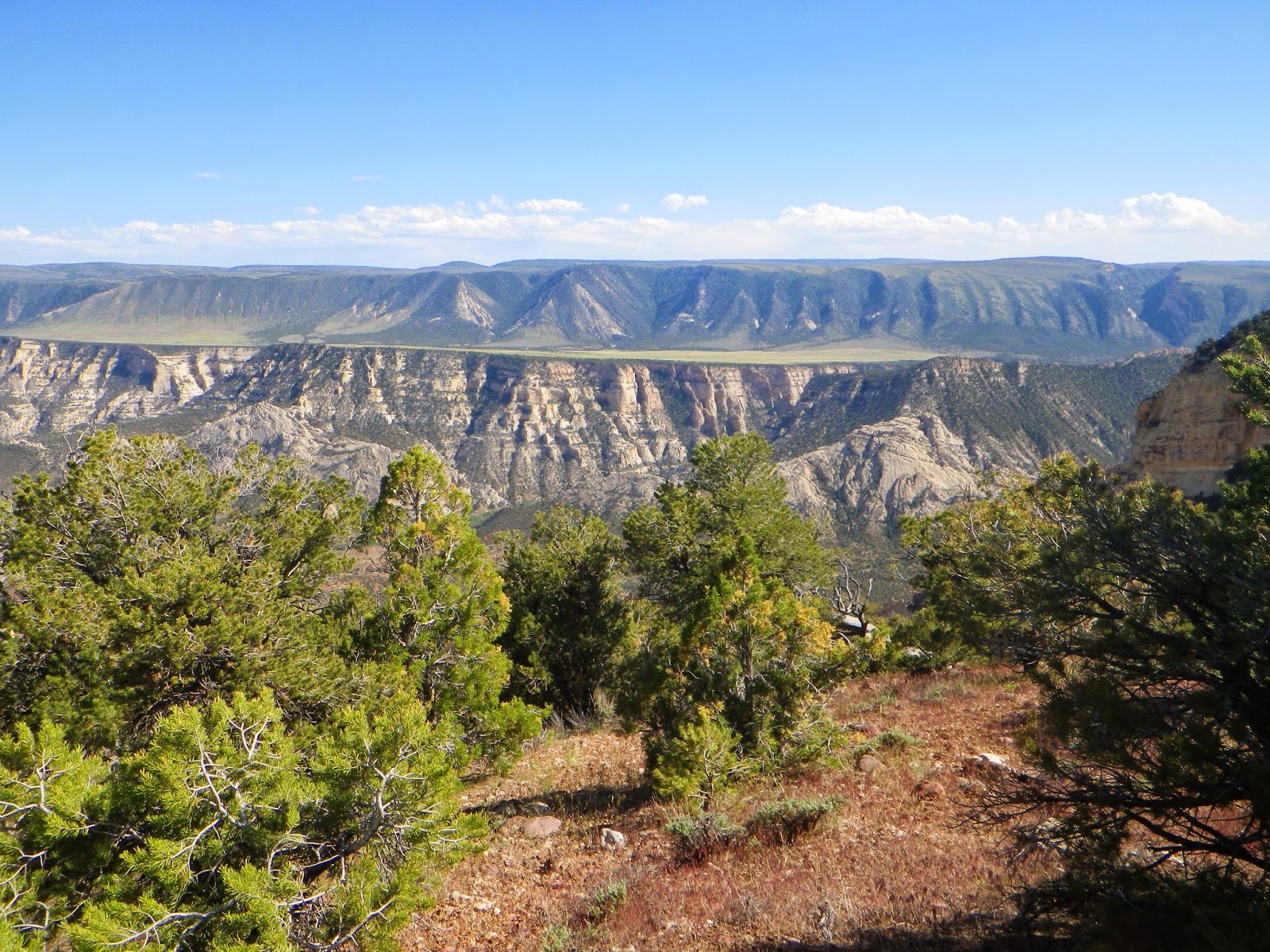 We weren't still in Colorado, actually the park is half in Utah. The Wyoming and Idaho borders aren't far and equally empty. The state borders only serve to arbitrarily divide up this no man's land. This isn't Colorado or Utah, this is Dinosaur. The Great Basin desert. 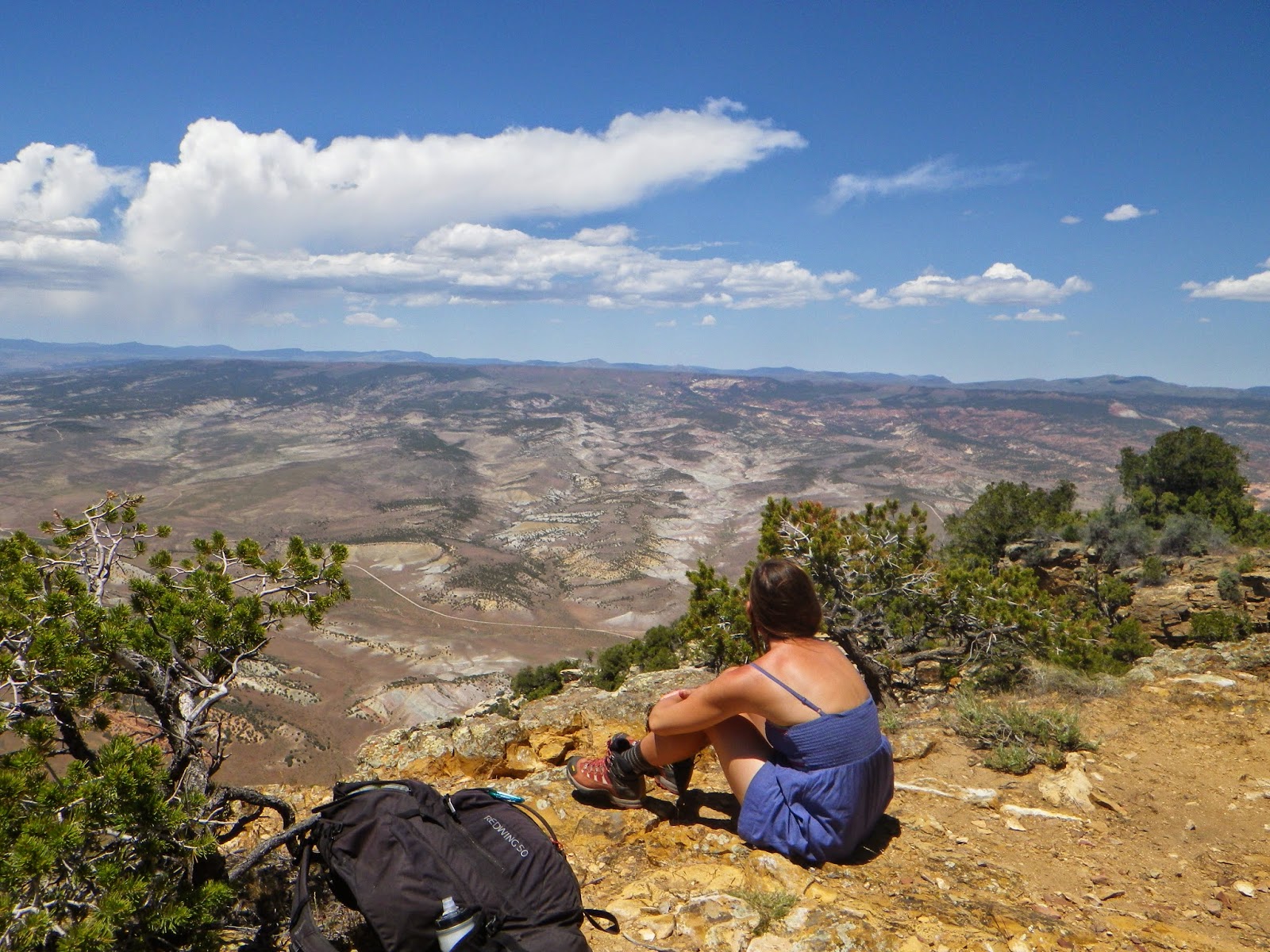 We hiked a four mile trail to ruple point with fully loaded packs. It was a good exercise, the trail wasn't too long or too short. We had been quiet all day though, maybe still a little fatigued from the day before. We weren't very lively! We gazed down awestruck at the Green River as it cuts its magnificent canyon through the Split Mountain. We were standing on top of one piece of this mountain but the canyon literally split it down the middle, cutting it into three mountains, all with sheer cliff faces falling away to the river. There were little people floating in rafts far below. 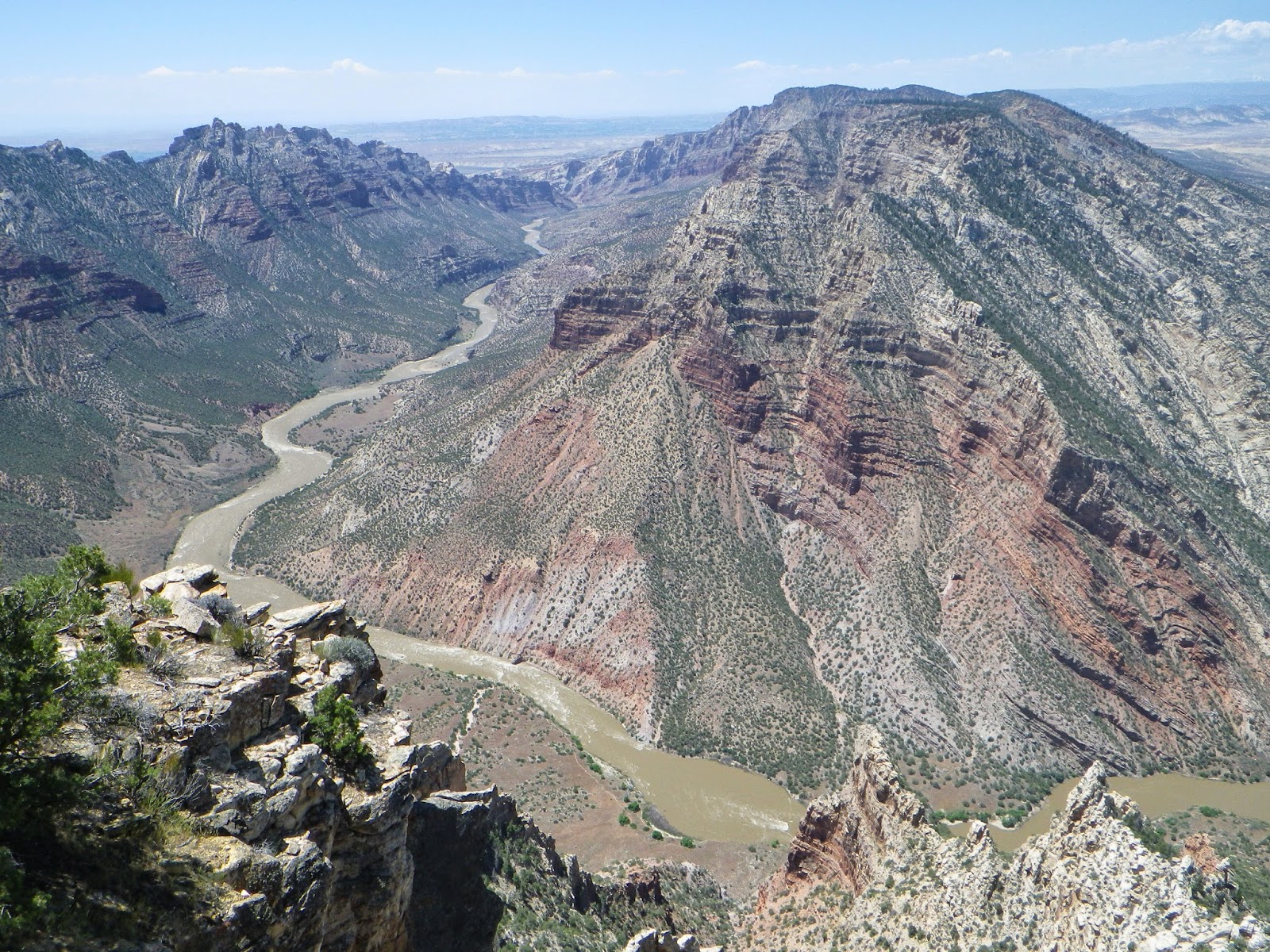 We decided on the hike back, let's drive! So after a little more exploring we hit the highway to Salt Lake. We drove for four or five hours through beautiful NE Utah, the Wasatch Mountains. There were small towns, an Indian reservations. Lakes and reservoirs. Red rock and aspen trees. The sun set on us and it was dark as we got to Park City. The little lights of the ski resorts and the expensive towns built into the mountains sparkling down on us on Interstate 80 again. 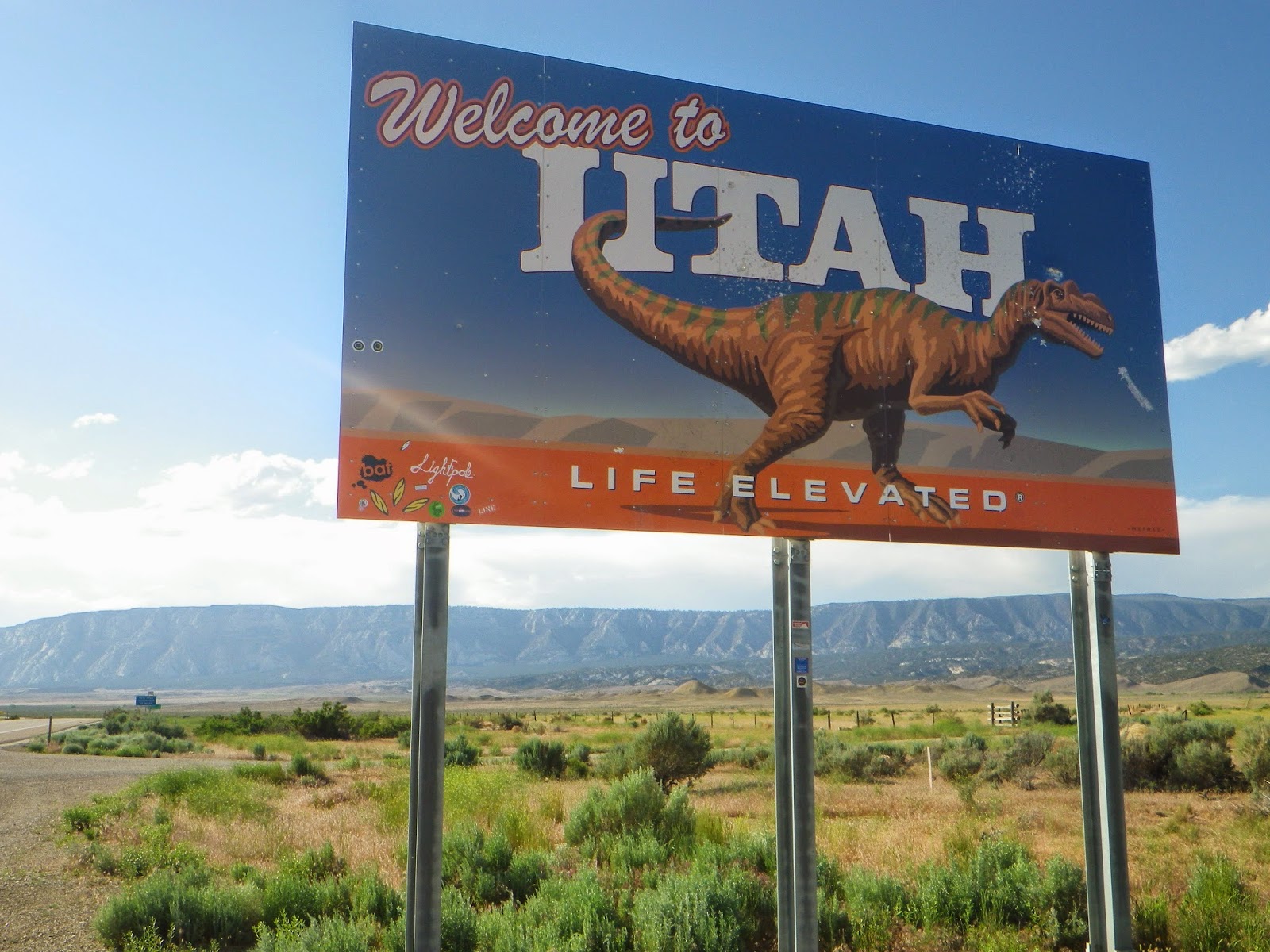 Then we came around the mountain to the Salt Lake City and its lights gleamed as far as the eye could see. We passed through it, past the temple and the skyscrapers, past factories and salt refineries, the stench of the Great Salt Lake filling our noses. We turned on a spooky industrial highway exit off 80 and I found a familiar causeway. We drove it across the shallow lake and salt flats out to Stansbury Island. An island we stayed on with Lars on our Utah trip last October, out in the Salt Lake. Its got big mountains. We parked in the same spot we had the last time! That was cool, but we were exhausted from the drive, it was midnight.

The next day blended into the last we were still driving. We woke hot and buggy at Stansbury Island, the mosquitoes fierce. The stench of salt and marshes heavy in the hot desert air. We drove far across the Great Salt desert which was pure white and sparkling likes snow. 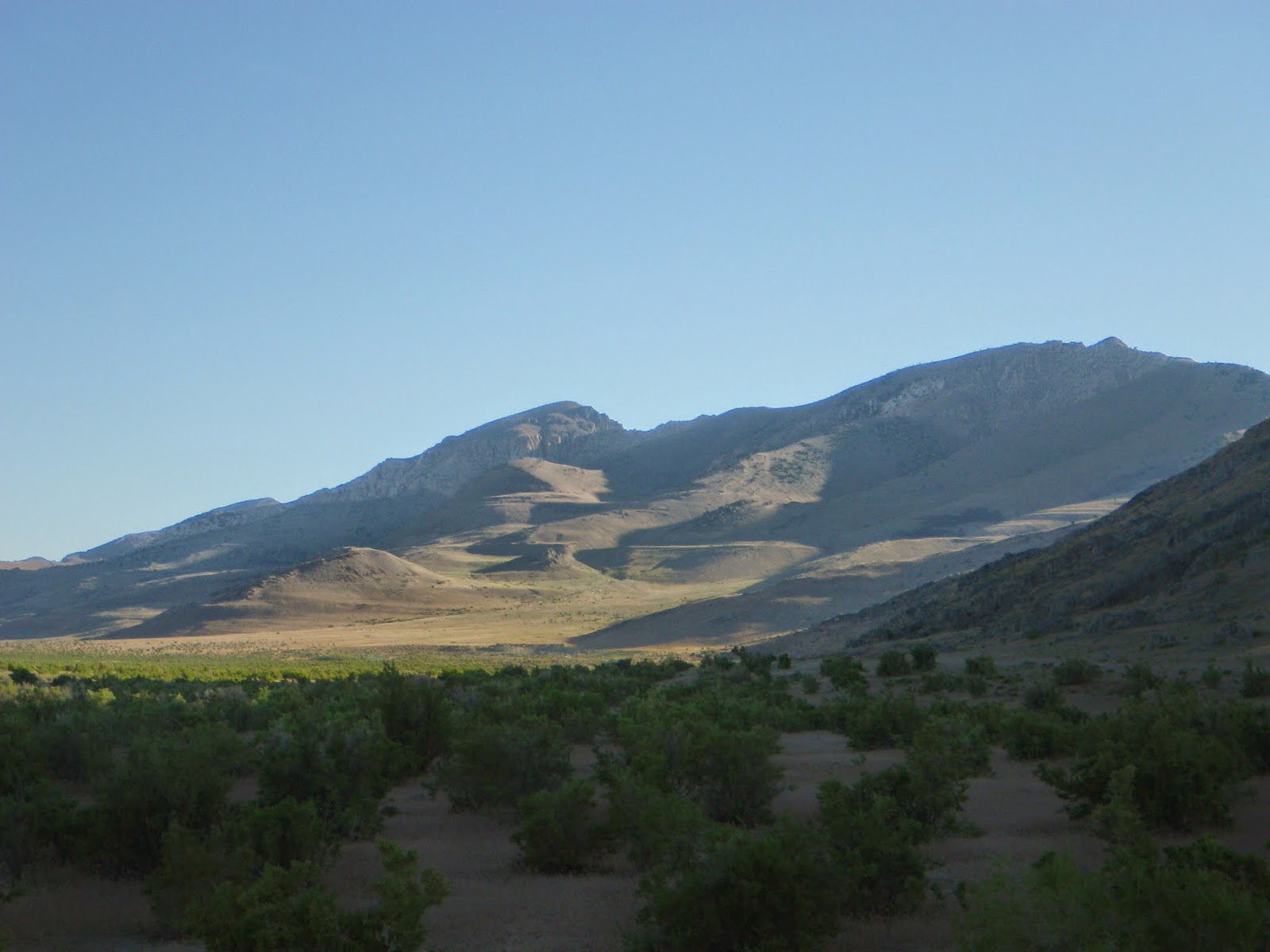 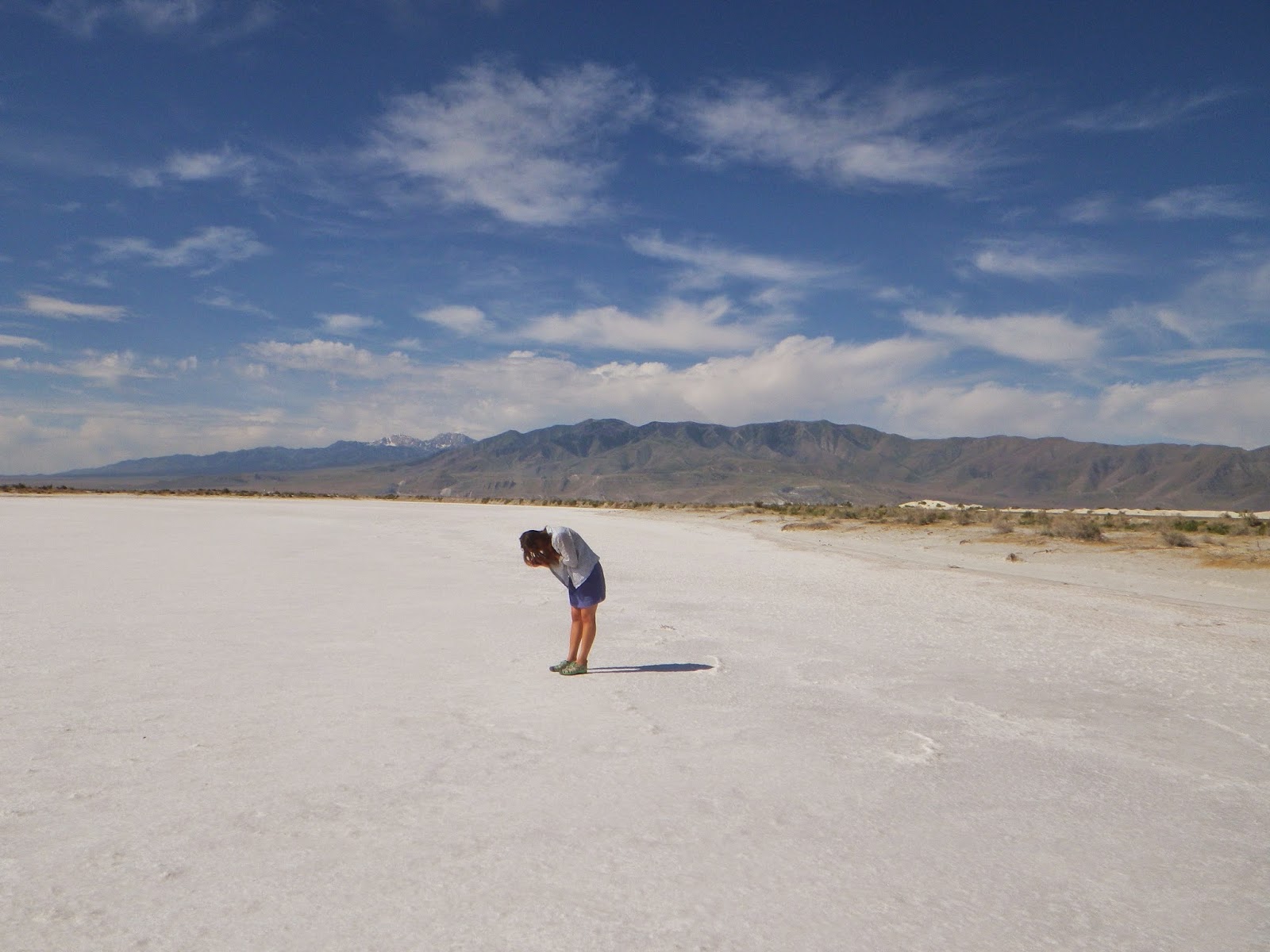 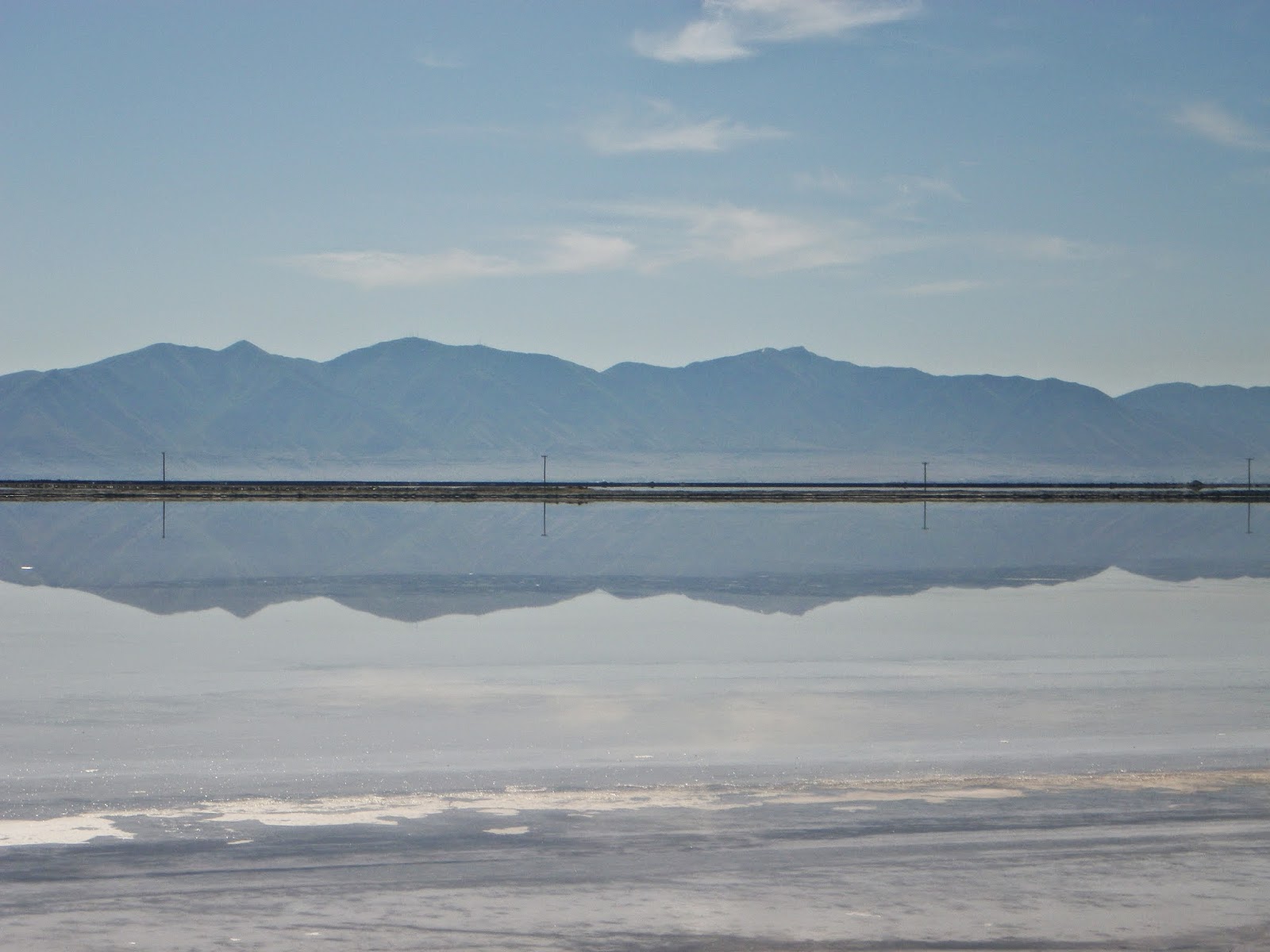 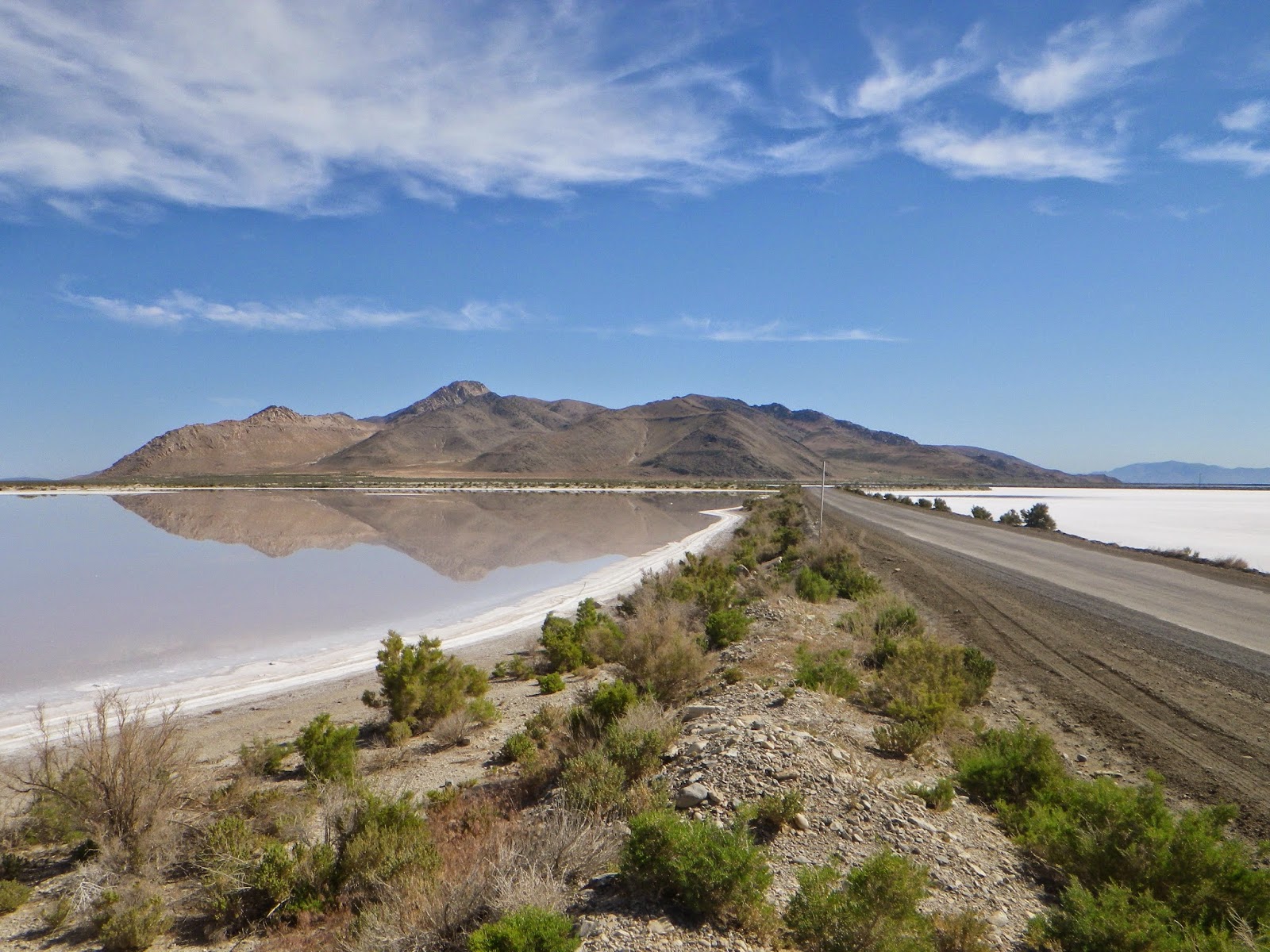 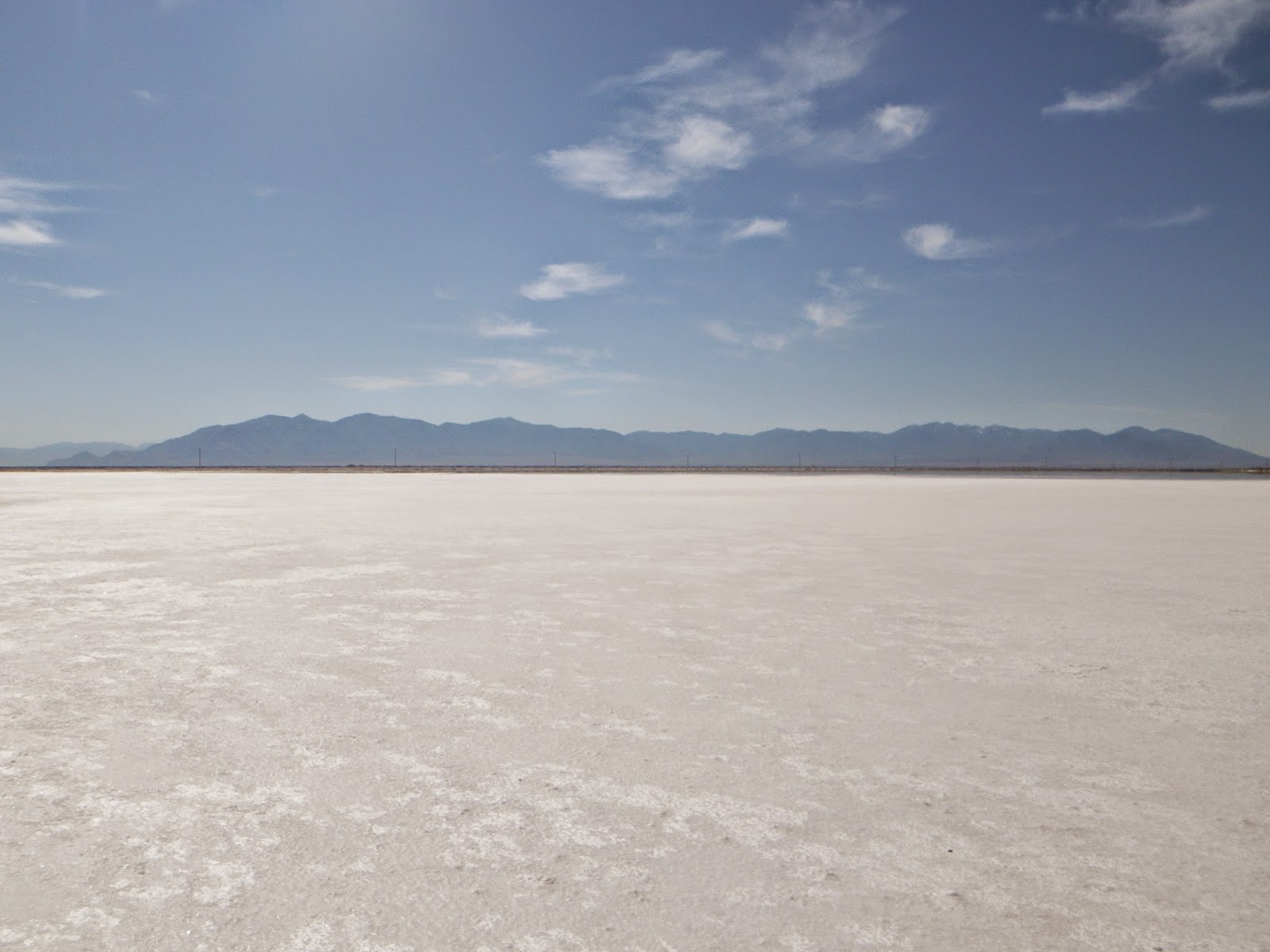 At the town of Wendover we decided on the scenic route! We headed 120 miles without services to Ely,  Nevada.  A very cute little town where begins "the Loneliest Road." And lonely it was. We found some free hot showers at a lonely RV park! What a treat we really needed them. 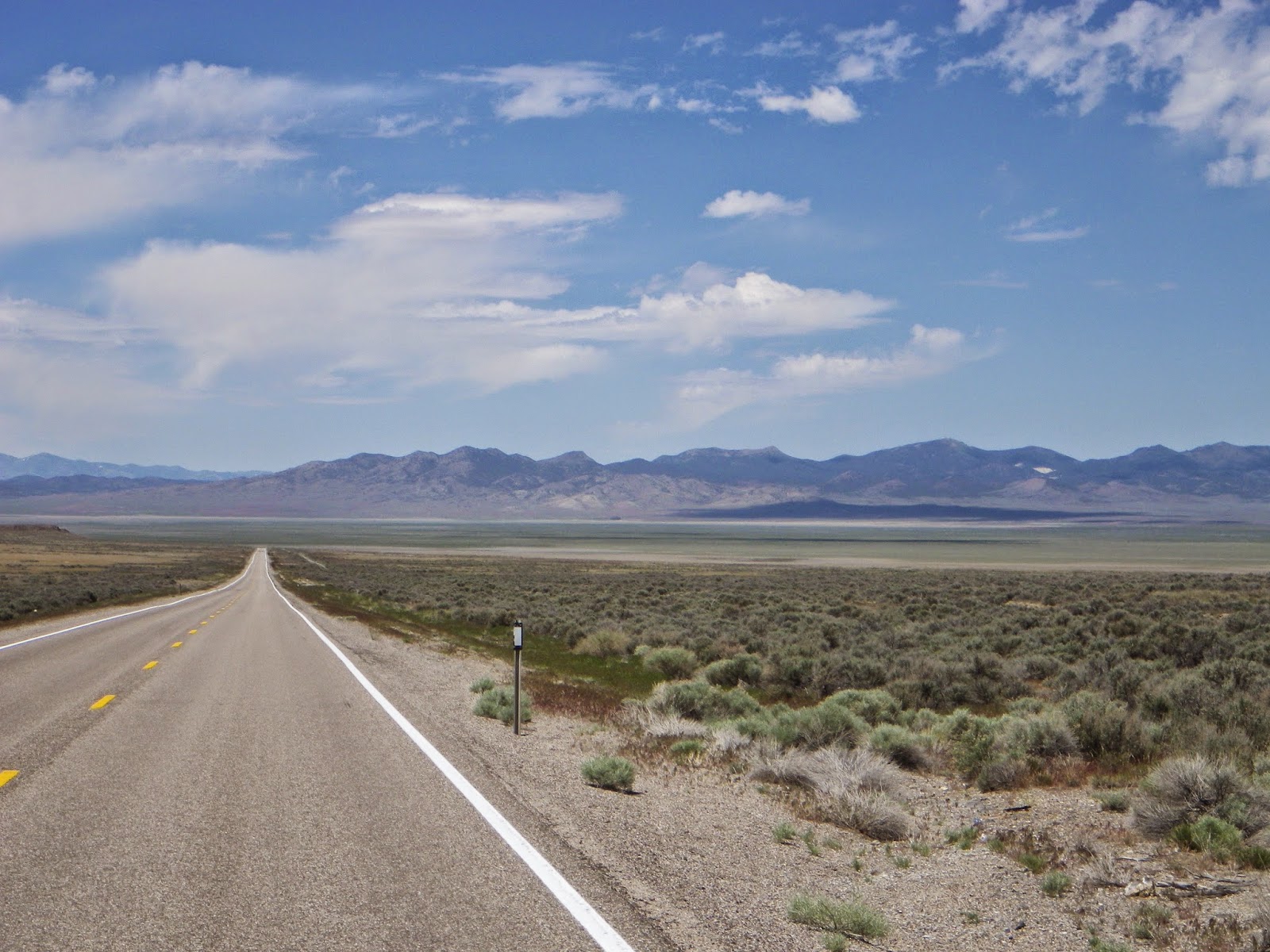 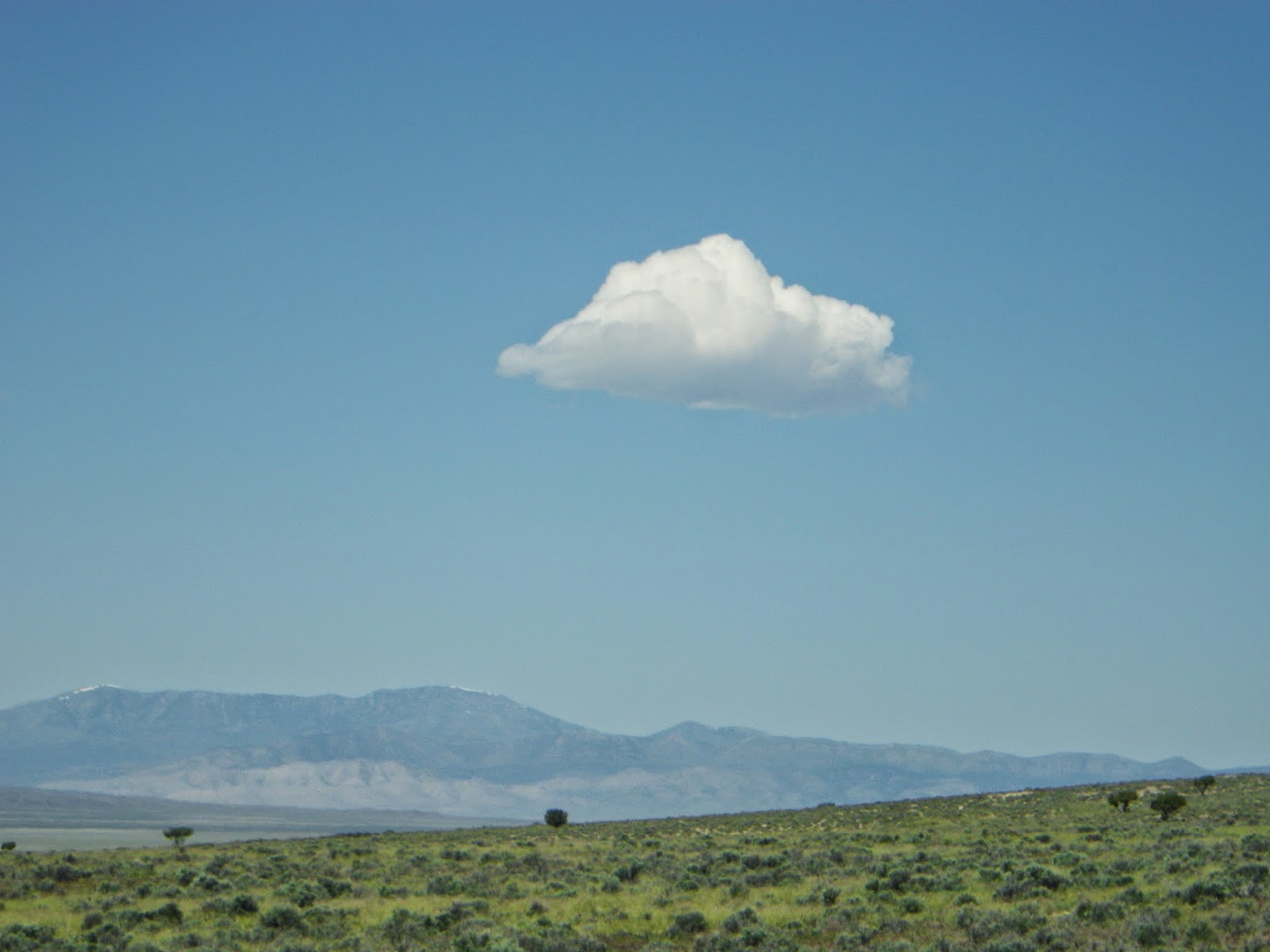 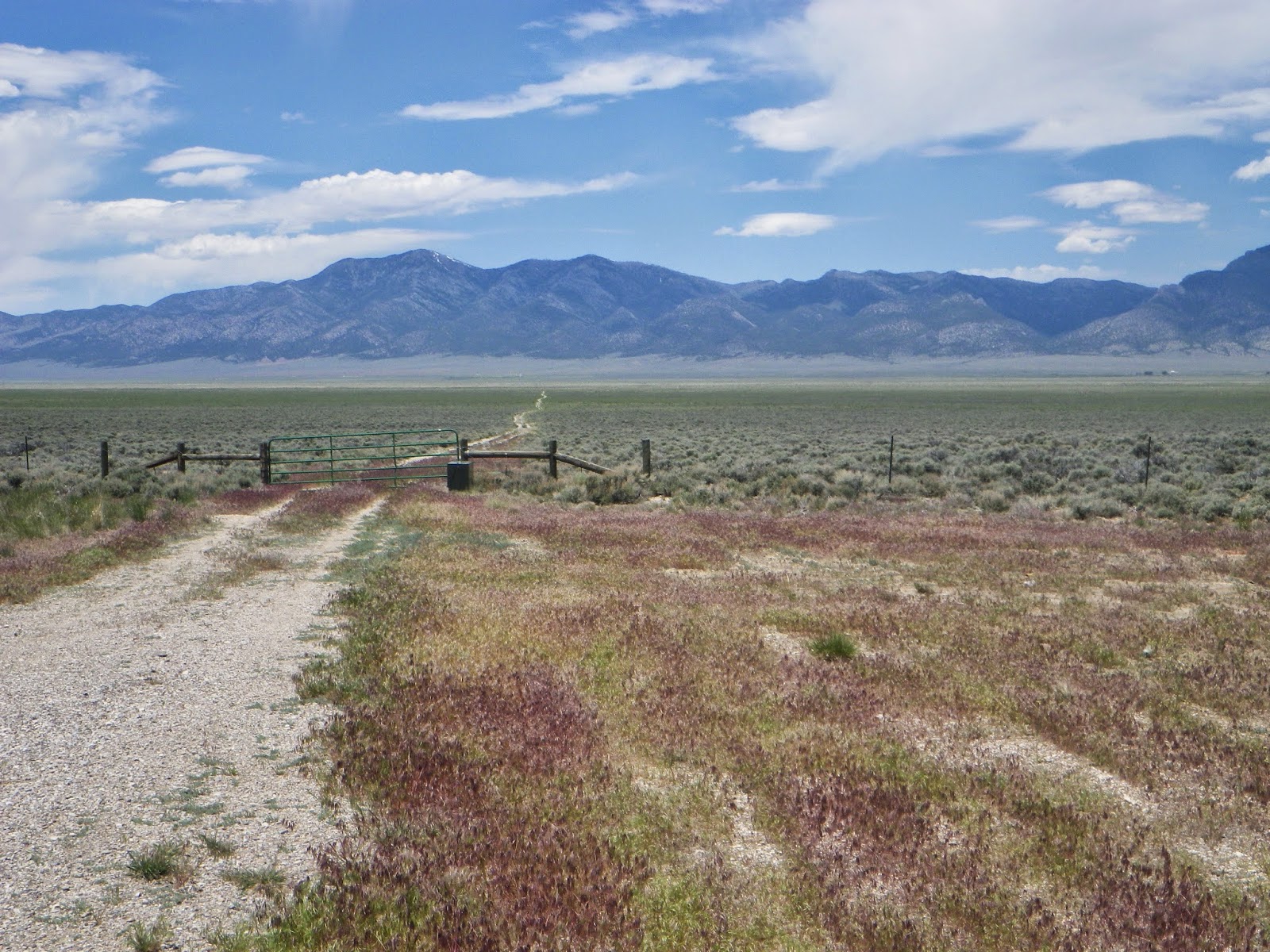 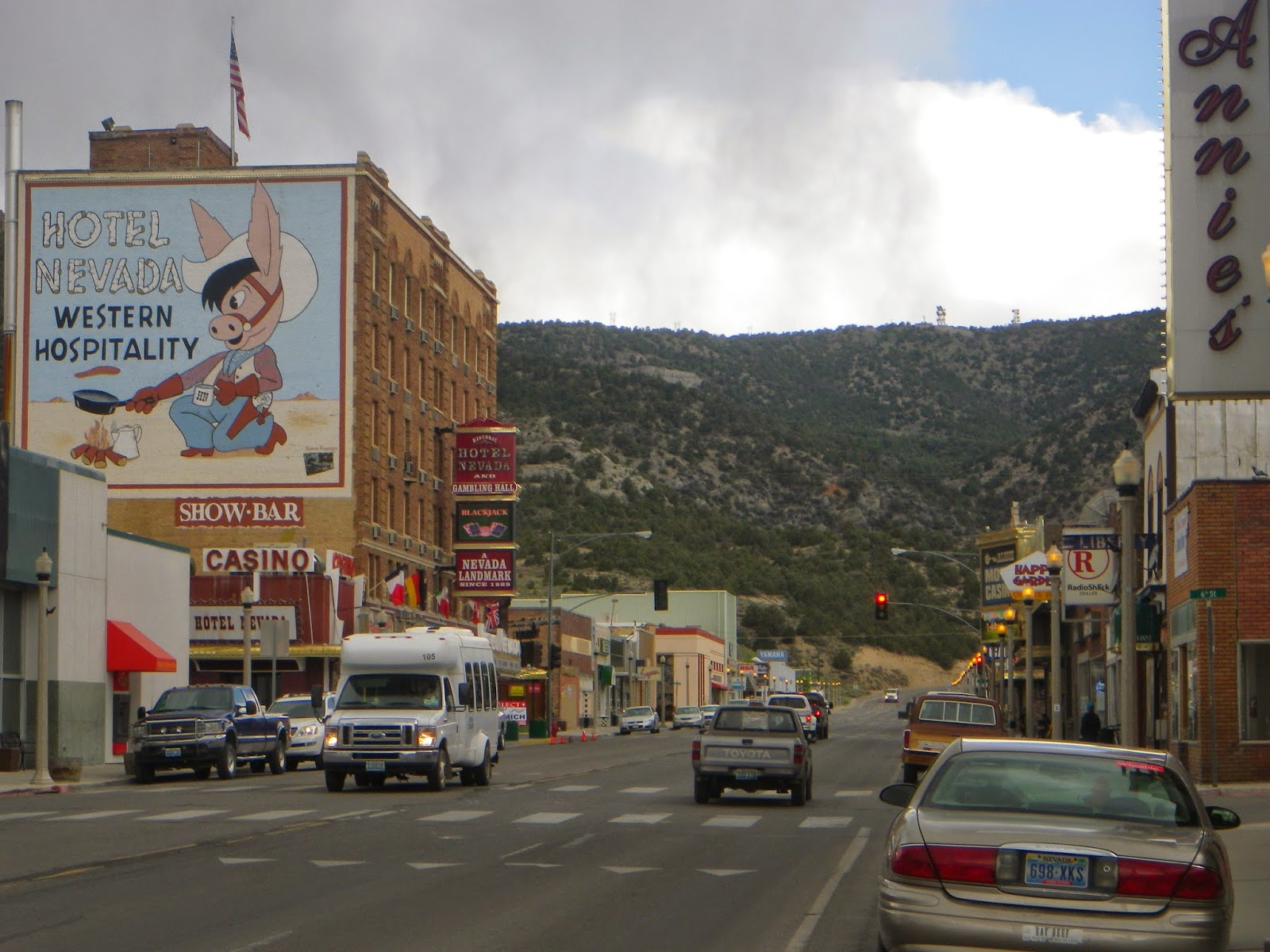 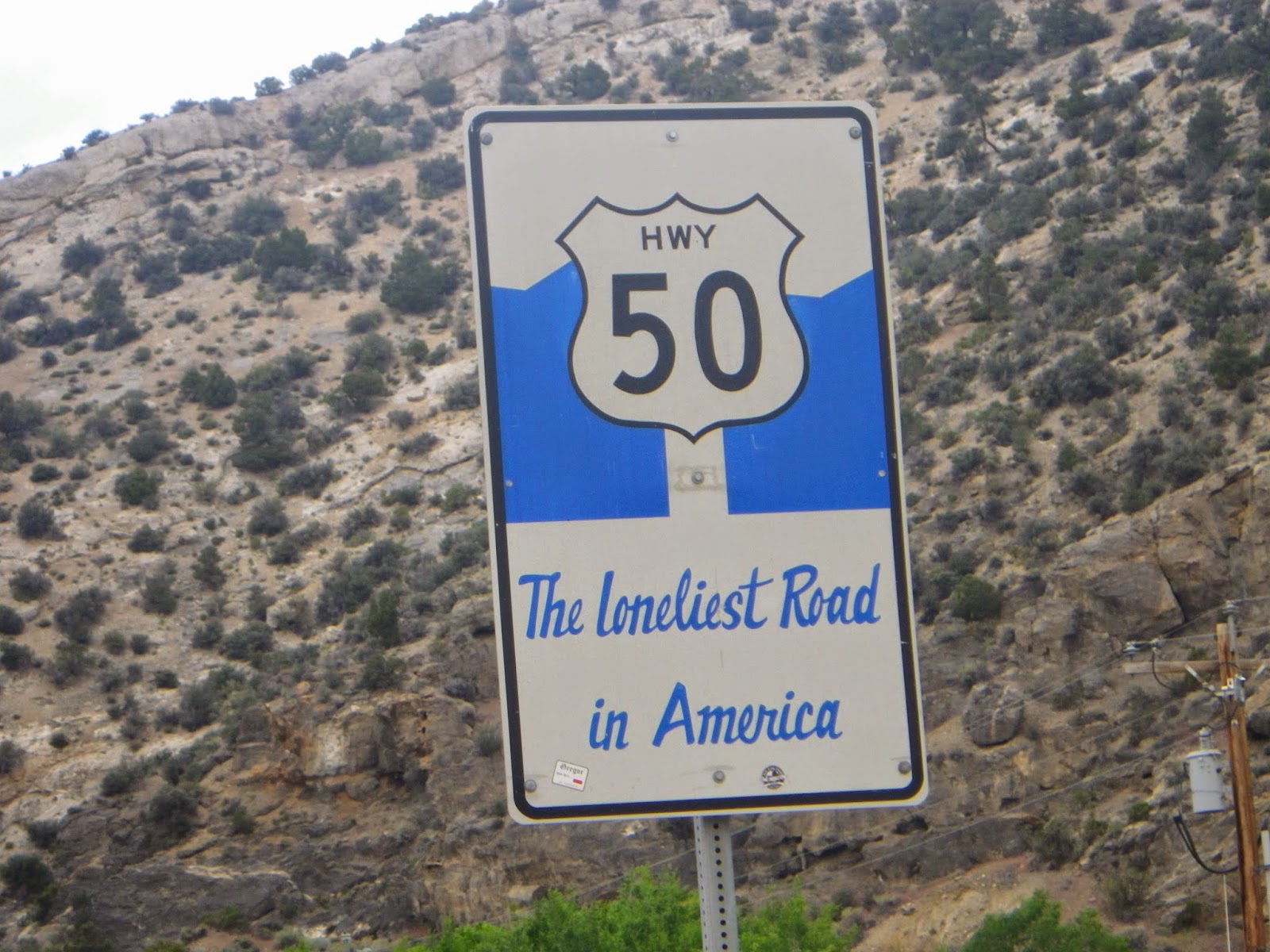 The road was so beautiful it would climb a mountain range and then cross valley, climb a range, cross a valley. The scenery was unique to Nevada. It was dry but forested and grassy. Peaceful and quiet. Untouched, pristine wilderness and there was almost no traffic to speak of for hours at a time. 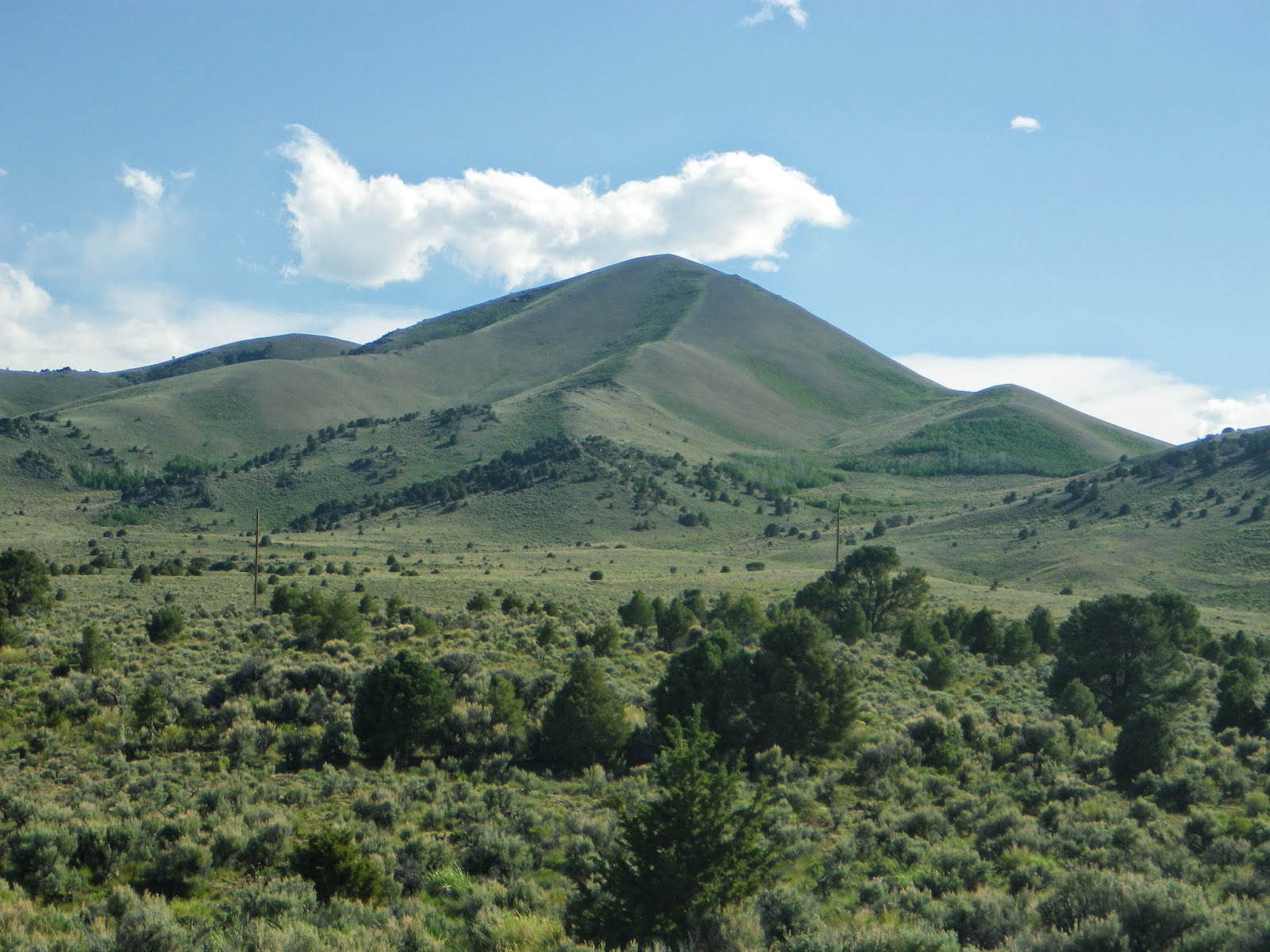 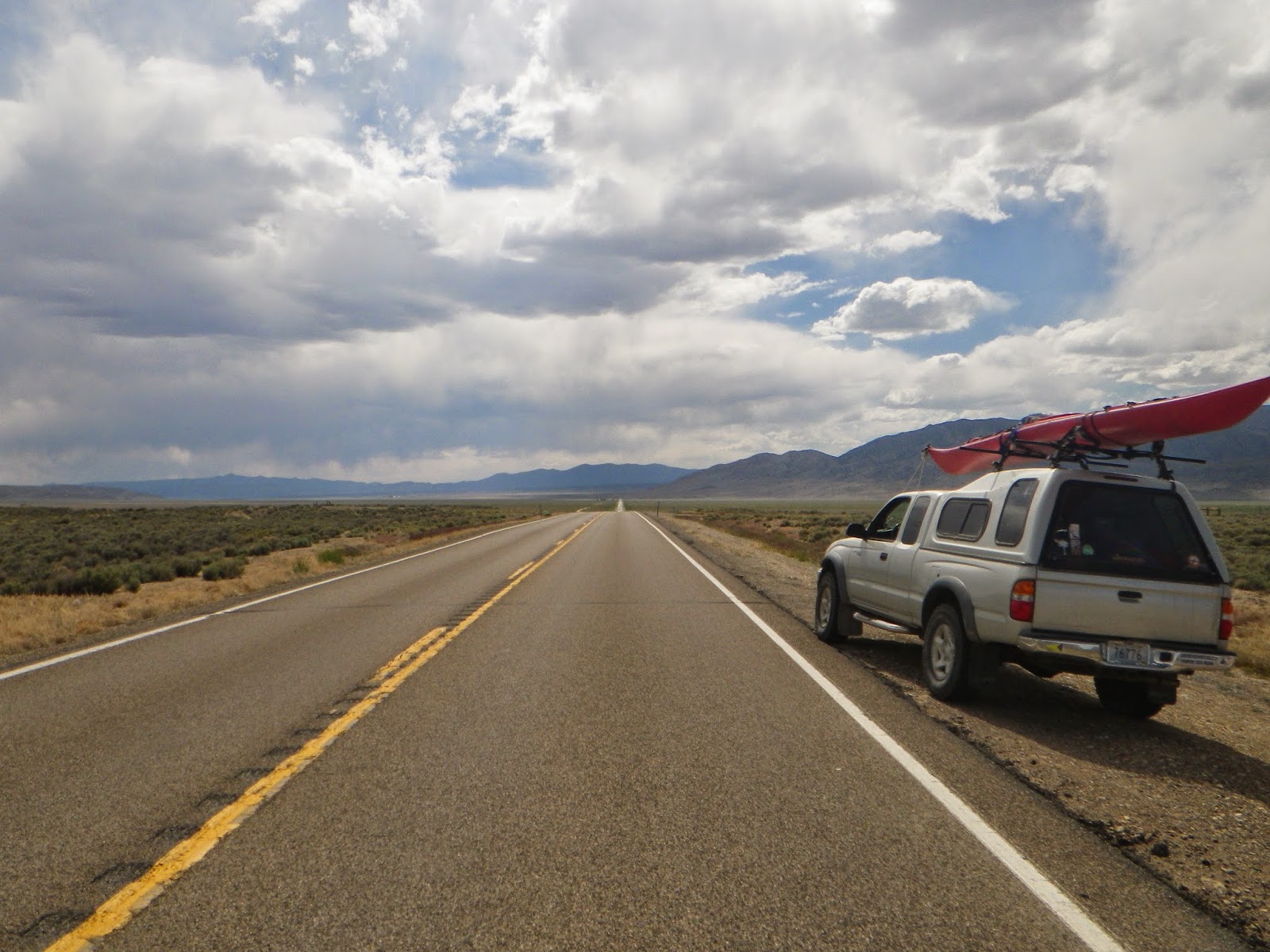 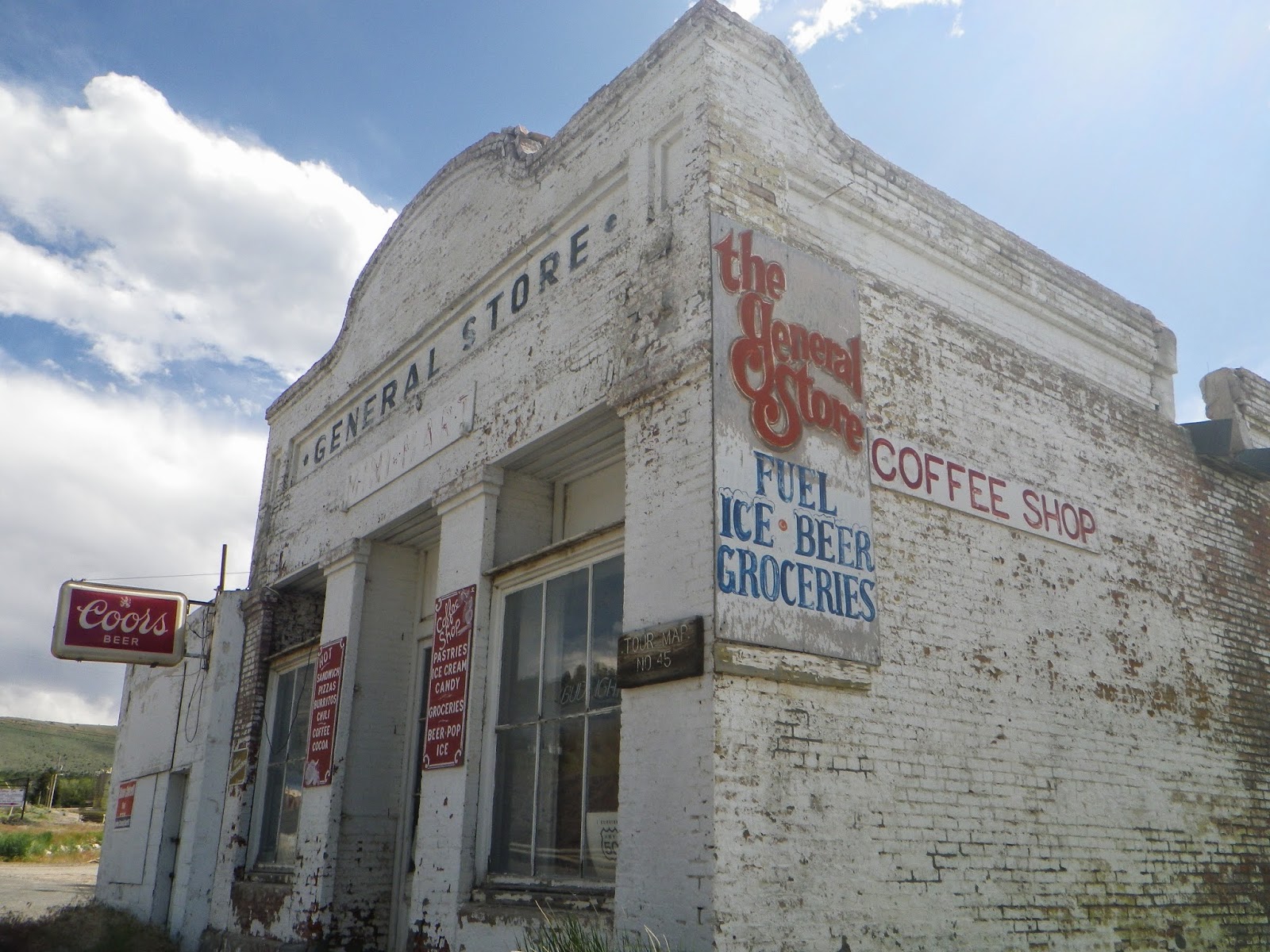 We drove through only two tiny towns within 400 miles. there were a couple of trees out in the desert decorated with shoes. 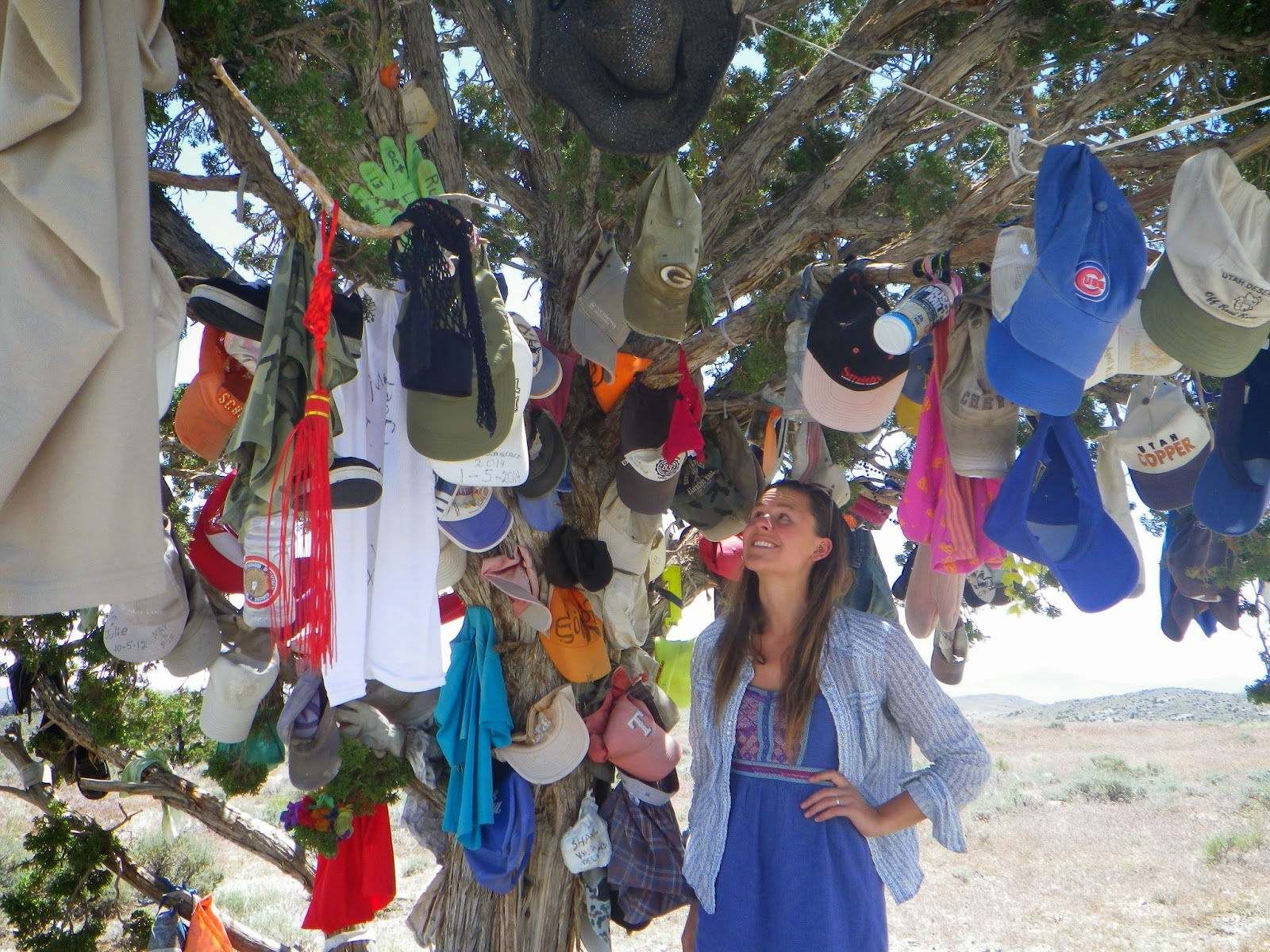 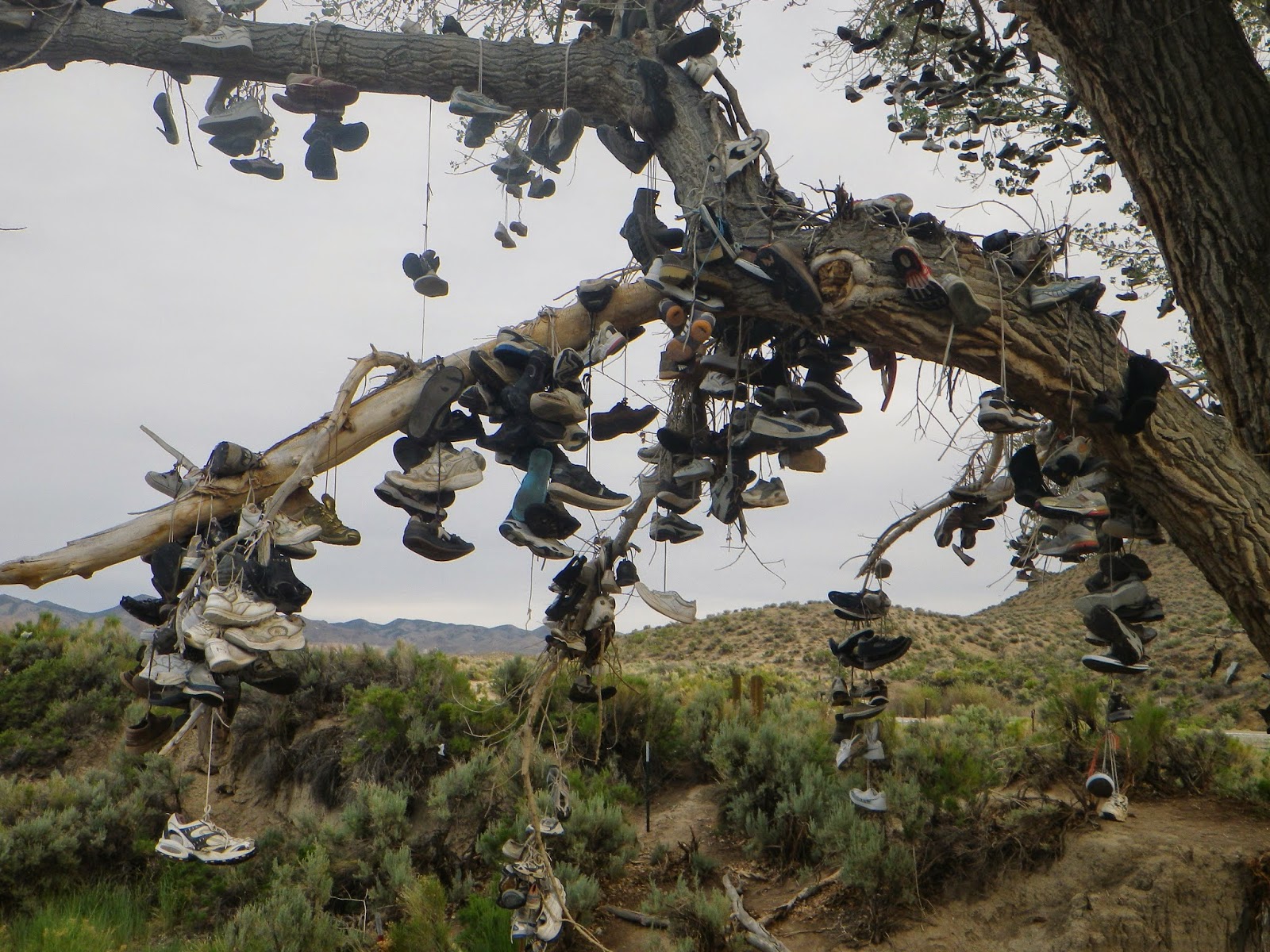 The traffic was bad and people were driving erratically on the fast-paced highway as we passed green and purple and red lit skyscrapers, and flashing gaudy casinos. Maggie became quite tense as we avoided three accidents in a row due to debris in the road and insane speeding motorcycles. The darkness of 395 calmed her again although we both were very ready to be done with this journey we had been driving far too long, over 12 hours. 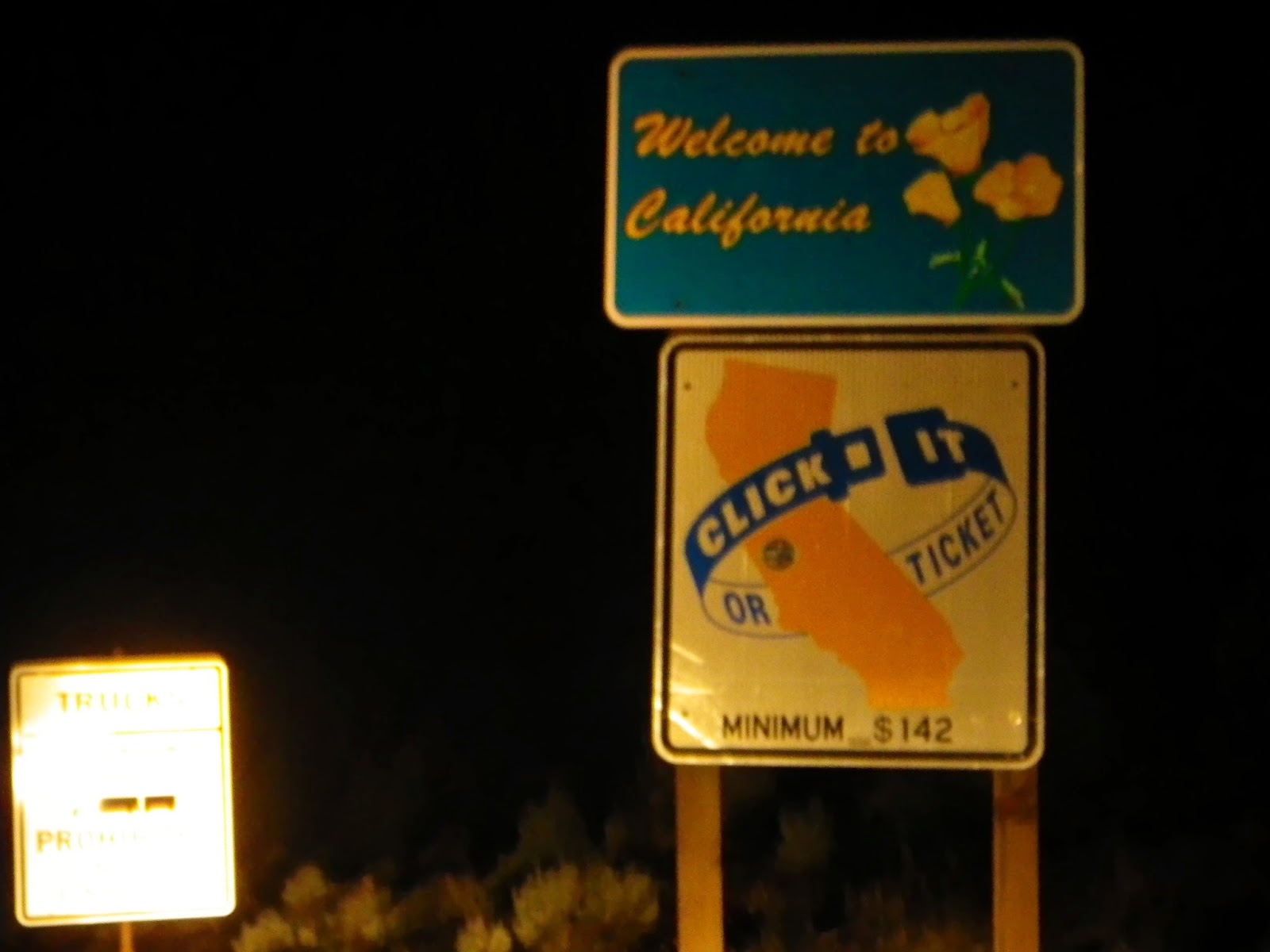 We drove finally at long last over the dark and windy Devil's Gate mountain pass to drop into Bridgeport. The town me and Maggie met in last January when she came to live with me. It was 1am but we had gained an hour so to us it felt like 2 a.m. And we had been driving since right when we awoke in the Salt Lake. We pulled up to our destination at the foot of the beautiful Twin Lakes in the Sierra Nevadas. A place we have been together before once and have such fond memories of.

We fell asleep very very fast and we're awoken from strange dreams by bear opening the back window of the cab with his nose. Adrenaline surged but we fell right back asleep after we both caught a quick glimpse of the black bears silhouette in the moonlight.
Posted by Unknown at 9:15 PM