We woke up to this stunning and grand landscape at a lake basin south of Donahue pass in the High Sierra. 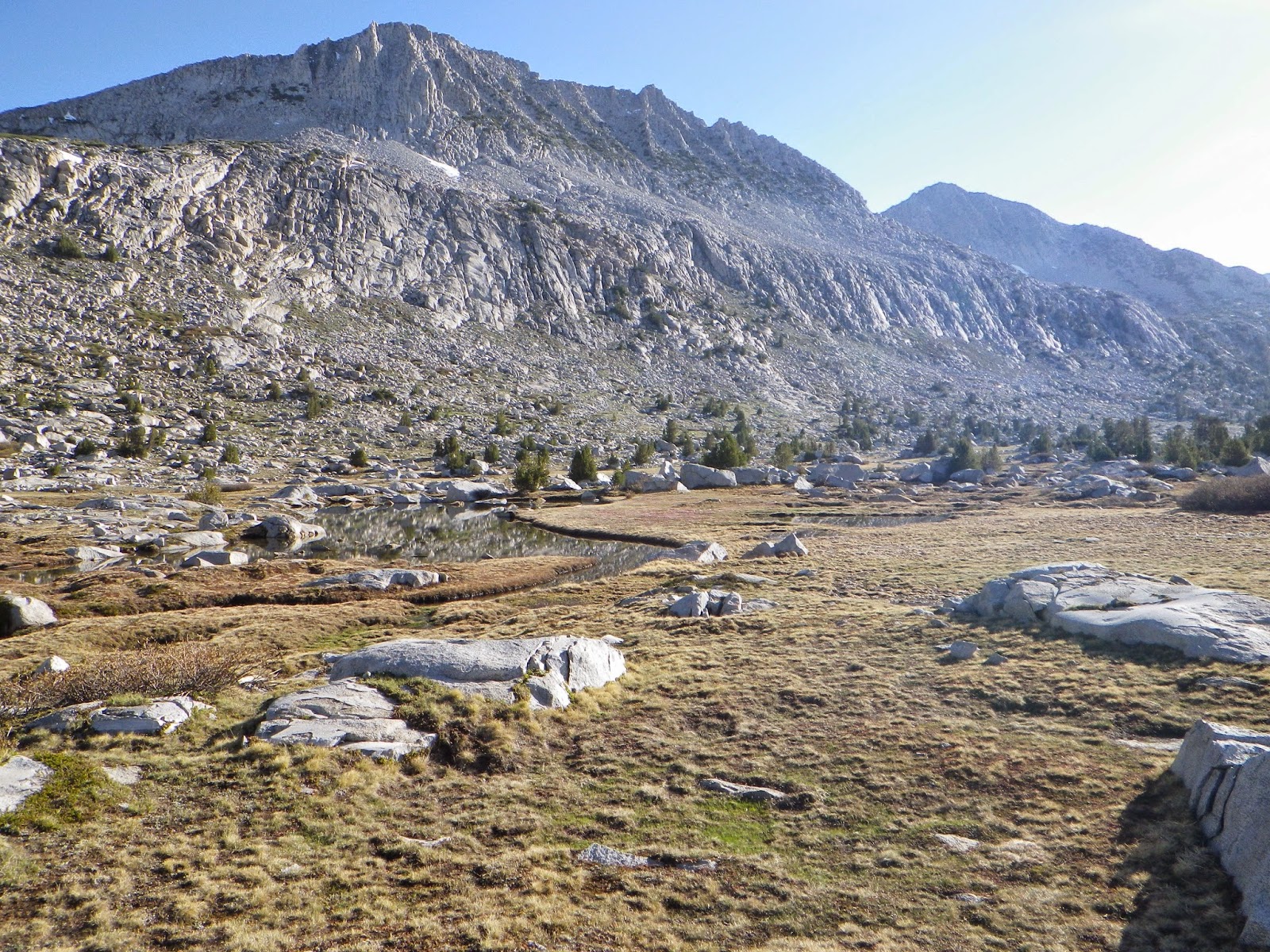 The marmots were frolicking around and they did not steal our food! We packed up camp and hiked. We had to climb up a little first before our long, long descent. It was such a beautiful day, we both felt refreshed. You sleep better at higher elevation for some peculiar reason. 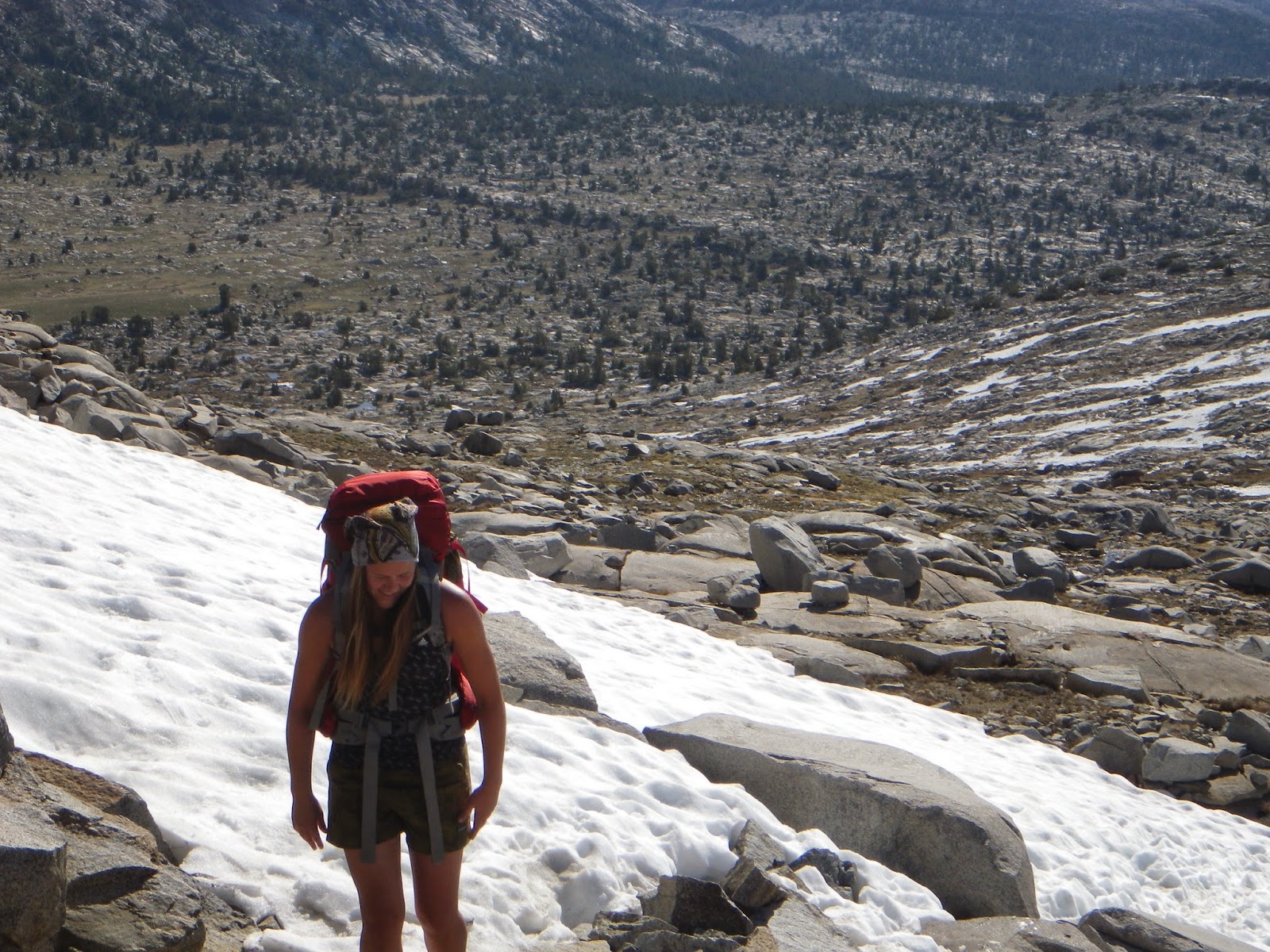 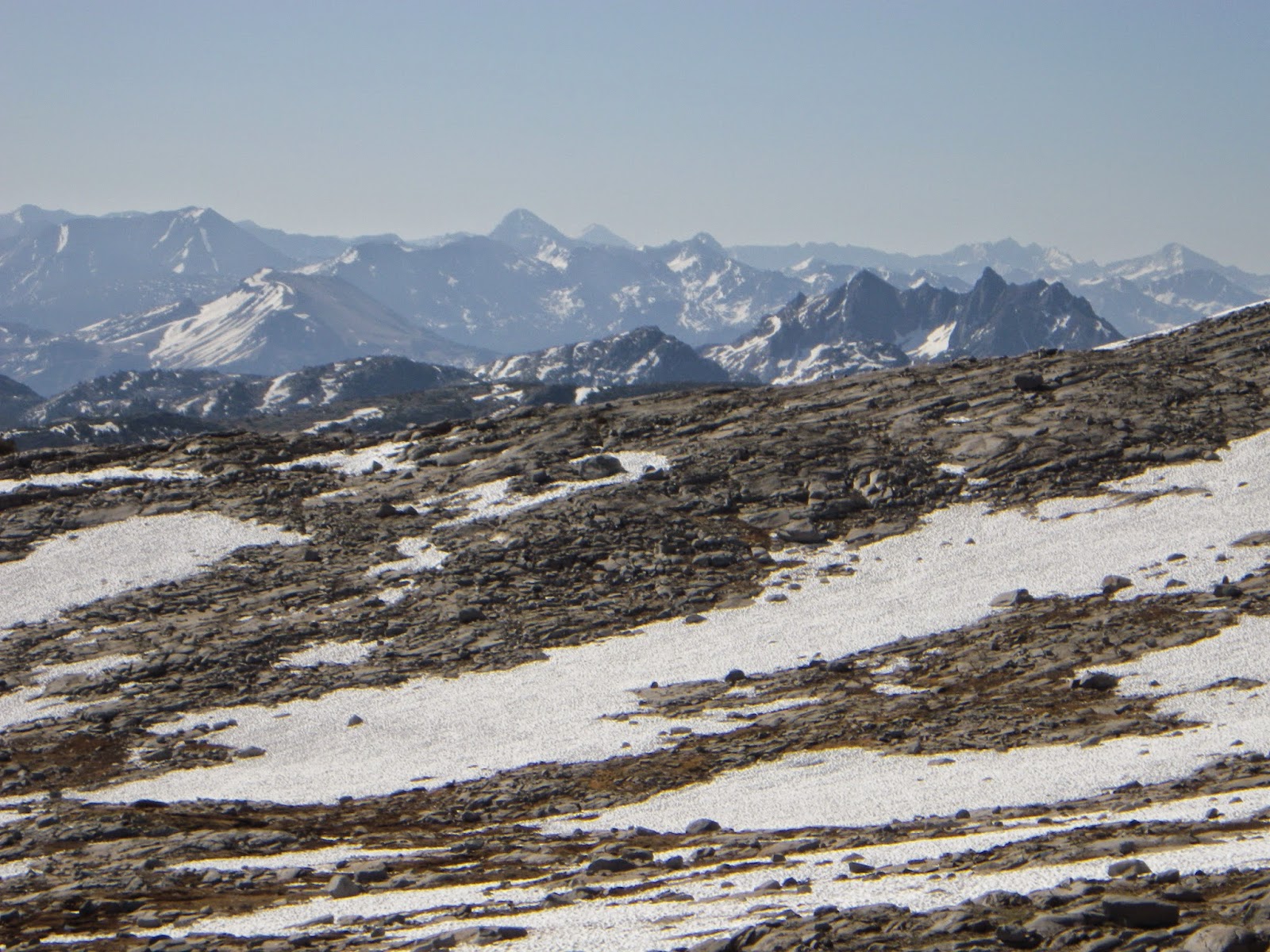 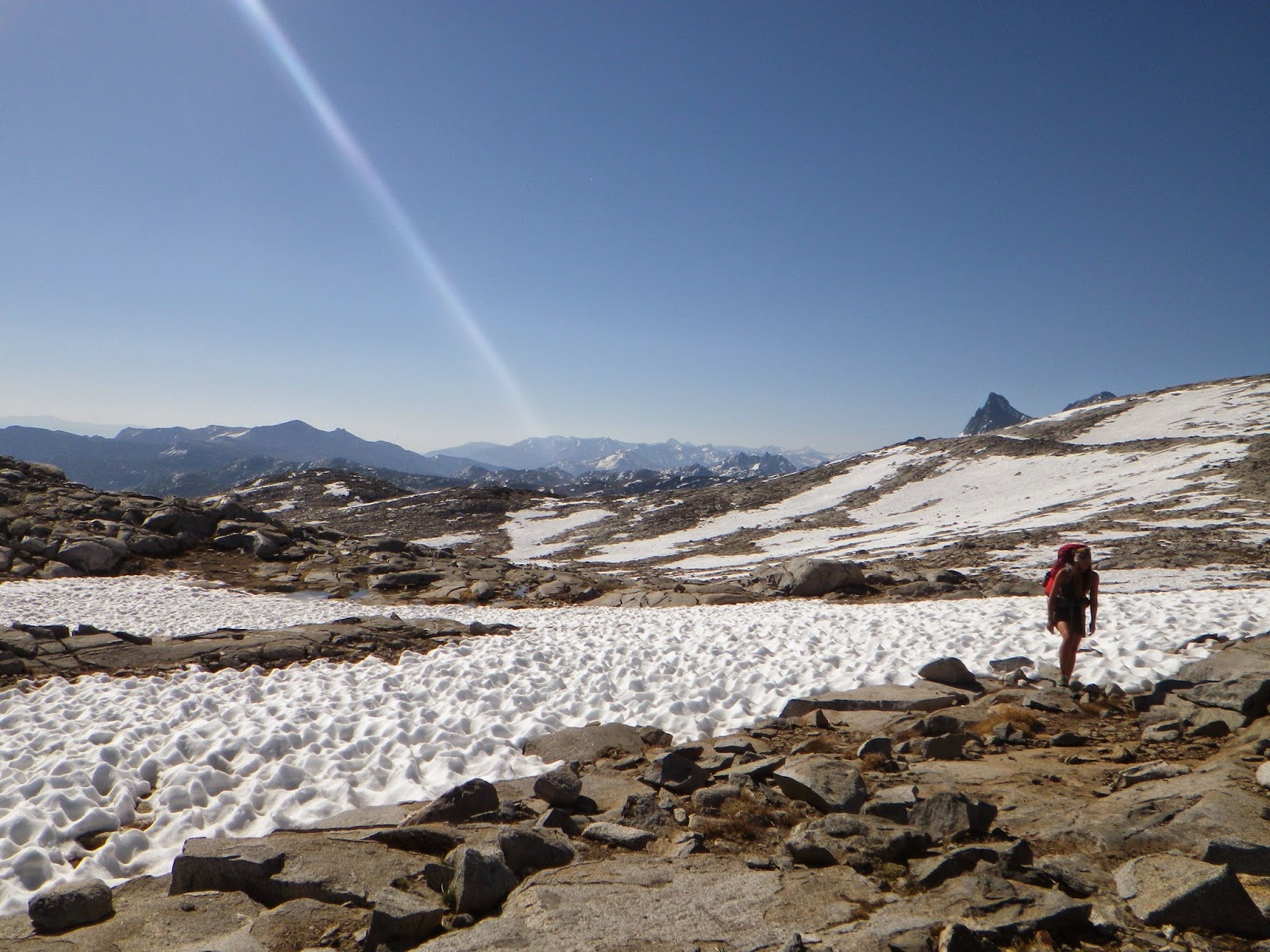 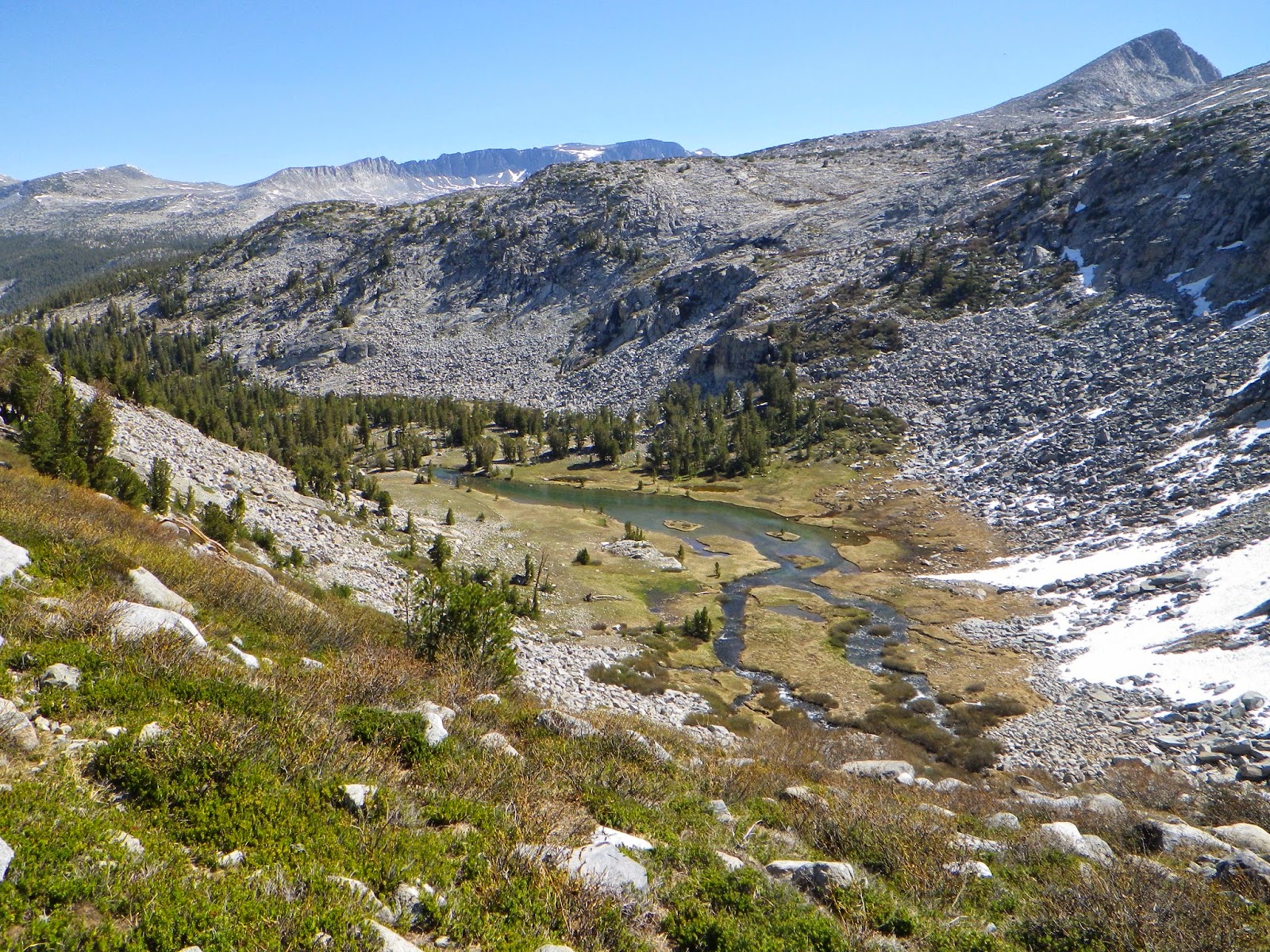 Down and down we went. "I can't believe we climbed up all this!" We thought. The downhill was fairly easy although hard on your joints. We re-crossed the streams but the water levels had gone down, they are lower in the morning, and the snow was less slushy. The crystal green river flowed peacefully along its course through Tuolumne meadows, swollen with flood to the point where it had no riverbanks to speak of. 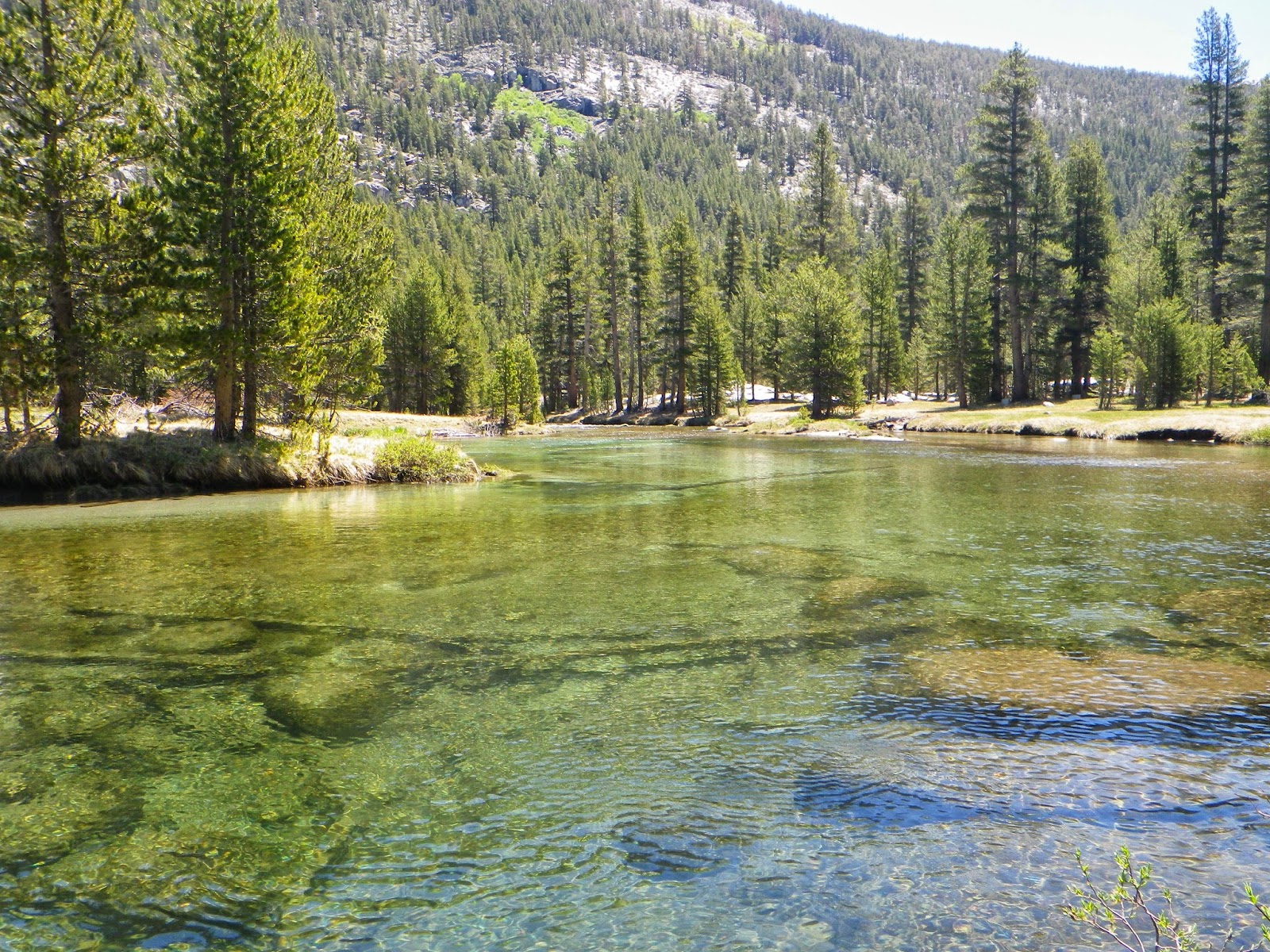 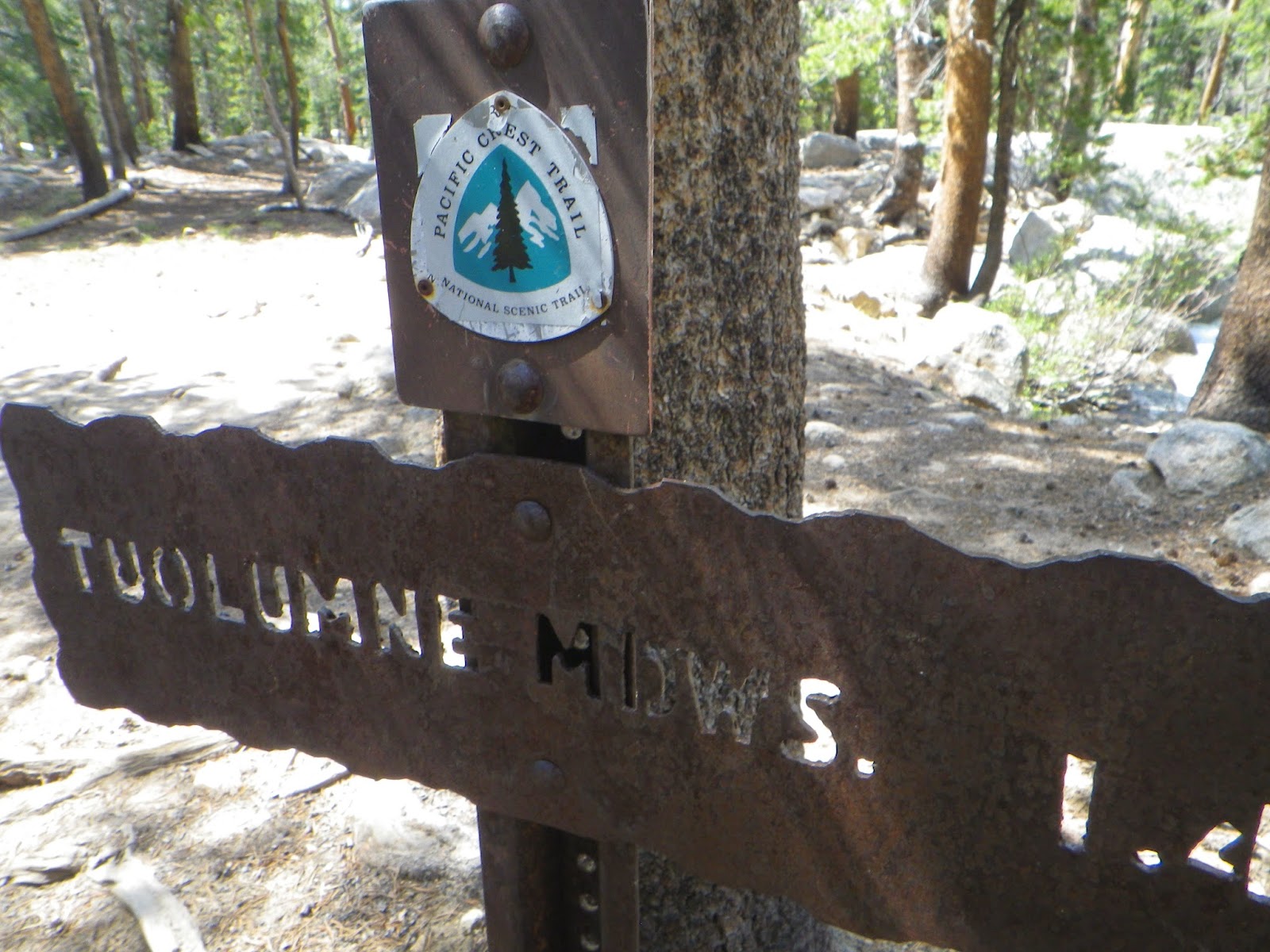 After we got down we decided that even though it was late in the day we wanted to go to Yosemite Valley, so onward westbound we drove. We wandered around the park a little. We were so exhausted we could barely move. So we left before long and drove a familiar highway, highway 140. 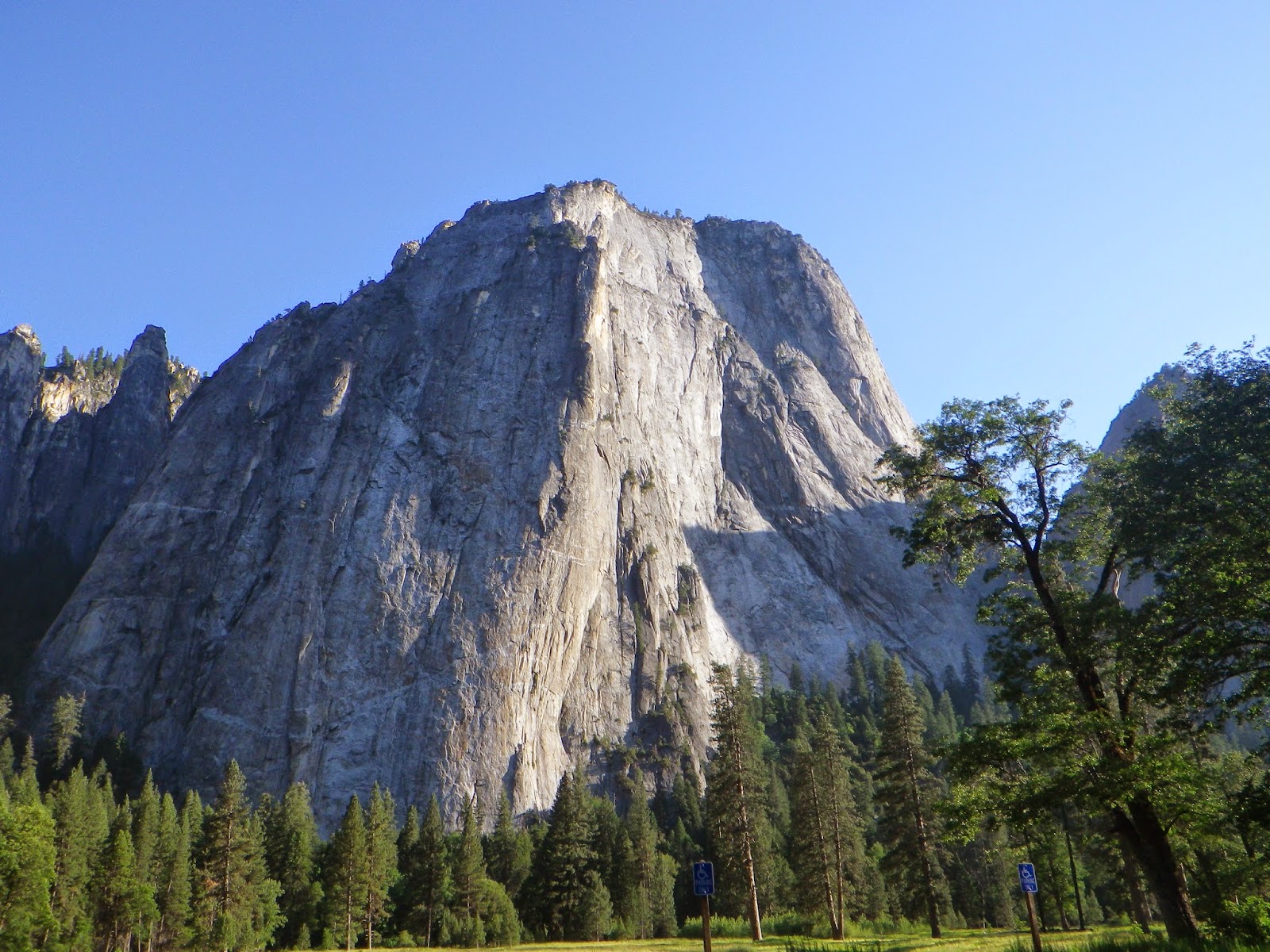 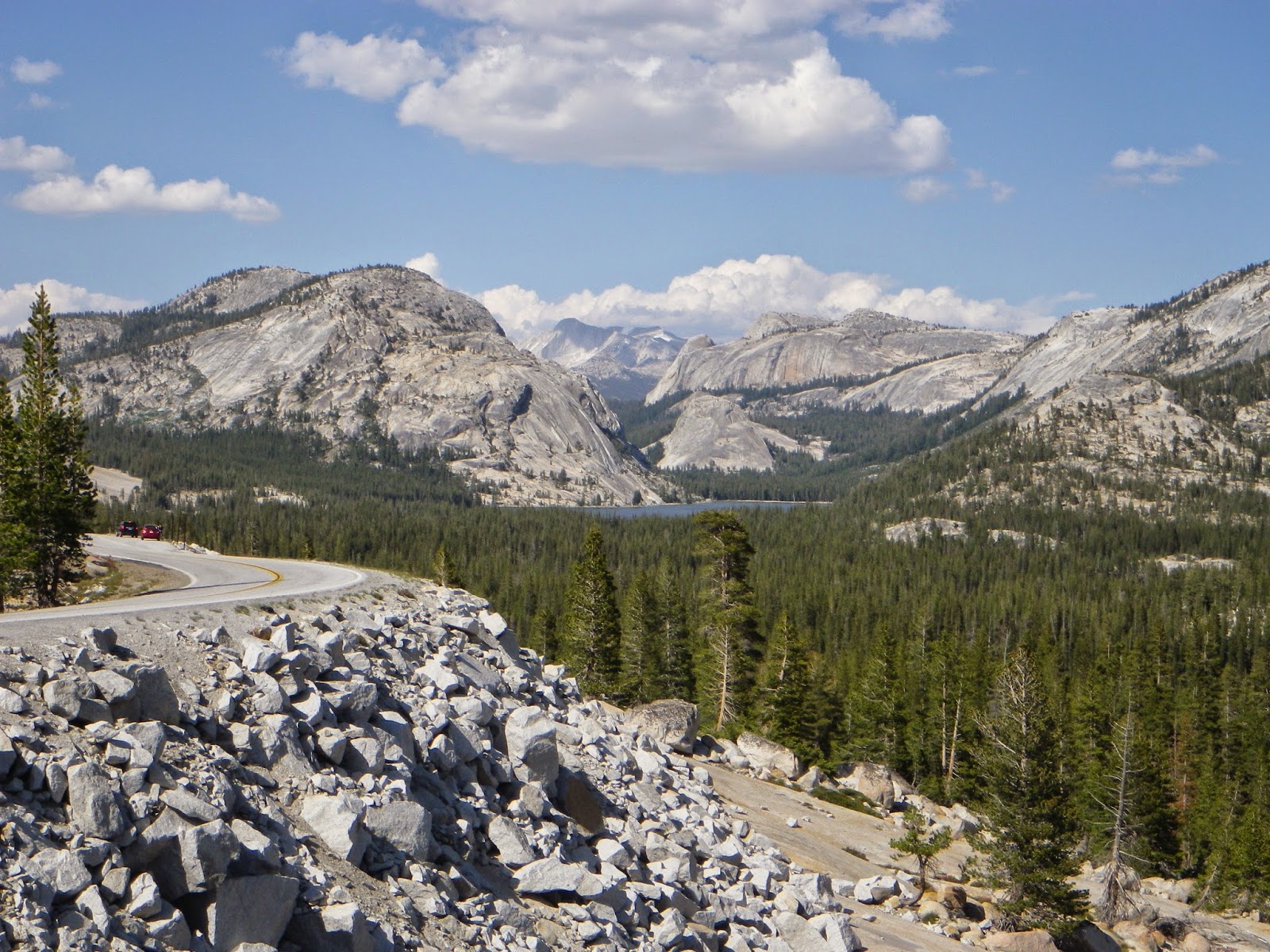 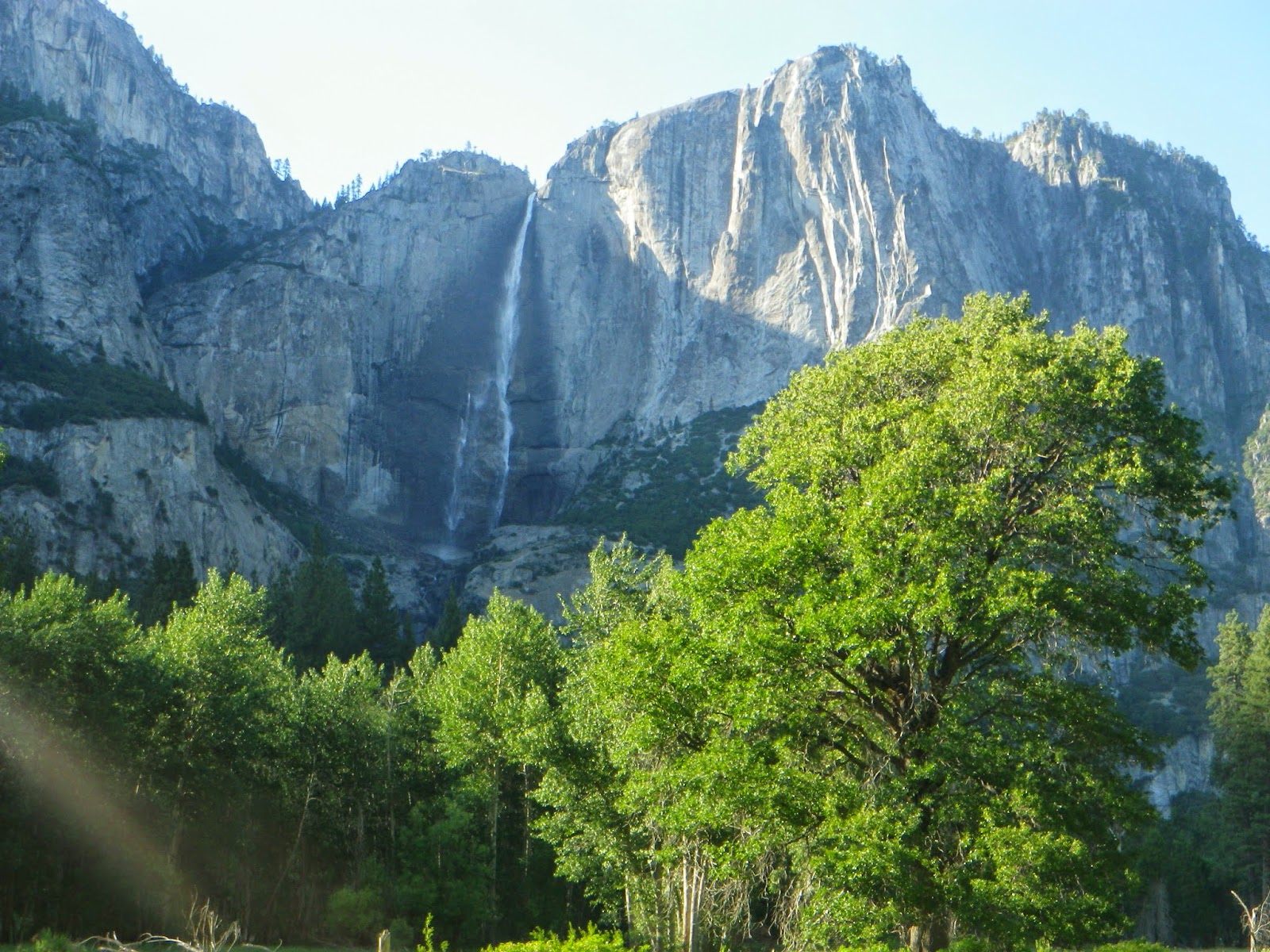 When Maggie first came out to California, it was for a job she took outside Yosemite until she eventually came to work with me in Death Valley. It was a lousy job at a small resort in California Gold Country called Yosemite bug. It's the coolest little place though, all built into the sides of these incredibly steep hills in the woods like some fairy kingdom. She wasn't having a good time there though and quit after a month, kind of with the feeling she'd never see the place again...

So I took her there and bought her dinner! It was so cool for her to be there again, somewhere she lived for such a fleeting time. I had also been there once before and it's always fun to revisit places. It was like 110 degrees there. We had steak with roasted tomato almond butter and mashed potatoes and zucchini sauteed spinach and salmon with a divine spicy peanut sauce and rice and we split everything to have surf and turf. We also got salads and ridiculously good chocolate cream pie and free tea and fresh squeezed lemonade and free showers! We felt so refresh we decided, let's drive!

We hit the road and drove for 3 hours to get to Monterey. Got out of the heat. Coastal highway 1. I didn't quite know how I was going to camp, it turned out to be harder than I anticipated.

I was looking for a dirt road of some kind, using my GPS for help. Something switch backing up a mountain or going out to a beach. I found a lot of no trespassing and day use only signs, as well as expensive houses, fog and ferns and dark red woods. We found ourselves in Carmel Highlands, this nightmarish little mansion town built into the mountain. We got lost on these narrow switch backing roads that are pretending they're in Italy through opulent neighborhood at 1 in the morning.

We had a little break down, unable to find a decent spot and finally by 2 a.m., we pulled into a pull out on the side of the highway. It was a crappy spot but it did the trick, the light Pacific rain moving in on us. We started the day at 11,200 feet above sea level and ended it at 40 feet above sea level on an ocean cliff.
Posted by Unknown at 11:55 AM