Well today was a fiasco.

We hiked 10 miles south from Stehekin yesterday after relaxing there, to camp by a beautiful raging stream. I had find fire going instantly, the North Cascades are hospitable for life in many ways; fire starts easy yet water is plentiful. They have LOTS of mosquitos though. 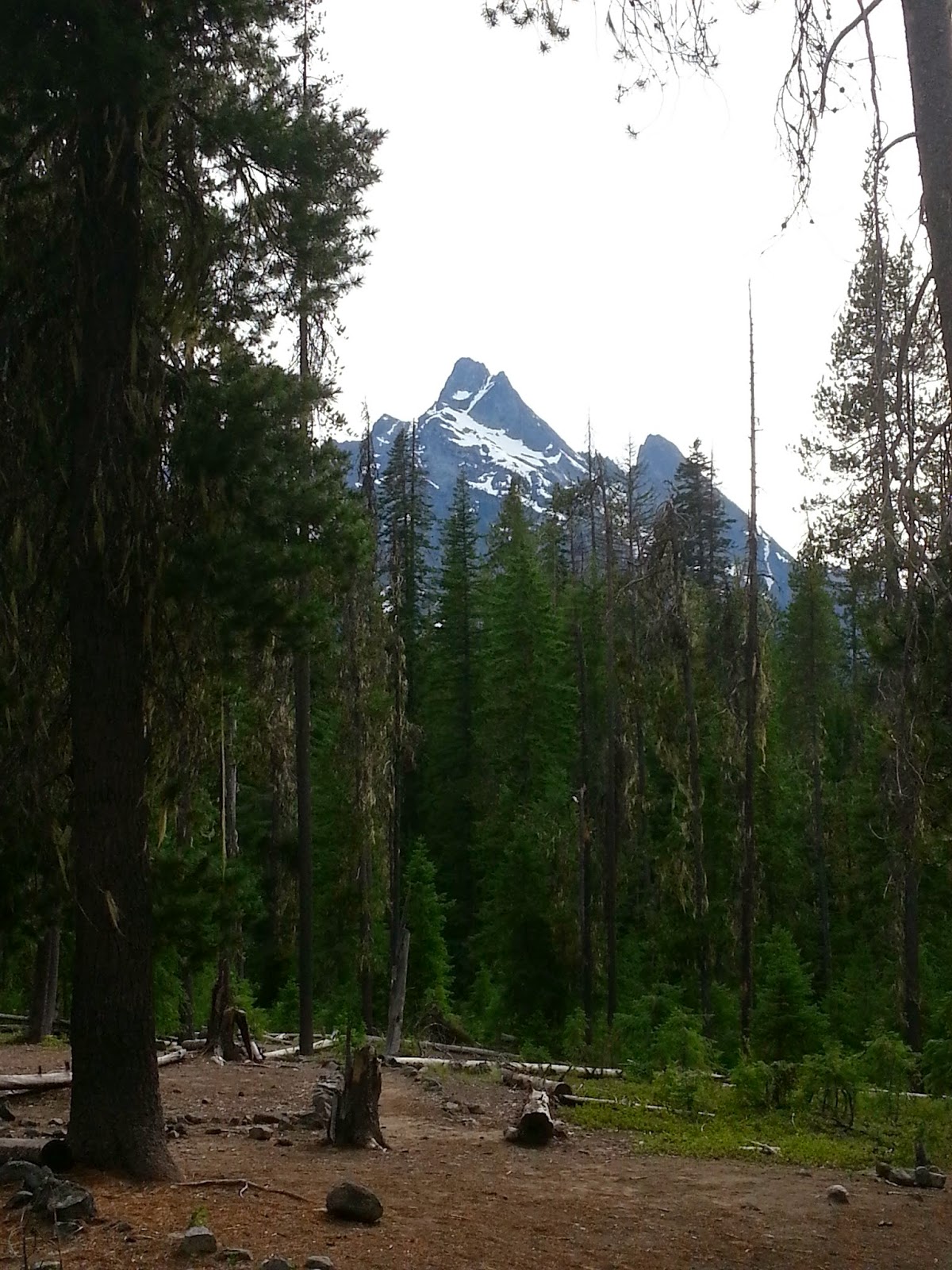 Today we hiked for over for over 8 hours yet were only able to cover five miles, but we hiked many more than that. Yesterday we averaged 4 miles per hour at one point and today it was 5 miles in 8 hours. After cedar camp, where I grabbed a beautiful cedar walking stick, the trail climbed up to crest Suiattle pass. It was the north face, we were prepared for snow. This area is famous for its snow, Mt Baker holds the world record for snowfall accumulation, but from my research the PCT is supposed to be passible by late June and snow free by mid July. Today was the fourth.

So we climbed happily up. We faced one obstacle after the next as usual. Huge, smooth 50 foot tall Douglas fir trees lay fallen across the switch backing trail. Creeks roared down the hill side which we crossed with ease. We bathed under a waterfall. We came to a destroyed bridge and crossed the river over a log. All of a sudden we hit the snow field and the difficult obstacles. 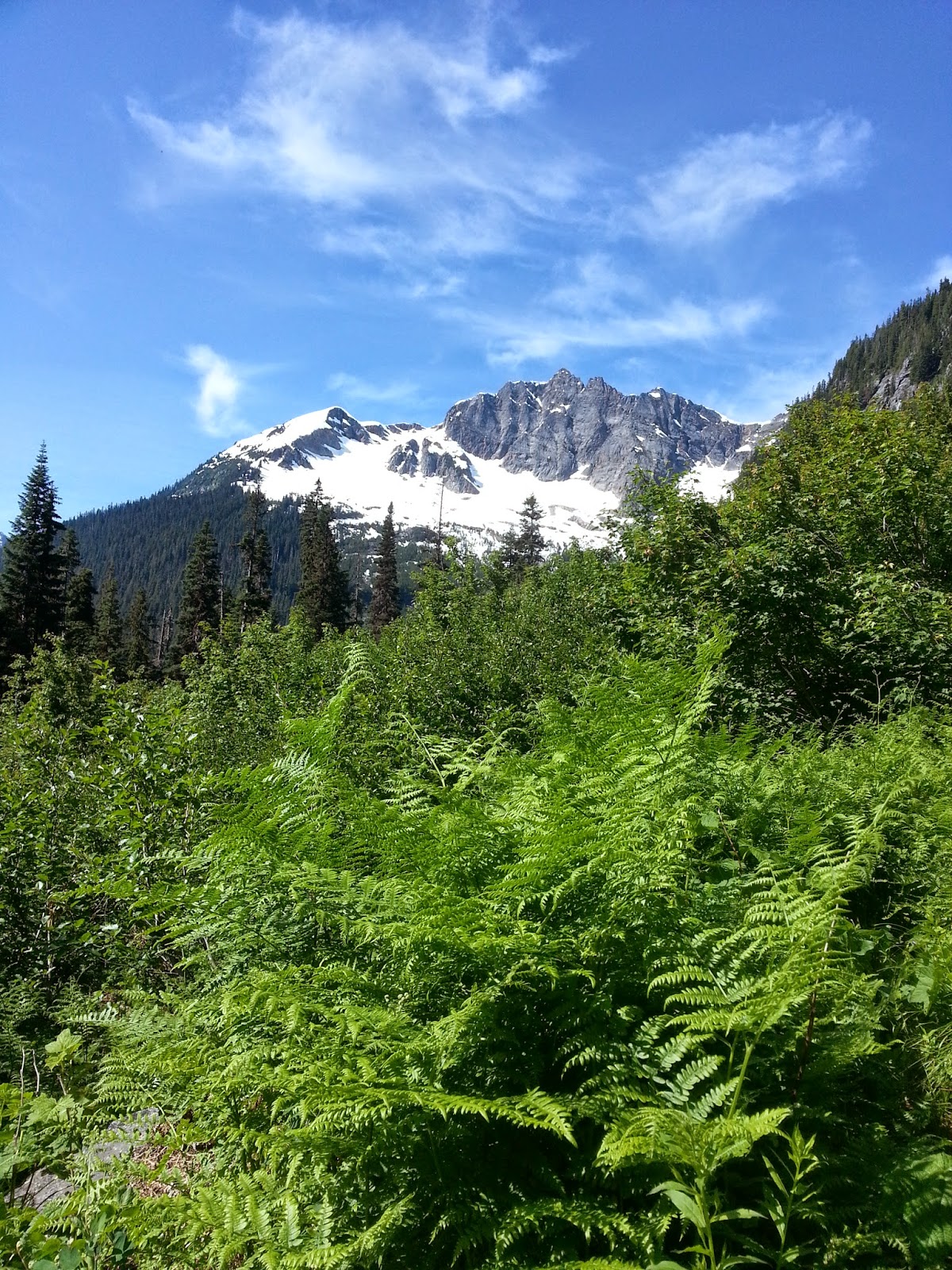 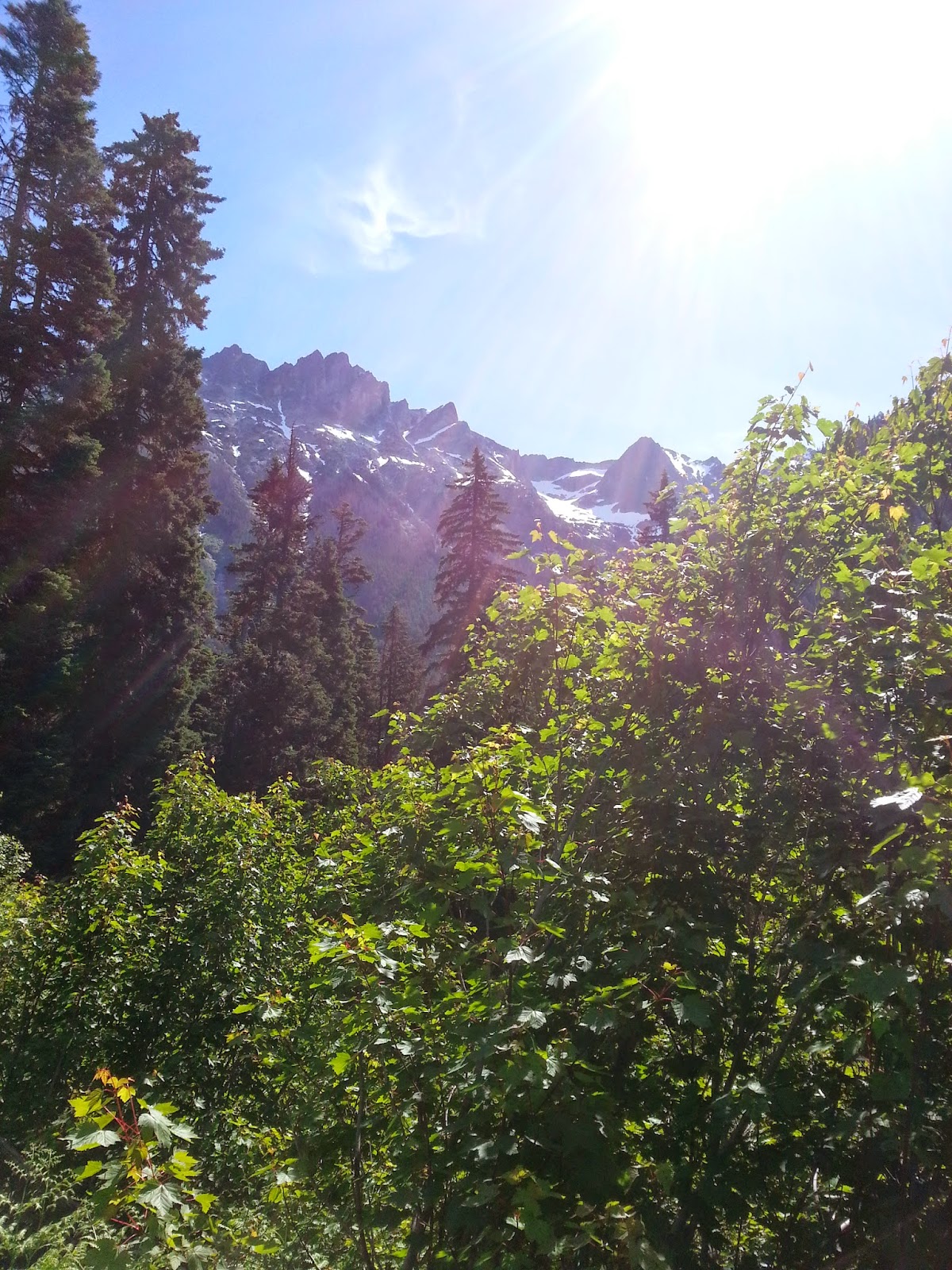 An avalanche had completely demolished the trail, and wreaked havoc on the land. Dozens, if not hundreds, even thousands, of trees were collapsed across our path! One by one we crossed them, over some and under some with our fully loaded packs. We lost the trail for a bit while we crossed snow that was textured completely with pine boughs. Then we found a small piece of uncovered trail and a bridge that was torn to bits and half under snow, but we're still able to cross the stream over it.

After that the trail was gone. To our left we saw complete chaos, a jumble of trees and branches, completely unpassable. To our right we saw what looked like where the trail hopefully ran, through some stands of less destroyed but sickly looking pines. Behind that was the slope of the huge snow field that curved up the mountain to end abruptly at rock cliffs where 6 waterfalls cascade down, one huge one, some free falling off overhangs, one hitting a smooth boulder and breaking into dozens of little waterfalls, all pouring down to be covered by the melting snow field. They began high above where other snowfields cling to the cracks of the top rocks of the mountains, which terminates far above us in jagged, black grey points. 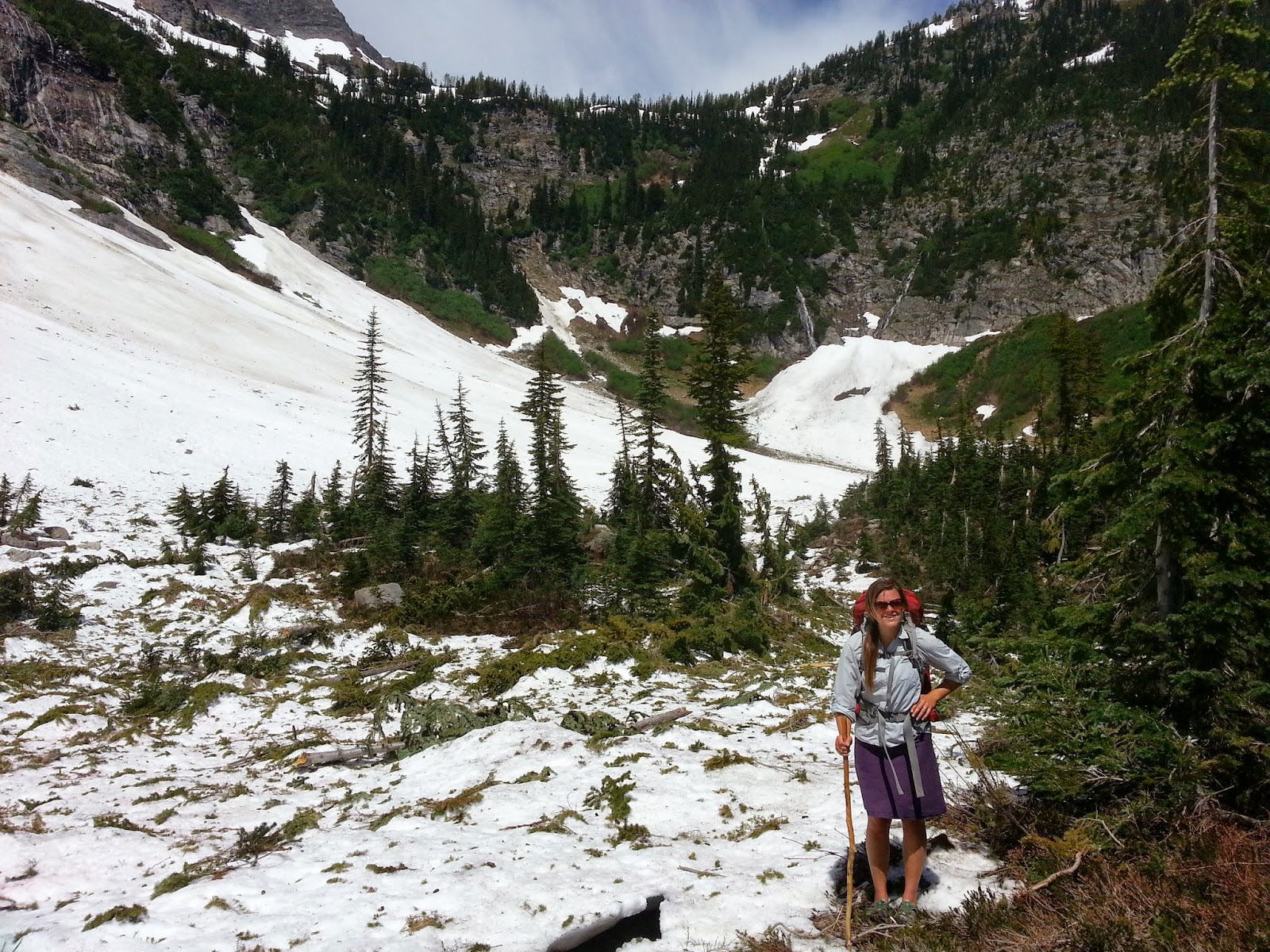 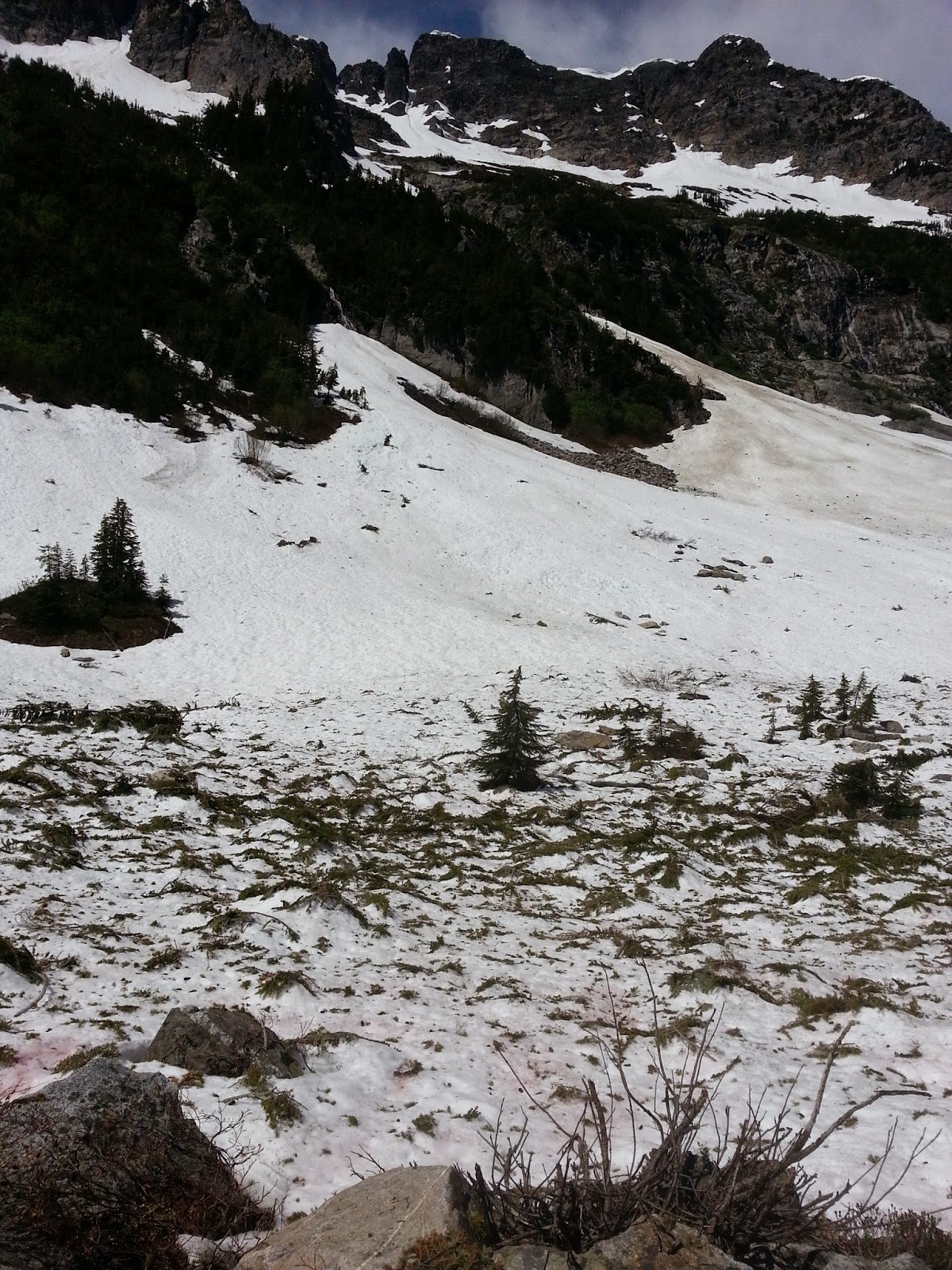 I had been to places like this before in Glacier, Colorado, and Wyoming and thought I was ready for the challenge. We took off through the stand of trees and soon we were surely off the trail. I believed we were above it and so we tried to head downwards across the snow and through the bushes. We crossed numerous streams and encounters snow bridges over the streams. At some point I climbed on a rock to look around and try to find some semblance of a trail. There was nothing, just snow and bushes and streams and rocks and destroyed pine trees everywhere, sweeping views in all directions, but in the foreground utter chaos. We were bushwhacking now, and then Maggie fell through an ice bridge to her waist and got wet and cried. It was scary.

I thought we were paralleling the trail only it was below us so I left my bag and scouted down the cascading streams in vain attempts to find it. Upon my failure we doubled back to the busted foot bridge. Then we set off down hill through the Avalanche to a large area of tall standing spruces and didn't find the trail there either. After doubling back to the bridge once more we went above it all and found an uncovered bit of trail high up on the snow field. It was dry and we warmed are numb feet on it. Then we pressed onward.

We crossed huge snow fields and tried with all our might to stay with the trail. We crossed thick snow bridges with water we could hear flowing beneath us. But we tried not to do that. I stuck my stick into the snow and it finally snapped in half. I had a huge bleeding gash on my arm and Maggie's legs were bloody. Then the hill became steep and we still couldn't see the pass but we tried with all our efforts to claw our way up this thing. I fell through the snow three times up past my waist trying to climb around a buried tree. The trail switchbacks steeply but was buried so you had to just climb straight up and it was grueling. Maggie cried some more as the snow began to soften in the afternoon and we kept falling through. We were prepared to climb straight up buried switch backs but it was the constant obstacles of scratchy pine trees that made this so challenging.

So I finally said "Alright if we are gonna skip the North Cascades then we need to at least get to the top of this thing, we are so close now." But we weren't close. There were four mountain passes that were at least this big that contoured Glacier Peak, a supervolcano, in the 8 days between here and Skykomish. That was starting to look like a foolish endeavor. It's been an especially heavy snow year in the North Cascades which really sucks.

At some point where I was almost at the verge of tears myself I realized we were nowhere near the top. A raging creek flowed under a thin layer of snow to my left down the slopes of this wicked mountain. Another creek flowed under the snow to my right. Above me now was a gnarled tangle of branches and pine limbs, pure suffering especially with my pack of 7 days of food. Let's get down. 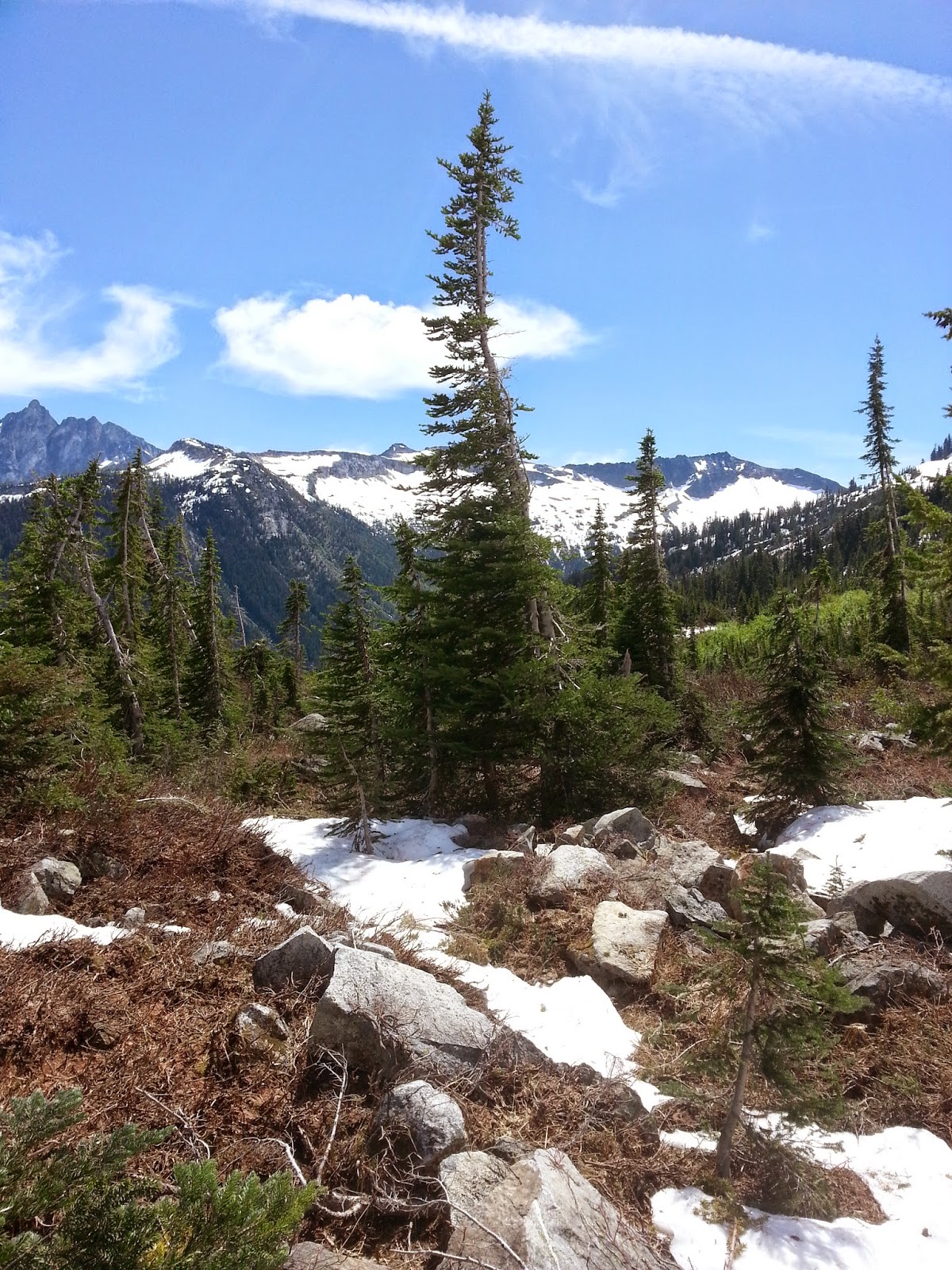 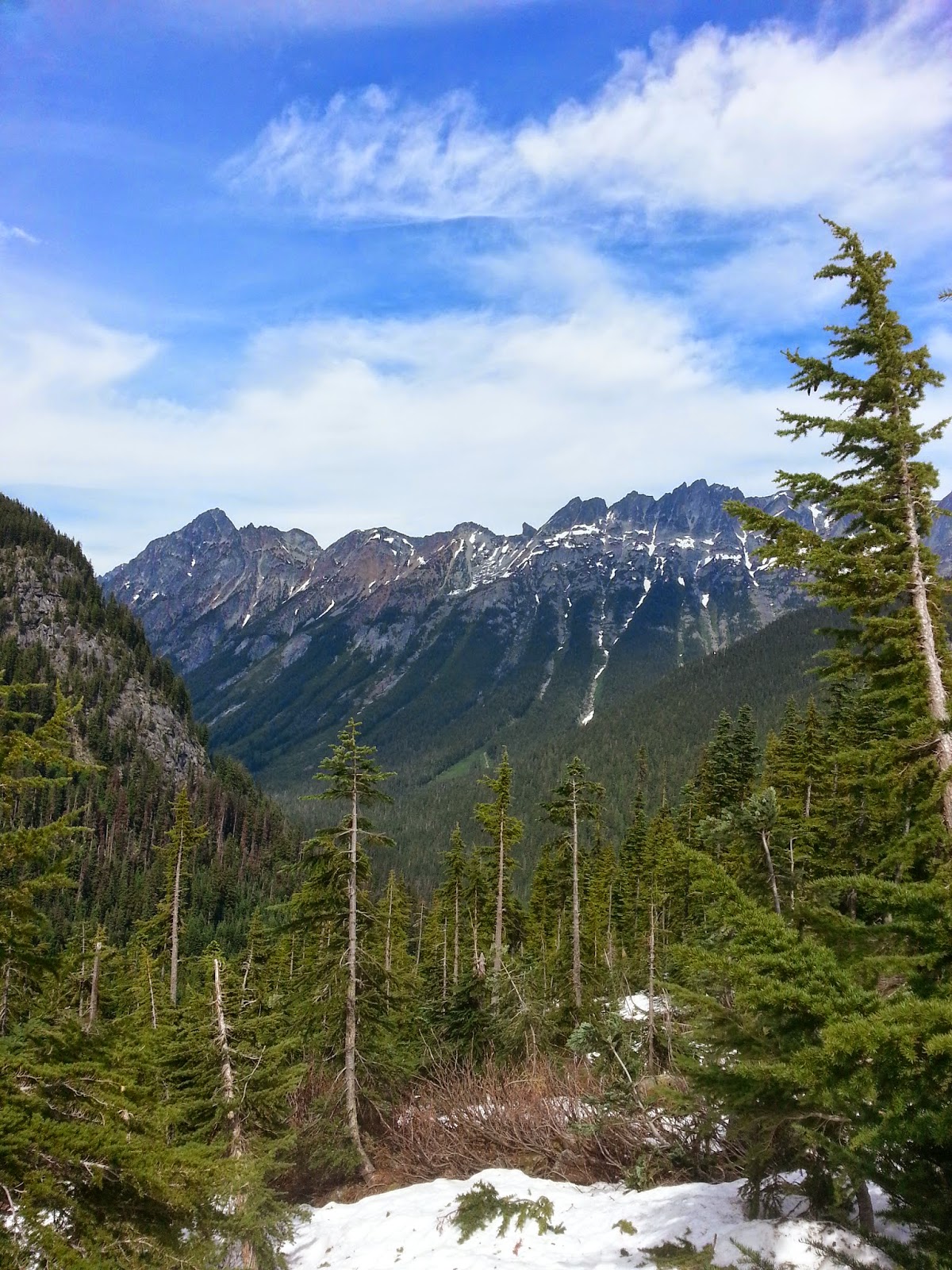 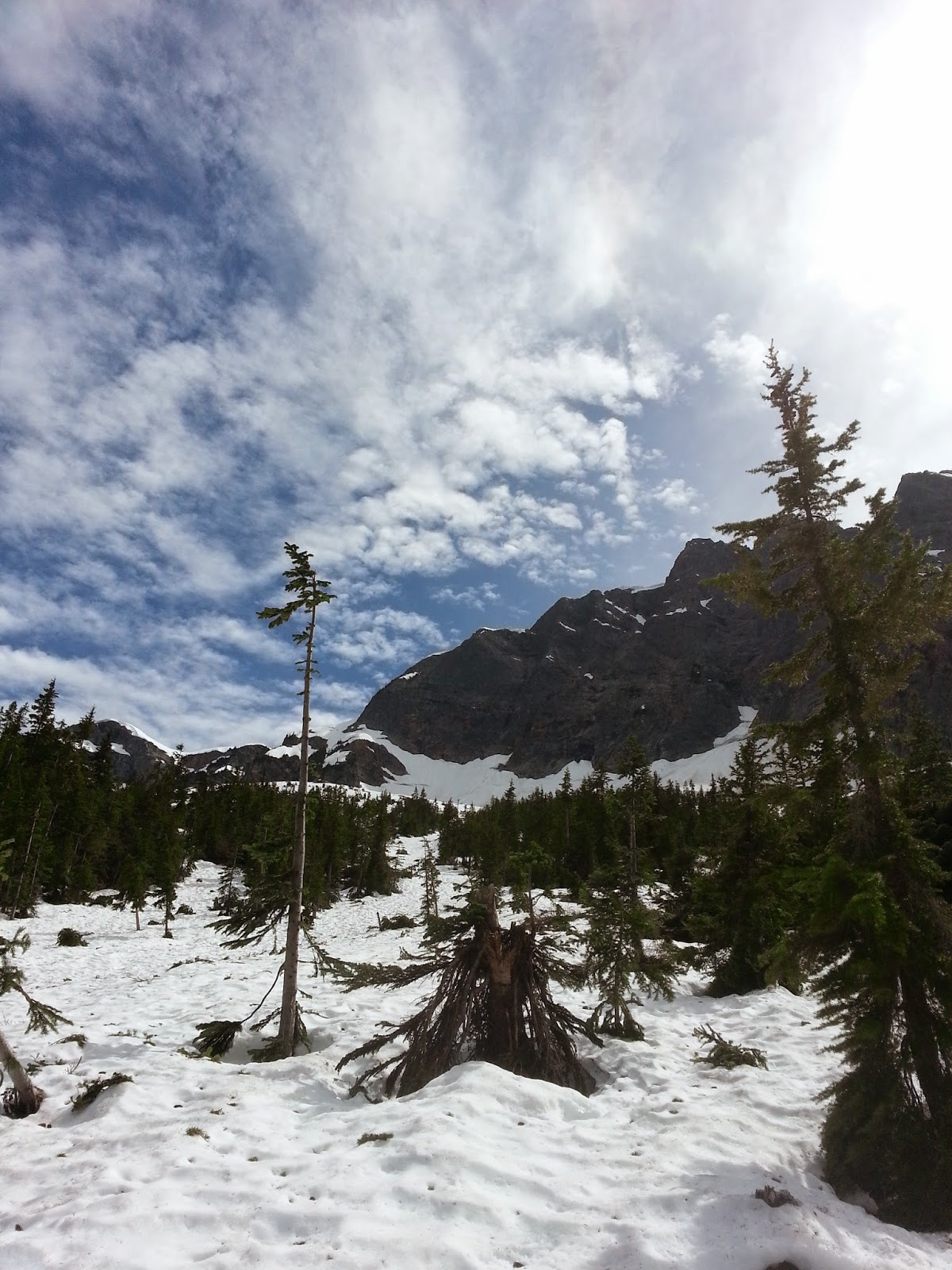 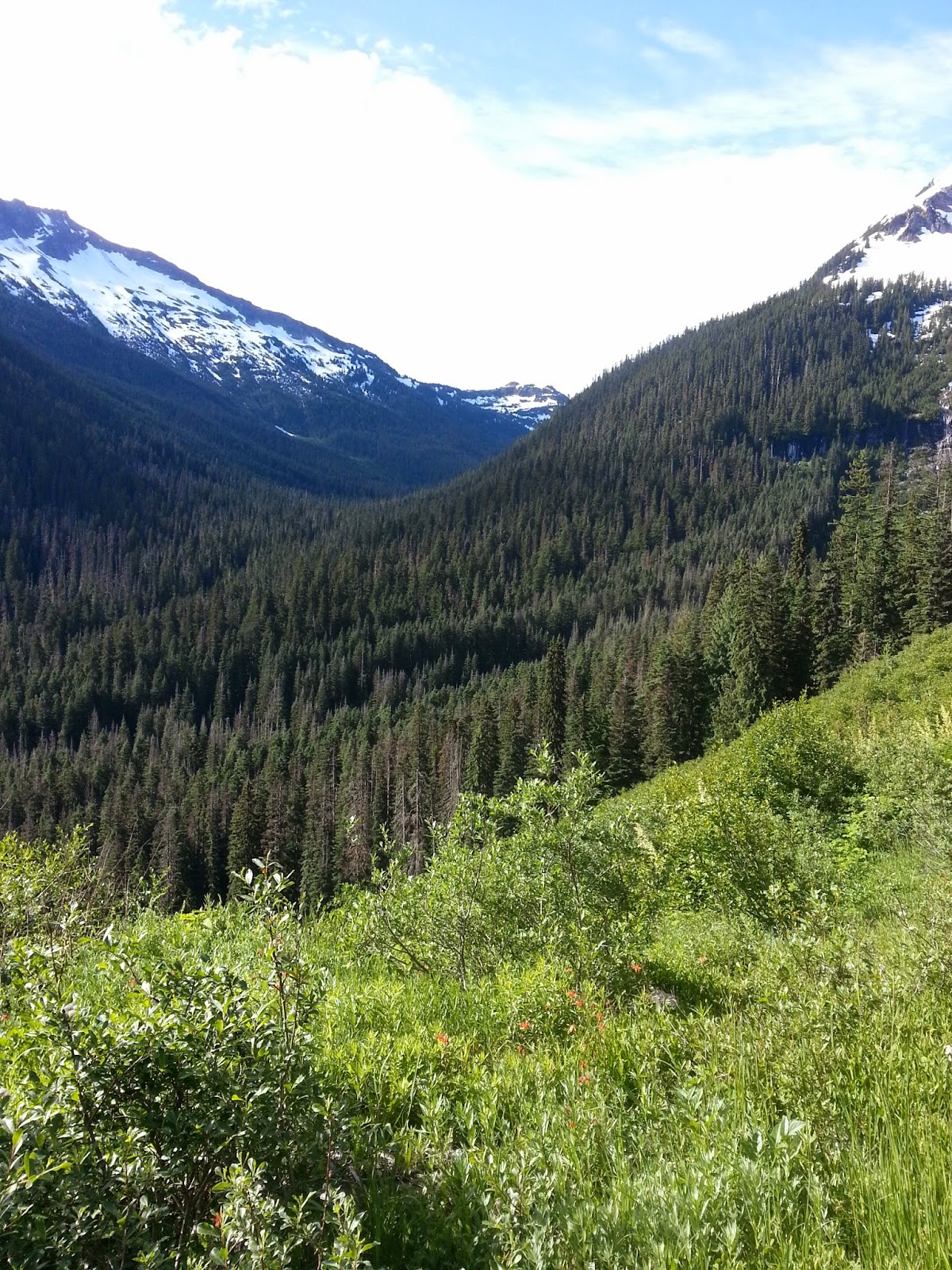 We went down and decided we must skip this segment. Of course this is the most direct way to the hundred miles distant Skykomish, how else will we be getting there? We went down the grueling way we came up and after crossing the bridge again and over the first set of avalanches we were unable to find the trail but found a lonely campsite with a creek and fire pit and just collapsed there.

We are going to have to take a ferry from Stehekin across a 50 mile long three quarter mile wide lake and then walk or hitchhike to Wenatchee where will pick up highway two and make our way to Skykomish. Maybe we'll find a bus but we'll have a really fun time doing it. We met a nice guy who camped with us here, also doing the PCT, who after hearing our story is detouring the North Cascades too. It's a sad start but we're having a great time and will continue undeterred for the rest of Washington after Skykomish next week. 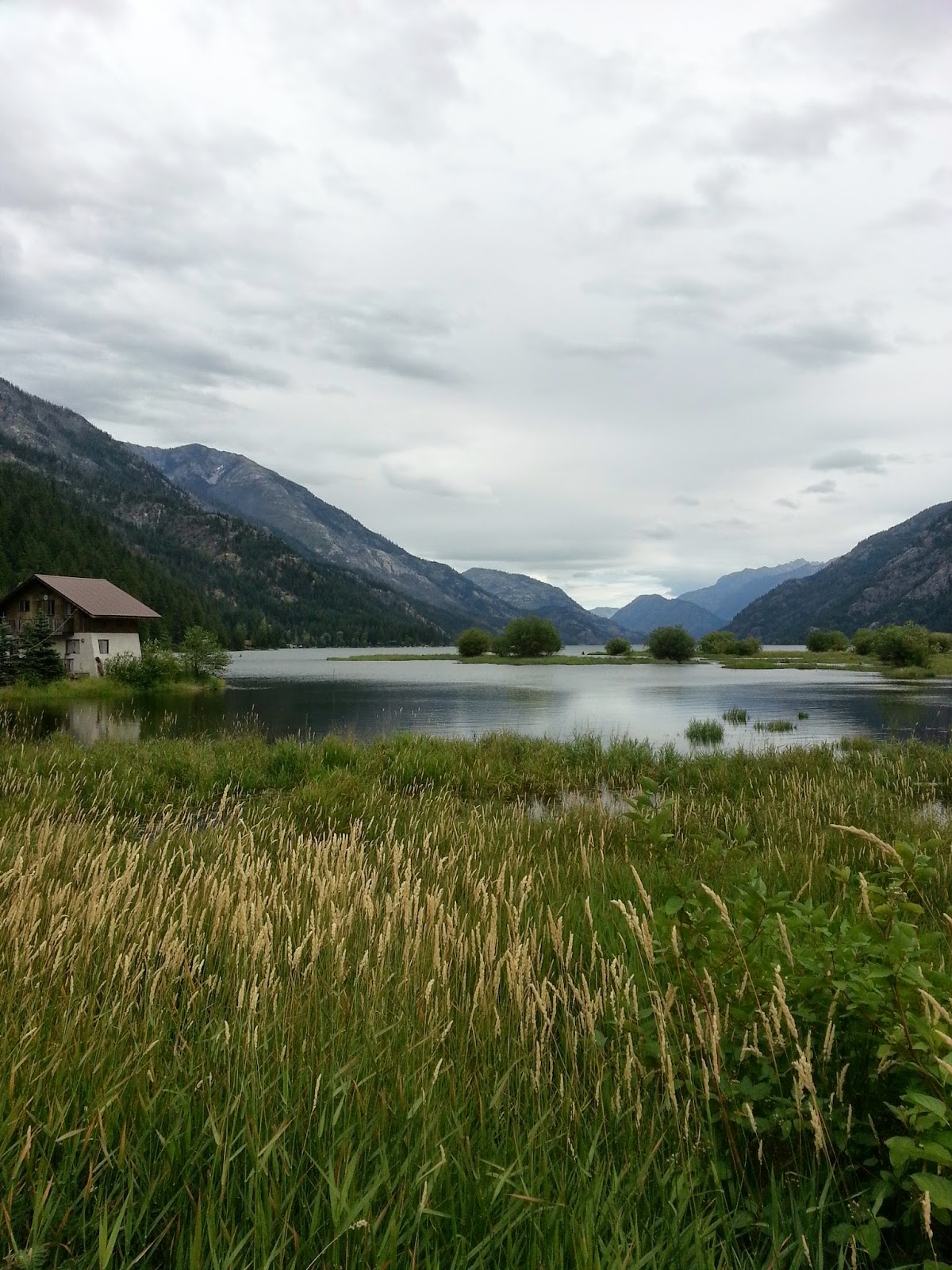 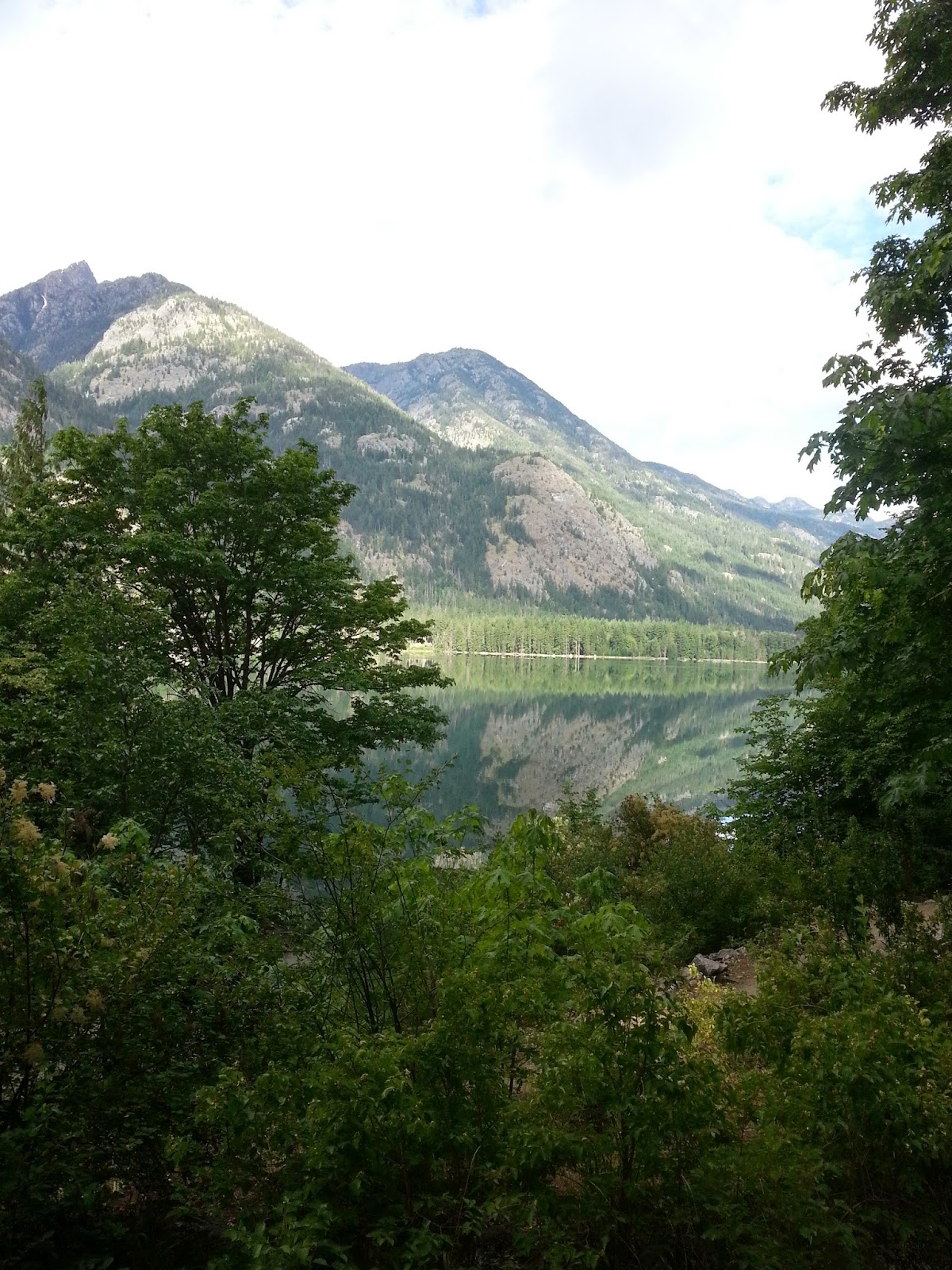 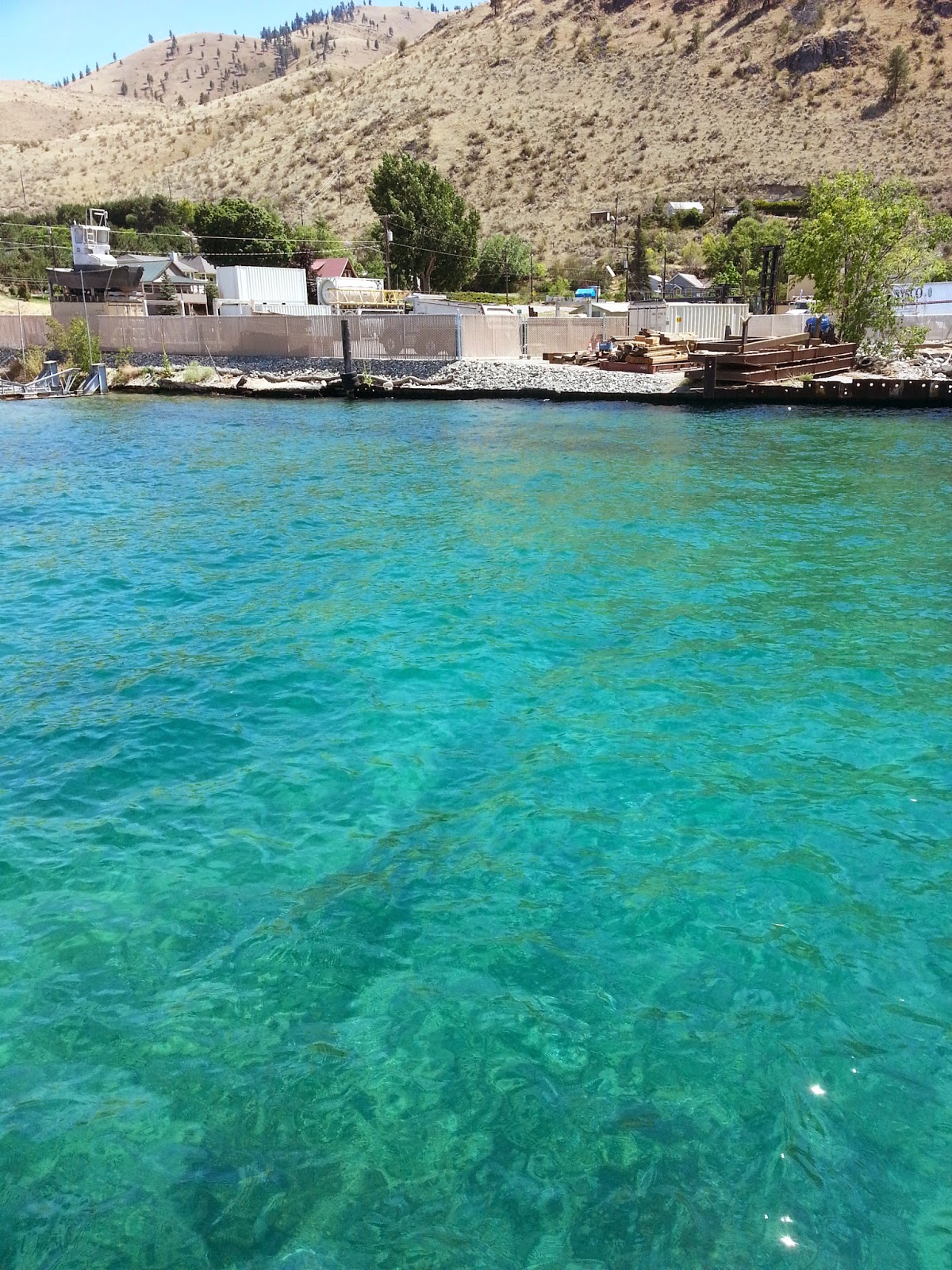