Finally now I'm getting to relax...

We had a hard time in the Santa Cruz area after coming down from the Sierras, it took us about 7 hours of confused driving looking for a free spot to camp. We ended up paying 35 dollars so we could just stop driving. It was a rough day 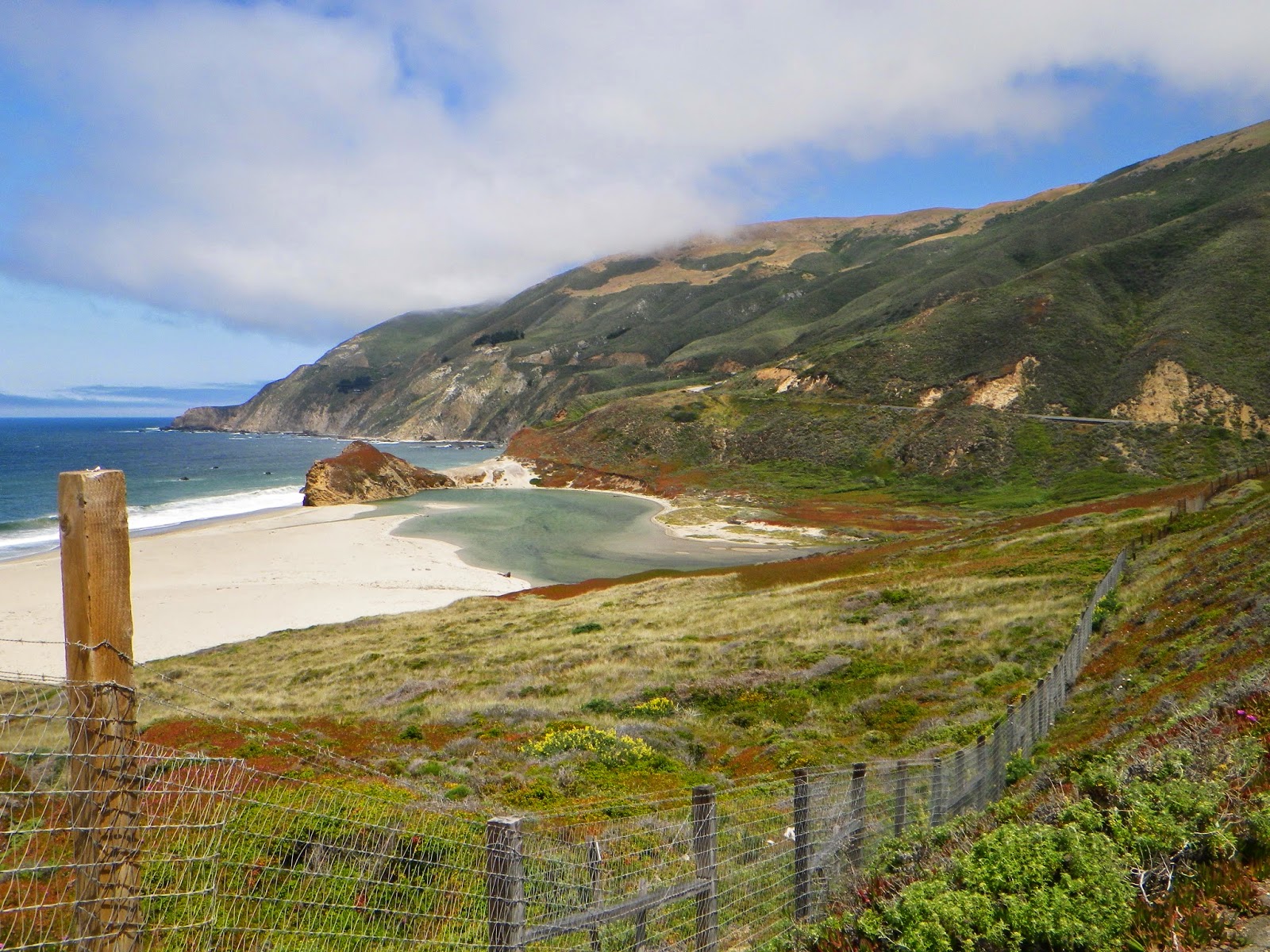 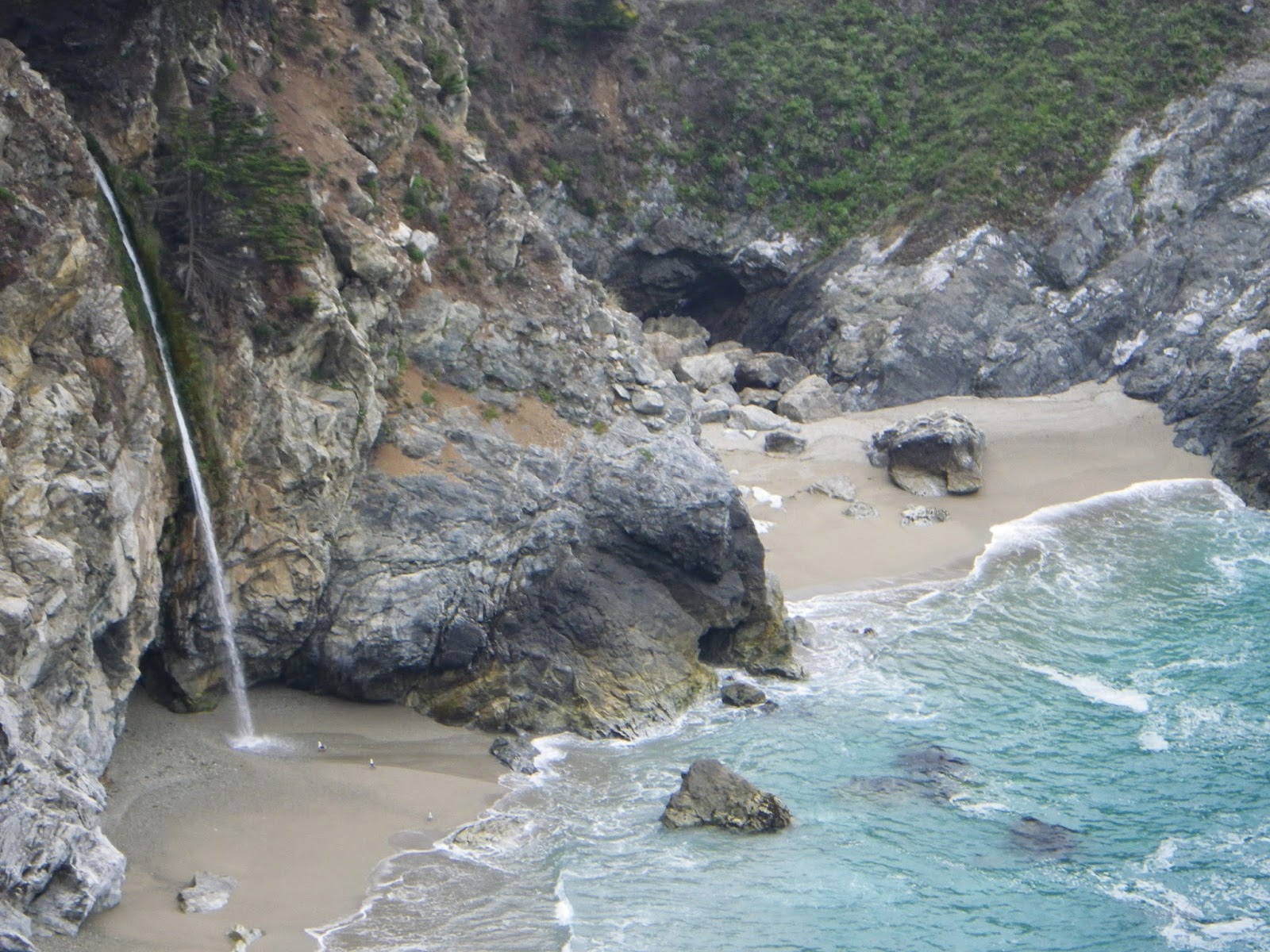 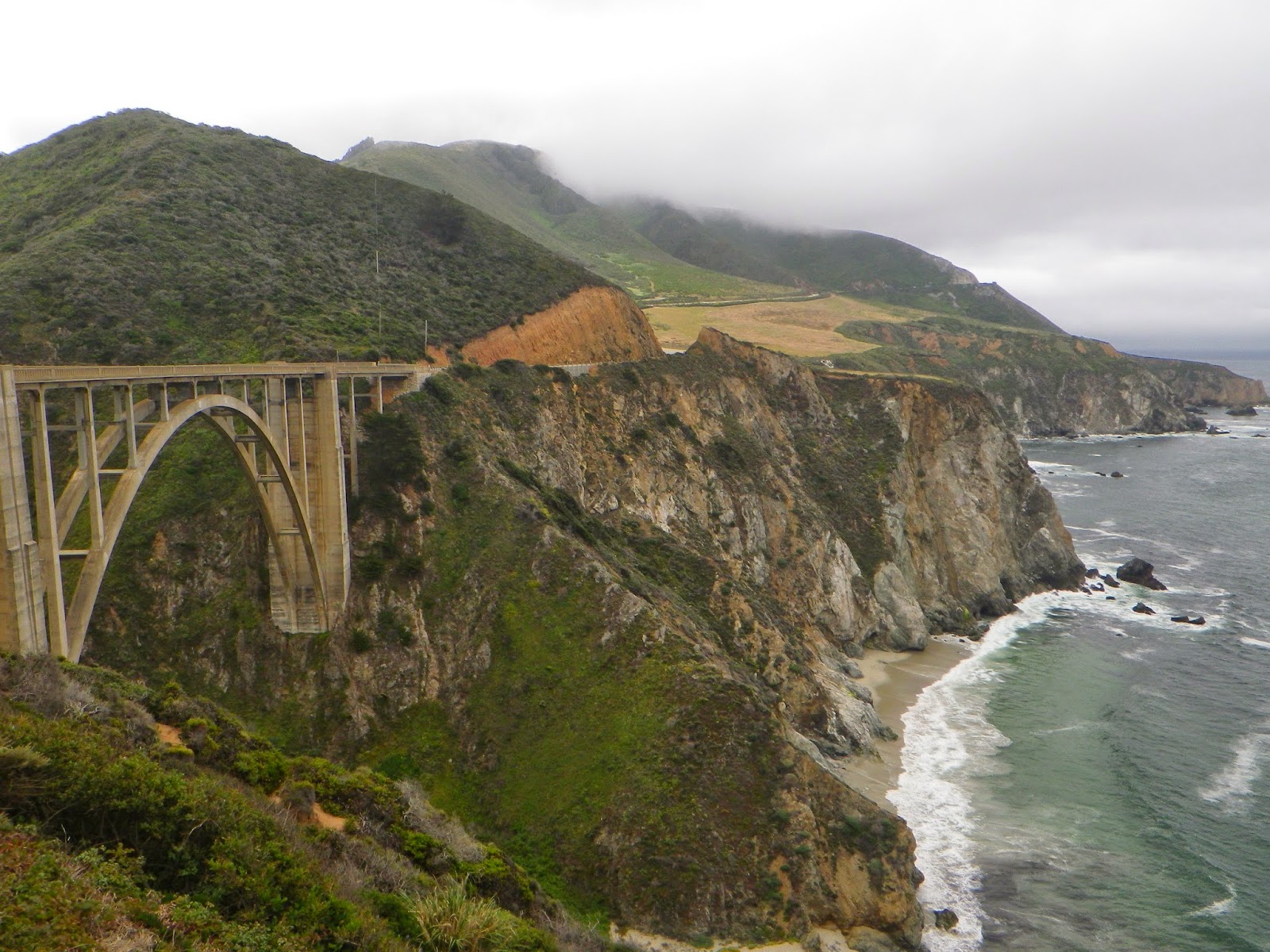 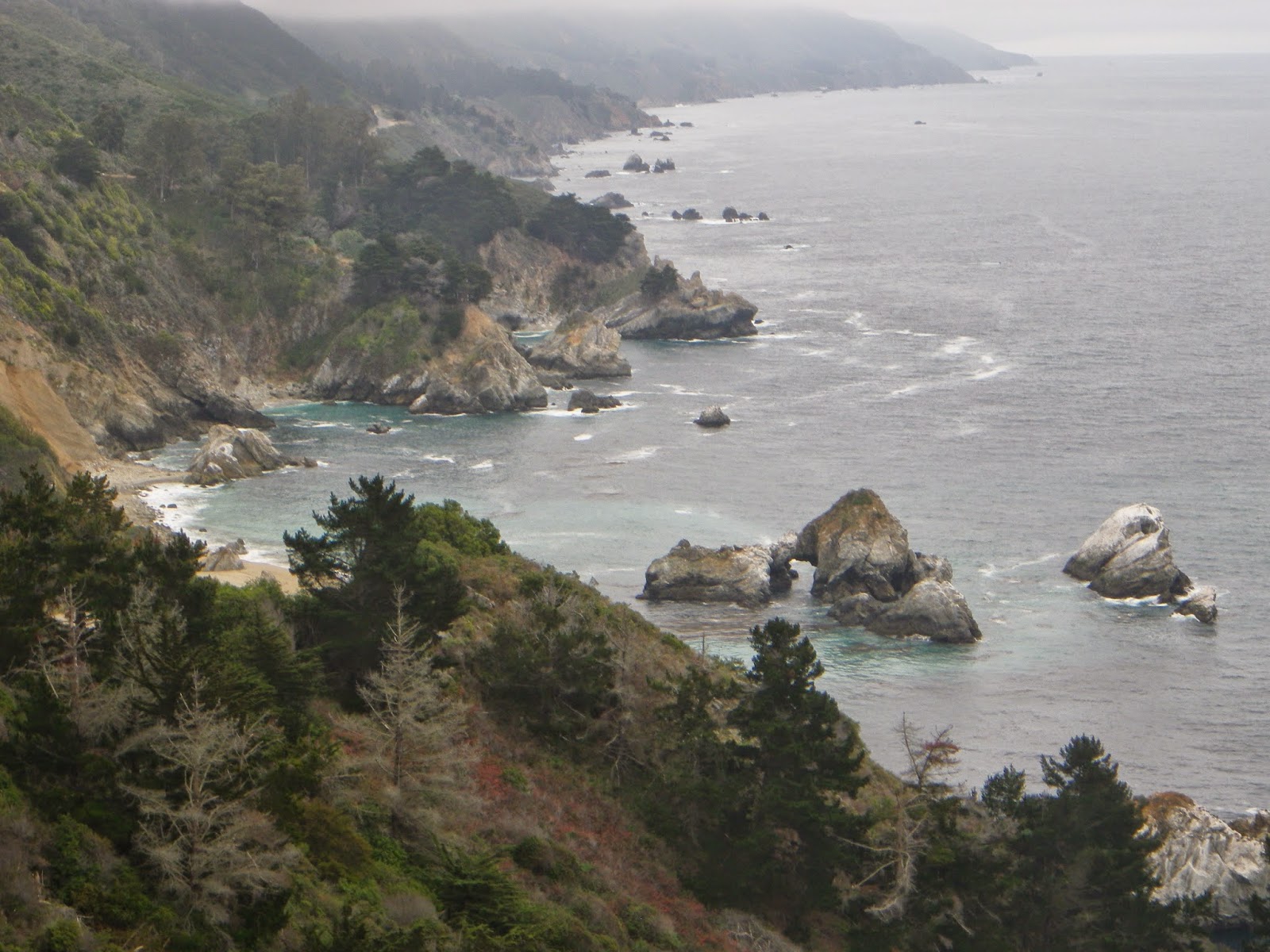 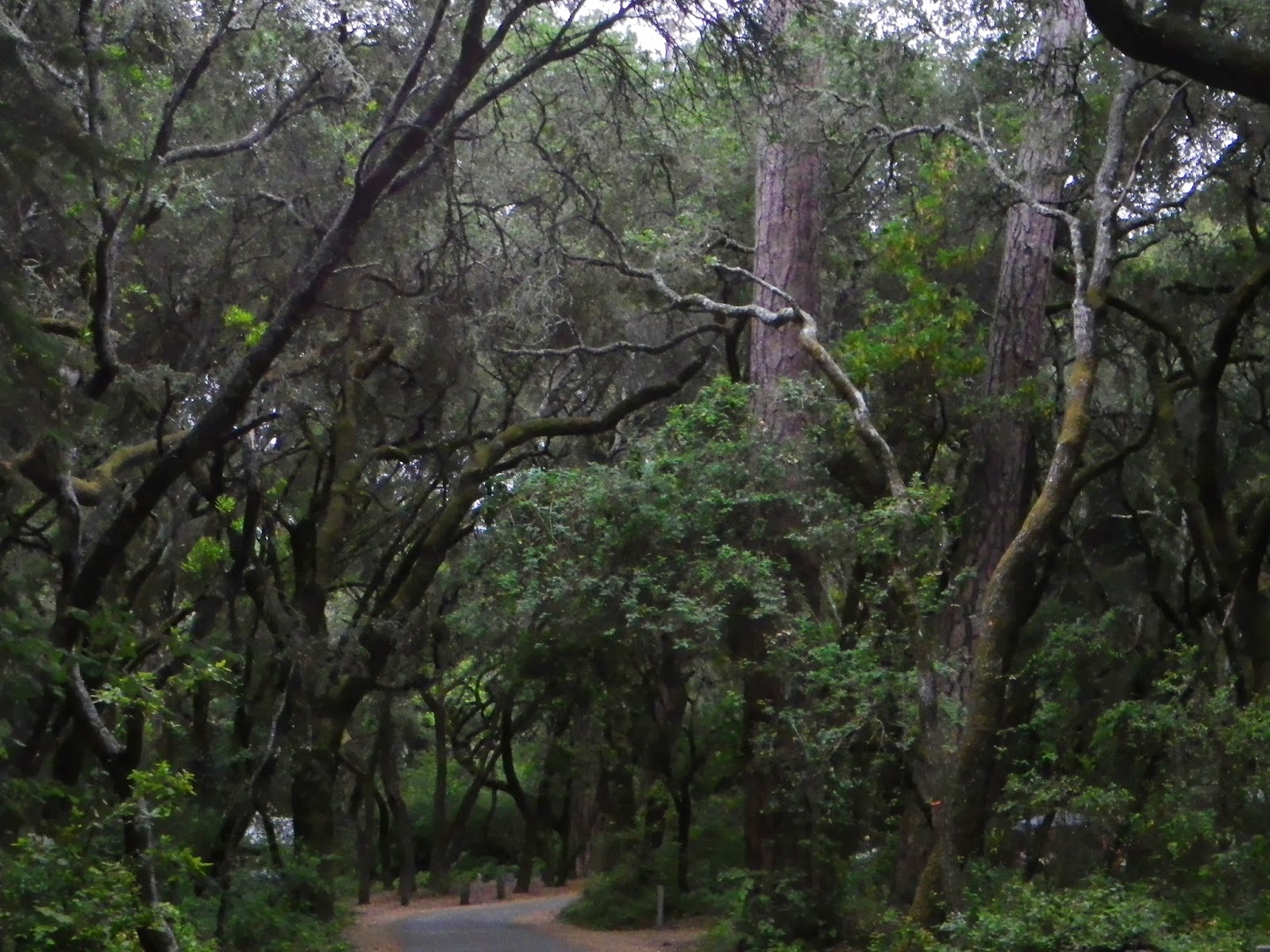 The next day we explored San Francisco and it was alot more enjoyable.  This is what I wrote....

Maggie and I are just sitting peacefully on top of a cliff in Marin County. The ocean is blue and dim turquoise all around us, the cloud cover is thick. The Golden Gate Bridge stands proudly, guarding the San Francisco city skyline behind it. This is our spot for the night, on top of a lonely seaside mountain above the Pacific. I finally found my spot to rest. The air is wet and clammy. 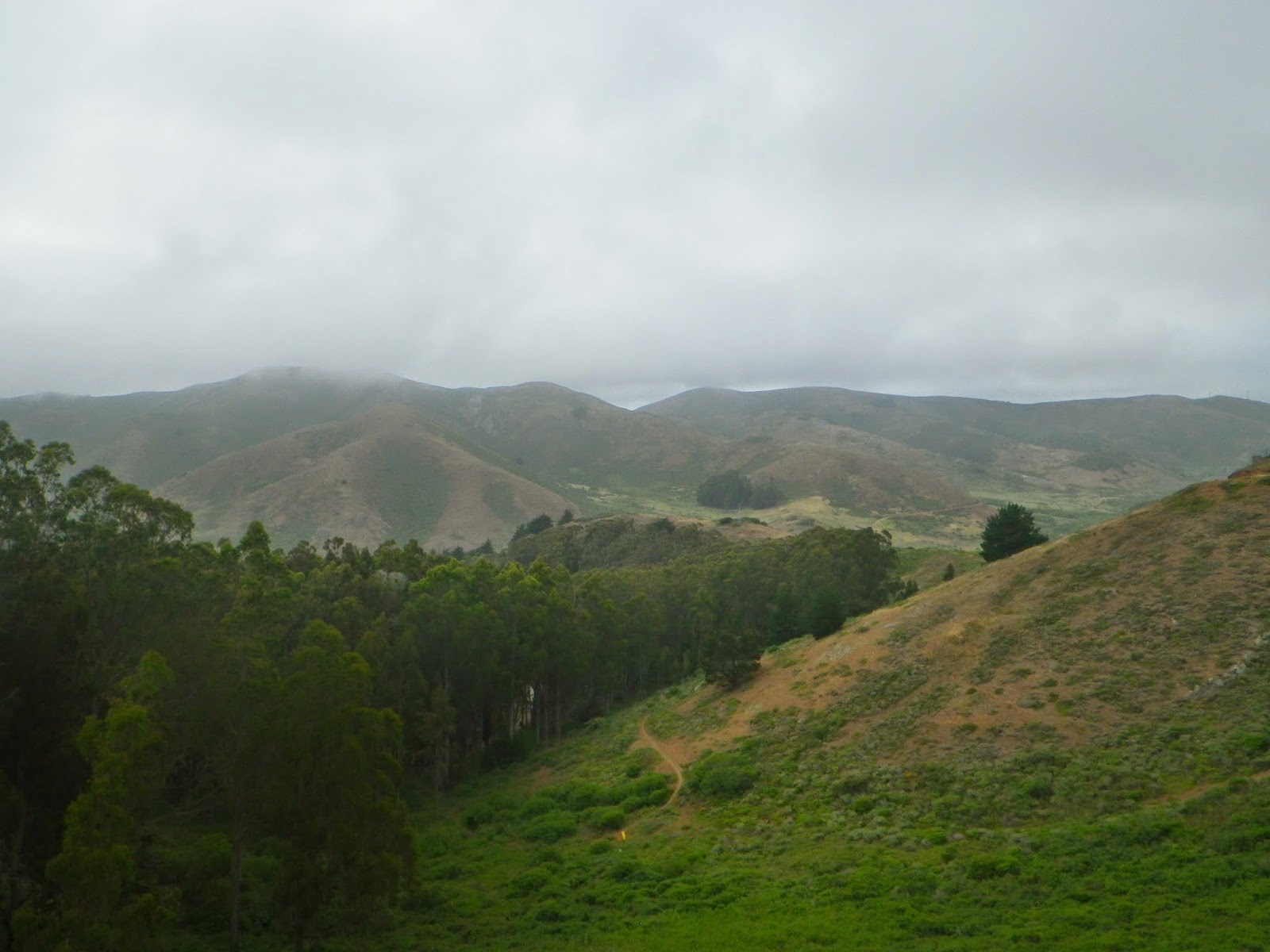 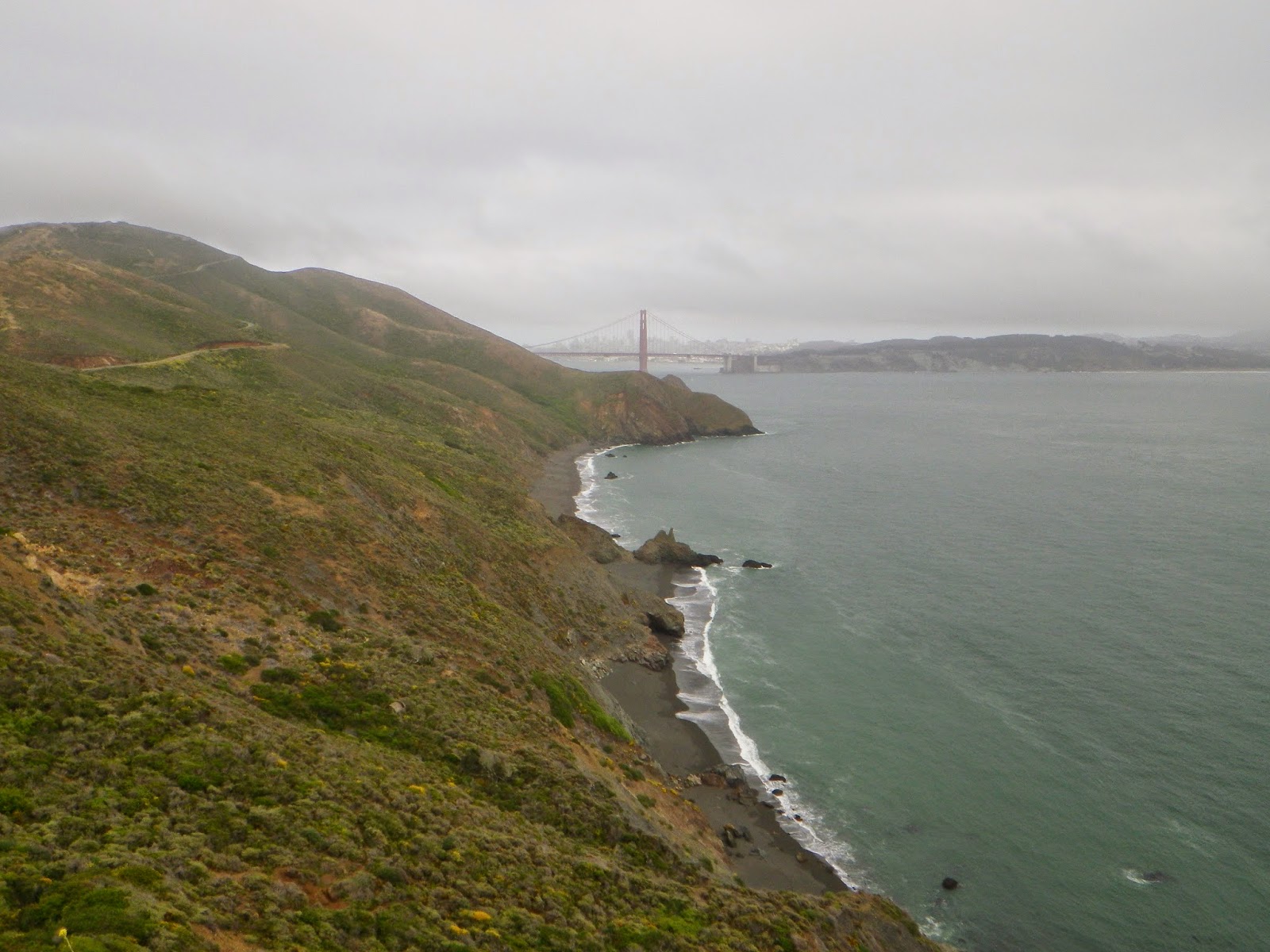 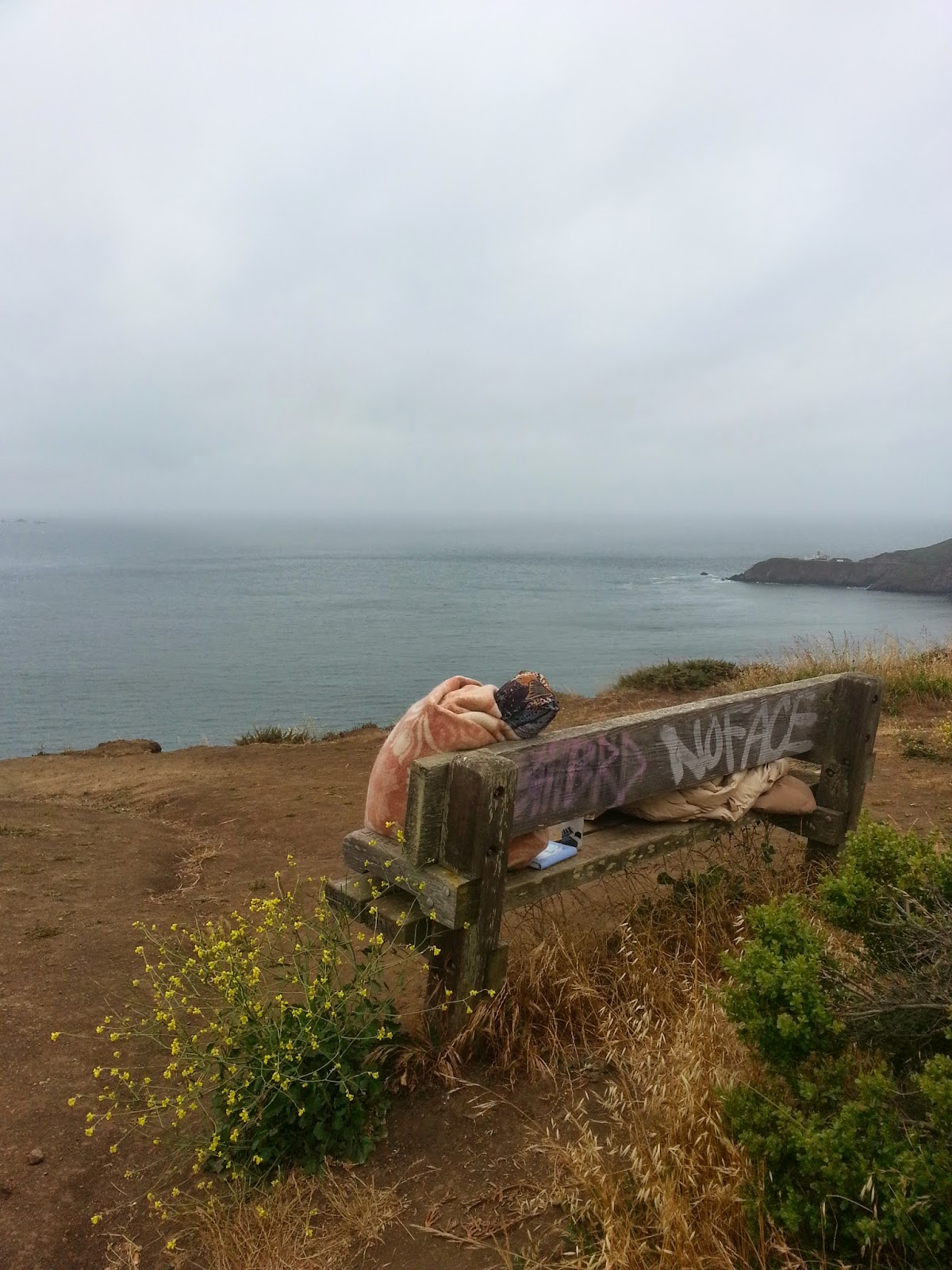 I wrote that before bed. The city lights were gleaming that night on the fog, the bridge and surrounding hills all lit up. 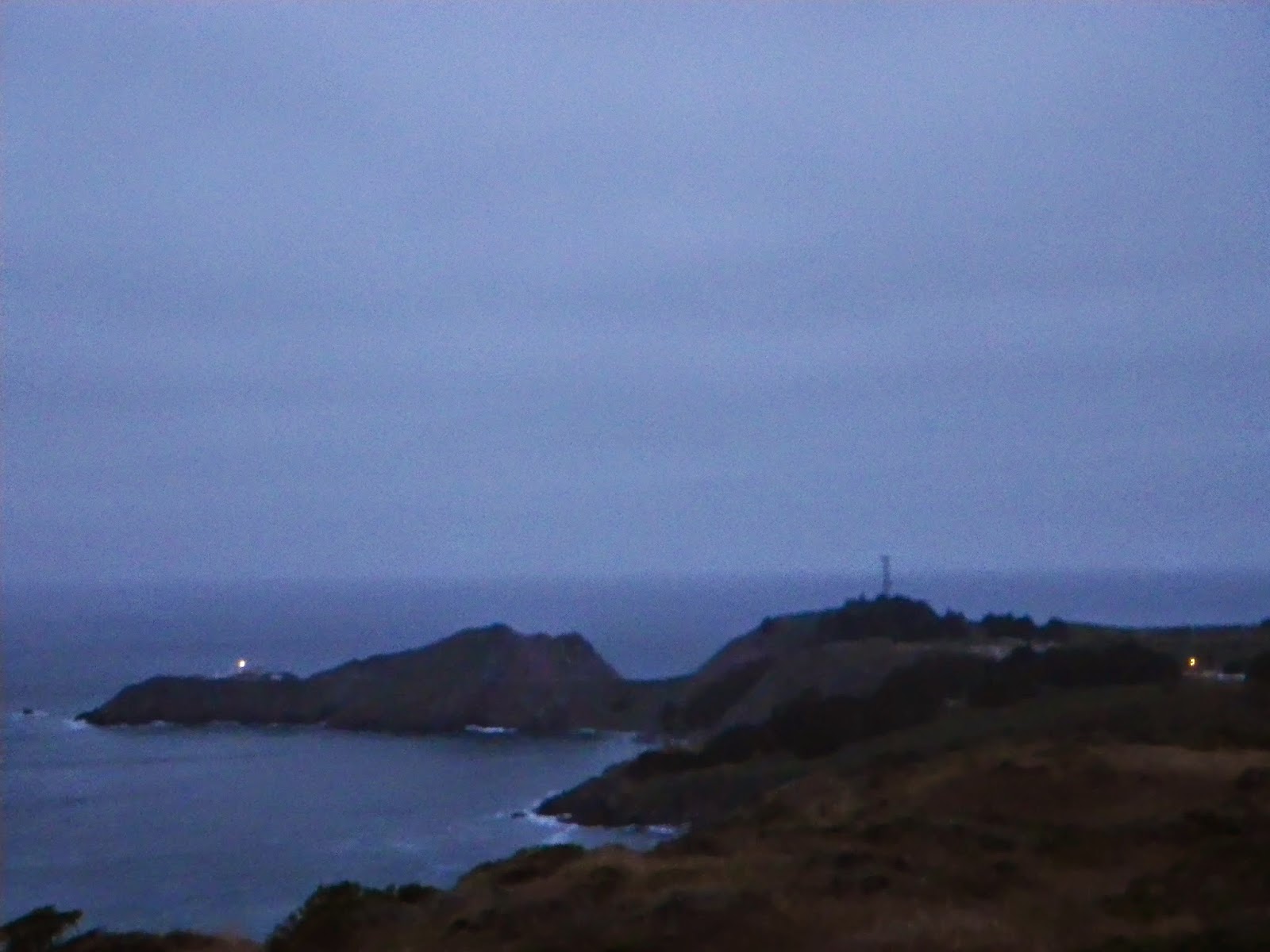 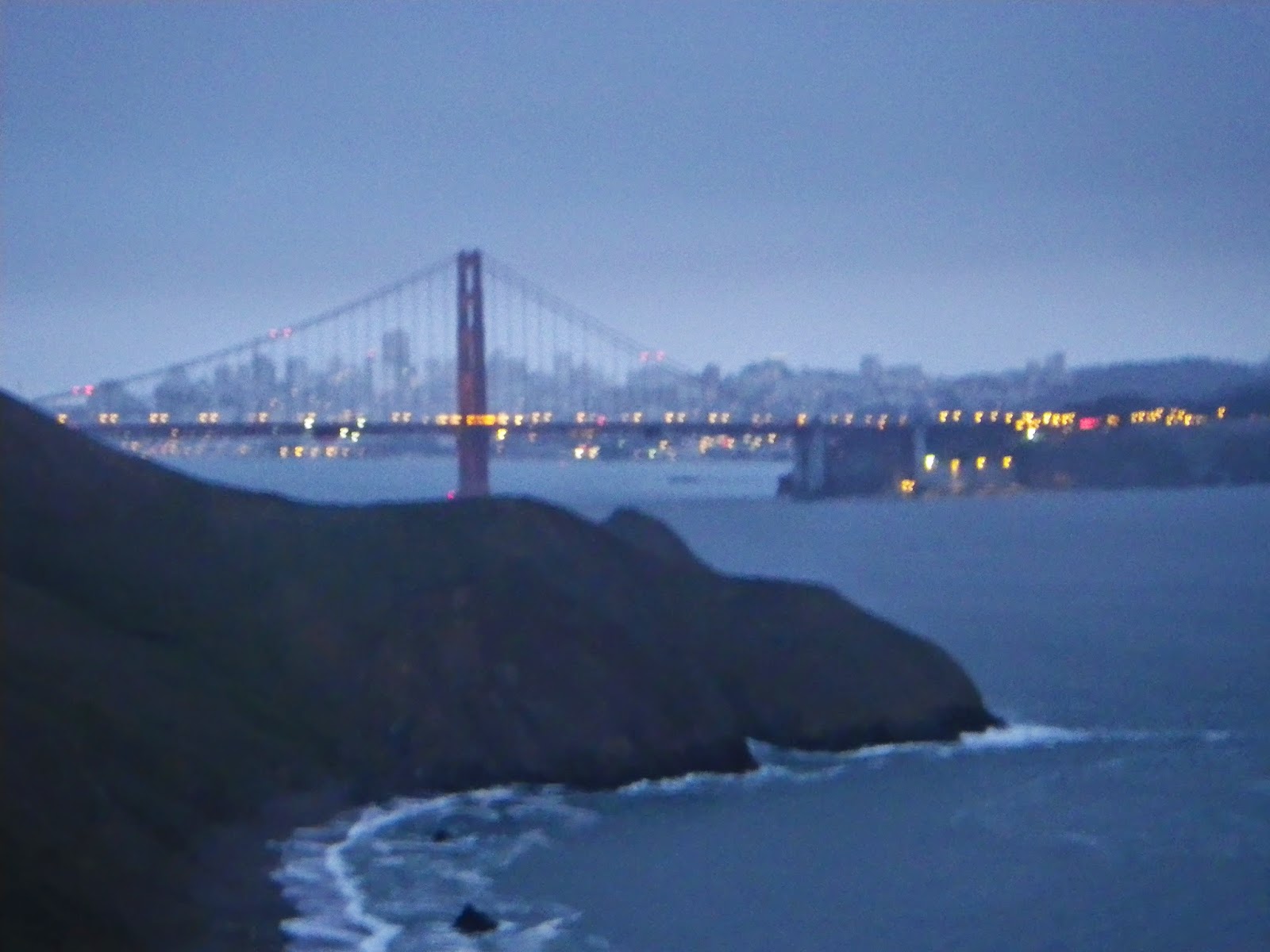 Unfortunately Maggie had a bad feeling about the spot. We were allowed to camp there, there were no signs, but she just felt like we'd seen strange people around and the spot was pretty claustrophobic. We were in a small pullout in a world war 2 fortification, directly on the side of a seldomly trafficked road that was an 18 percent grade, winding one way downhill. There were cliffs on both sides but the fort blocked the cliffs behind us and there was a nice bench on top of the fort with a spectacular view. We both liked the spot but Maggie was a little scared of the dark there, it got a little creepy because nobody came down that road but if they did they would have to drive right by us.

Right as I was falling asleep Maggie woke up out of a dream and was worried telling me a car just drove past.
"I think you must have been dreaming that Maggie, I didn't notice at all."
We sat and listened very very quietly, "slam" we heard a car door close, possibly far off but we couldn't tell how far.

"Let's get out of here."Maggie said.
"Maggie we are really going to have a hard time finding another spot, and do you really want to drive down this thing at night? We'll be fine."

It was Taos New Mexico all over again. We listened for longer and heard what sounded like a distant chicken or dog. It was strange but slowly we fell asleep.

Maggie woke me up at 3 a.m. "Oh my god Mike there's a car!" Sure enough right next to us there was a junky old pickup truck sitting there revving it engine. Then it drove away. We were both so chilled.

She wanted to leave, I hesitated. I said, "Let's just sit up in the front for a while." As I was walking to the front she screamed, "oh my god, Mike oh my god!" I ran back and grabbed my ice axe, "what, what is it??" I howled into the night, her eyes were searching the night behind me with terror. I looked around too, expecting to see someone, but it was nothing.

I had inadvertently closed the window to the cab from the outside and it scared her. It was nothing. "Let's go."

We wound up pulling into a different town and sleeping out the rest of the night under a big tree. In the morning some tractors woke us up at 8am mowing away the sides of the roads. In my dream I thought they were cutting down the tree we were sleeping under.

That's how our night went but it had been a good day, we woke up in Henry Cowell and had nice and cheap coin showers. We ate Mexican food in Half Moon Bay. We got stuck in lots of traffic but had fun. Then we went to San Francisco and ate ice cream at Ghirardelli. We walked around the wharf. We drove across the Golden Gate Bridge and in the process of photographing it found that nice spot. We hung out there as the sun went down and really enjoyed ourselves. It was certainly a day to remember. 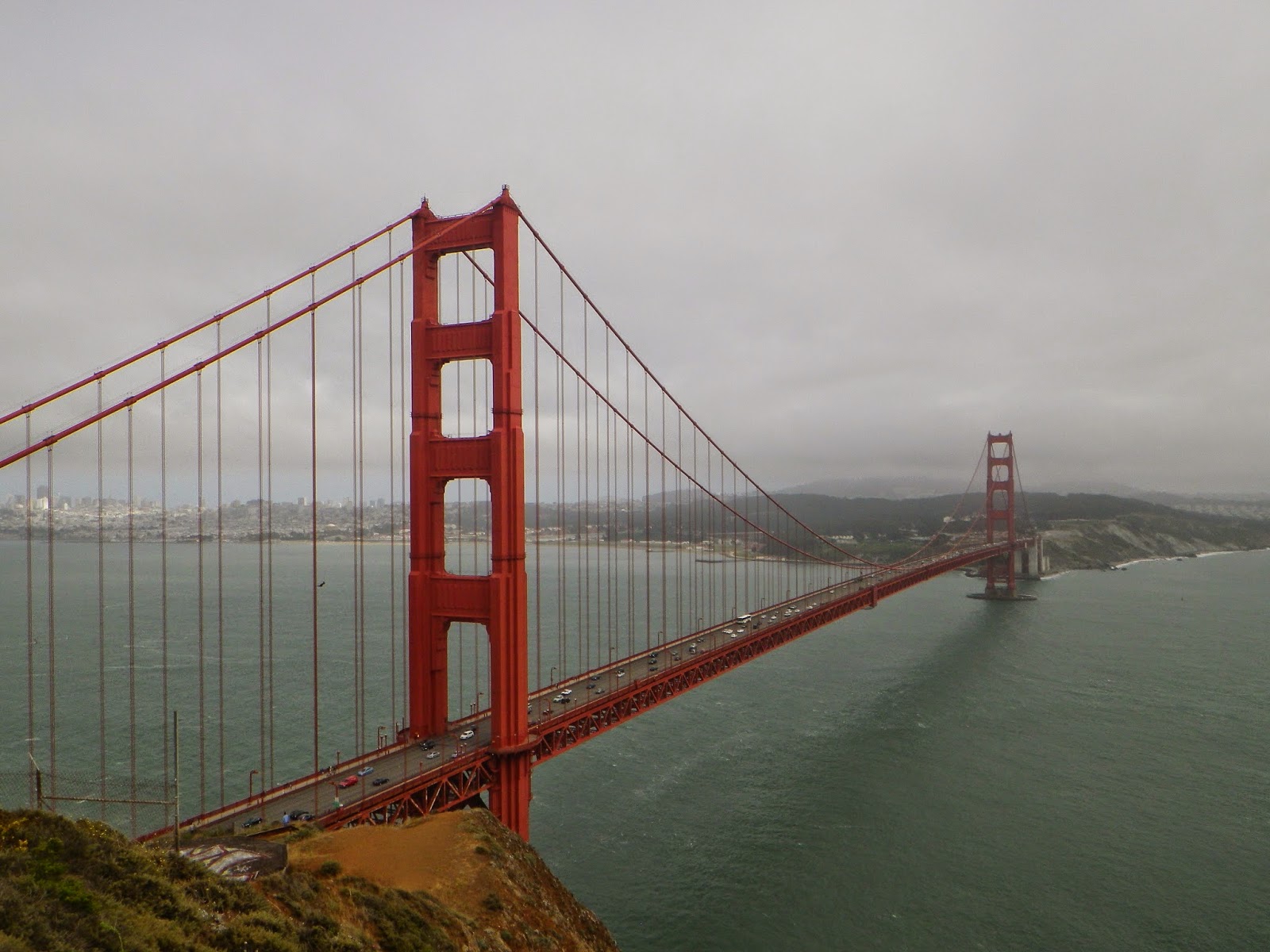 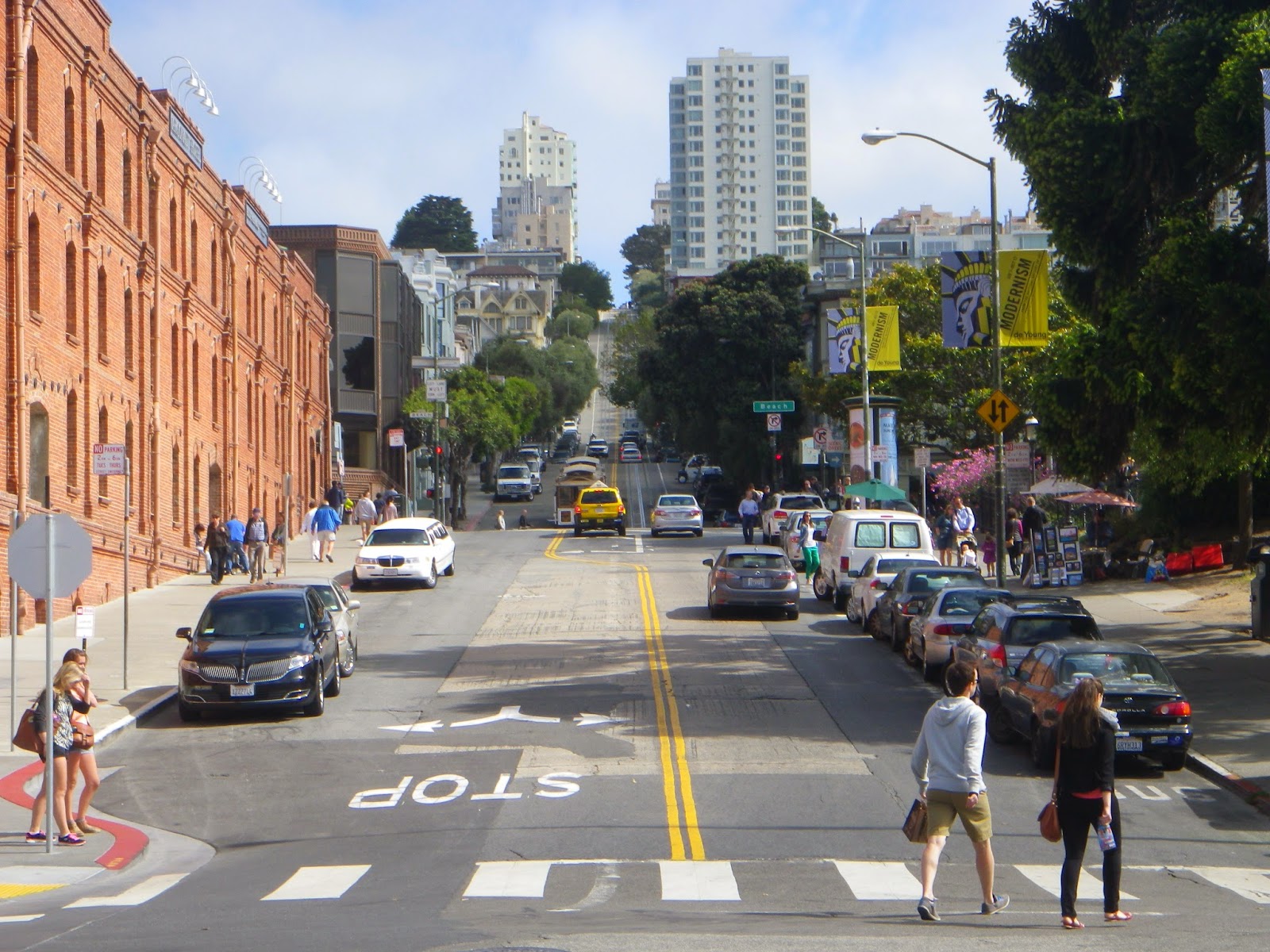 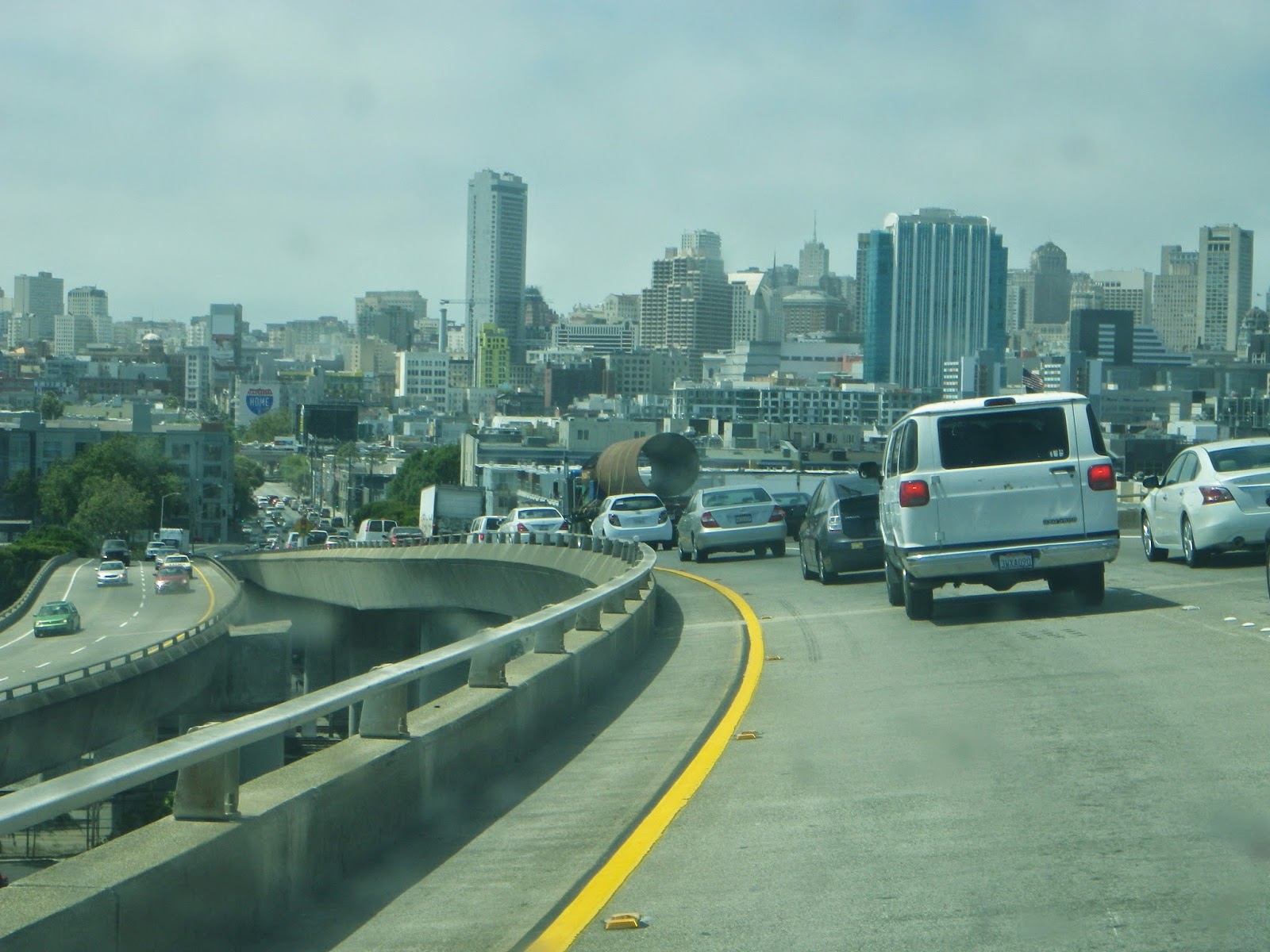 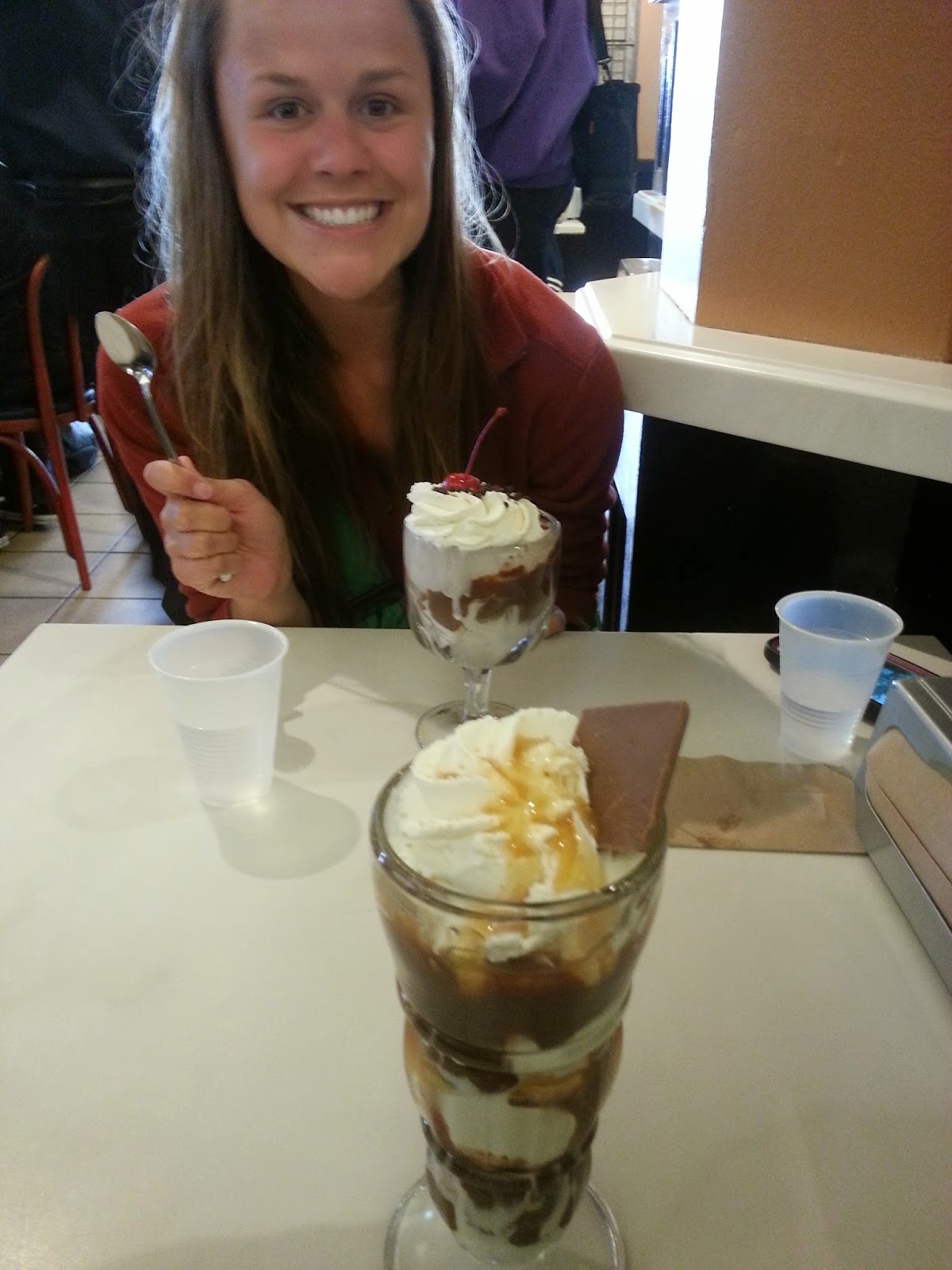 California is beautiful but so crowded. We're finding it difficult to find a spot where we can just 'be'. We'll be driving through towns searching unsuccessfully for somewhere to cook lunch but also realize our backs arent sweaty anymore, the climate is perfect. Thats why its so crowded here, because its such a nice place. I think I like the desert better though...
Posted by Unknown at 10:20 AM