This was an epic day.

Woke up early at 6 a.m. in the Carson National Forest outside Taos, New Mexico to greet a cool, moist mountain morning. 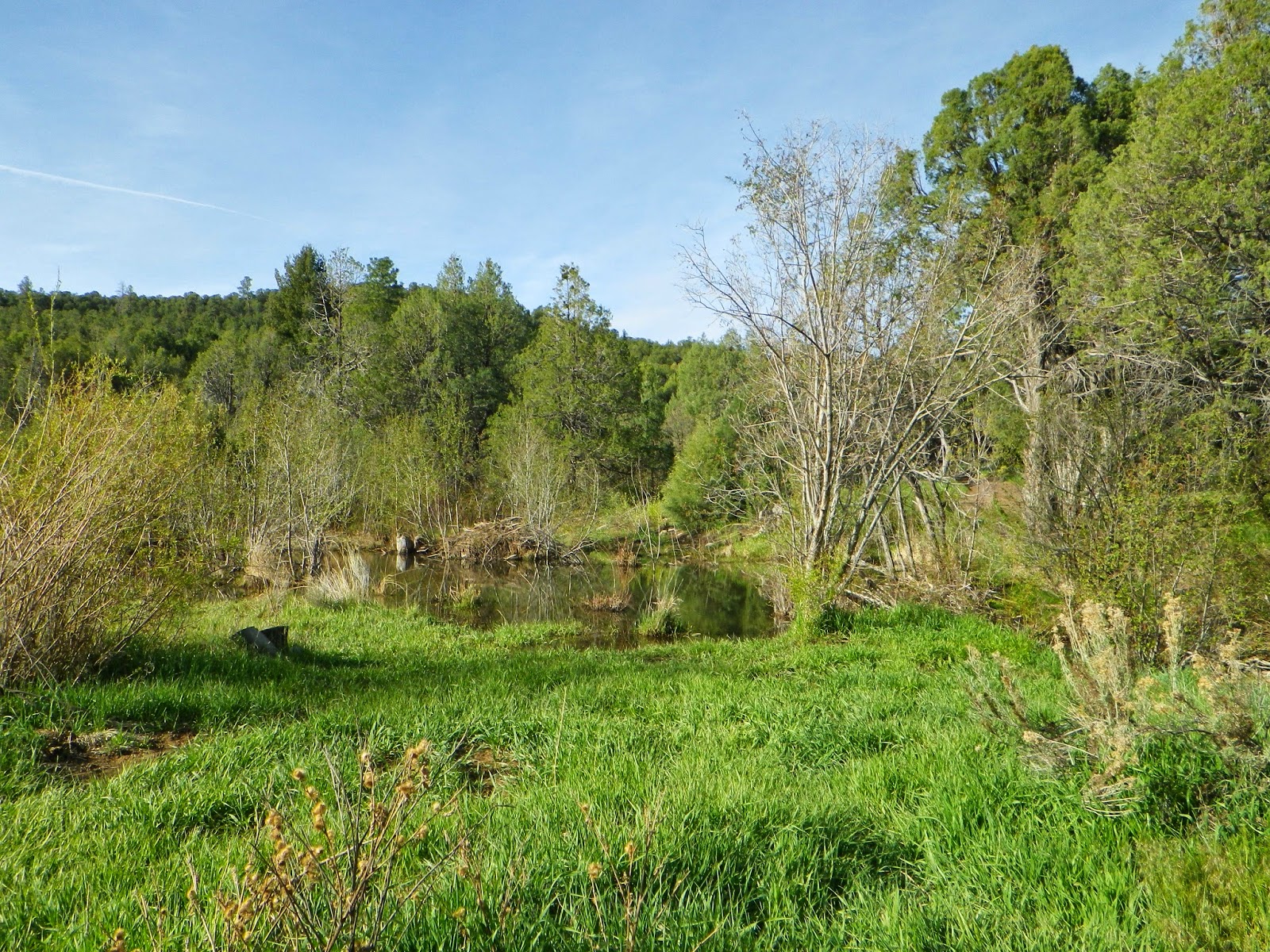 We were parked by a fresh and strong flowing stream so after washing dishes and some other procrastination, I worked up the nerve for a shower. I walked in, very zen, and it felt so cold it was burning hot. My legs felt like they were being stung by bees, it was about knee deep. Then I dunked my head in, shampooed, dunked in again to rinse. Had to rinse a couple times and then washed my body. 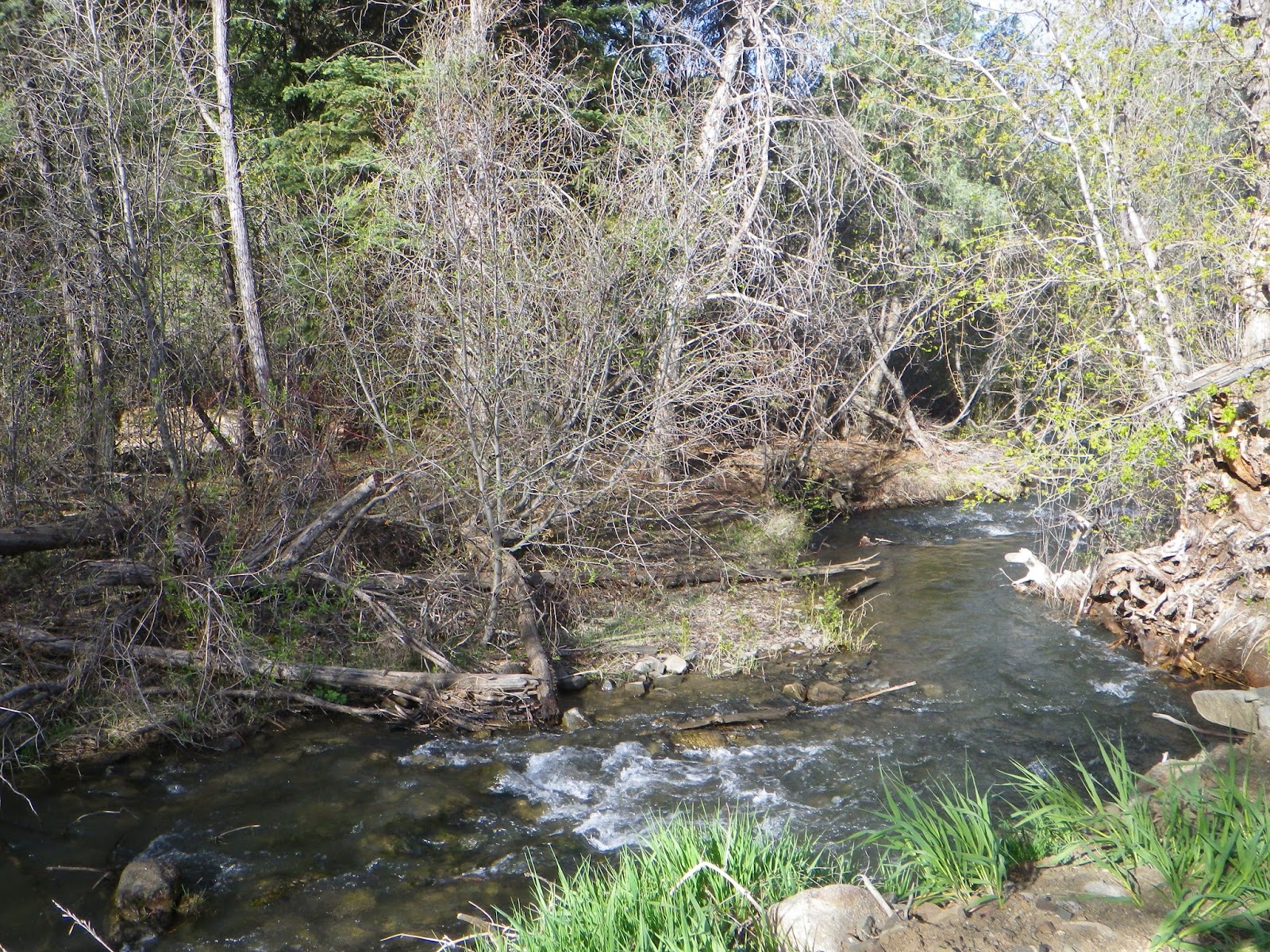 The outside layer of my face and head had lost feeling suddenly, as though the part of my head that I had control over was shrinking inward. It was an alarming feeling, I began to hyperventilate and my heart was beating out of control! I screamed and screamed, zen no more, and fell back in the creek as I climbed the muddy banks. I then ran into the truck and blasted the heat and advised Maggie not to have a shower!

But wow did I feel good later; clean and fresh like mountain stream, the water I learned was 51 degrees! So then we made our way to Taos Ski Valley. 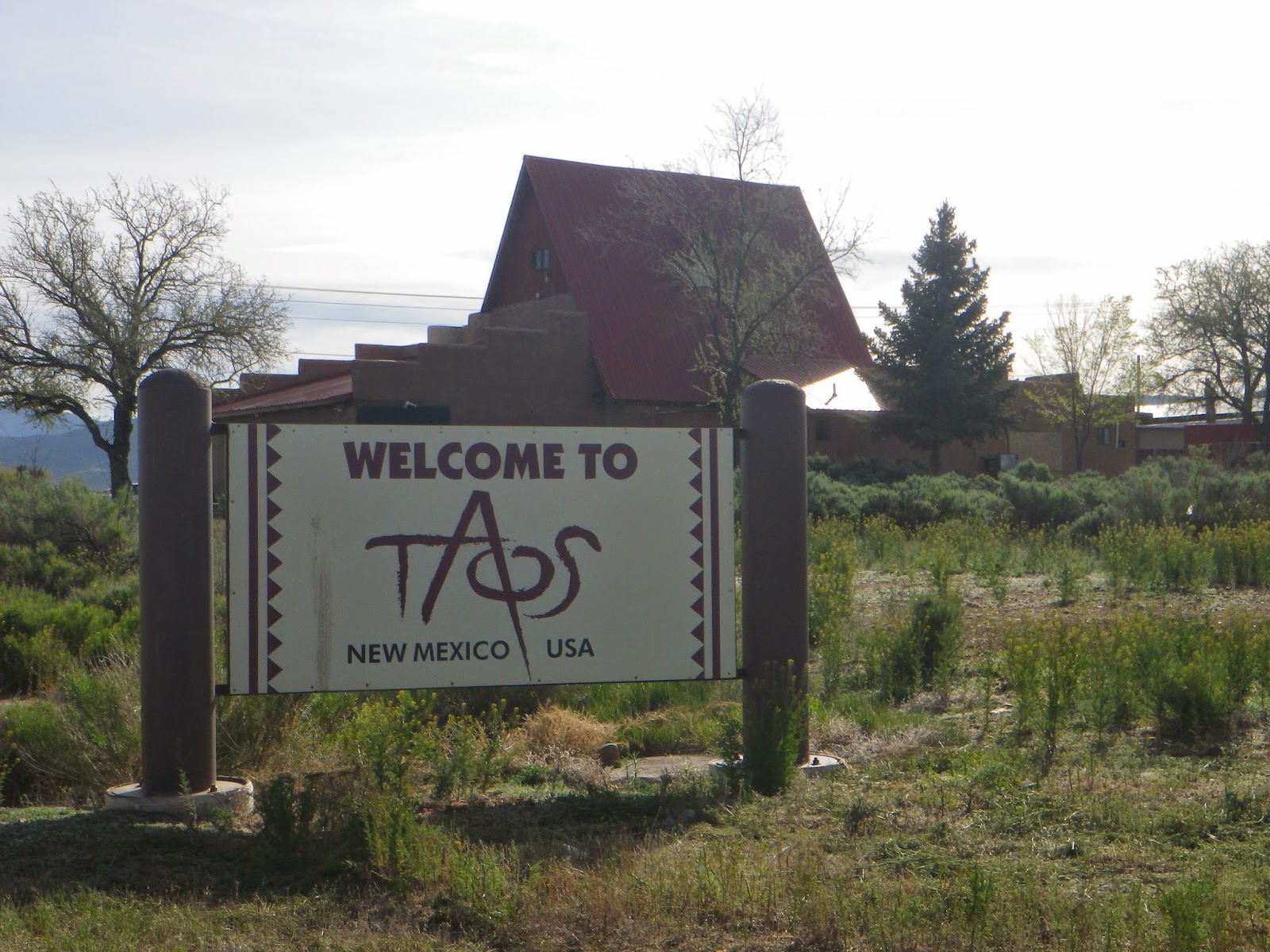 We began to take on the "Bull of the Woods" trail. A steep trail, beginning at 9400 feet, it was very beautiful. Following a cascading stream through a forest of birch and aspen and lodgepole pine. Right away we saw a big horn sheep on the trail. They startled us, but I was able to photograph them. 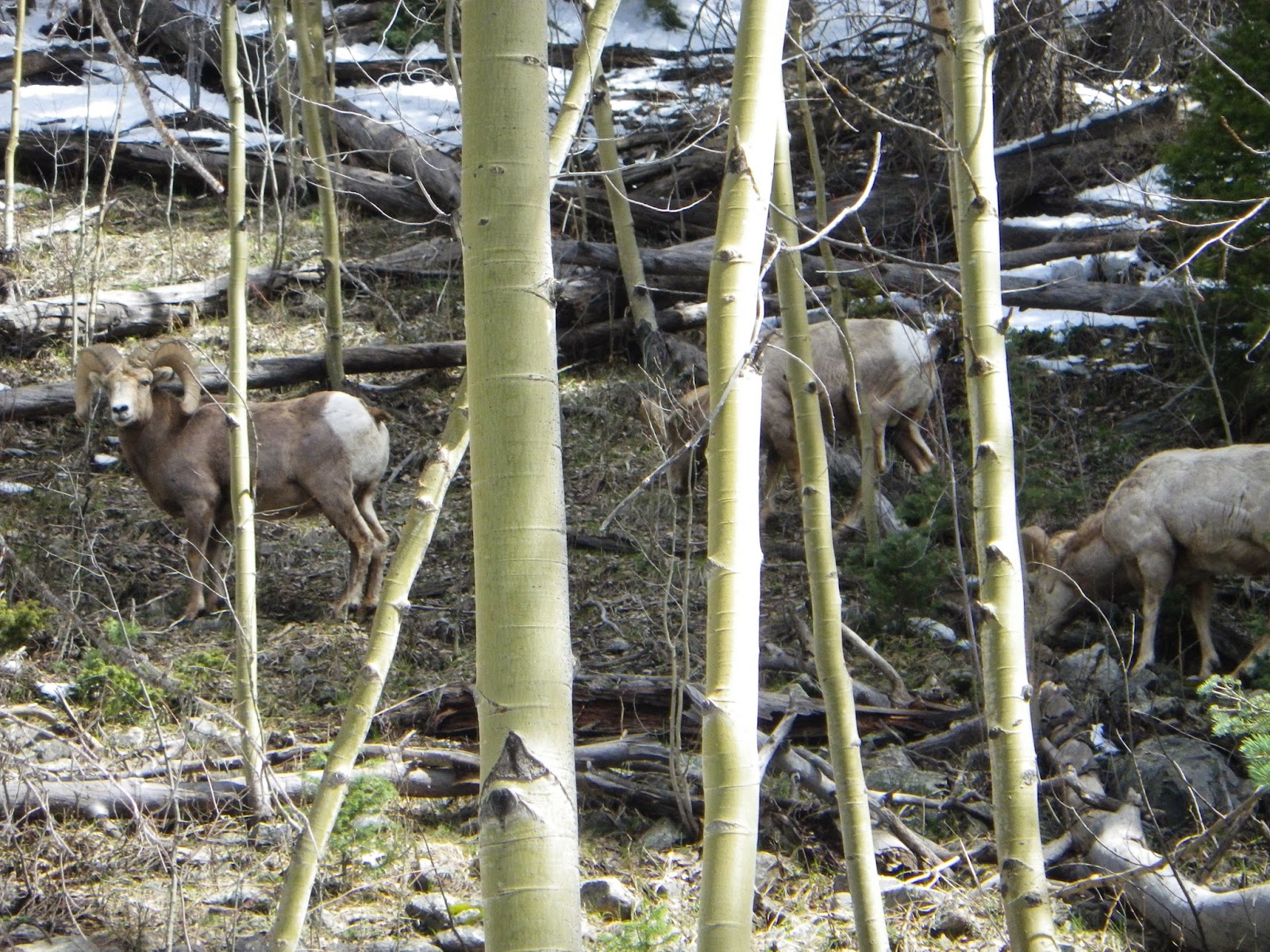 So majestic and huge. There was snow all around and as we ascended there was more. This trail was climbing Wheeler Peak, the tallest mountain in New Mexico. We weren't planning to actually make it to the top due to the snow, but I yearned to get somewhere with an open view. 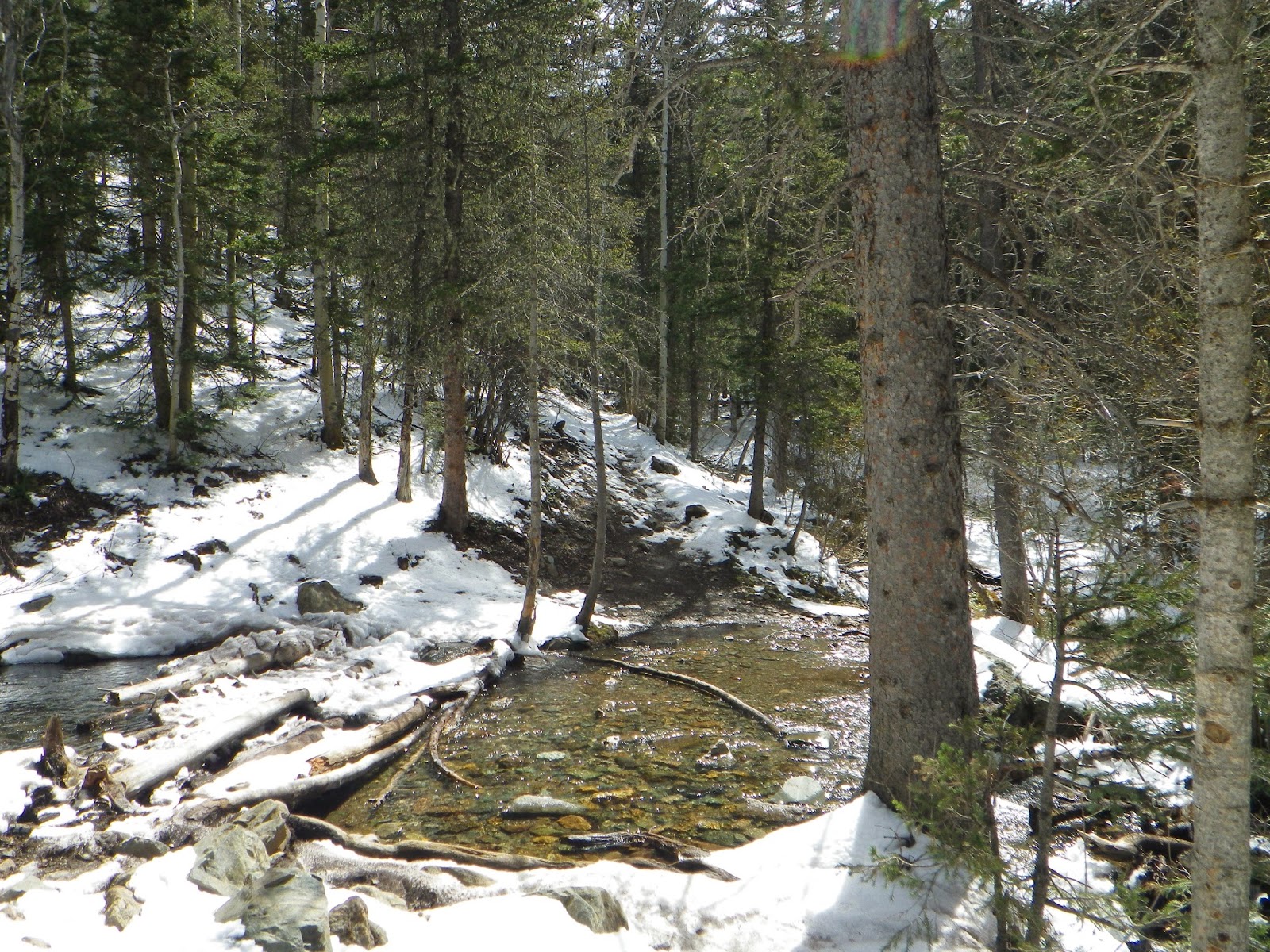 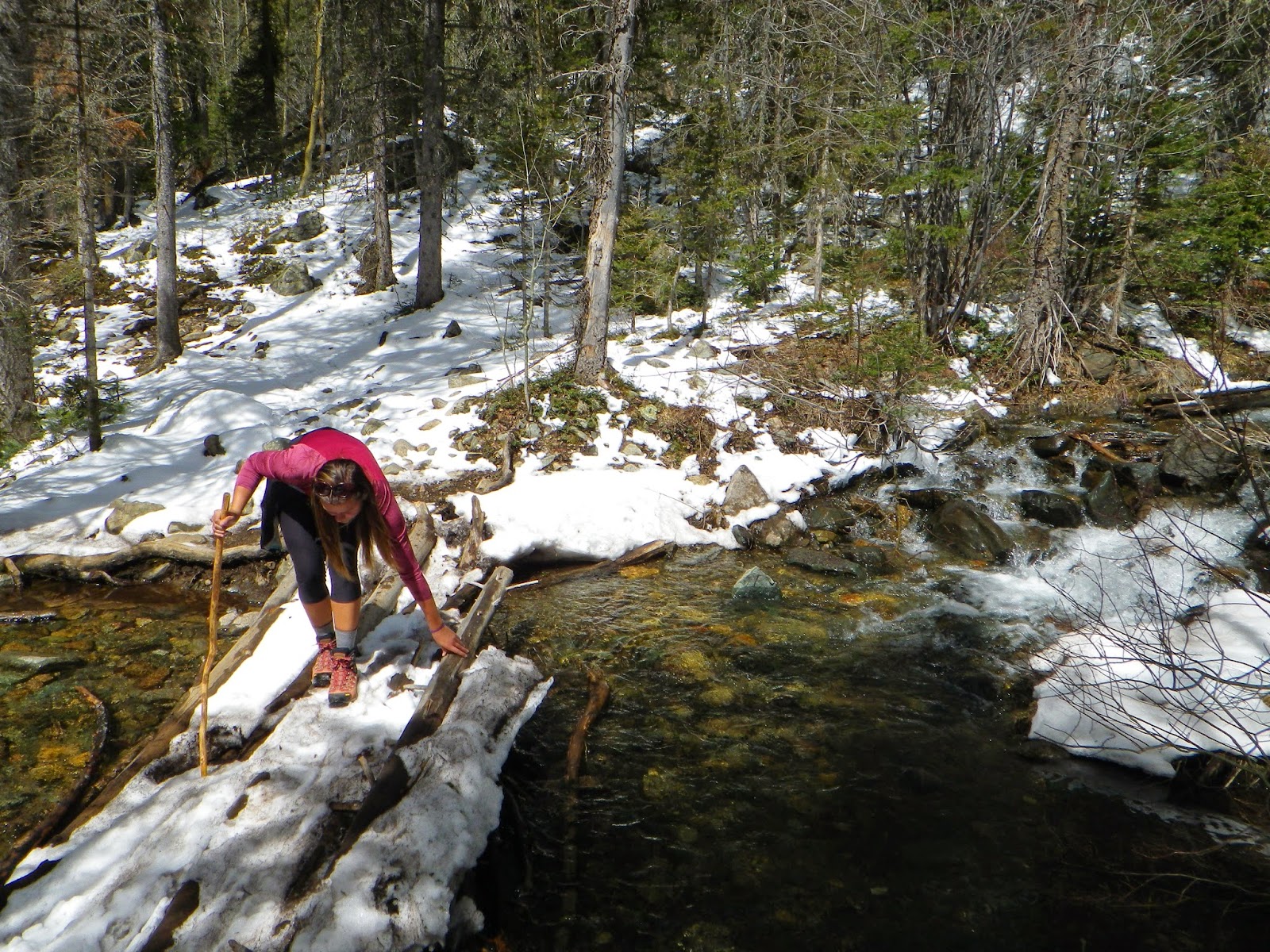 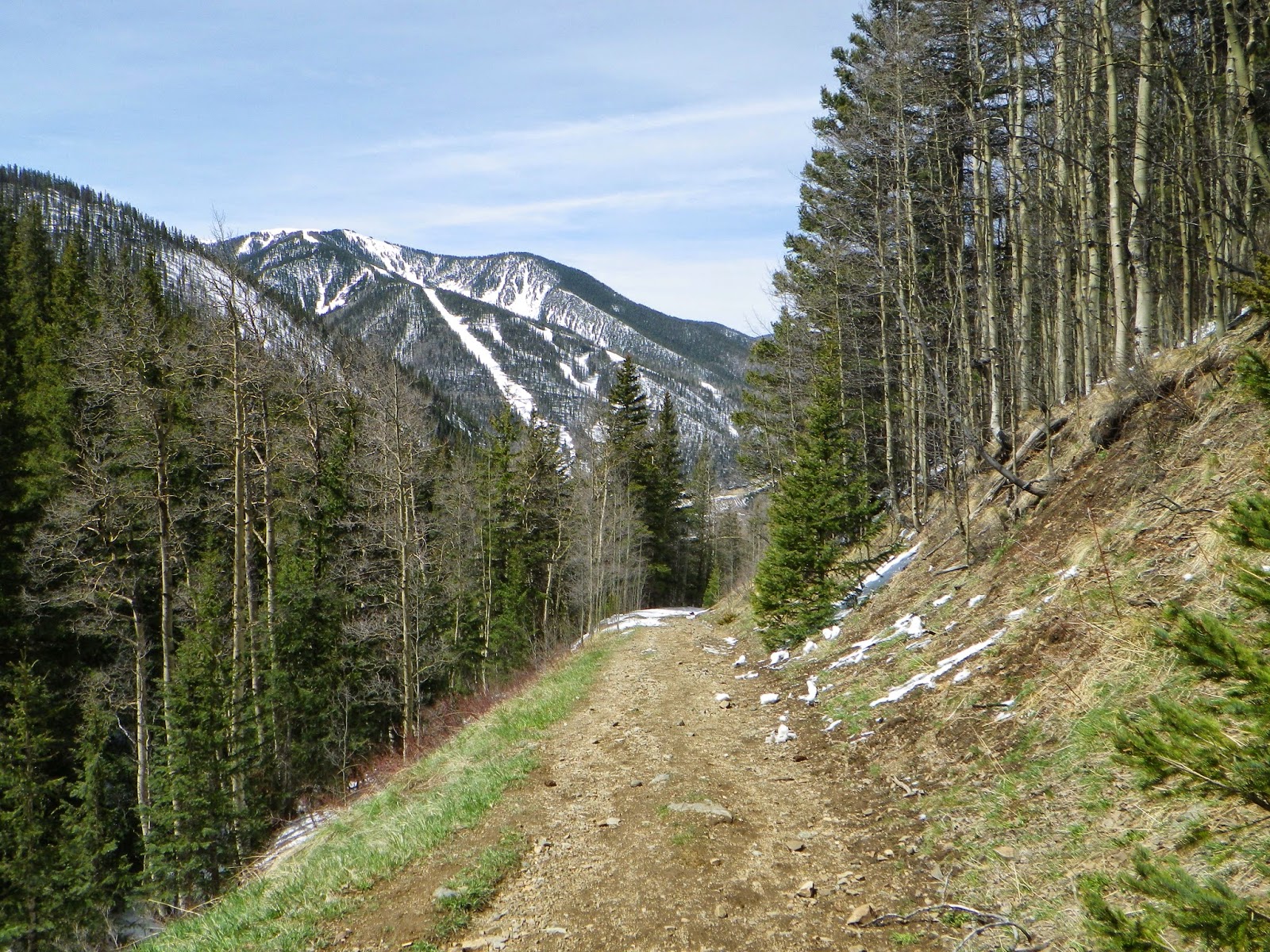 After we had gone 2 miles, the snow was ankle deep or more everywhere. The footprints we were following stopped. We were in a meadow, all pine trees now. I looked left, I looked right, searching for more footprints, but there were none. We couldn't proceed without some trail to follow. But then suddenly, one set appeared. One lonely set of footprints walking up a snowy hill. We followed them. The snow got deeper, it was piled against the trees in massive drifts that this one set of footprints easily crossed. 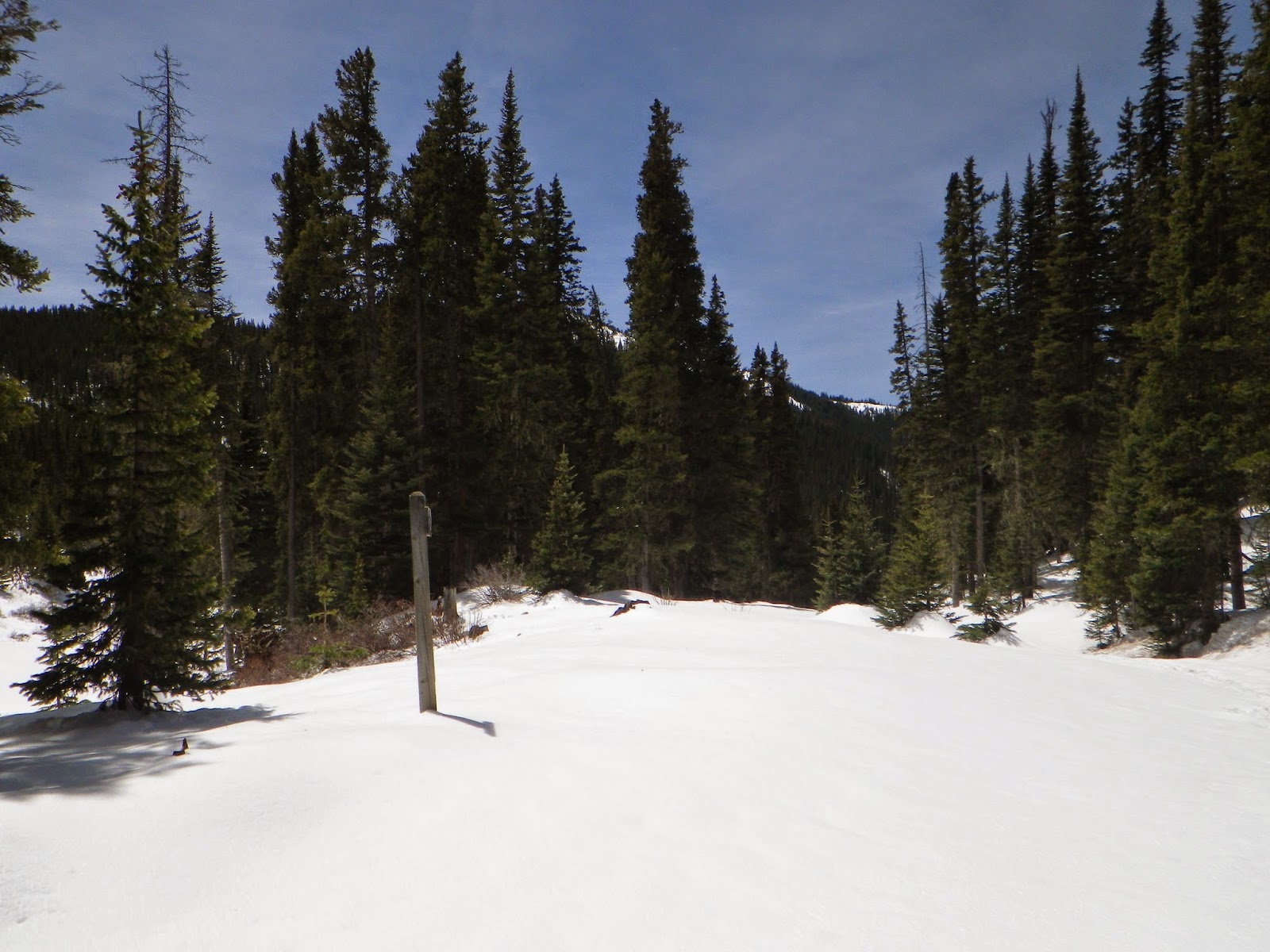 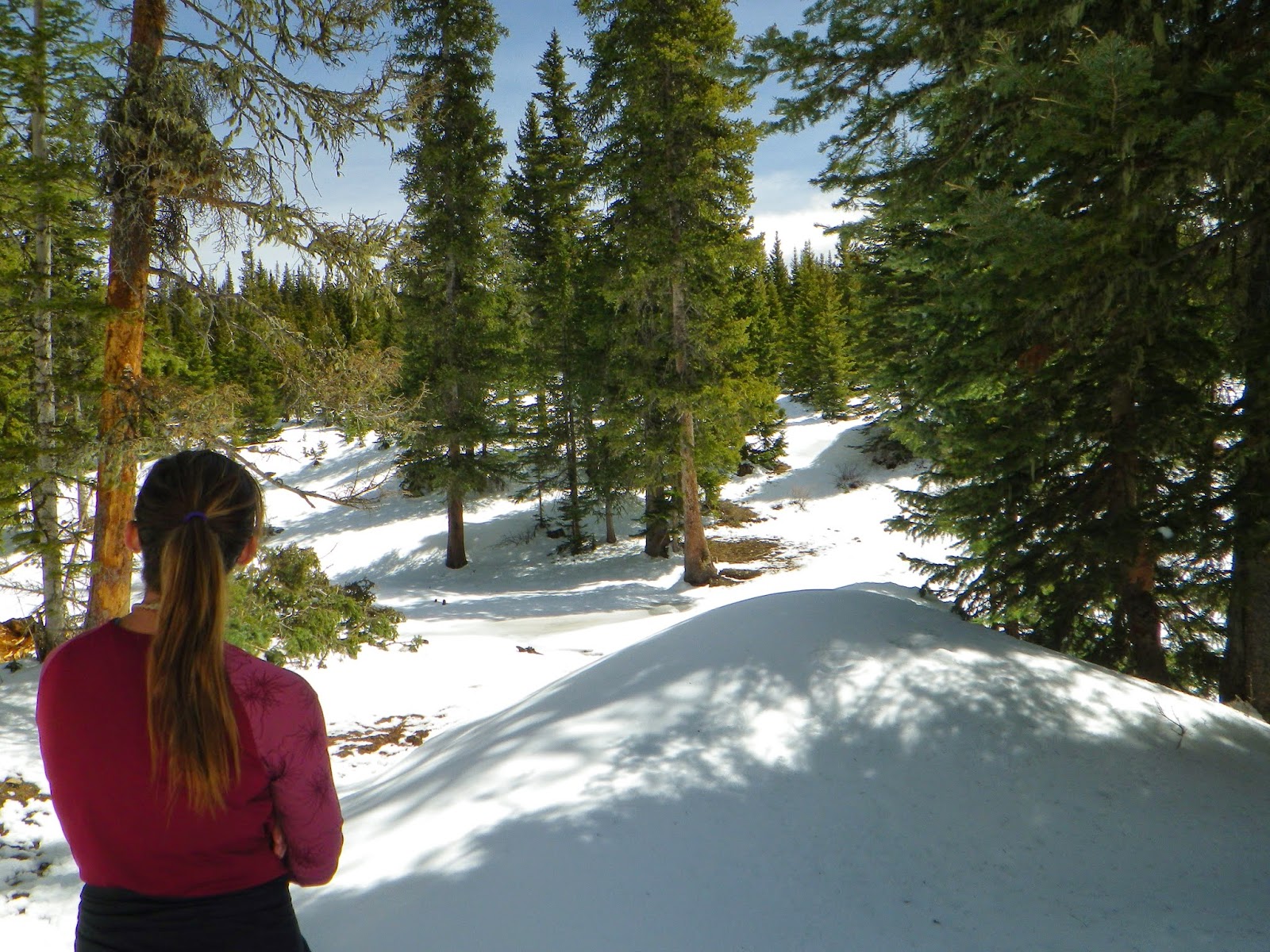 But there were no footprints heading back down the mountain, only out. So must this stranger still be up there? Would we meet this brave fellow who crossed the completely untravelled snow? We would sometimes sink in the snow up to our knees which was a little unsettling because we knew as it got later in the day the snow would only soften. My shoes were also not waterproof, and I was suffering from snow blindness for my lack of sunglasses. On top of that we forgot sunscreen.

We had come about 4 miles and I told Maggie, let's just go a little farther! The view was opening up and it was spectacular. 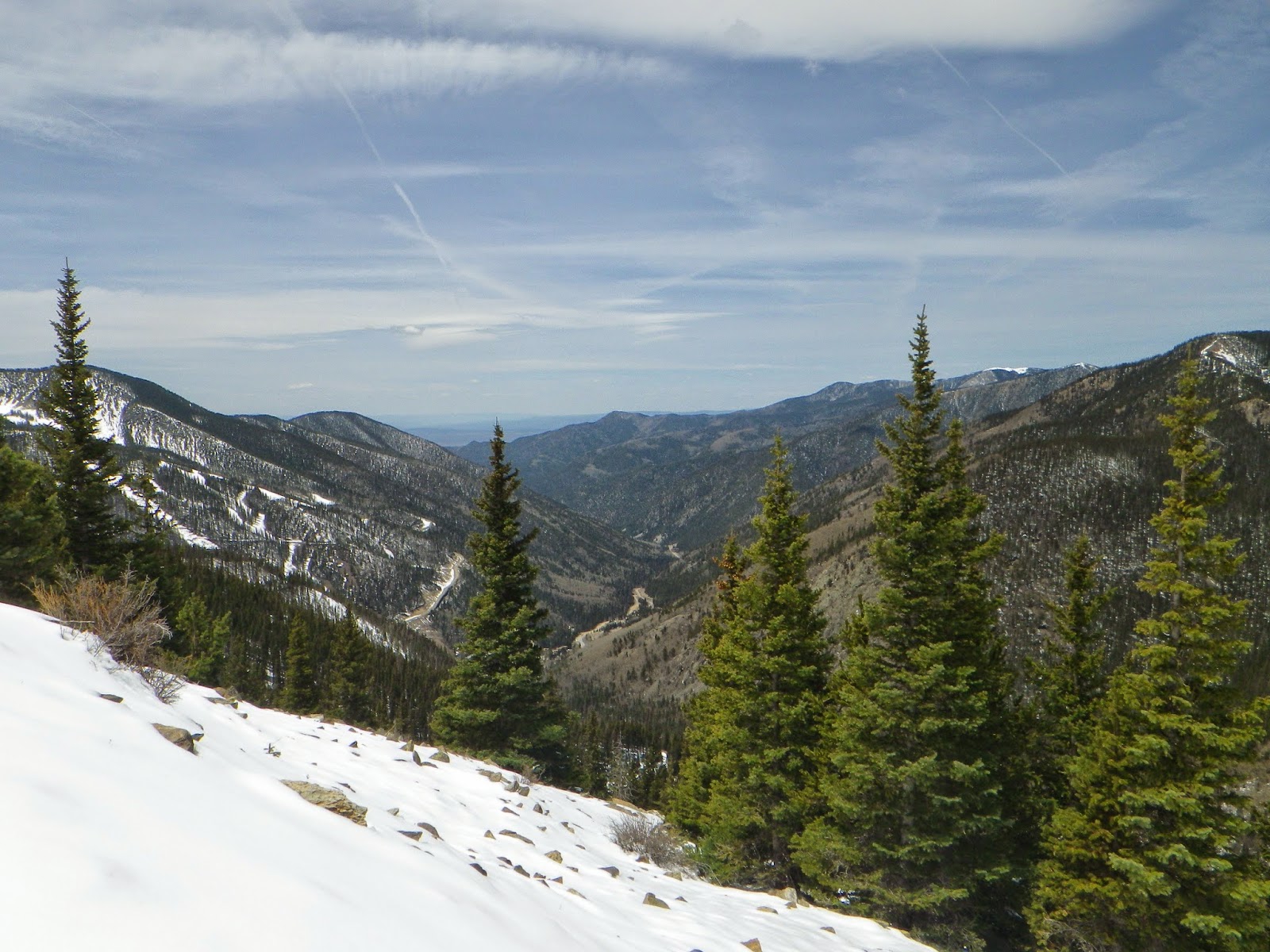 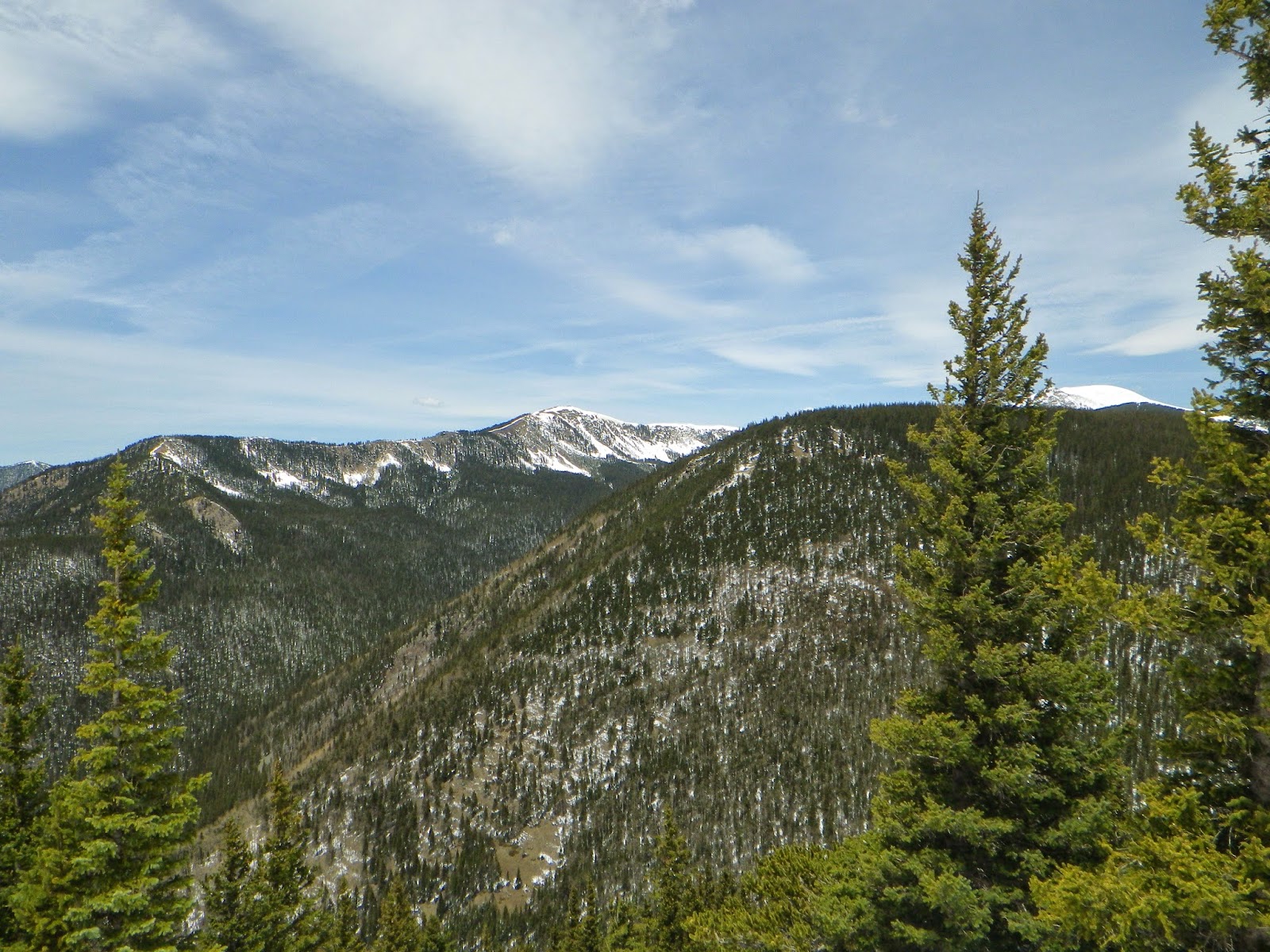 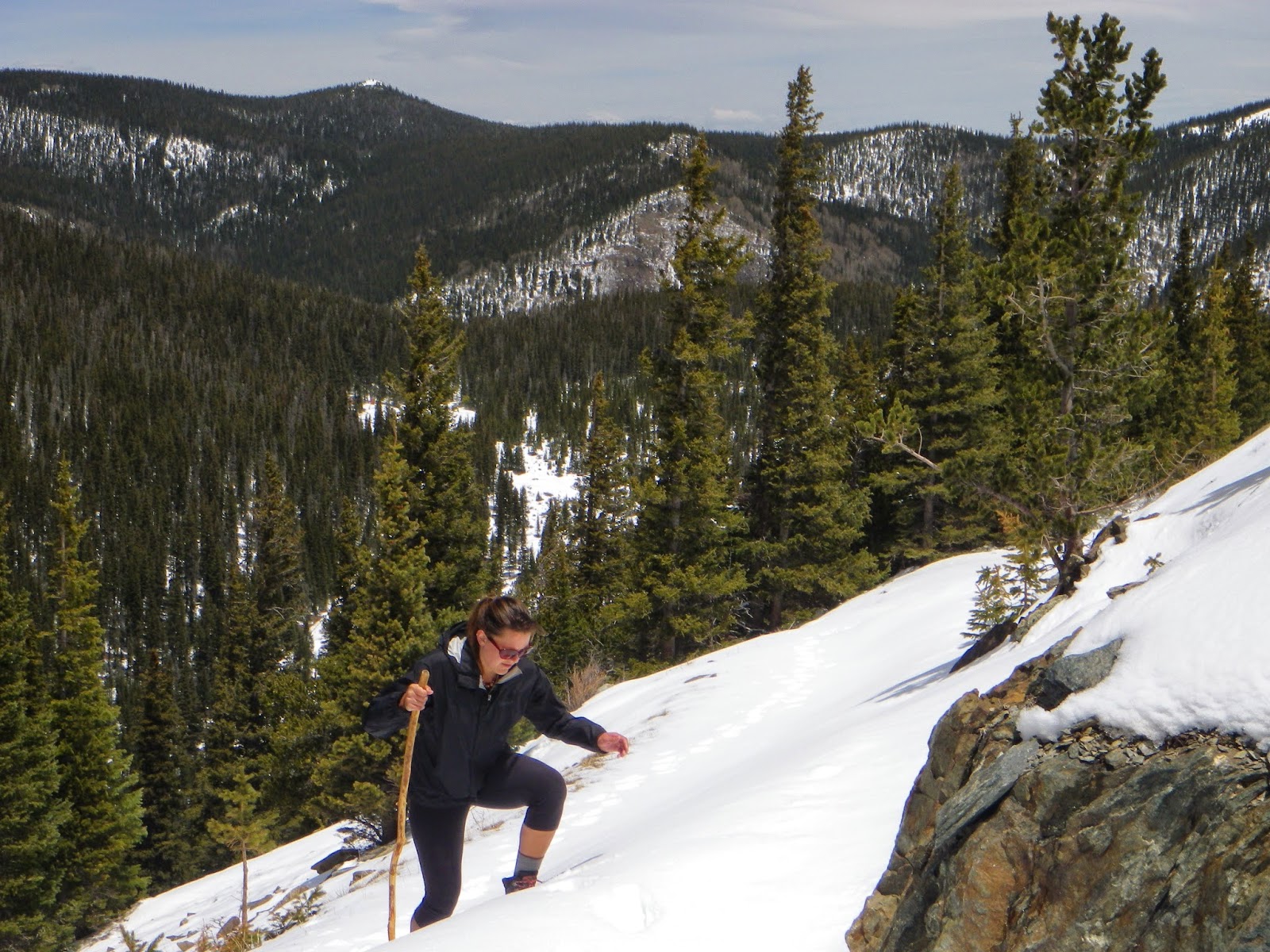 I pointed up to where the trail crests the ridge at what looked like a mountain summit. 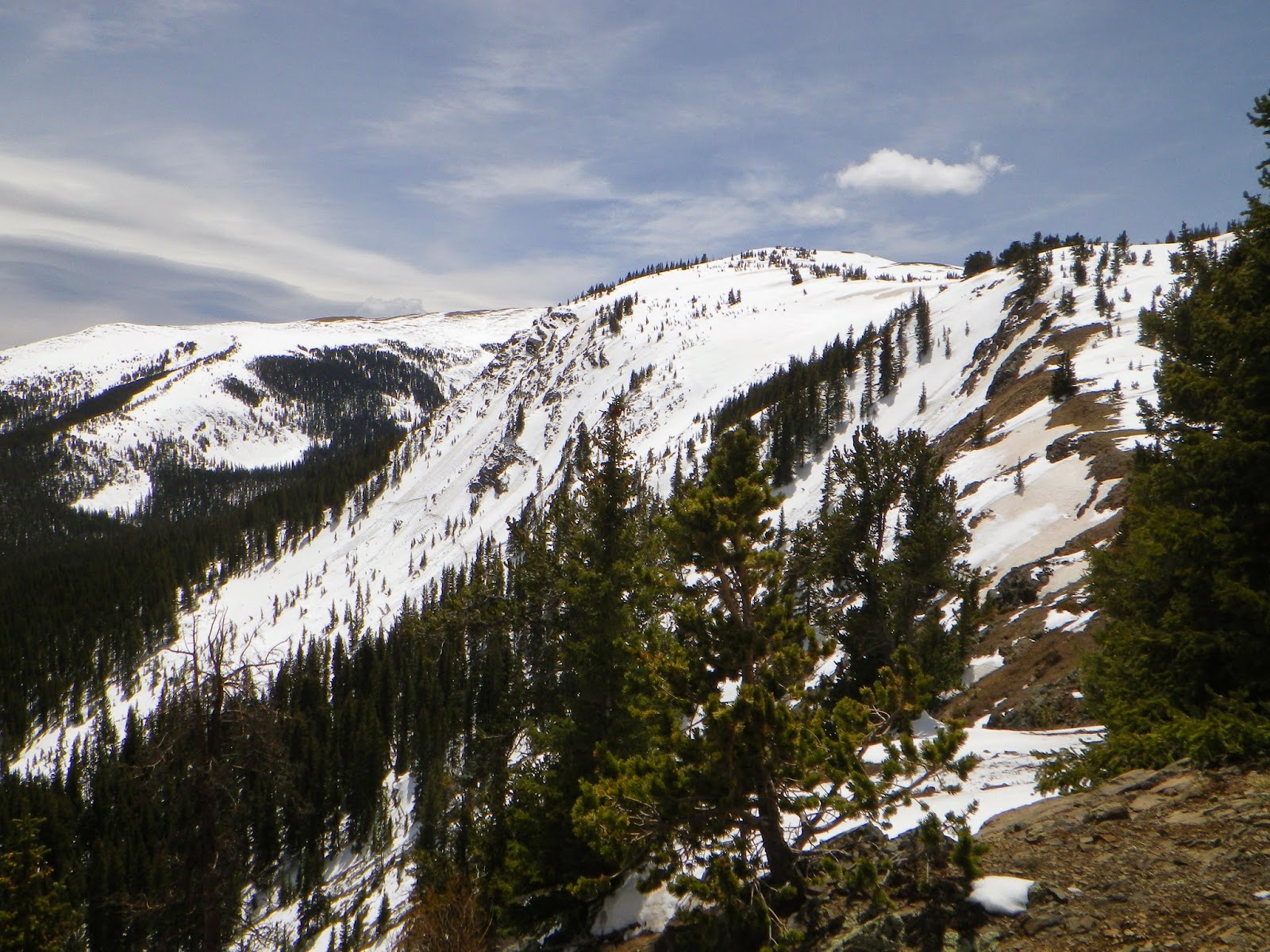 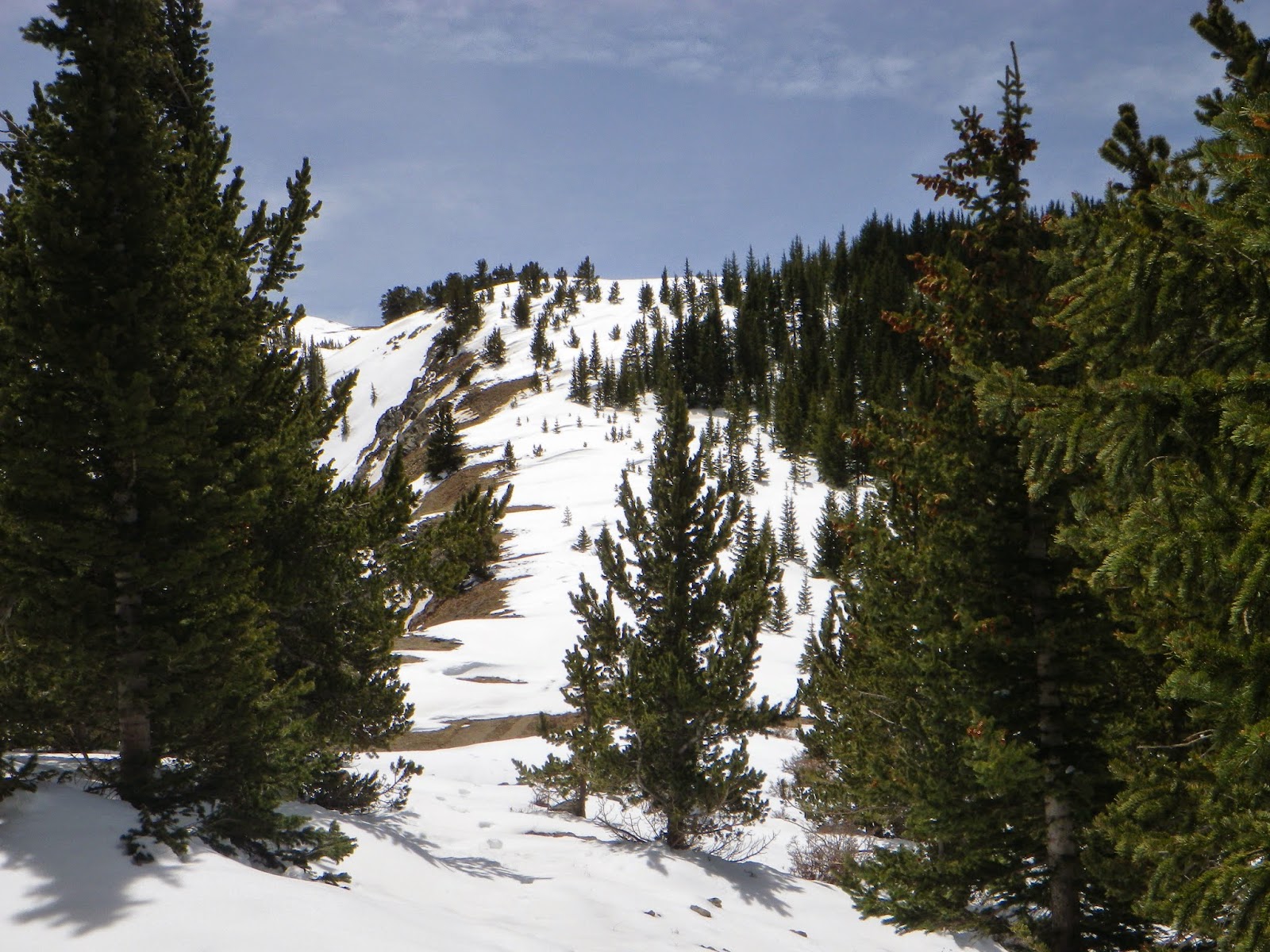 By now I was putting her through some true suffering but neither one of us wanted to turn around and give up. "That's Pina Colada mountain that we're trying to climb today, not Wheeler, and there's the summit!" The mysterious footprints snaked their way right up to a cairn, marking the summit of Pina Colada. The wind was blowing what felt like a hundred miles per hour at the top. The view of the Sangre de Cristo mountains sweeping and snow bound in all directions, this being the shoulder of the tallest mountain in the range. 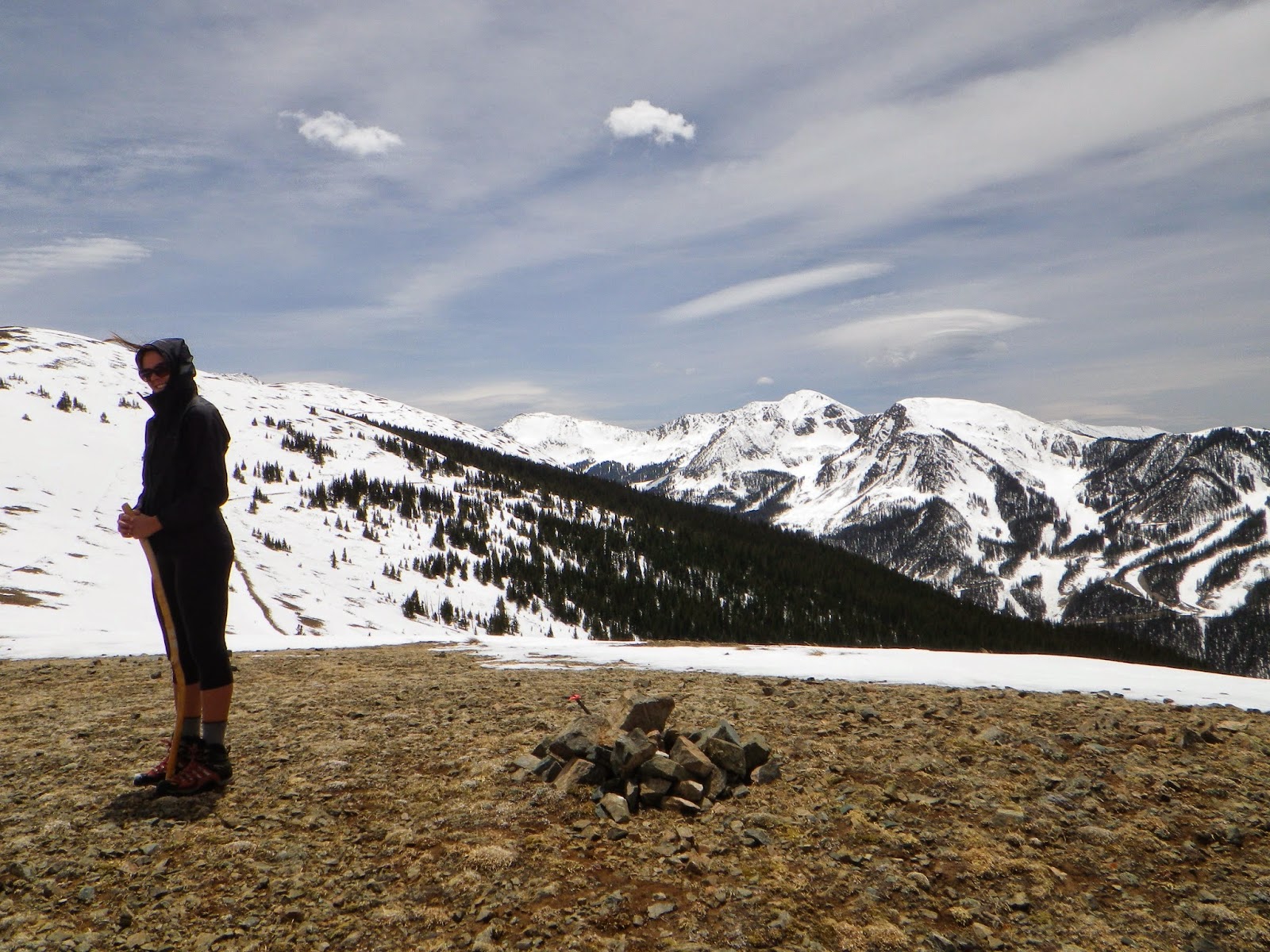 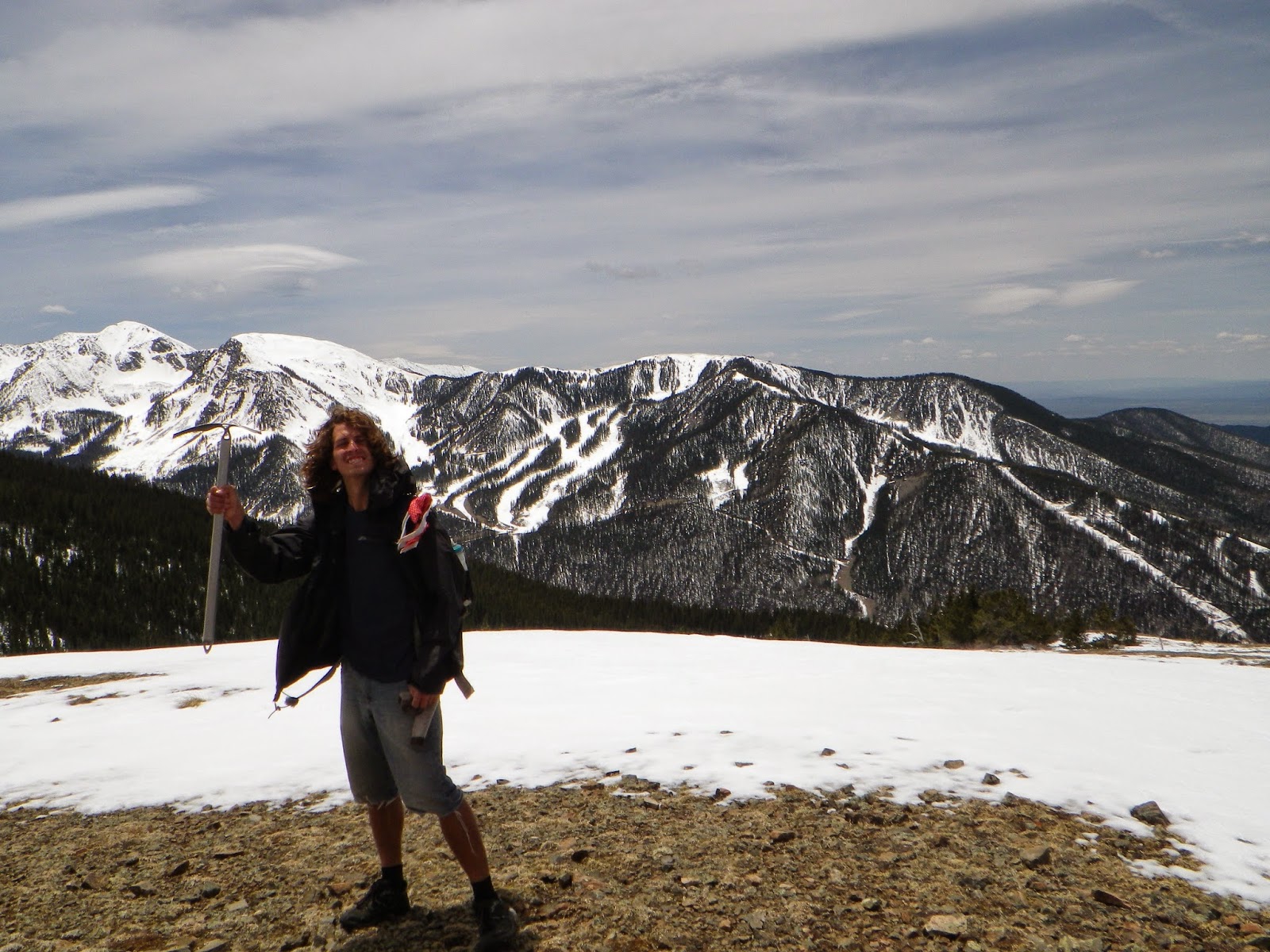 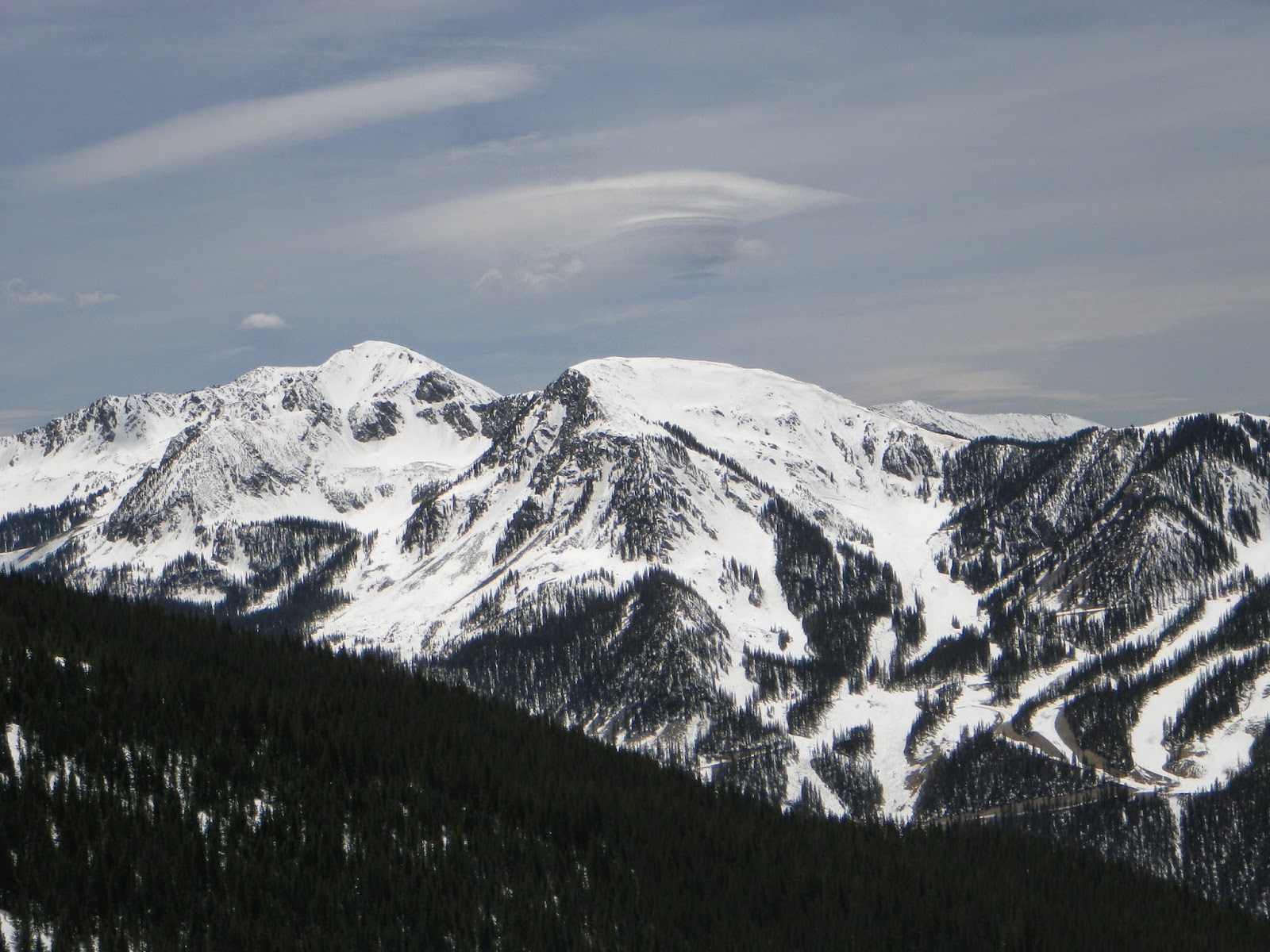 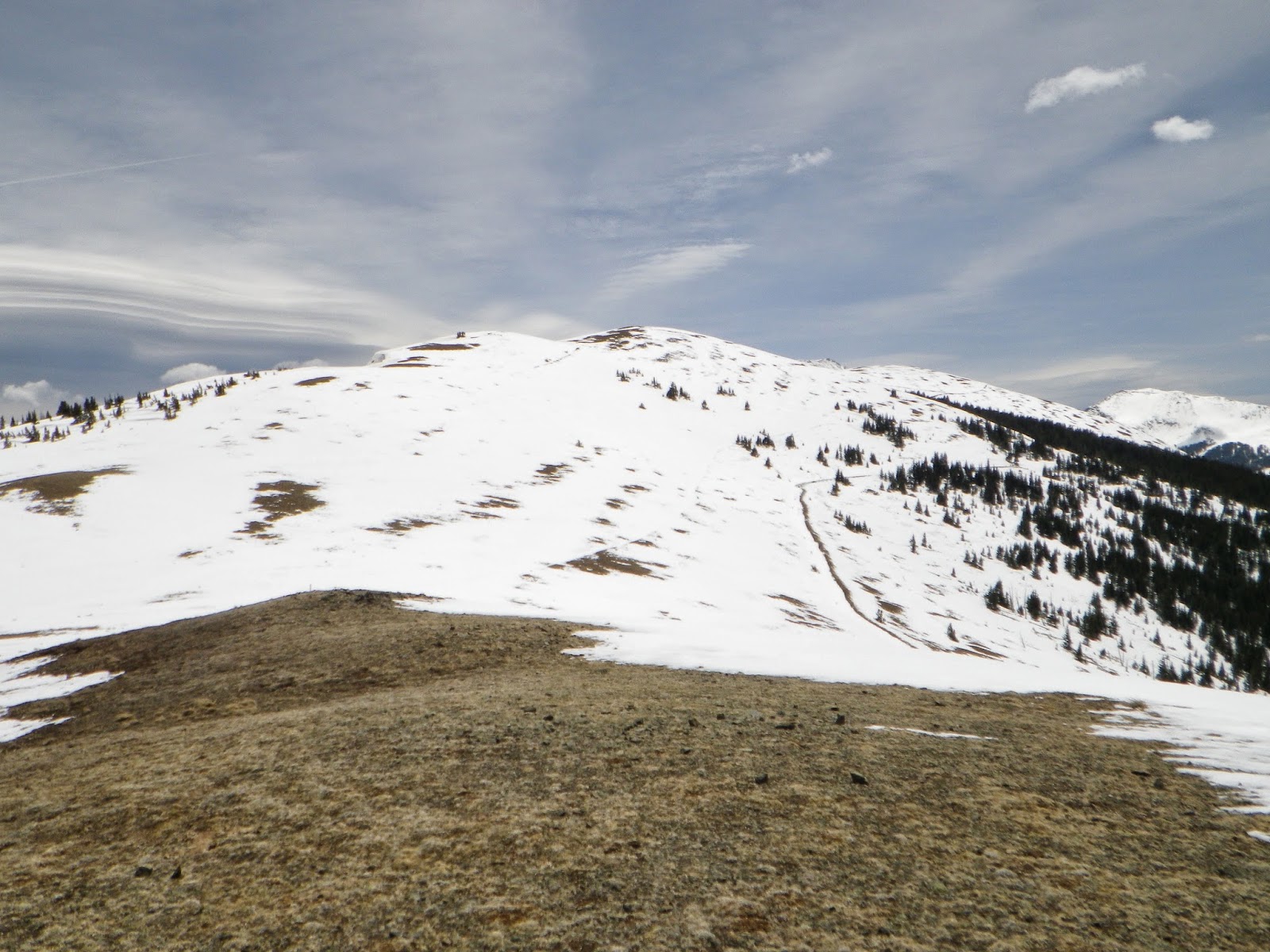 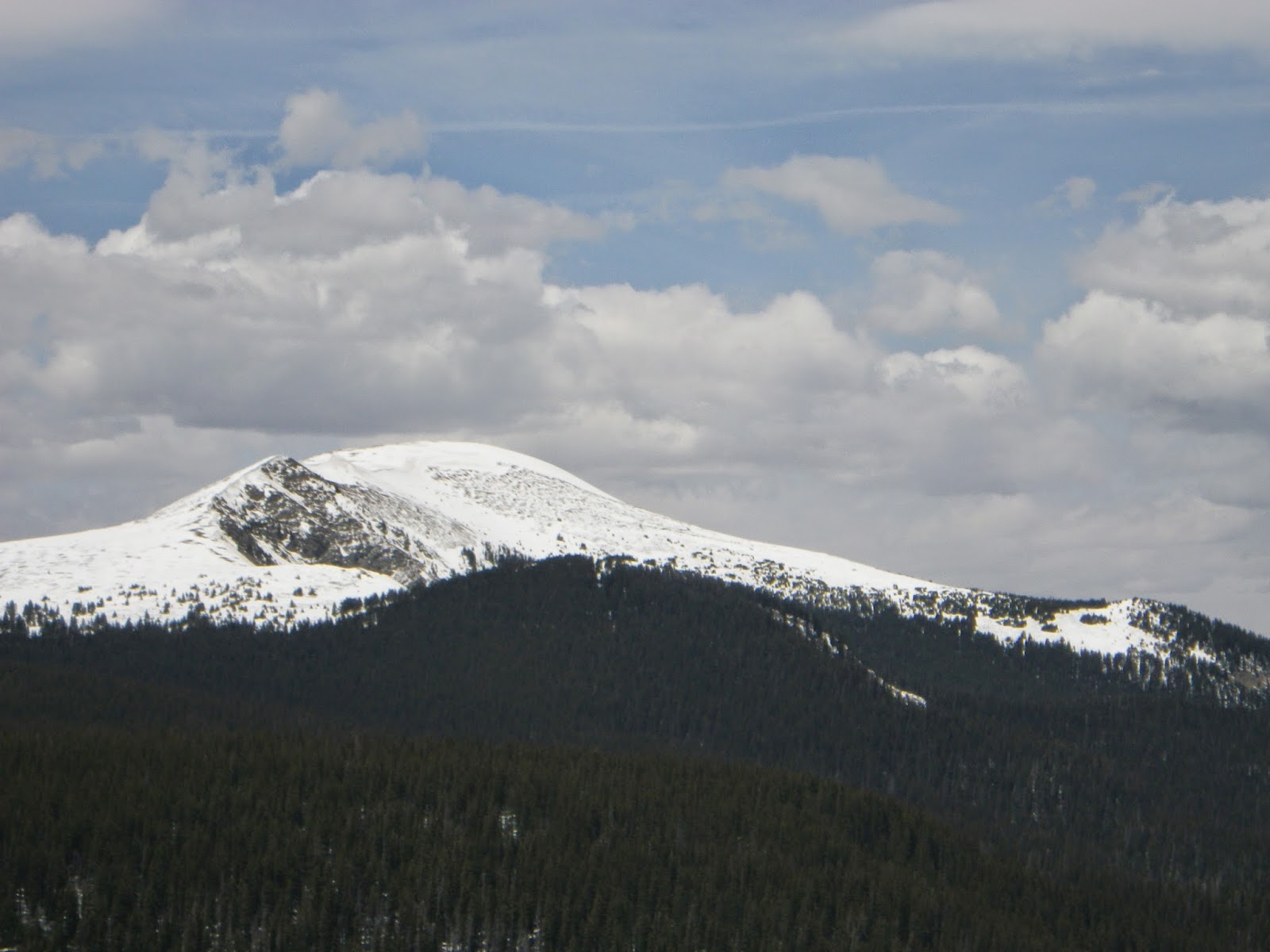 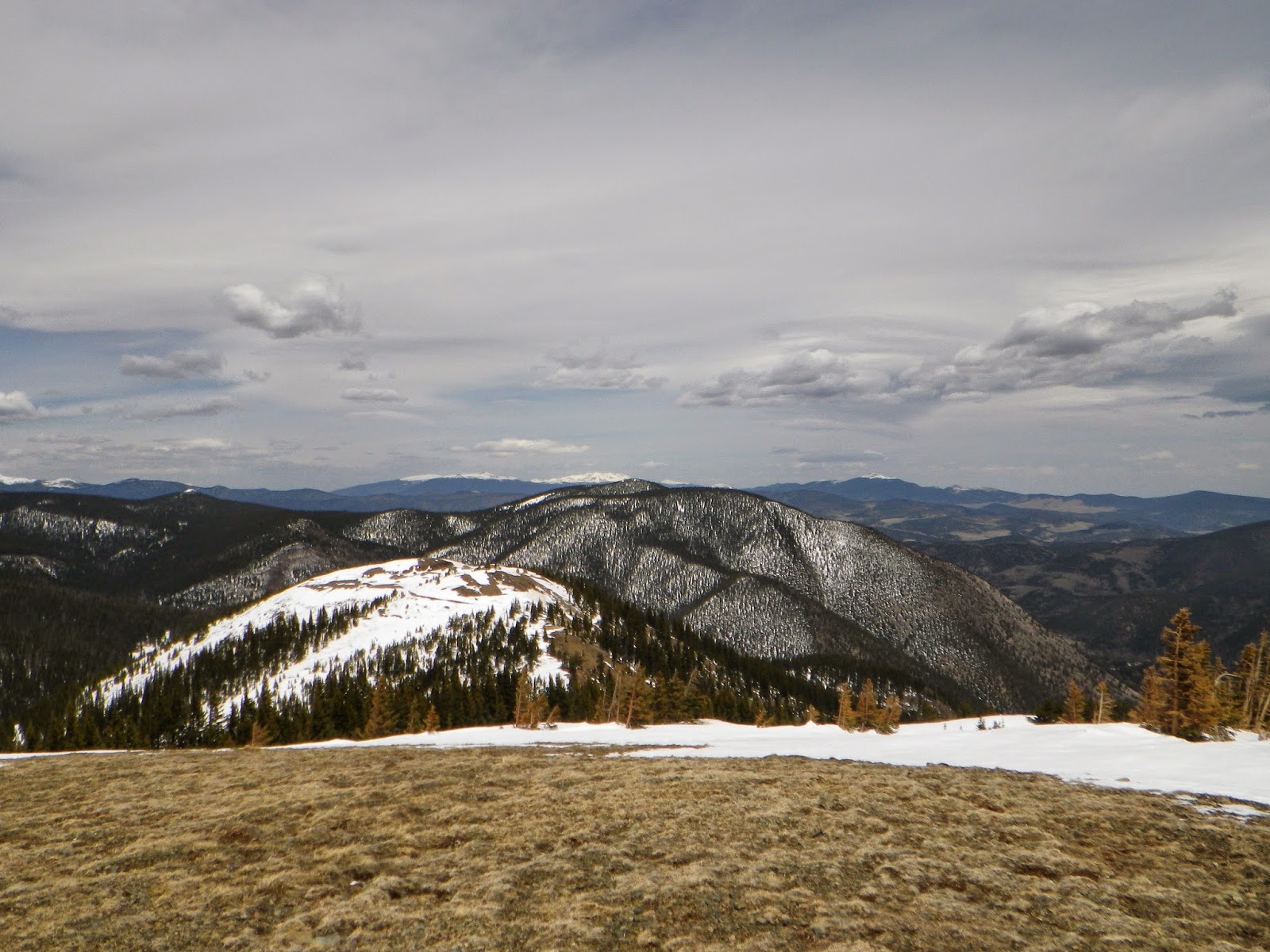 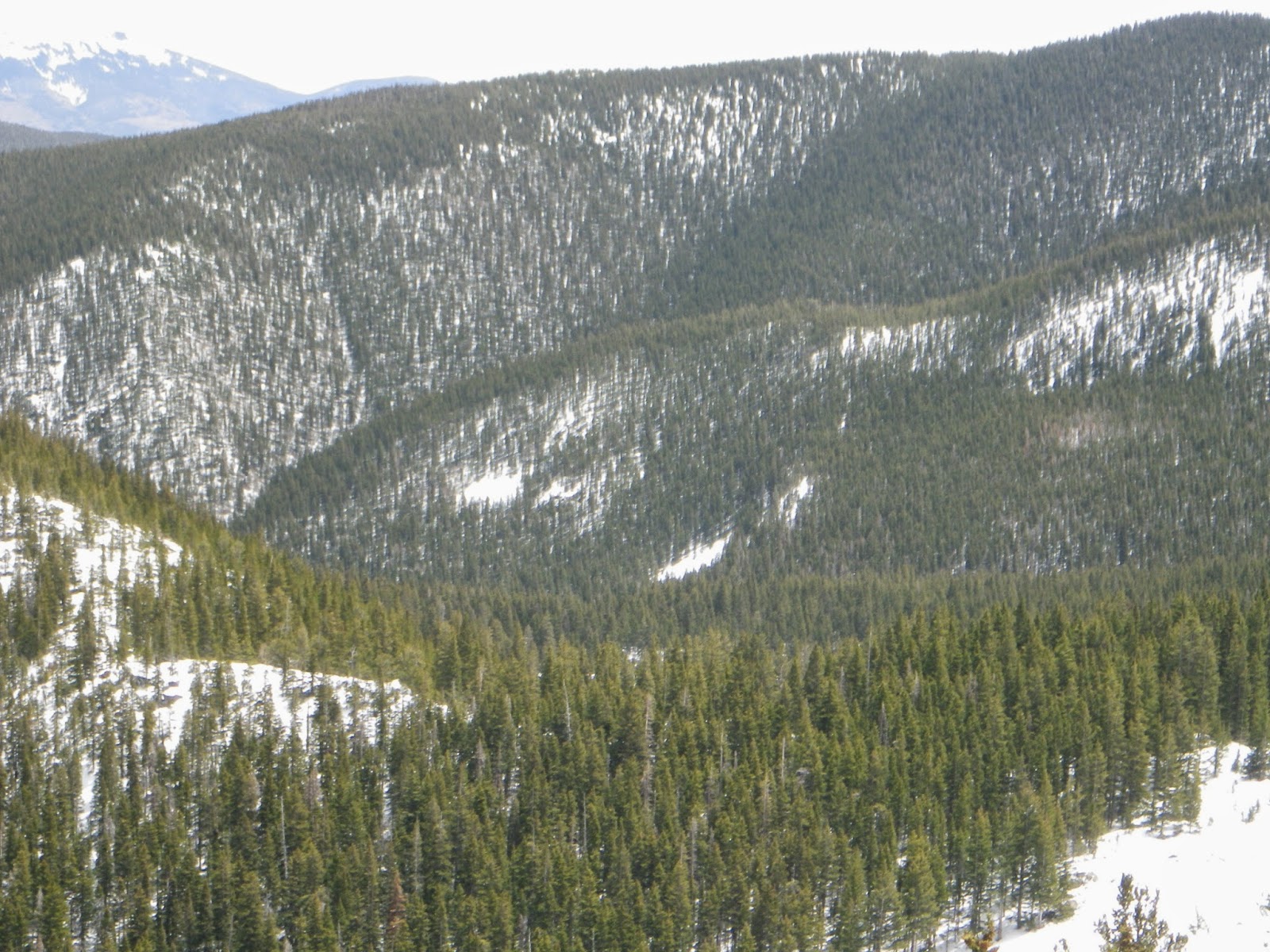 In fact the tallest in New Mexico, these dramatic mountains guard the southernmost extent of the Rockies. What an awesome view and of feeling of being in an awesome place. Quickly we left due to the cold and a large storm cloud brewing. The five mile descent was wet and slushy and my shoes became soaked through. Strangely, we never met the man whose footprints led us up there. In fact, after we made our summit those prints seemed to disappear. I noticed none climbing further up Wheeler, and we saw just ours on the way down. We wondered what happened to this mysterious person, perhaps we were following a ghost, or maybe there were never any footprints to begin with... 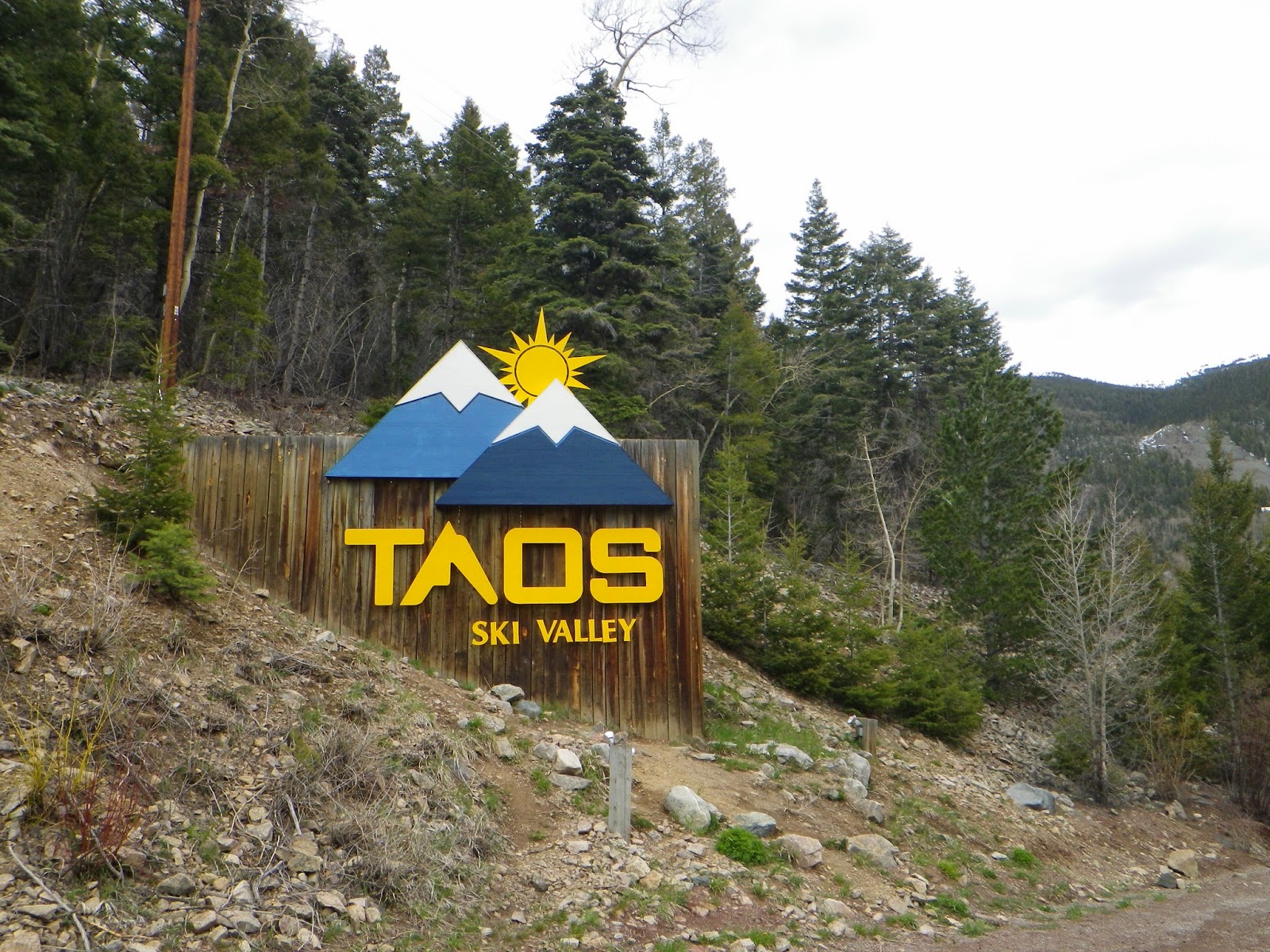 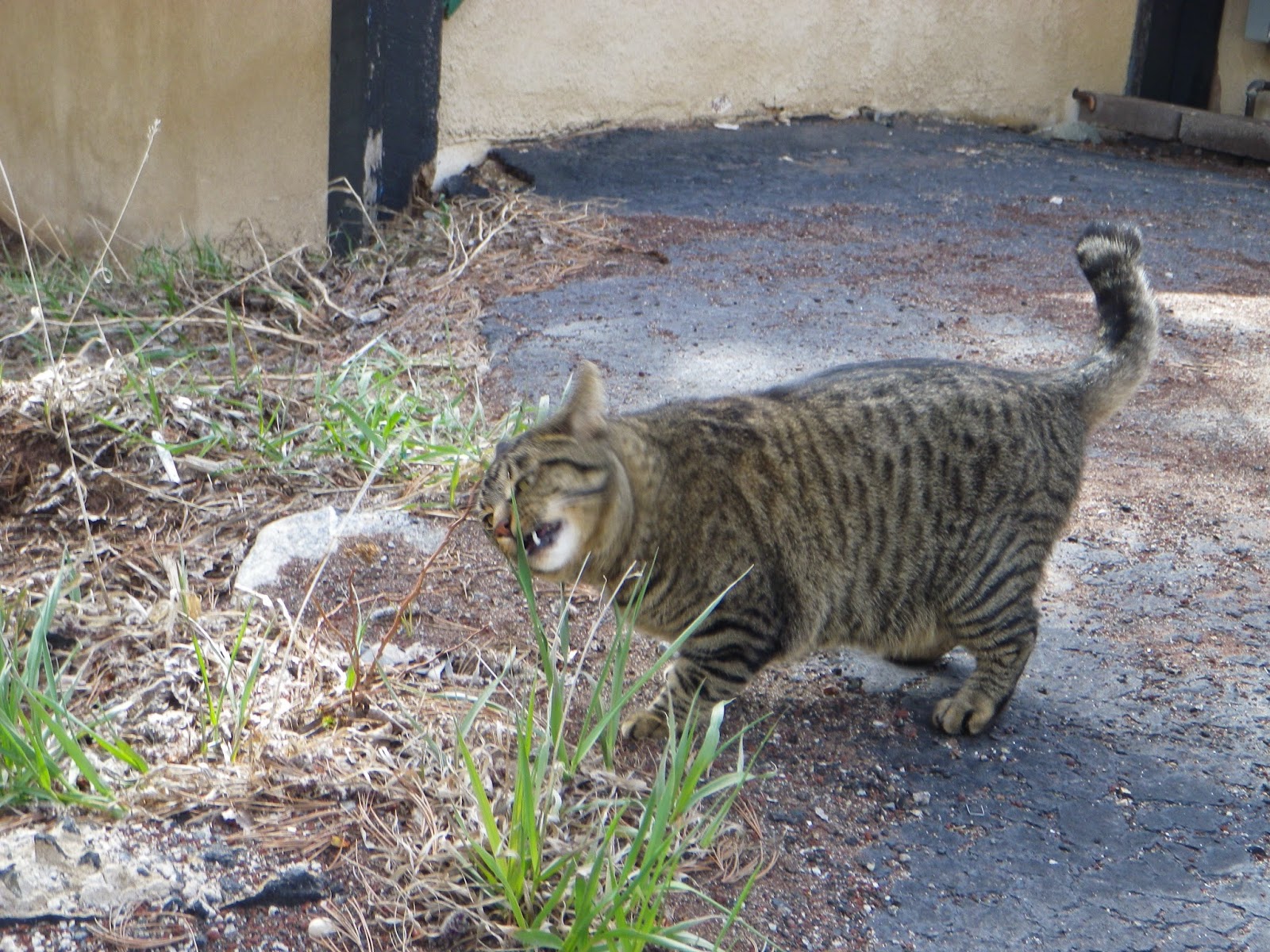 So then we made our way to Baskin Robbins feeling very accomplished. We wandered Taos on a mission for some public showers which we found. Then we had the most peculiar night:

The sun set on us while we were still in town which is bad, I try to find my camp spot before dark. But no matter, the National Forest is huge, there will certainly be many spots. Not as easy as I hoped. We drove into the dark woods down a highway and both became tense. I couldn't find dirt roads, just rich peoples houses and I got fed up with driving so far out of our way once we had gone 20 miles through the dark.

Finally we turned on NF Road 437, another bumpy dirt road through the clean cool forest. But there were no pull outs on the road, it was climbing a mountain and there was a cliff on one side. We drove and drove, deeper in, further we went. According to my GPS the road went far into the woods to connect with this huge network of dirt roads, stretching at least 100 miles through the Carson National Forest. The same area we camped last night. We drove about 40 minutes and at some point we were both upset with how committed we were to this awful road. To turn around would be to guarantee another hour of driving at least and it was already 10 o'clock, but to keep going there was bound to be a pull out somewhere.

At long last, at 9500 feet, we found our spot. It wasn't ideal but it was level, so it would do. I had to sit and calm myself because I was very worked up by this point. We begin enjoying ourselves again and laid down for bed. We found we couldn't sleep. We laid and chatted for awhile and right on the verge of sleep, the car shifted ever so slightly. Hmm... I pondered, and checked. It wasn't in gear, oops, so I put it in first.

Maggie was slightly uneasy, she didn't like the spot. She was afraid of the dark and felt the same way about the spot last night. I assured her there was nothing to fear.

Then strangely enough, I too found my mind wandering to dark places as I laid to rest again. As I was going to sleep I pictured a presence. I imagine if some very creepy man was just lurking. Just standing there like a horror movie out side the truck and if I was to pull the curtain down I'd see him staring in. Just staring, calmly stalking us.

Then suddenly the curtain fell down of its own volition and Maggie jumped and shrieked. My heart stopped and a chill went through my body. "Maggie, you fuckin' scared me!" She had envisioned the same thing as me, a man or something standing outside the truck. To hear that made me feel absolutely horrible, to think we could possibly be sharing that waking nightmare. To think that could possibly be real, although I knew it was irrational, made both our eyes water with tears.

So we left and drove out of that cursed forest in the Sangre de Cristos (or blood of Christ.) She had felt similar feelings of bad omens in the forest the night before. I never have left a spot like that in the middle of the night. We truly felt under attack.

So we drove. We called my dad and he talked us down with religion. Taos is a strange town, we couldn't really place it. Its beautiful but it has this dark energy. Maybe it's to do with witchcraft of some kind, the Land of Enchantment...

This was last night at 1 a.m., we left Taos with no need to return. We talked about deep insecurities. The Rio Grande gorge cuts a huge split in the otherwise flat and empty plains here. A mysterious rift in the earth, there's a bridge that crosses it. We decided to drive across that bridge and leave this incident and as many of our problems as we can on the other side of the Rio Grande. We parked at a rest stop on the Western lip of the gorge and was serenaded by a Mockingbird, a guardian angel, until we fell asleep. 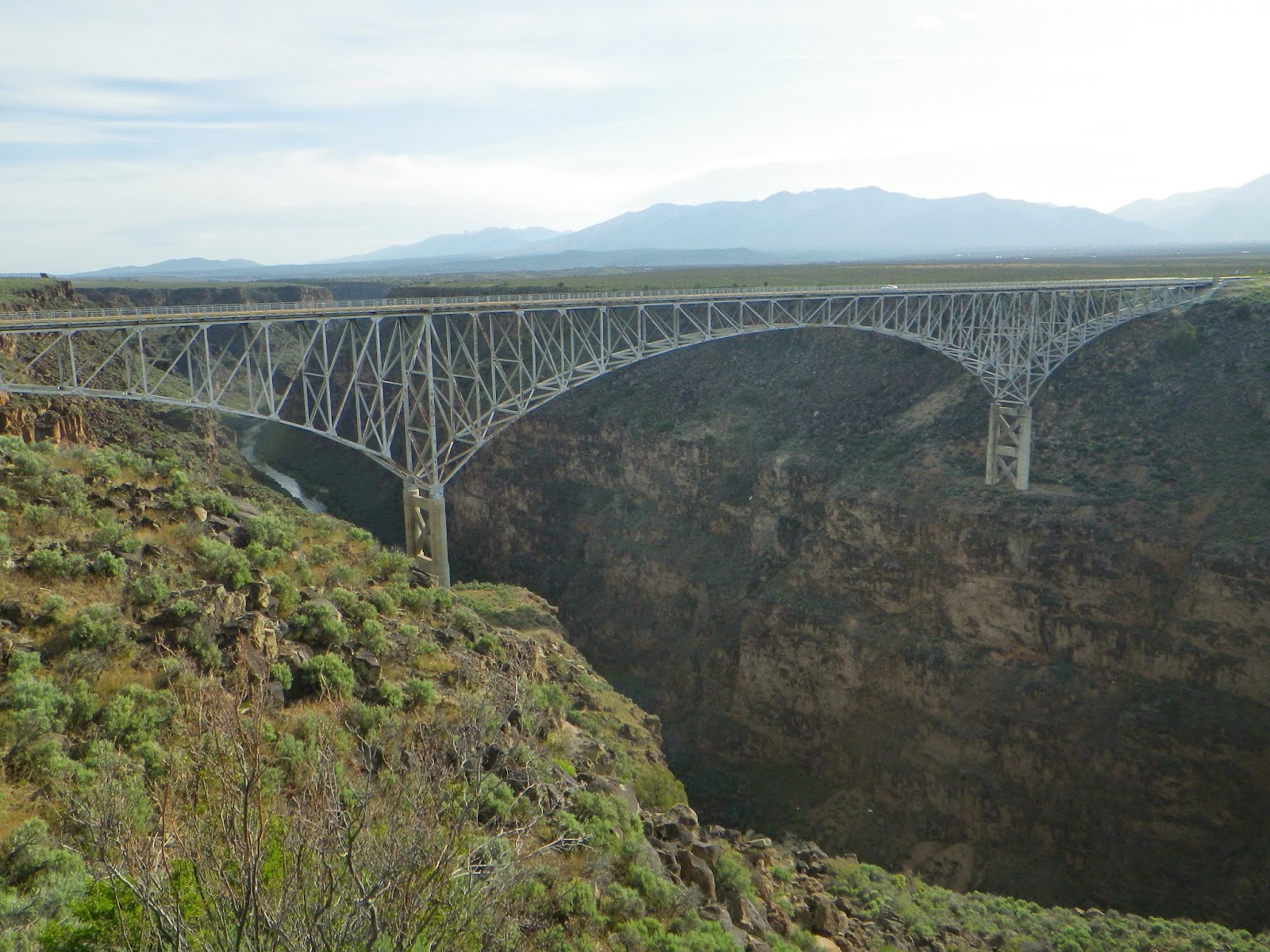