We woke up that morning ready for an adventure. It was detour day! How are we gonna get to Ashland?

We walked the long road from our camp and went to begin hitching from the general store. We decided to just sit around and eat ice cream and make friends to find a ride instead of sticking out our thumbs. I went around talking to everyone, being friendly and telling our story often. Soon enough we were offered a ride by a nice married couple. They were on a road trip from Glenwood Springs Colorado to visit their daughter in Oregon and then see the Redwoods. We visited and drove for an hour and a half to the city of Medford, Oregon. They dropped us off at a starbucks, the first time we'd seen one since the city of Chelan on July 5th in north eastern Washington. The first time we've been in a town with a big grocery store since then. We found we were lost in the grocery store, unable to decide what to buy, what we wanted to carry in our packs. So all we bought was a pint of salted caramel Hagendaaz gelato and quickly finished it. Then a huge amount of nasty chinese food we were unable to polish off.

From Medford we plan to catch the bus to Ashland and get a hotel room. Ashland is a town very near the PCT the last section between oregon and northern california. Someone overheard us talking, came up to us, and offered us a ride to Ashland! So nice! So off we went in a different car. Everything started to look like northern california, big step dusty hills. Ashland was a really cool town, its very nice, very trendy but I still like it. We got fro yo that was the best.

So we got our hotel room and really relaxed! Got clean and comfy. We learned there about another fire closure on ahead.Grr... I wanted to see the sign that said Oregon/California. We could still see that then get to Seiad Valley, take a bus to Yreka, hitch to Carter Meadow and then continue on to Castella as planned. I was looking forward to seeing the trinity alps of Northern California.

It wasn't until the morning, we sat outside the post office and discussed our plan. We decided we wanted not to skip the Sierras in California, we would instead need to skip a segment of Northern California. We would probably skip the Lassen area to get to the high Sierras earlier in the season and give ourselves a better chance to not get snowed out. I was writing out an email to Maggie's mom, creating a time frame for what dates we'd be in which town. I then wrote Bishop ETA October 9th. Hmm...that date prompted me to google "October in the high Sierras." This well written paragraph really hit me good,

"I don't see High Sierra in October as pleasant even on fair weather days. And November is much less so. Days are short, nights tentbound are long and chilly. Every morning ice forms on brown turf and many northern exposures are shadowy all day with remnant white snow dustings from the last early front passing. The sun is at a much lower angle even at noon so it doesn't warm up that much. Smaller streams show dried watercourses often leaving long trail stretches without water. Permanent streams are at their annual minimum flows with ice crinkling and breaking during morning along any shady bank edges. Vegetation is all dried and drab brown leaving evergreen pines and firs the only green. High country terrestrial insects have all long since hatched, lived, reproduced, and died so most birds have left for warmer climes leaving an eerie silence about vast distances. Even rodents stay in their burrows nibbling unseen on their summer larder. Deer have left the high country to eat berries at mid forest elevations. Trout readily gobble any underwater object that wiggles while ignoring the lifeless lake surfaces. Experienced backpackers and climbers are scarce too while a few novices ramble up trails proclaiming how great it is that they are alone even on popular trails. Clear skies give way to growing afternoon clouds. In the evening stars appear then later ominously disappear with a whine in whitebark pines growing each hour. One awakes in the we hours and a new sound is tinkling on one's tent. One contemplates on being really alone and why this is so."

So Maggie and I sat on the ground at the post office and discussed. "How could we get to the Sierras earlier?" Maggie asked. "Well," I thought, "the earliest we can get there would be like tomorrow, couldn't get there sooner than that!" We thought about it. If we somehow did that, we could be in Bishop in mid september. We were in a real town with a good bus  system. We played around with the idea. "We'd have to go straight to Sacramento and from there to Sierra city or to Truckee." We googled it. There was apparently this train that left left Klamath Falls Oregon at 10 p.m. And arrived in Sacramento at 6:15 am. An overnight train, "the Coast Starlight", it ran from Seattle to Los Angeles. "Then we'd be in Sacramento at 6 a.m. and have all day to get to Truckee, plus it would take care of a place to sleep tonight!" It was 80 dollars each.

So we sat there on the ground at the post office tensely staring at our phones. "Either we do this or we go hitch to the PCT and hike into the Trinities as planned." "Should we do it?" "No that's crazy we should keep going as planned." It was a spontaneous change of plans, it felt impulsive. We would miss the Oregon/California sign... "The Sierras would be better in September." "Let's do it." "Yeah I do it." So Maggie bought the train tickets.

After one more confused shopping trip we were on a bus to Klamath Falls. We went back through Medford, an hour back past the same turn off for Crater Lake and continued east. Before we knew it we were sitting in an industrial area cooking dinner outside the train station on the ground. We talked to a bunch of crazy people while we waited for the train. It didn't show up until 1130. We got on. The night was warm and the lights from Klamath Falls twinkled on the hillsides. We laid back in our seats, the second floor of a double decker, the seat extremely comfortable and the lights dim. Then silently the train left. We watch the lights of the dark world outside serenely slip away and we were quickly lulled asleep.

I woke up many times but then it was sunrise. Orange and pink over the flat Sacramento valley of California. Where were we? There were palm trees outside. Then we were 20 minutes from the city, the capital of the empire. There were descheveled trailer parks. There was garbage in the streets and piles of it under the underpasses and in the ditches. We saw dogs and people sleeping in the garbage. We got out in the sad city, a new morning and figured out our next step. We certainly didn't want to be in Sacramento for long. It felt weird being there, wandering the streets in the early morning. Nobody had told us to go there, we had no purpose there. Just passing through. 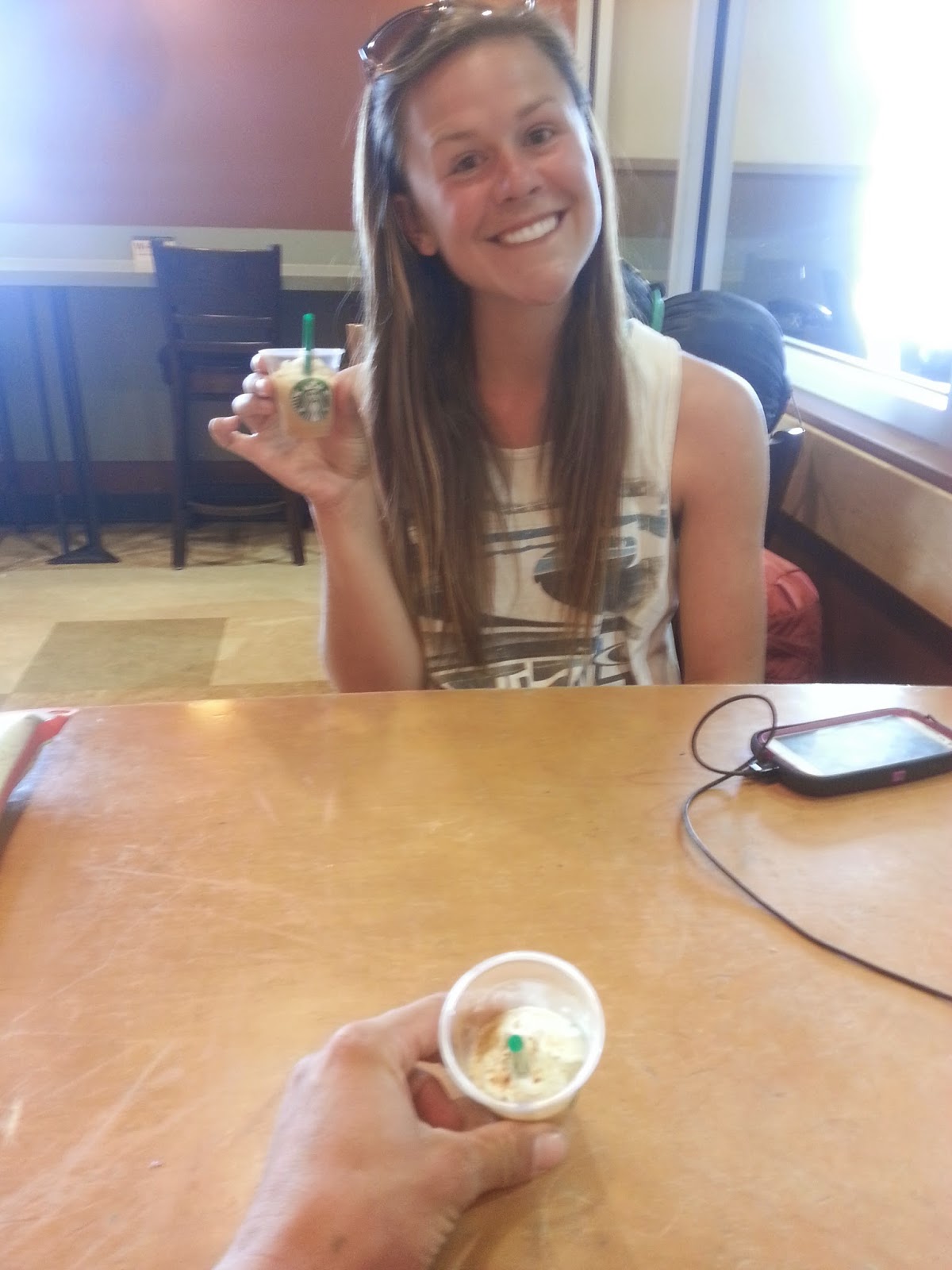 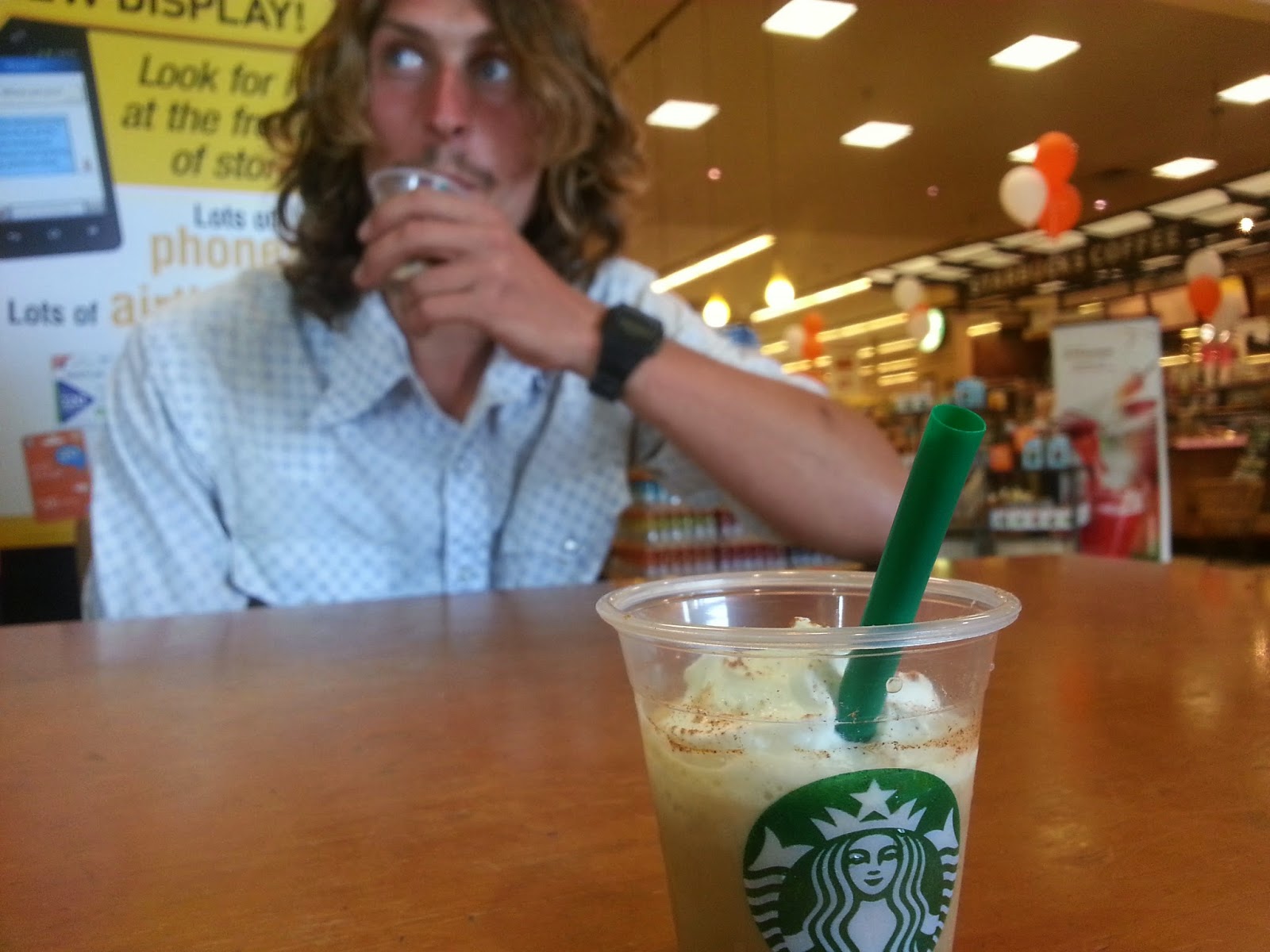 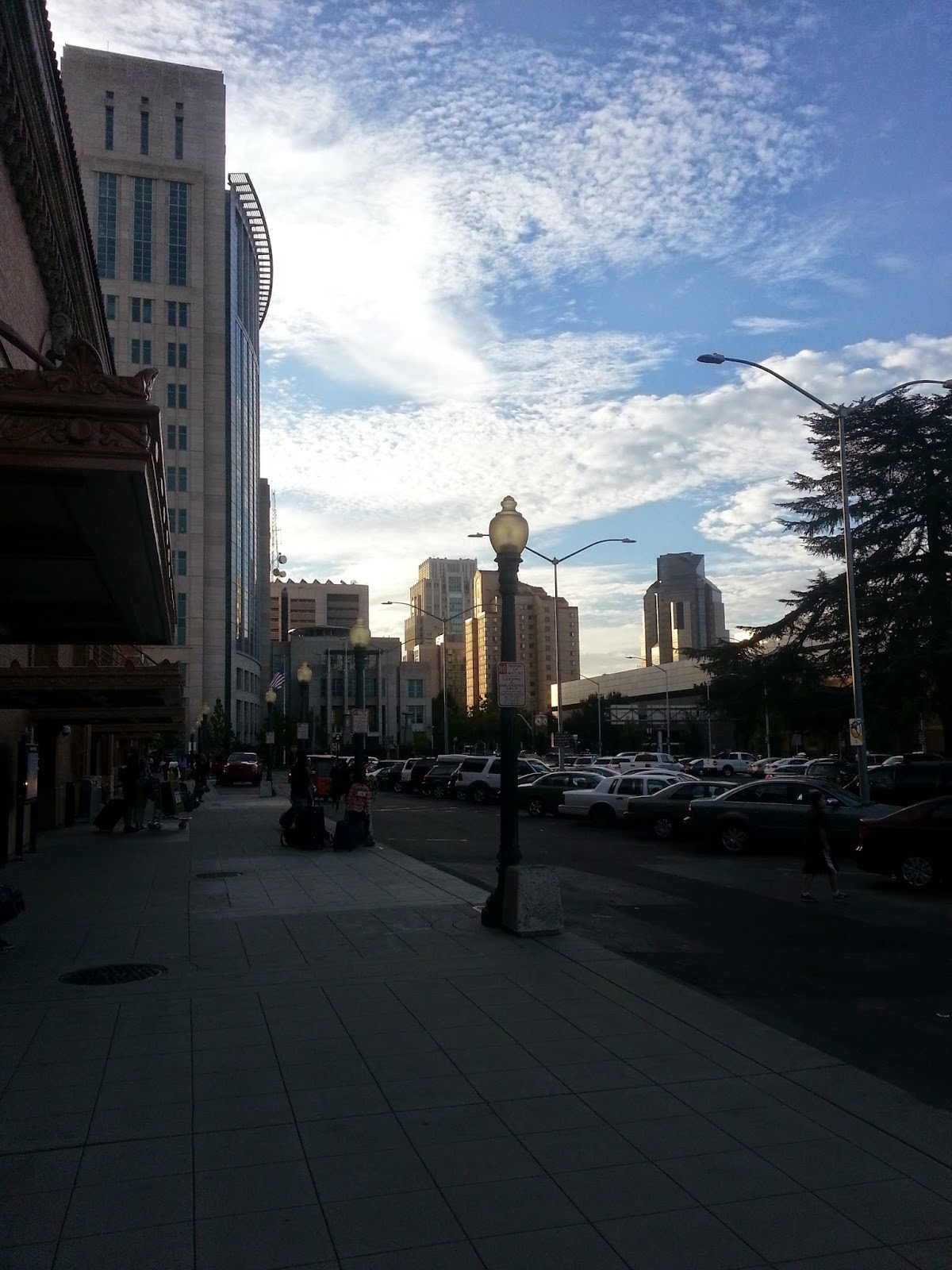 We walked a mile through an industrial neighborhood, passed a high rise prison and to a greyhound station. 100 bucks later we had a bus ticket to Truckee, and off we went again. The bus took us past flowers, mahogany, eucalyptus and palm trees of a warmer climate and eventually to a dry forest and then we saw the sierras. Truckee was in a beautiful spot in the mountains. A little upscale tourist town, we sat down there for lunch at a mexican place. "Wow we're actually here." We were very dazed in Truckee but had a lot of work to do. We had to go to the grocery store and a backpacking store and then get 15 miles up the mountain to the PCT. We just wanted to lay down having slept very poorly on that train. 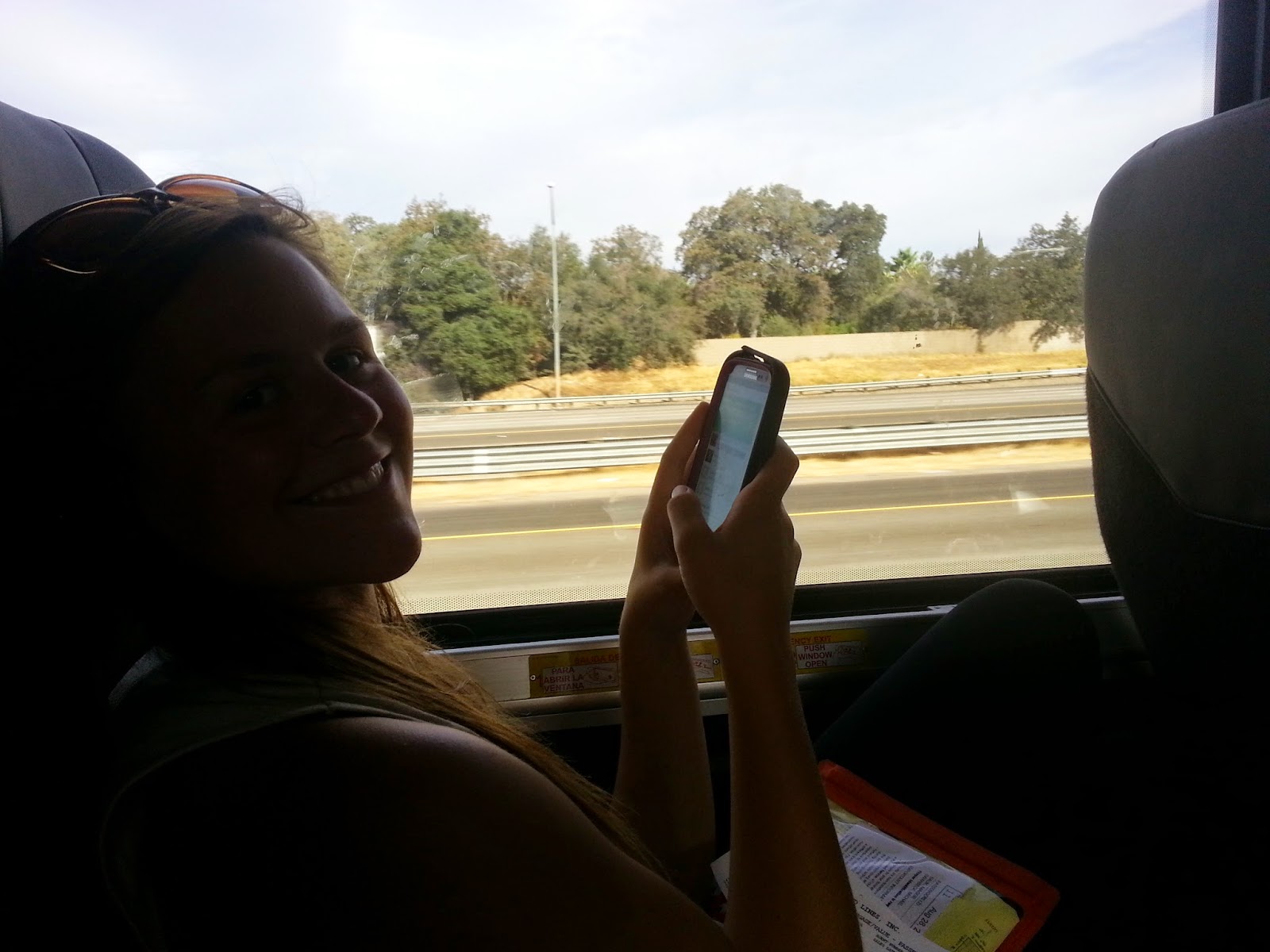 Eventually we were on the side of the road sticking our thumbs out with our big smiles on. It took about 15 minutes for somebody to pick us up. They had to drive us out of their way up the mountain, it was very kind. There we were at Donner Pass. Like a time warp we zipped right from Crater Lake to the foot of the Sierras in 3 days. We missed some scenery in Northern California, that's a shame but I don't regret it. this was the right thing to do. We lived in the Sierras, we know these towns. Bridgeport and Lee Vining, Bishop and Lone Pine of course! We don't want to give up our chance to hike here. In the morning we tackled the new terrain. Much steeper, more up and down. Now we see real mountains. Granite slabs everywhere, very dry. Wow and it's August 30th! We're gonna do the Sierras! It was such an exciting day. 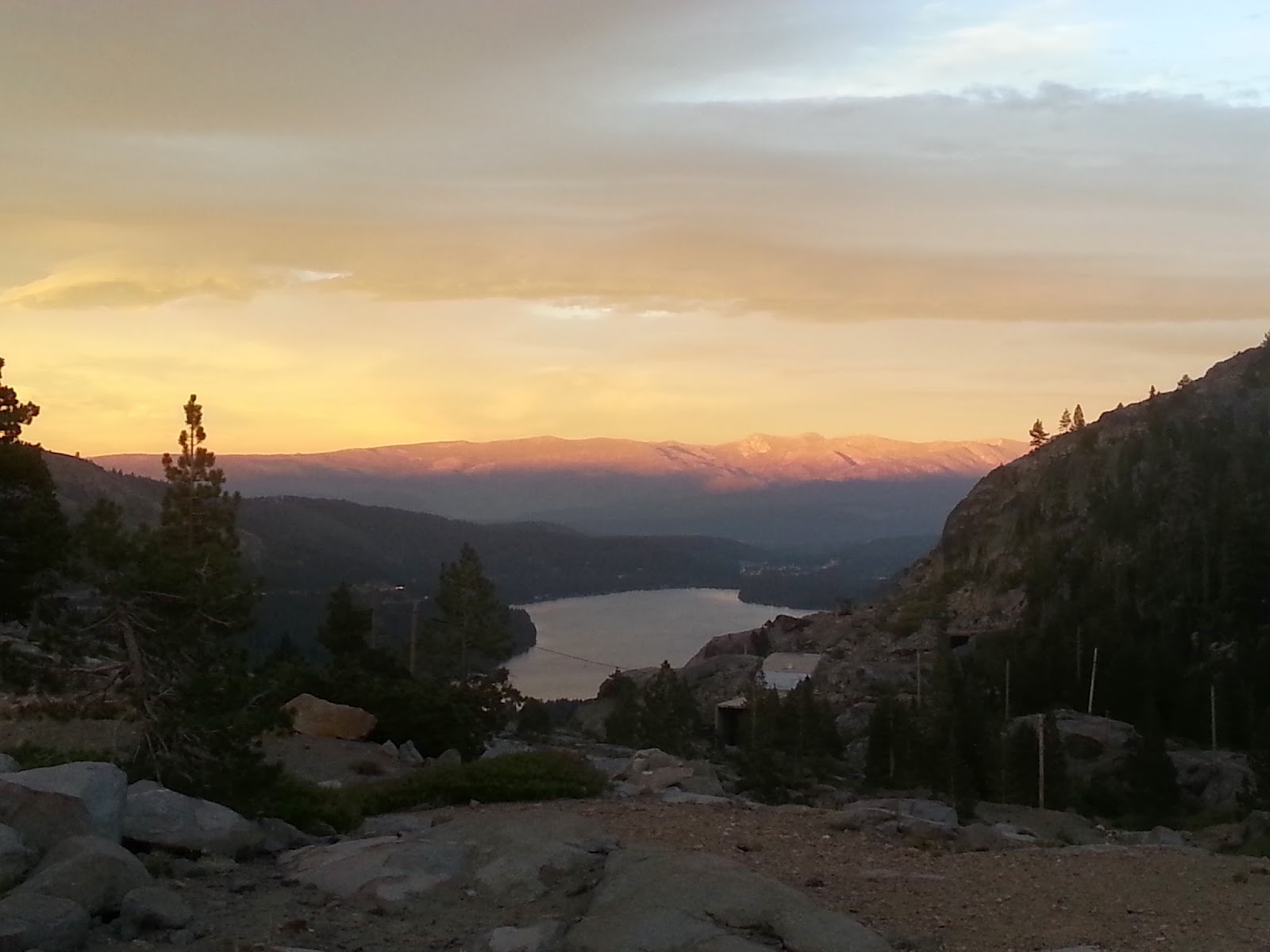 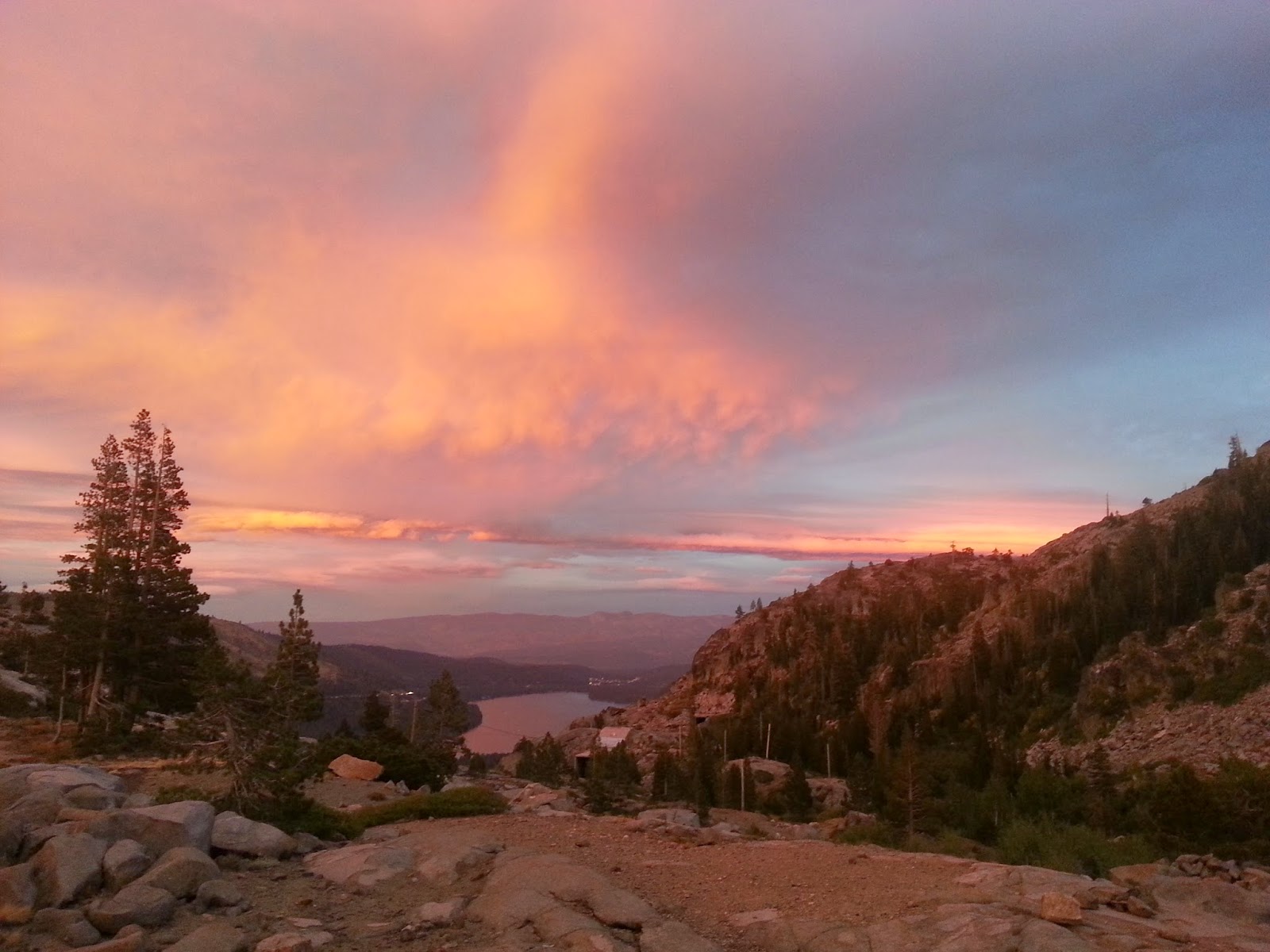 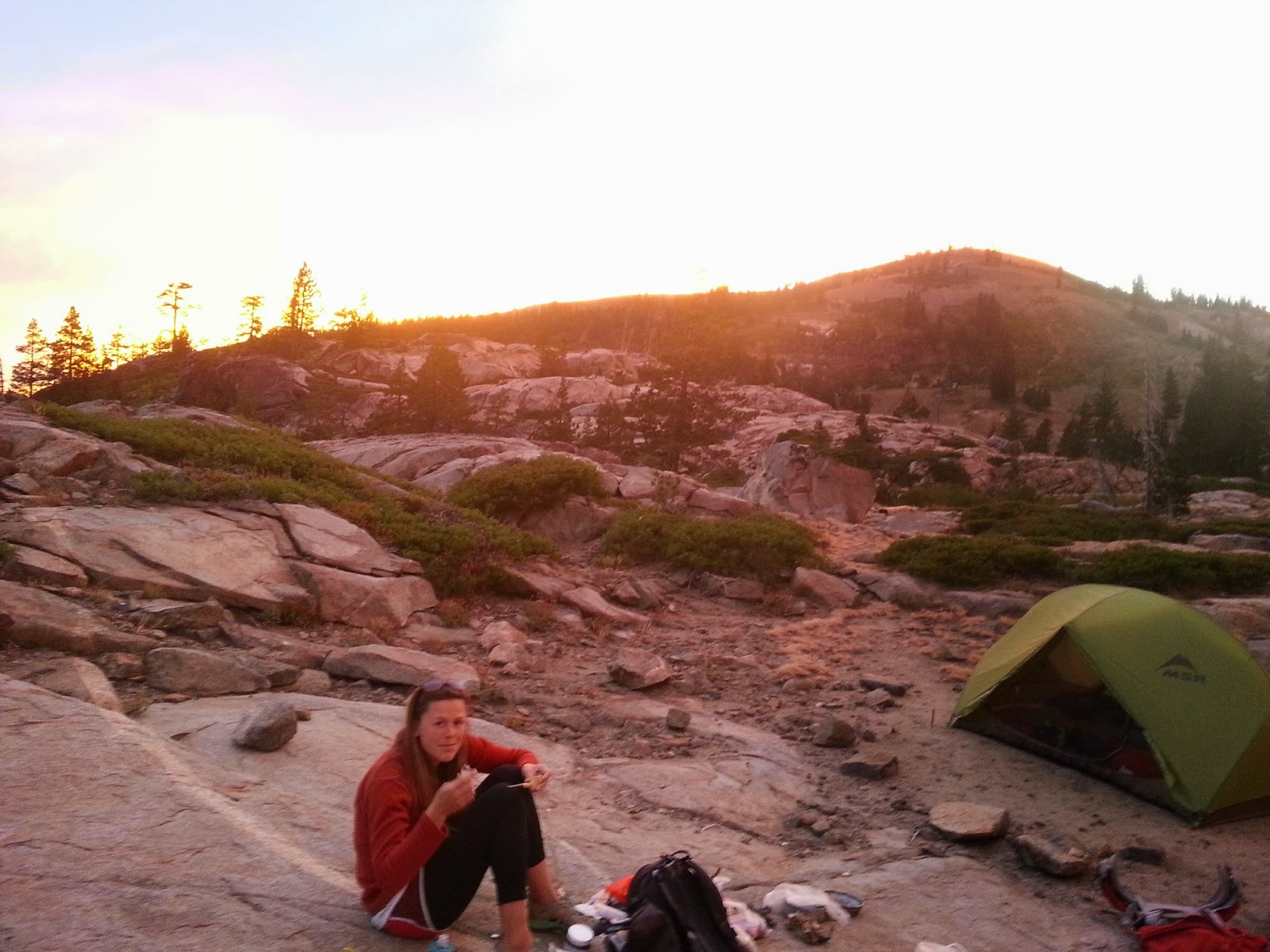 We soon found ourselves traversing high on a ridge, unaccustomed to the elevation of 8000+ feet. 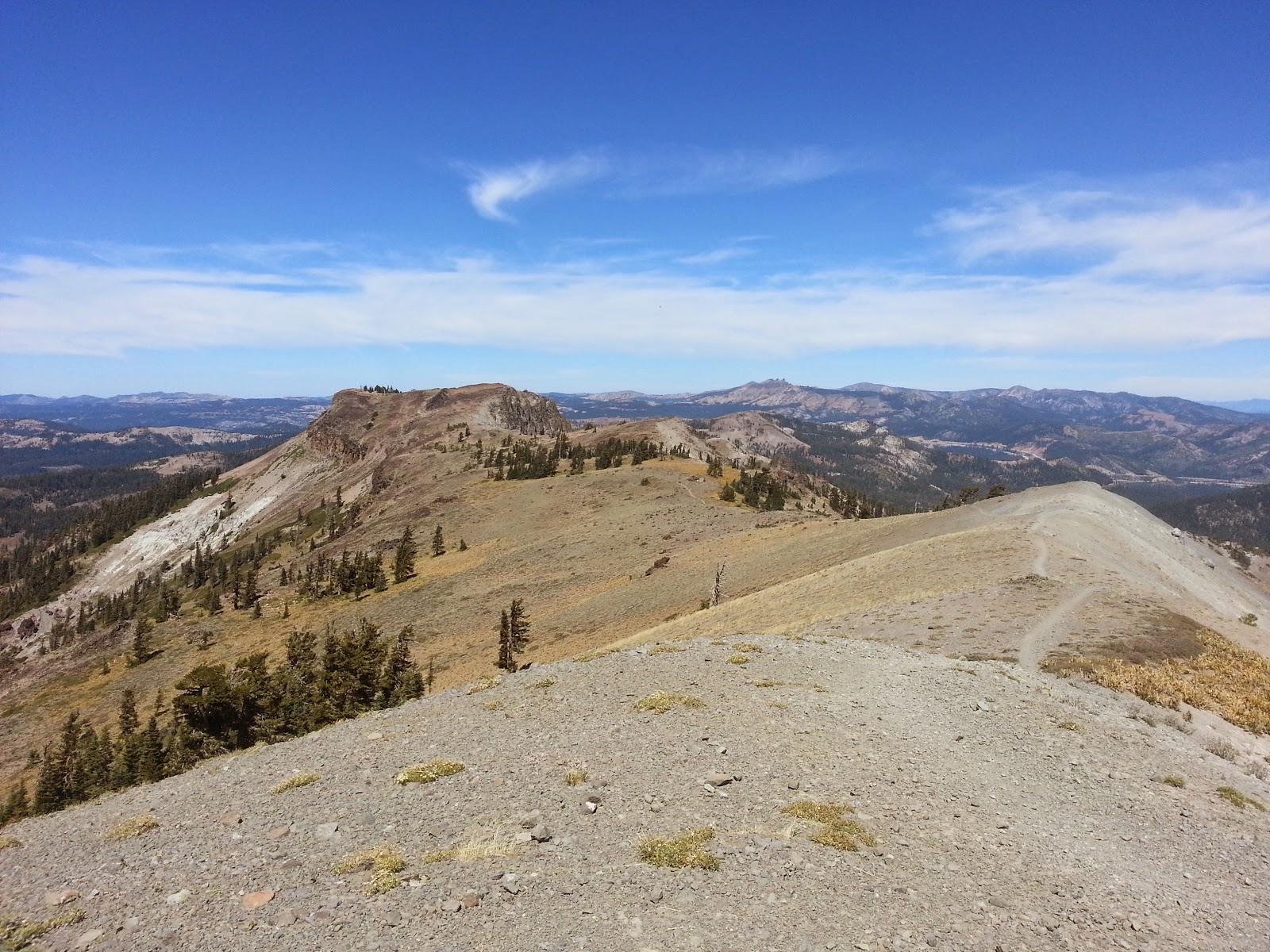 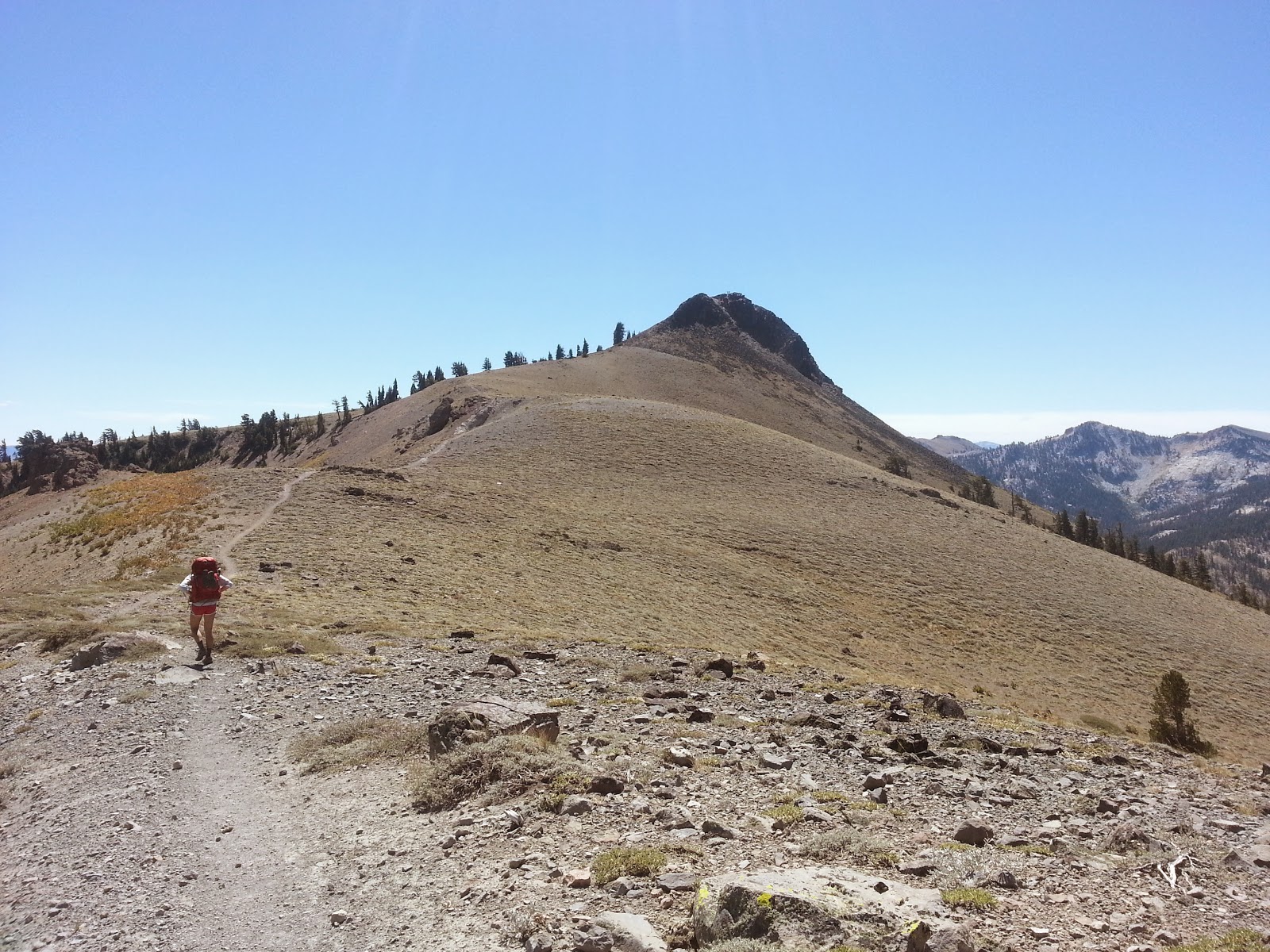 The hills are alive with the sound of music! 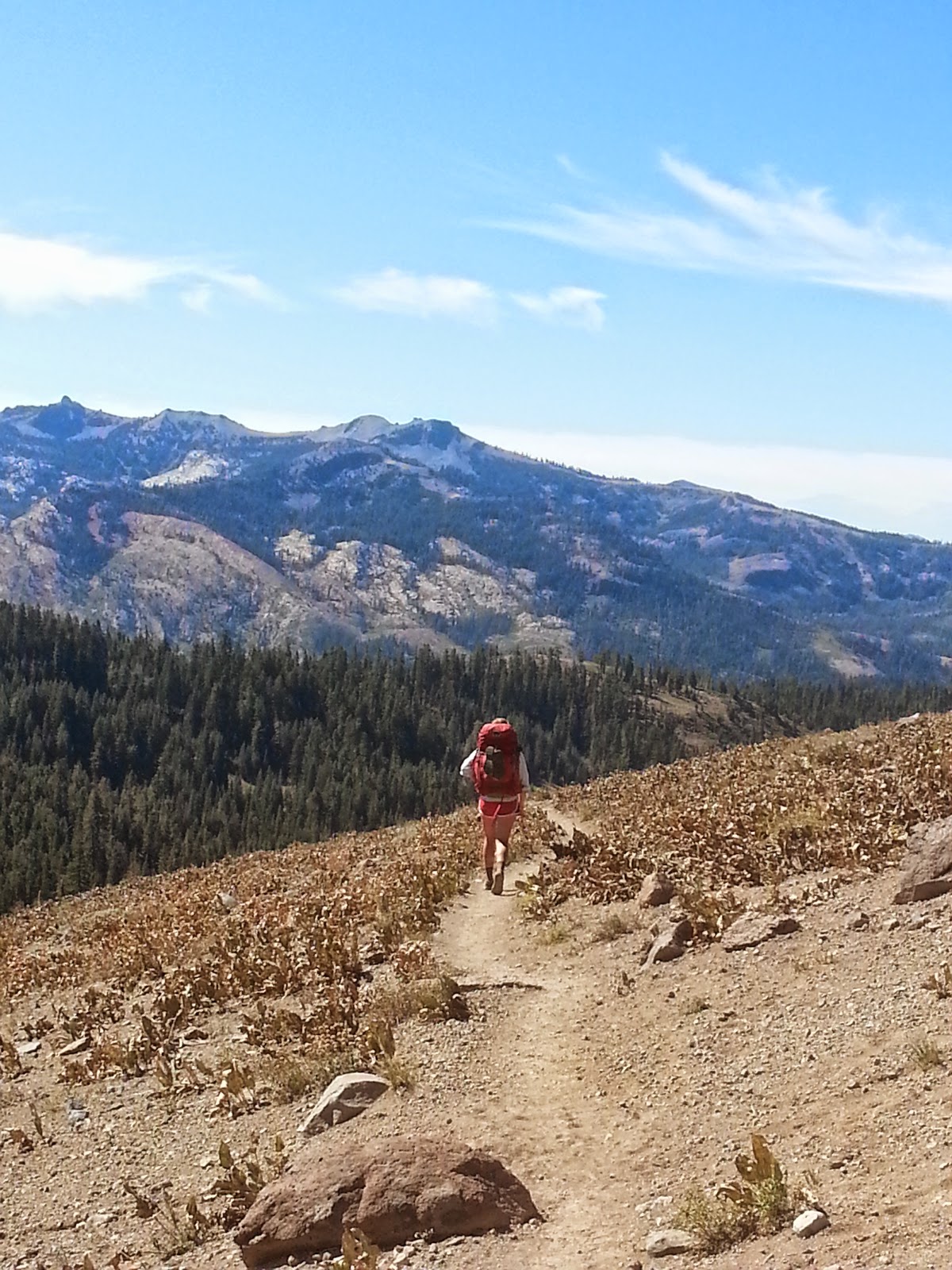 That's what the scenery looked like, breathtaking! This is the northern edge of the granite glaciated Sierra Nevada range, the southern edge is far away. Now the next phase of our trip begins. We couldn't be happier to be back in Eastern California and to have this glory still ahead! 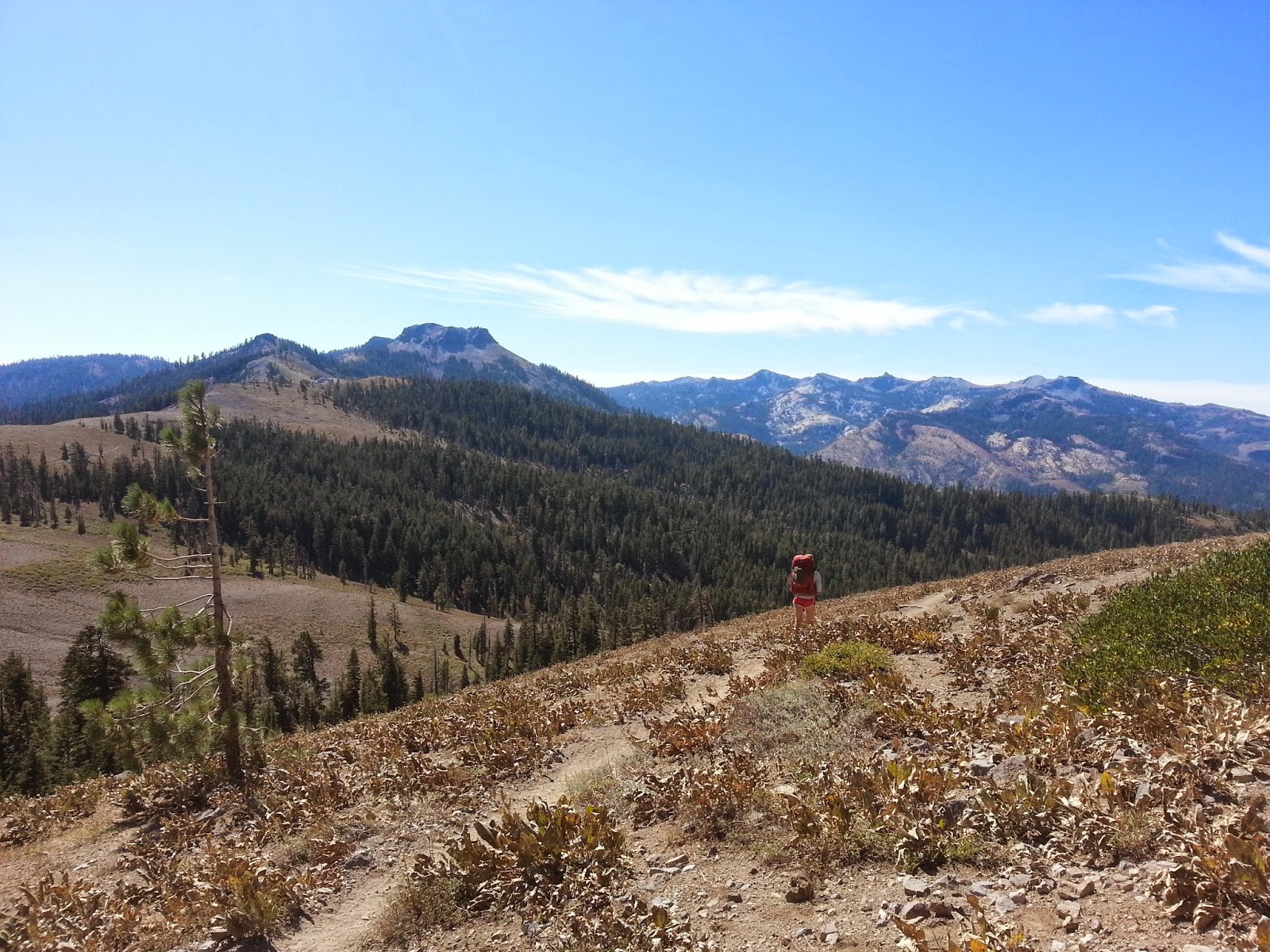 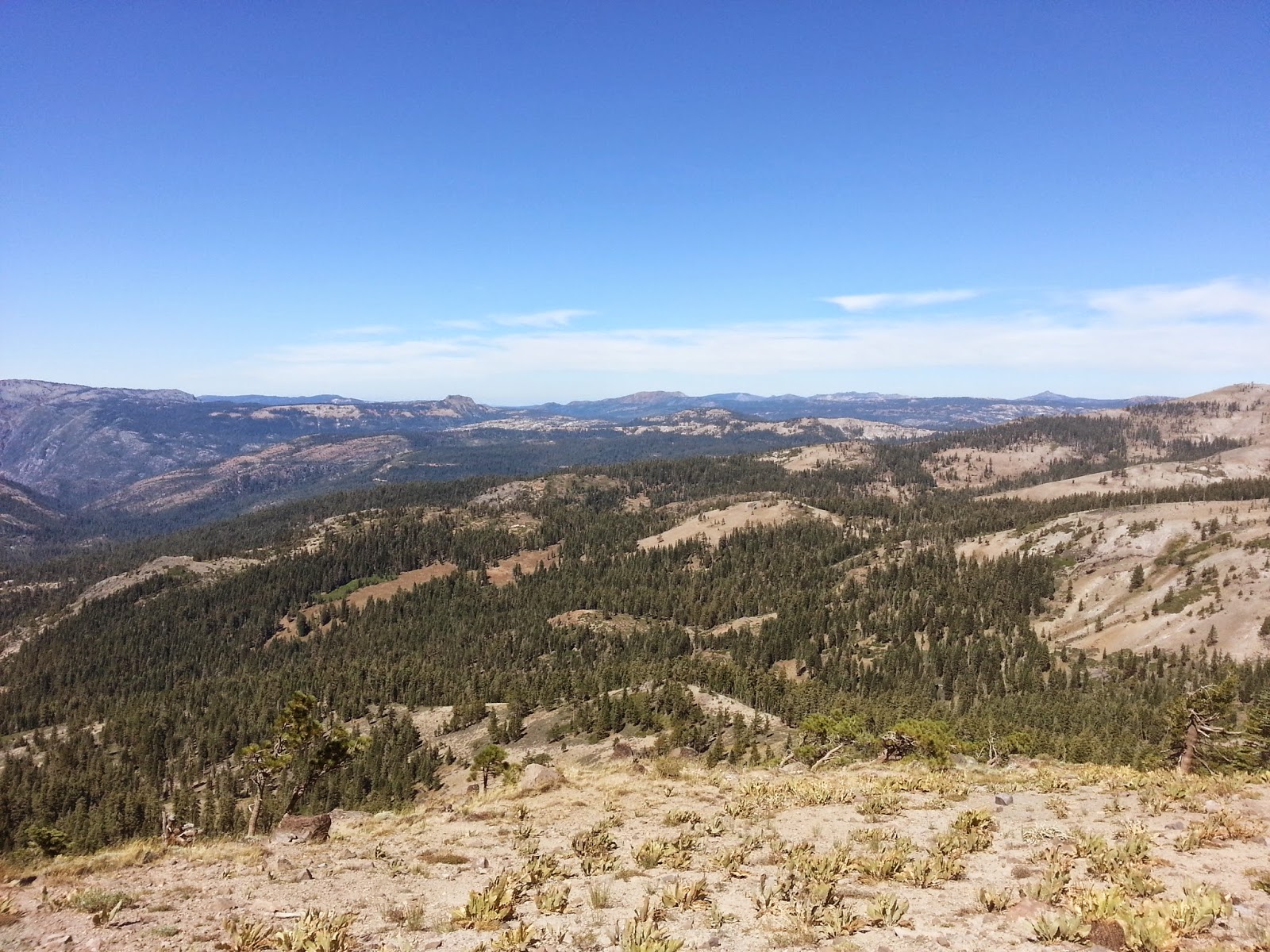 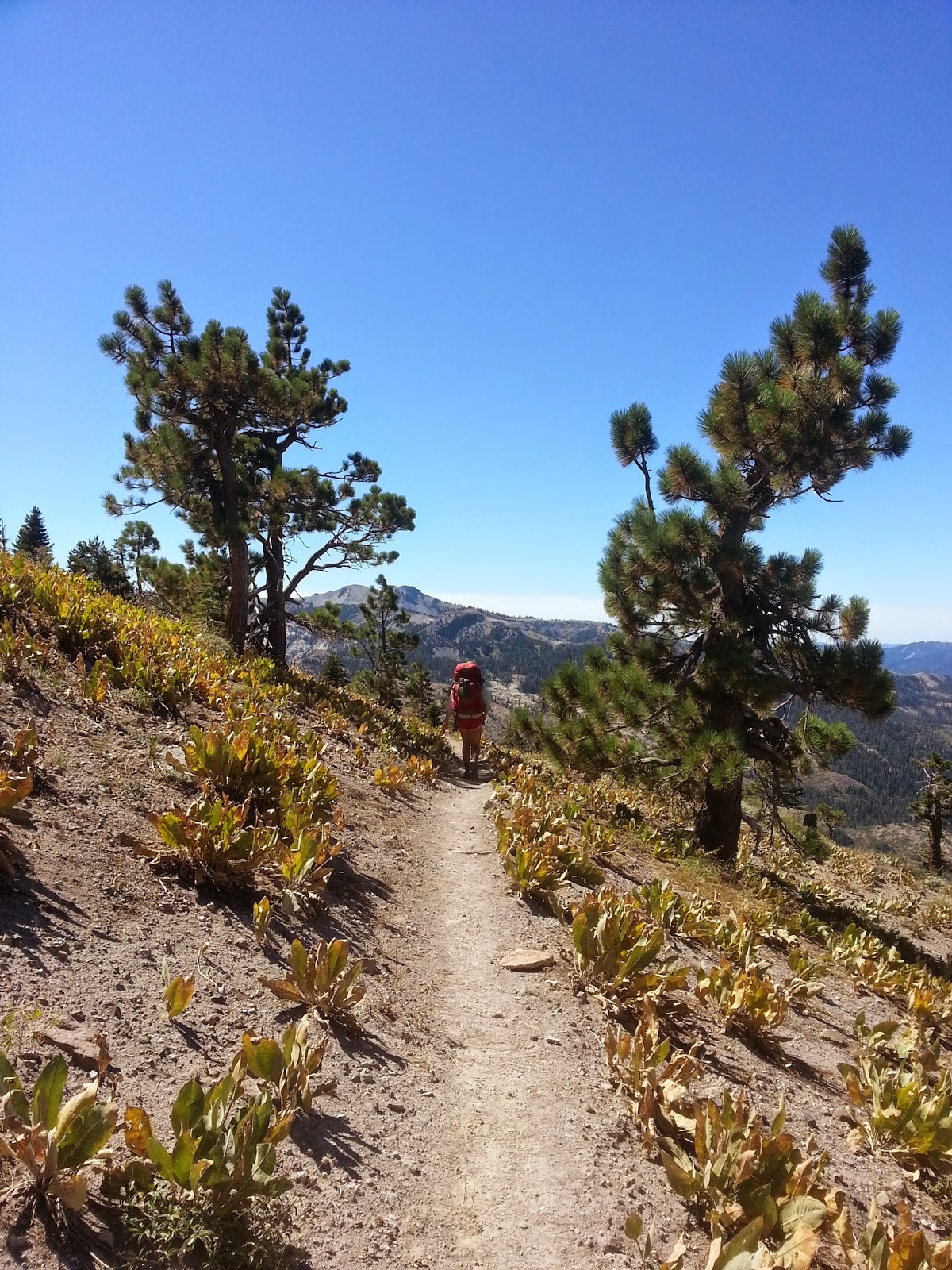 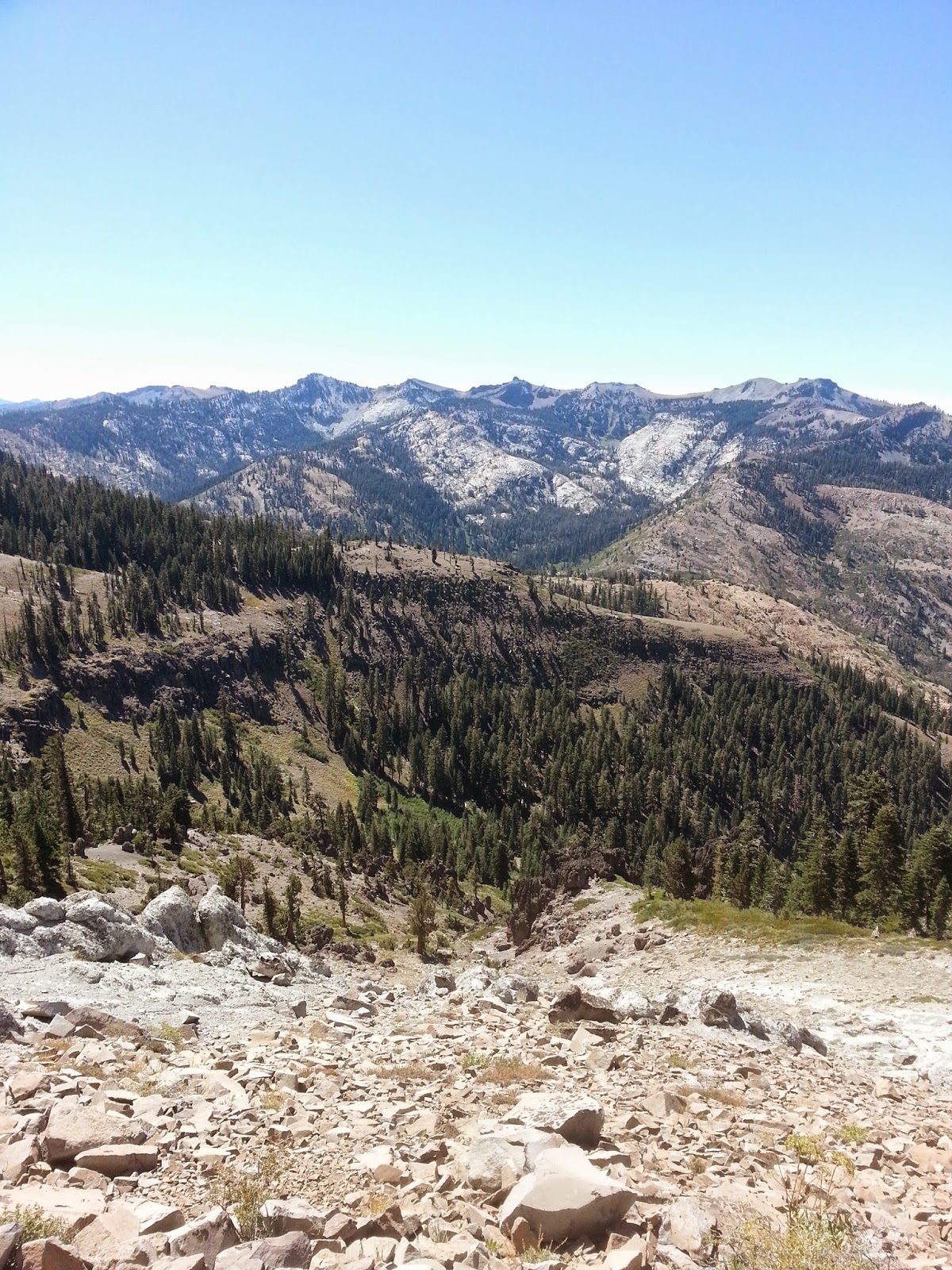 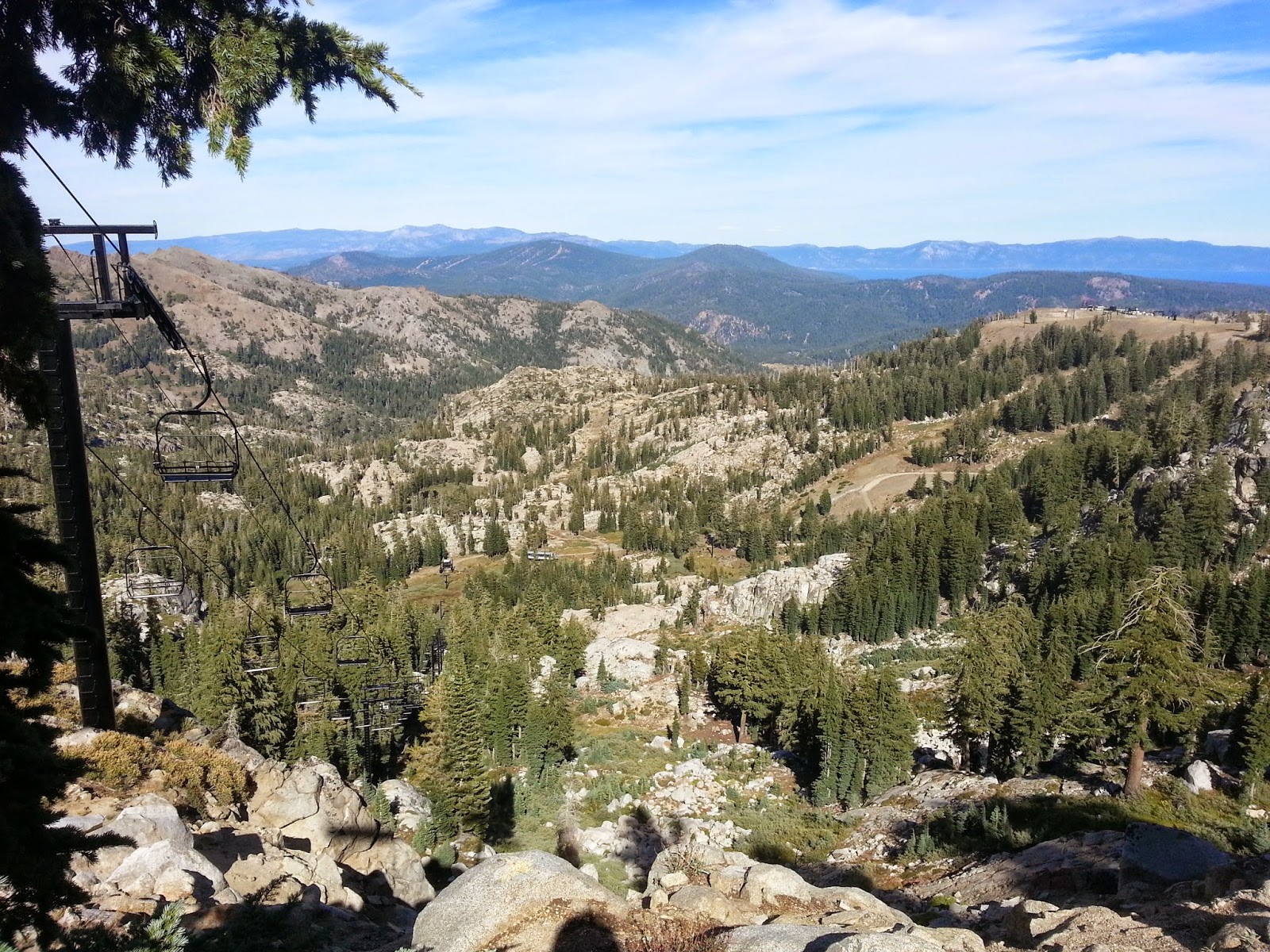