I sit currently on the edge of a cliff, gazing what feels like a thousand feet down into Crater Lake. 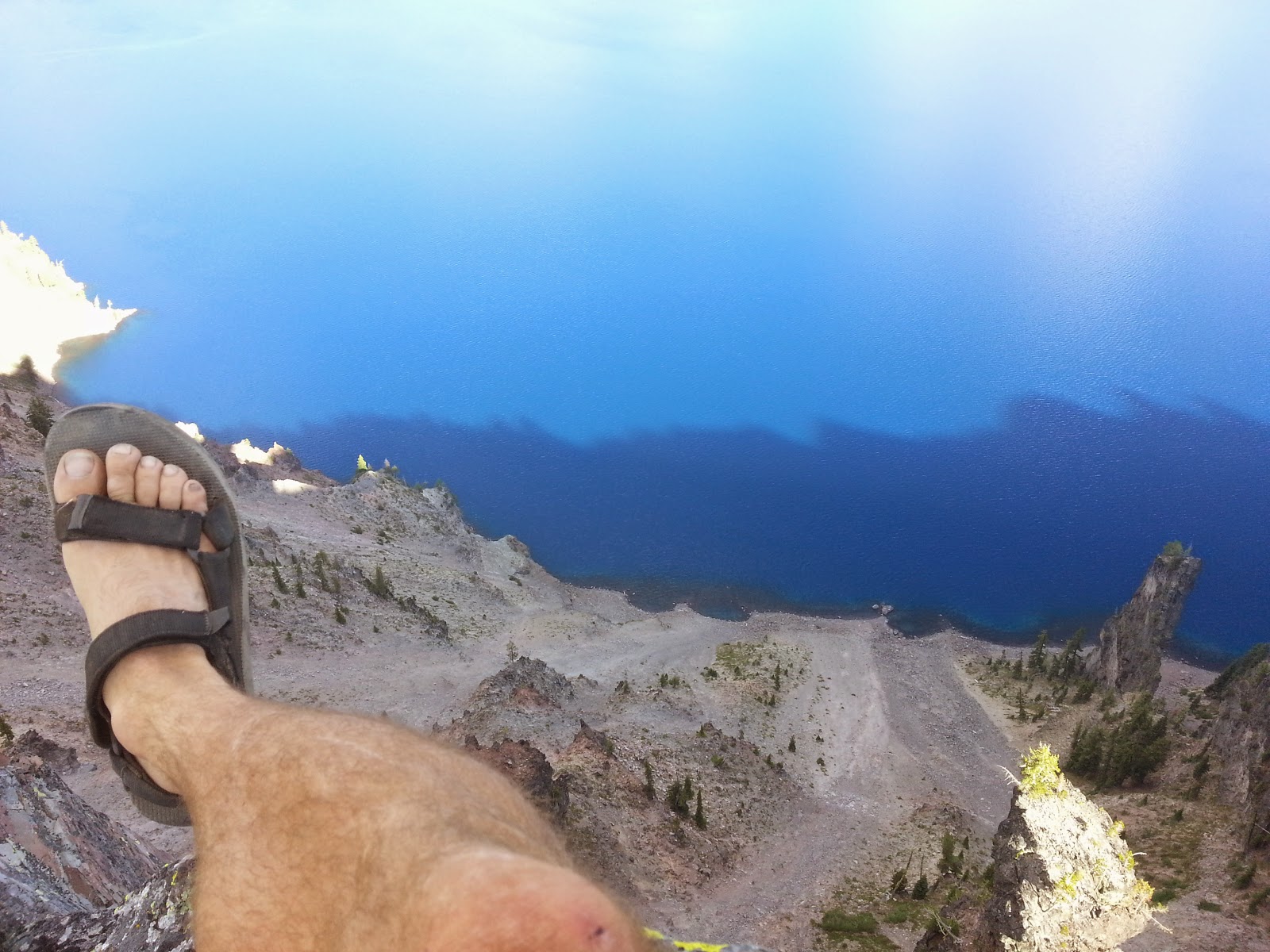 What a glorious night this will be! We made it here! At one point Maggie said she just wants to make it to Crater Lake. Well we're here so victory is ours! I didn't realize until I saw the maps of this coming section how close we were to Crater Lake. From Shelter Cove we did a 10 mile day, then a 16, another 16 and today a 20. It was very mellow. We did an alternate route that was supposed to be more interesting, the Oregon skyline trail. It was so peaceful, a dry dusty forest with the same Oregon volcanic looking desert pine tree everywhere. I like the forest like this, and the dryness began to remind us of California.

We stopped at Crescent Lake, a huge lake with a great view of Diamond peak and camped on the beach there. 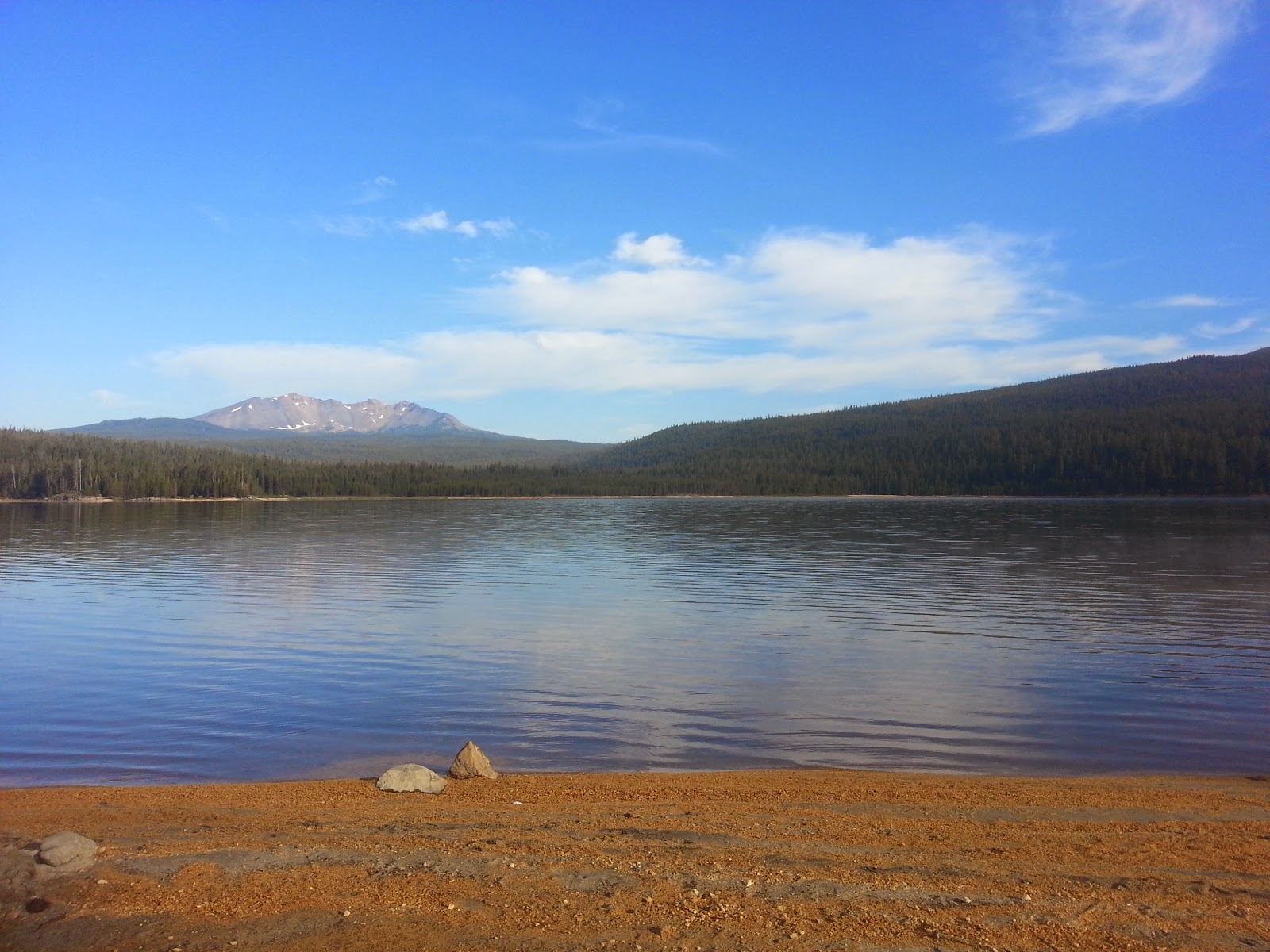 The next day we hiked farther and went back on the PCT. There we met three guys in their thirties and forties at a water cache. Goal-tech, (like goal oriented and technology he told us), Tooth Fairy, and Greg. Goal-tech pulled out his phone and let me and Maggie know a section of the PCT add just caught fire in the Sky Lakes Wilderness south of Crater Lake. Since then the section has officially closed. The three guys were hiking south which is a rarity, turns out we were headed to the same camp site as them. Then Goal-tech says he has trail magic. He hikes south and offers trail magic to all the northbound hikers he meets, carrying a huge bag on the outside of his backpack full of chips. "What would you like" he says, "a cookie, 3 caramels, a bag of chips, or a Starbucks via coffee packet." I took the cookie of course and Maggie the chips.

At camp that night we all made friends around the fire. Then a raving lunatic shows up to camp with us named "guy on a buffalo". I immediately disliked this arrogant person until I realized he was hilarious! He ended up being a good one. He was from Kentucky and pulled a huge hatchet out of his pack with red white and blue stripes. "This is my hatchet I've carried from Mexico, I'm going ULTRA HEAVY this year!" A joke against the ultralight mentality, after that I liked him. Then he chucked his hatchet against a tree. "I climbed Mount Thielson today." He told us. Mount Thielson is the pointiest, wickedest looking mountain I've ever seen, and a slightly psychotic climb. "Yeah, it was easy you totally have to do it. Super sketch though! You gotta do it though ya know, but it was super sketchy. You should totally do it...So sketchy though!"

Goal-tech had another idea of a mountain summit. Supposedly as good of a view as Thielson with a fraction of the effort, Tipsoo mountain was just a 20 minute walk through a meadow off the PCT. Me and Maggie both thought that would be a good idea for a side trip. The next day we did it. We were only hiking 16 miles and had gotten started at a new record, 5:30 in the morning. On the trail in the dark! We were practicing for the 27 mile dry strech that ends at Crater lake. If we were to do that all in one day we'd have to wake up early. 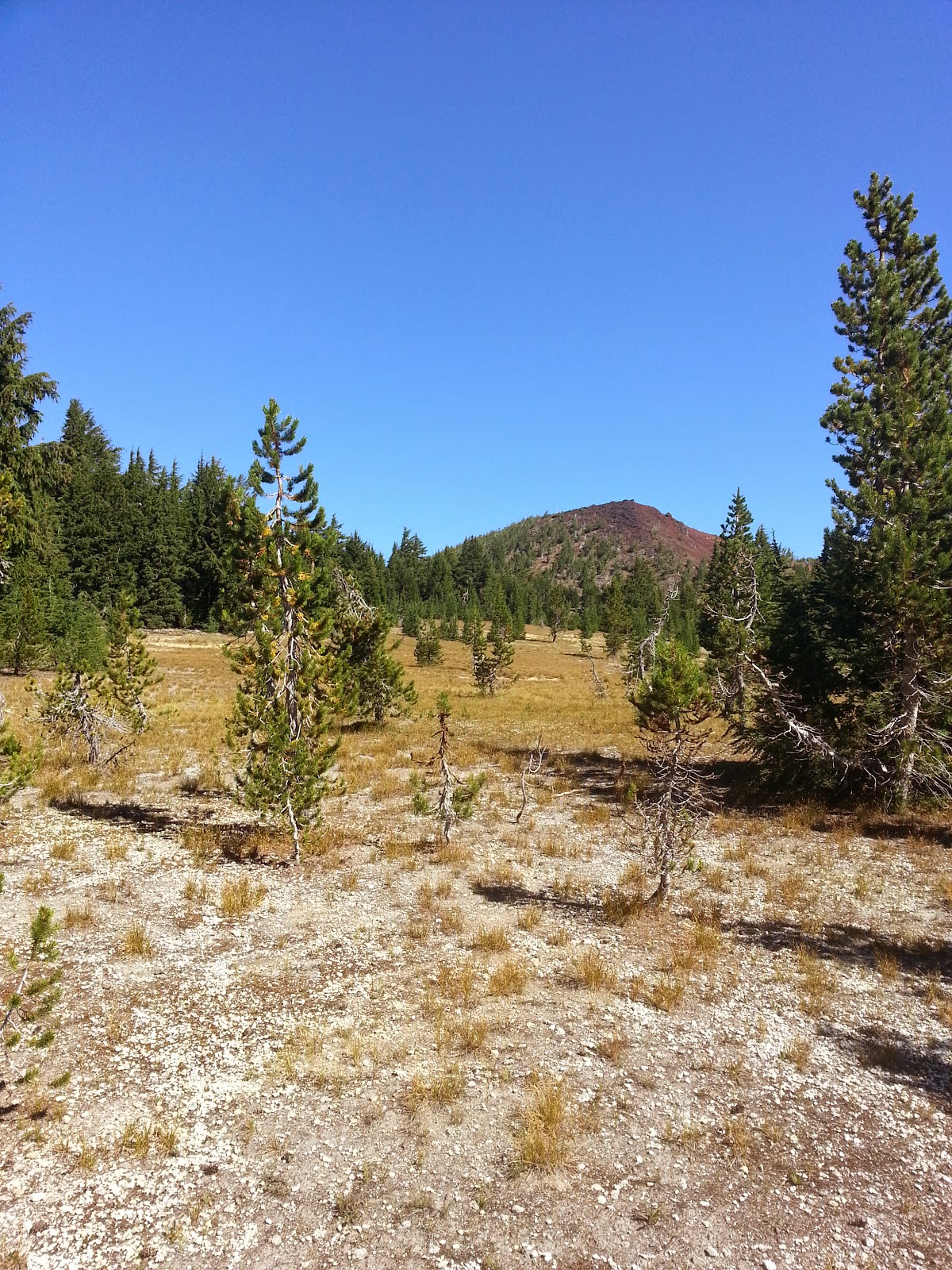 We got to the meadow and forked off to the west through it. Up and up we climbed through the meadow until we found the trail to the top. "I don't think I wanna go up anymore" Maggie panted. "You're already at the top!" I told her. Surprise! We turn the corner and there was the most expansive view, possibly the best in Oregon I've seen. 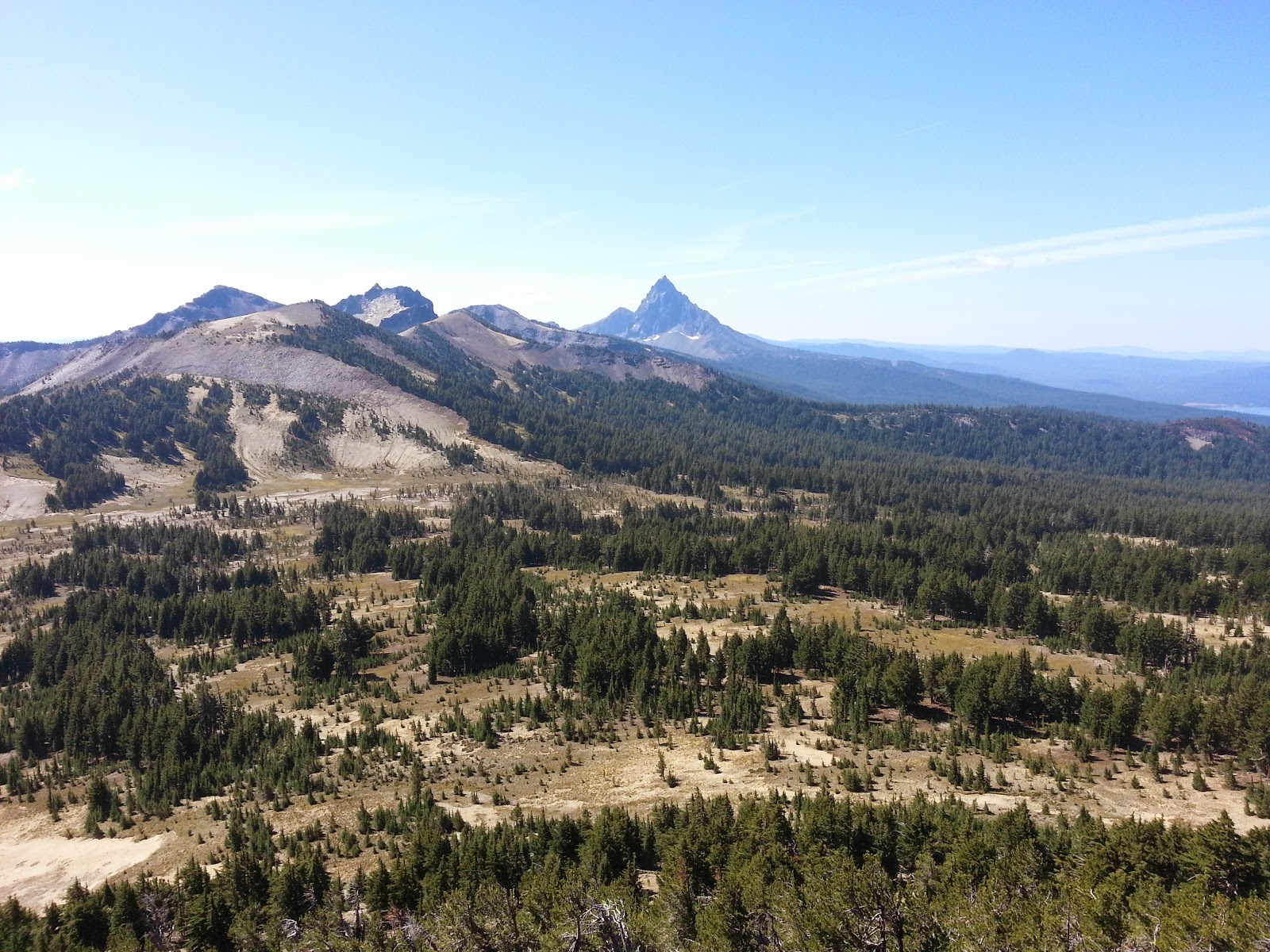 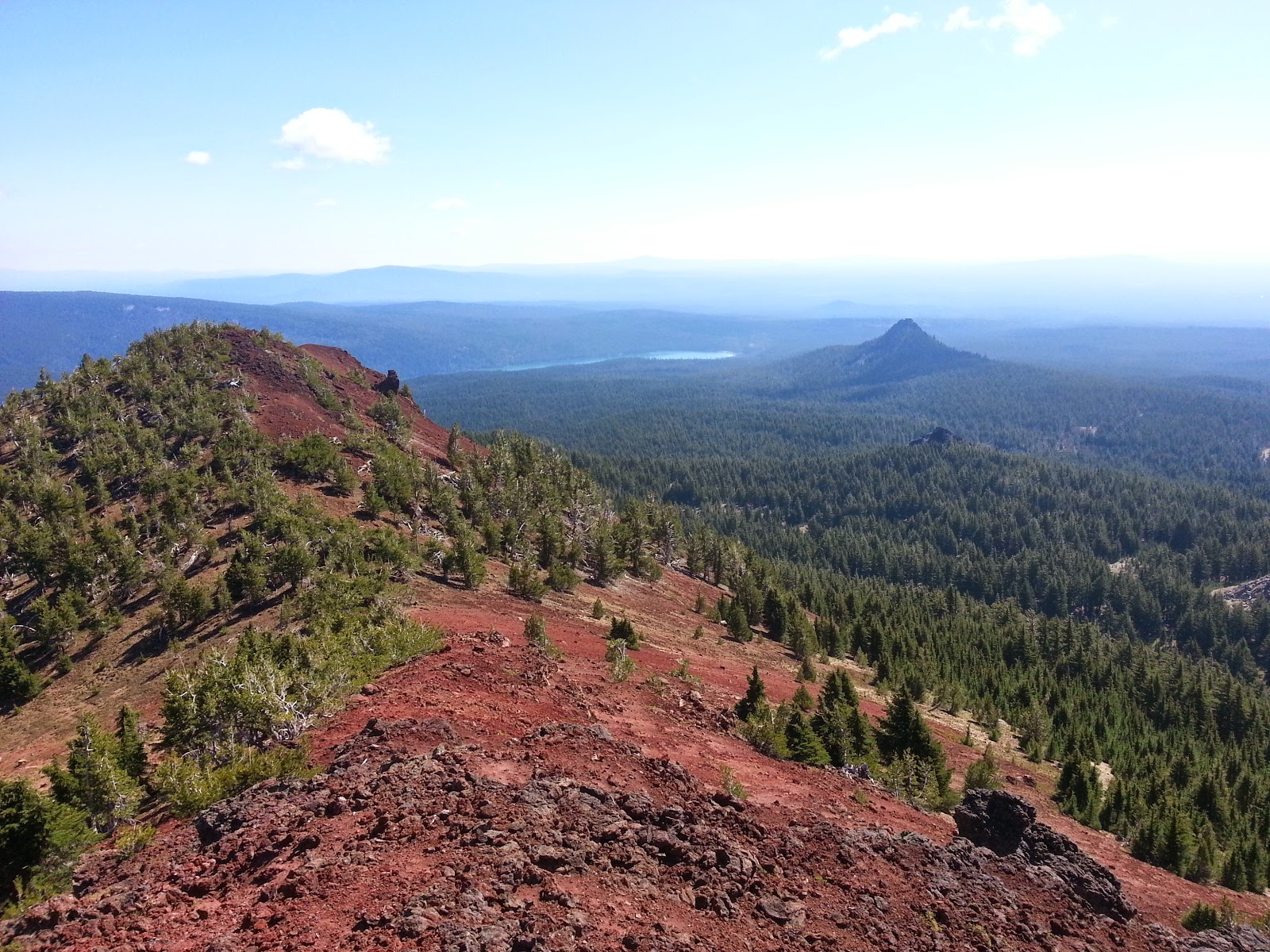 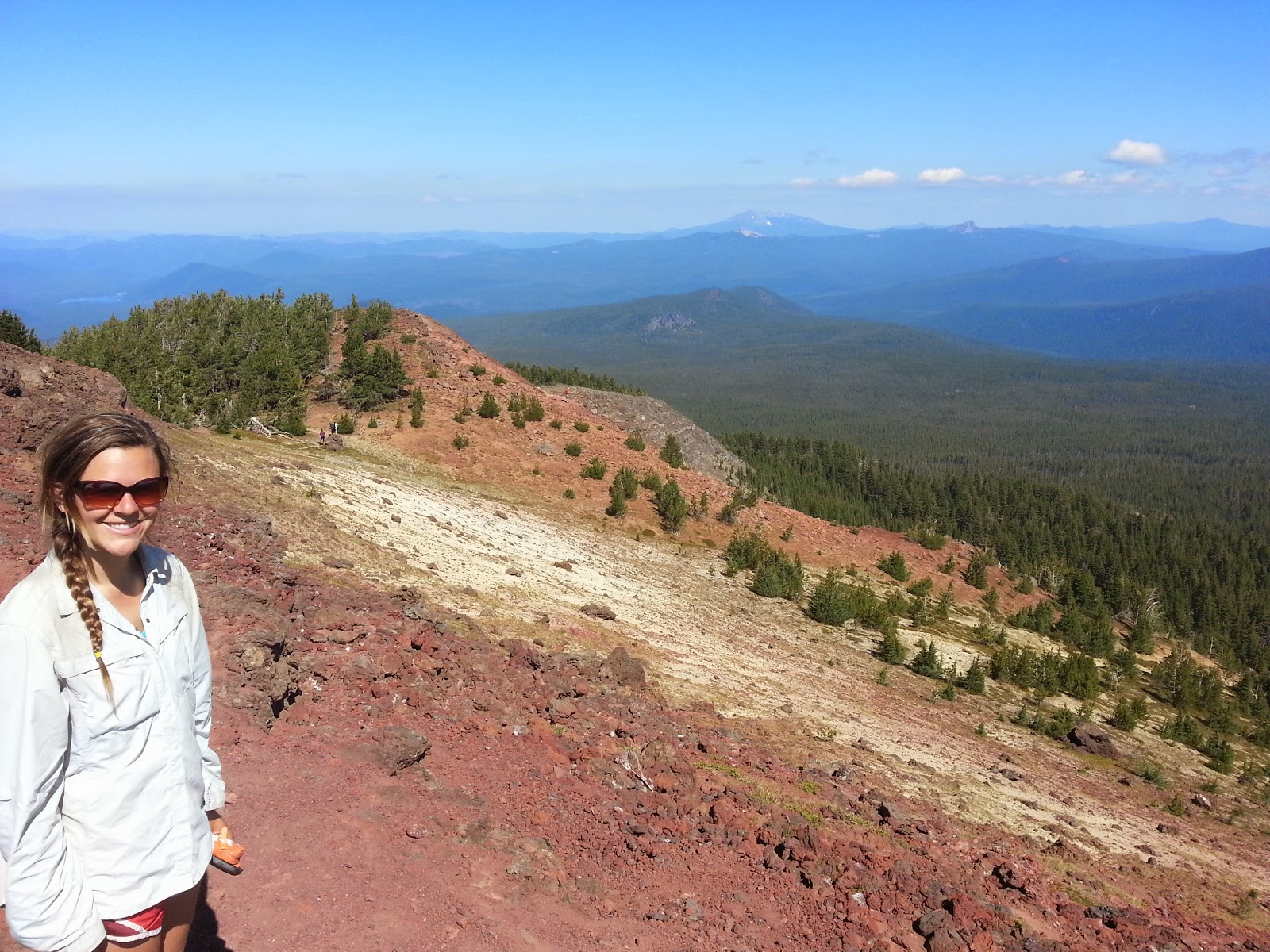 We could see far to the north, showing off Diamond Peak, mount Bachelor and the 3 Sisters. Crescent lake was there, we could see all the land we had crossed. To the south was pointed Thielson, our first look at him. 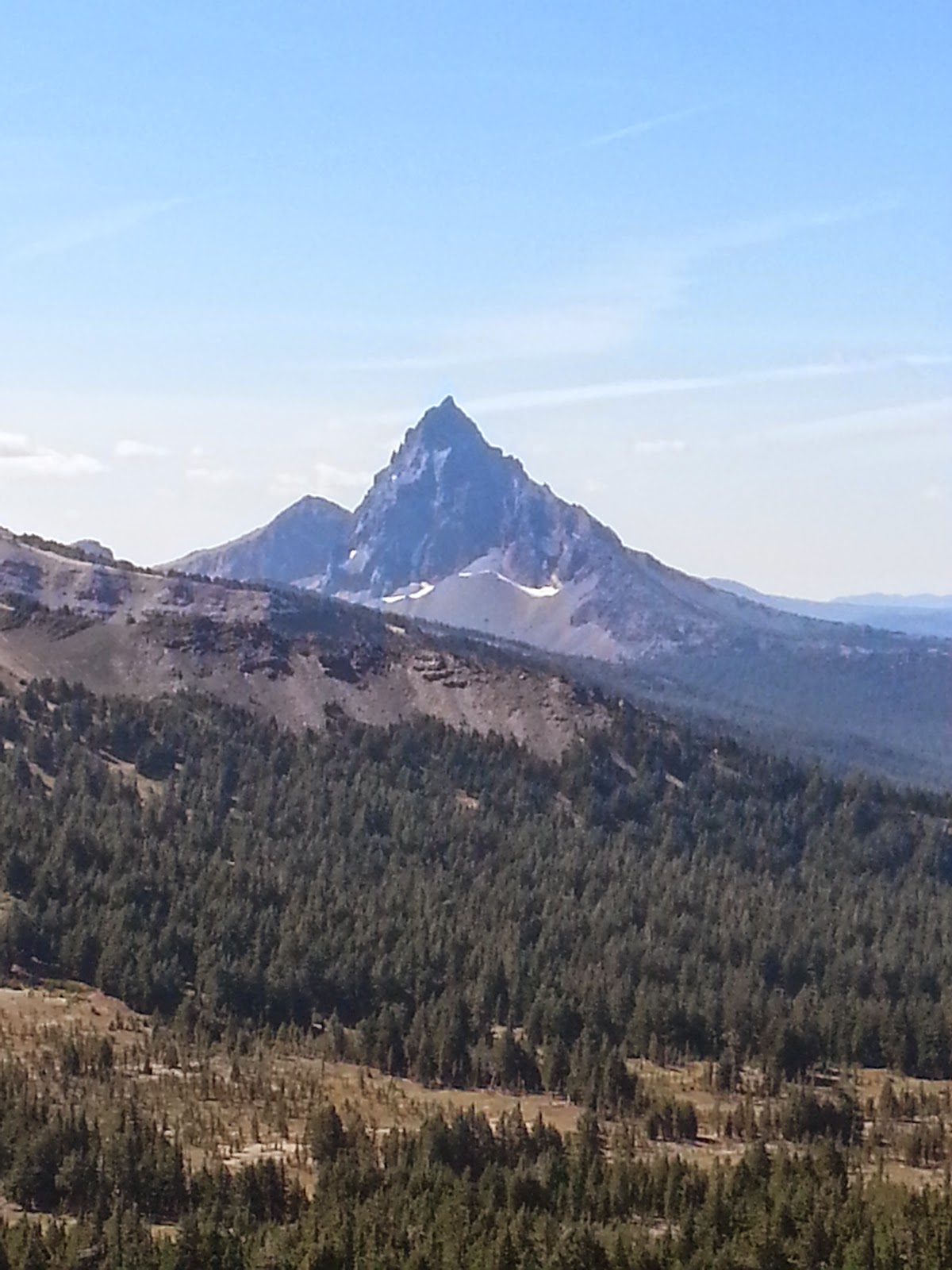 It was only 10 am we had started so early, we sat at the summit for over an hour. We met two people up there Dan and Elaine, we told them our whole story. Then we mentioned we have 27 dry miles to hike to get to our water source at Crater Lake. The last 6 miles of those take place along Crater Lake rim but there's no water there either. Dan and Elaine said that they were going to Crater Lake tomorrow and they would leave us a water cache on the rim! Cool looks like we may have some more camping options...

So we then hiked to Mount Thielson and camped by some painfully cold, clean delicious water. The views up to Thielson were awesome and we got to camp at 2 in the afternoon! So we just relaxed all day. This had been one of my favorite days. 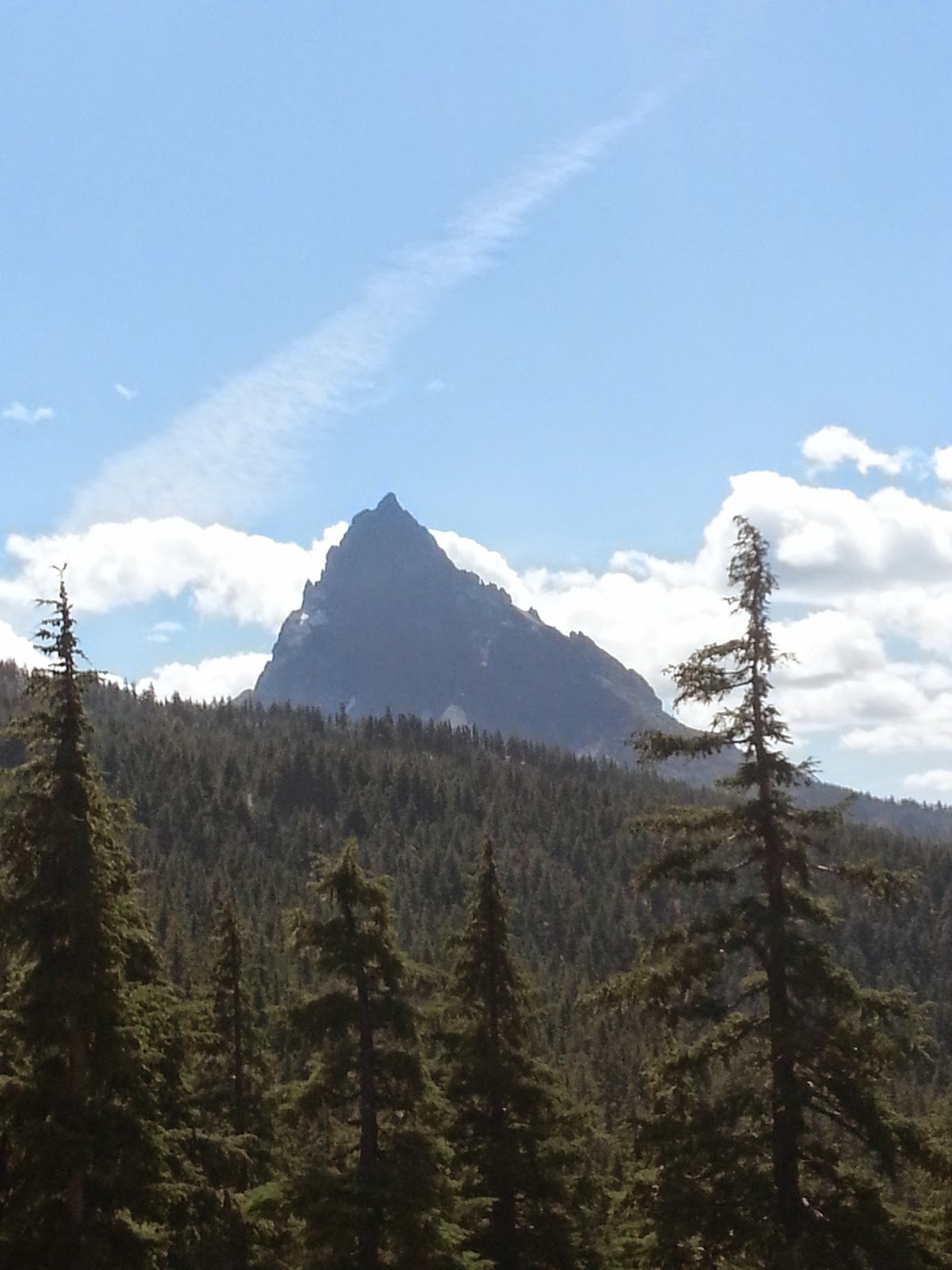 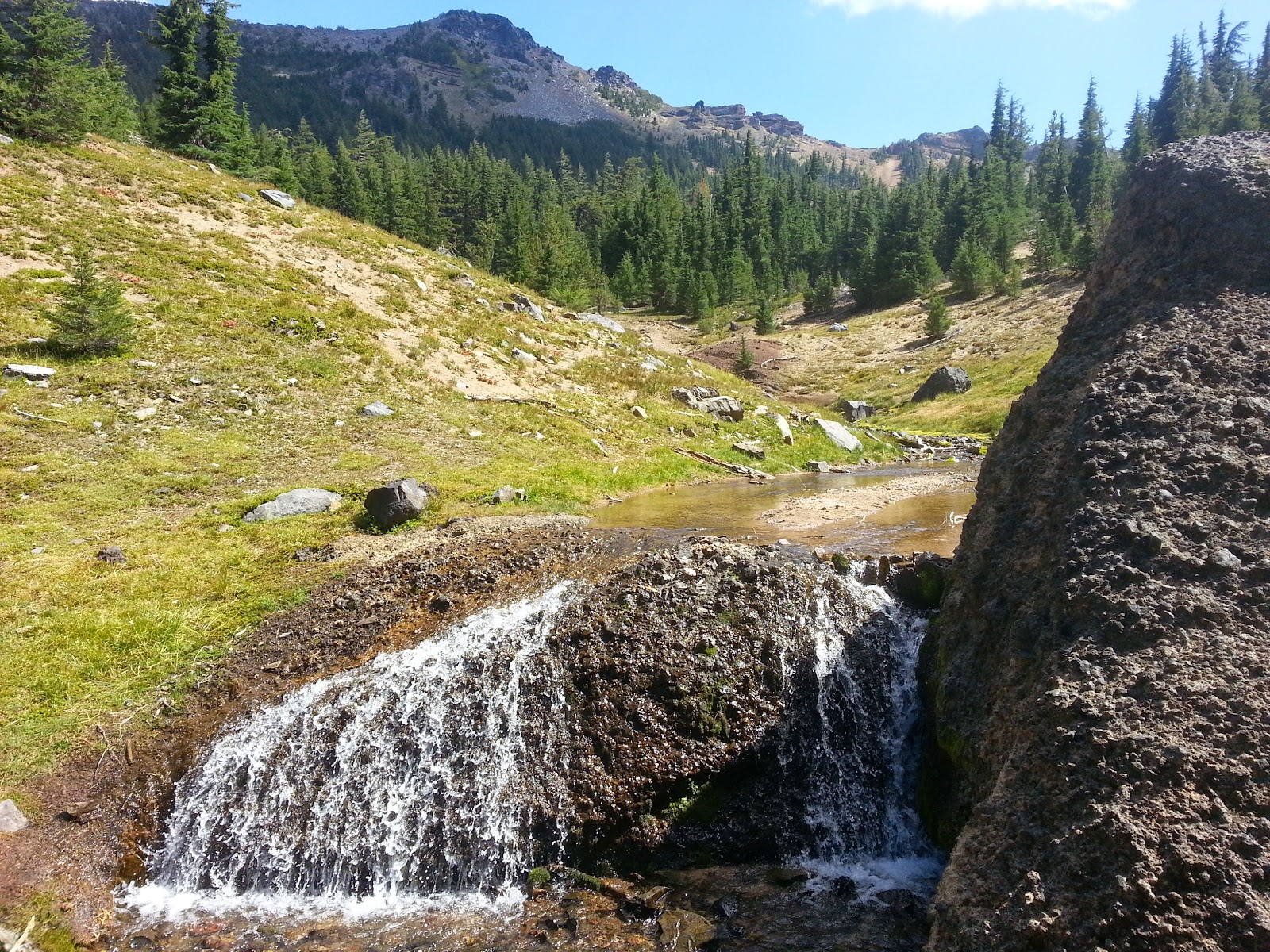 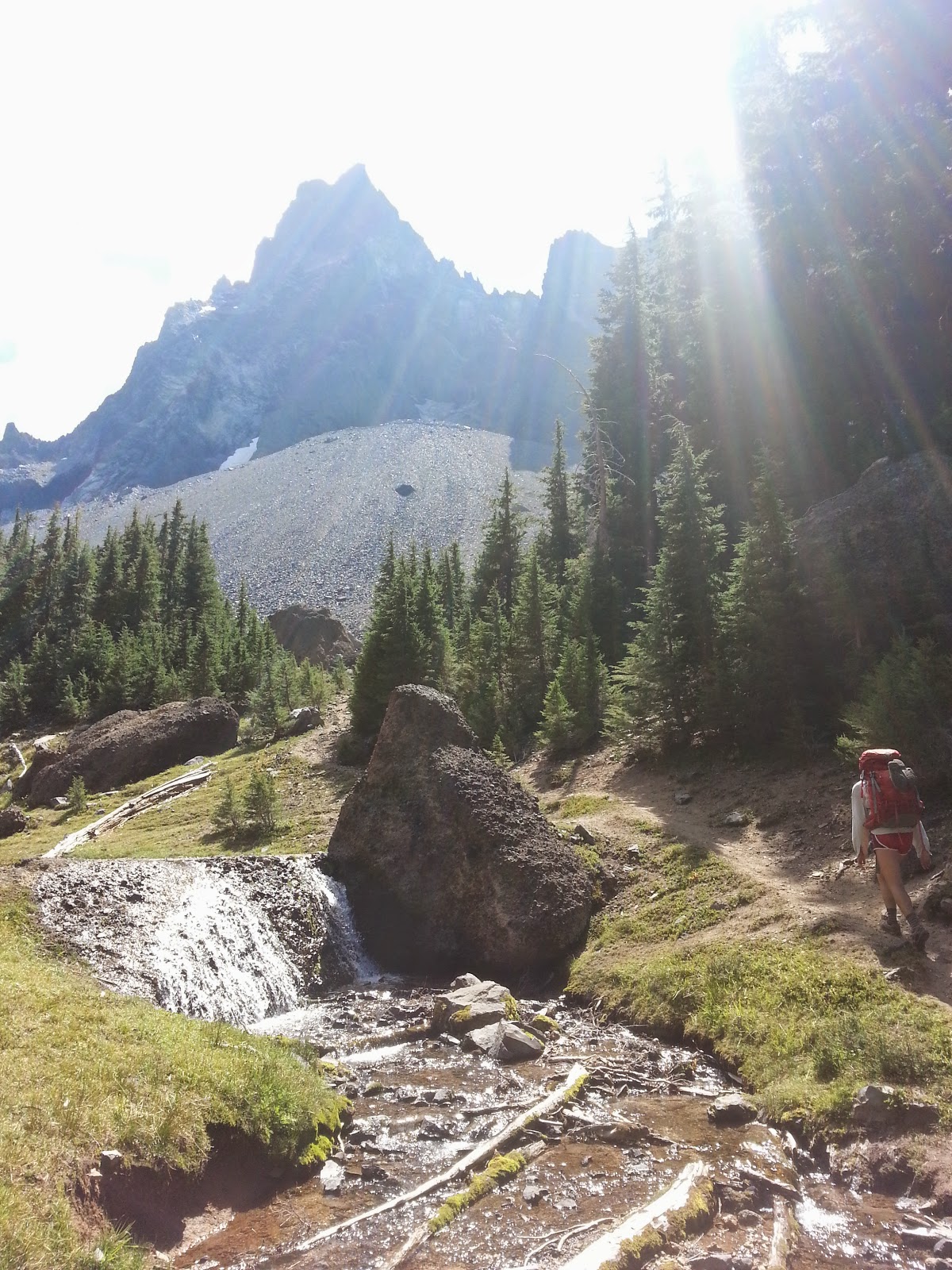 Goal-tech and friends camped with us again. We woke up for a big day at 3:45 in the morning. It was record timing that at 4:37 we were on the trail, eating candy and drinking water from the freezing stream by our flashlights in the cold and windy darkness of early morning. We hiked in the dark for an hour and a half before the sun slowly rose. Right at sunrise we climbed the ridge looking up at Thielson, so powerful and scary looking in the predawn light. 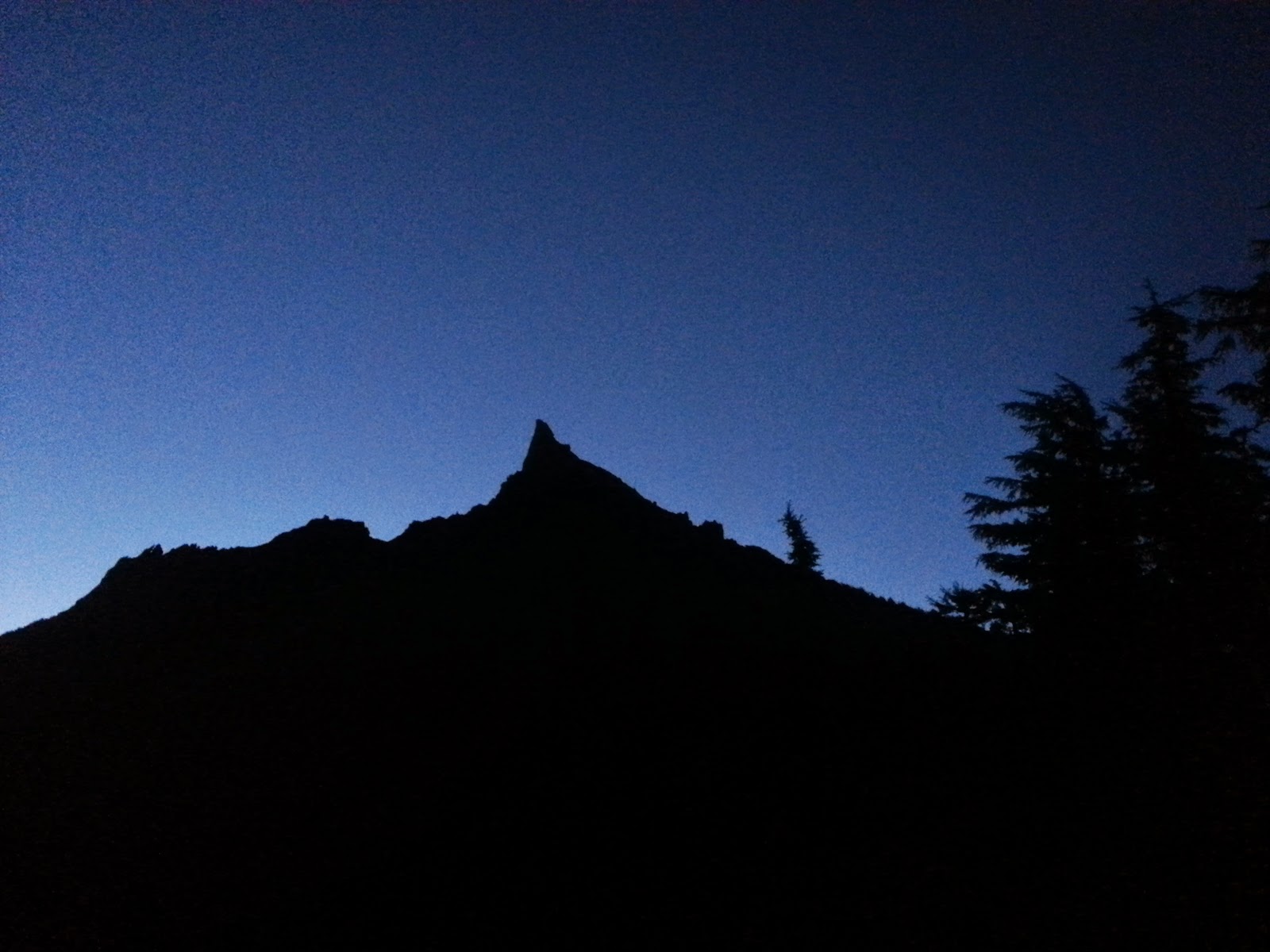 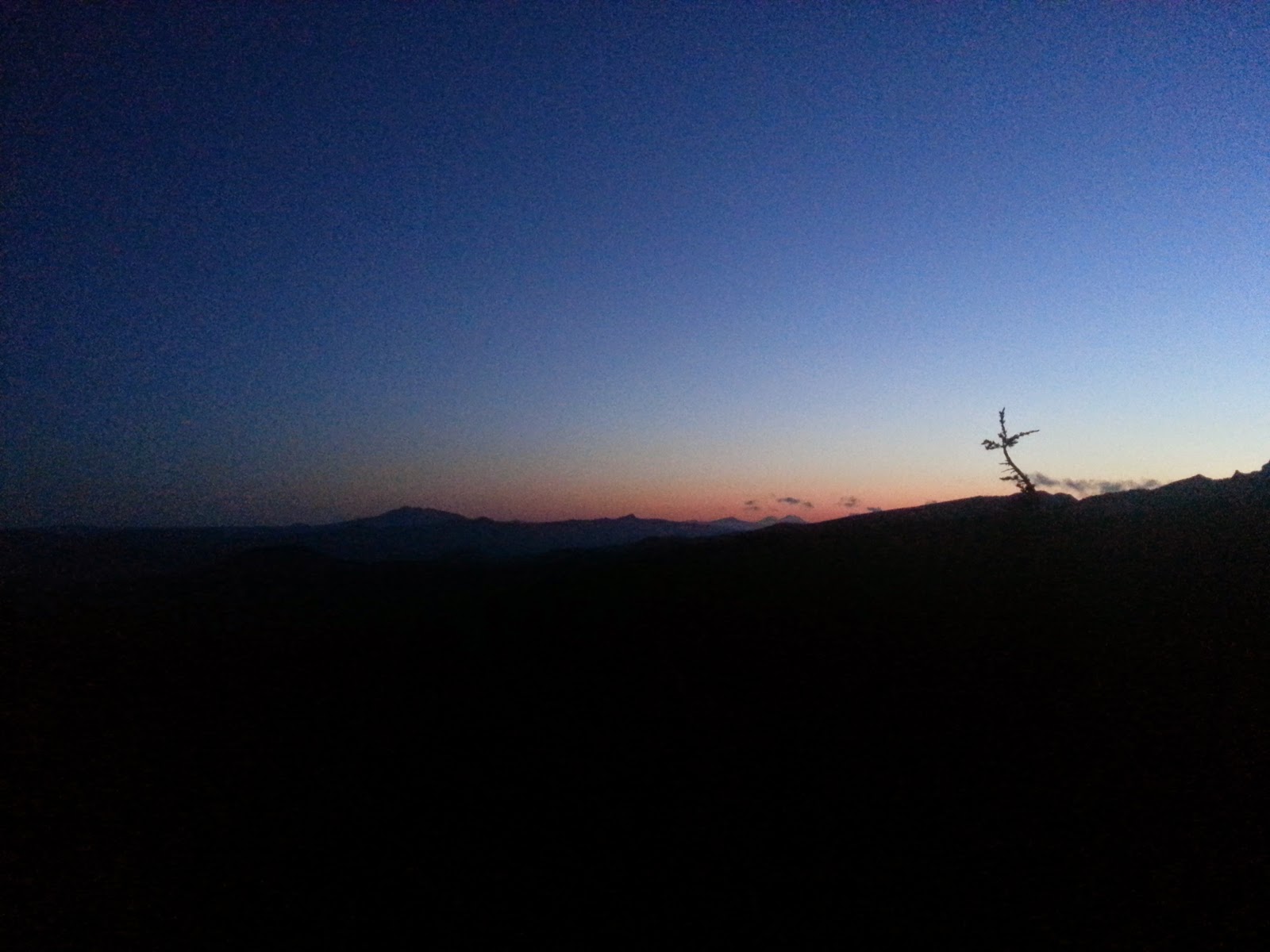 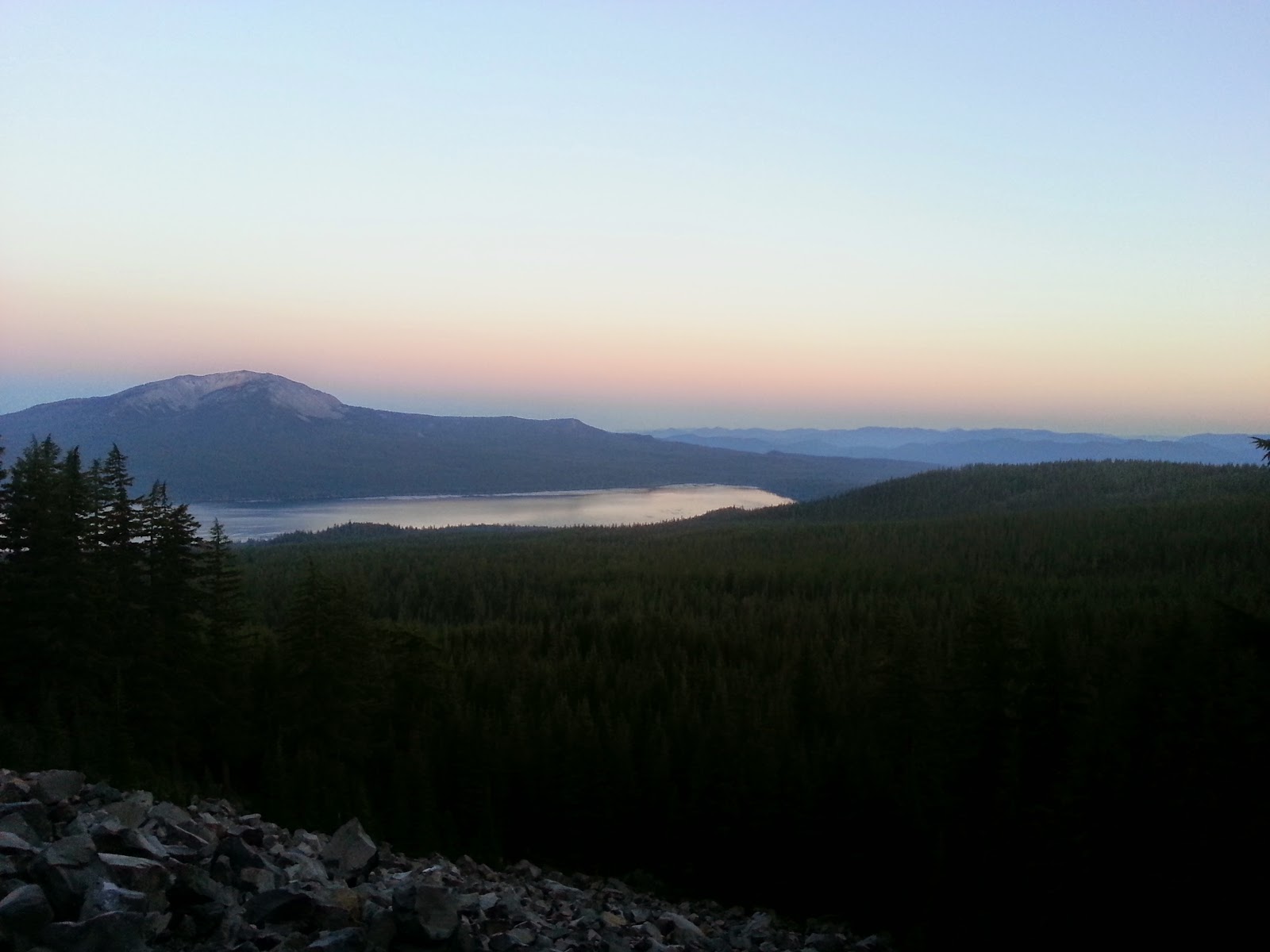 It was the happiest most exciting morning. Then we walked all day. It was a monotonous desert forest, the pumice desert. The anticipation grew all day as we slowly closed in on crater lake, our target. We thought of this truly as the end of one adventure and the beginning of another. Eventually we got there. Maggie asked me if I was going to cry. We walked up to the edge of the crater and the view revealed itself. 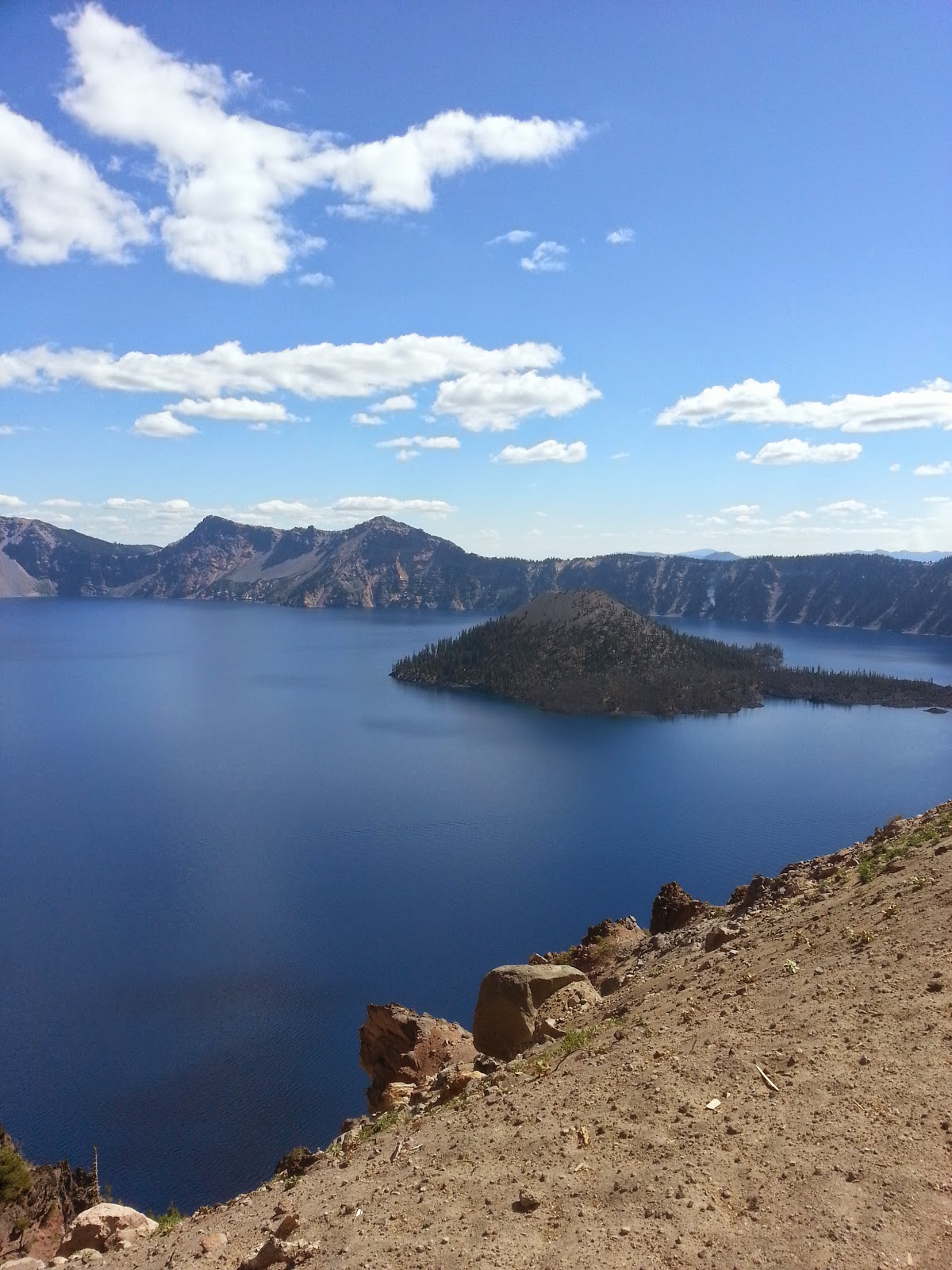 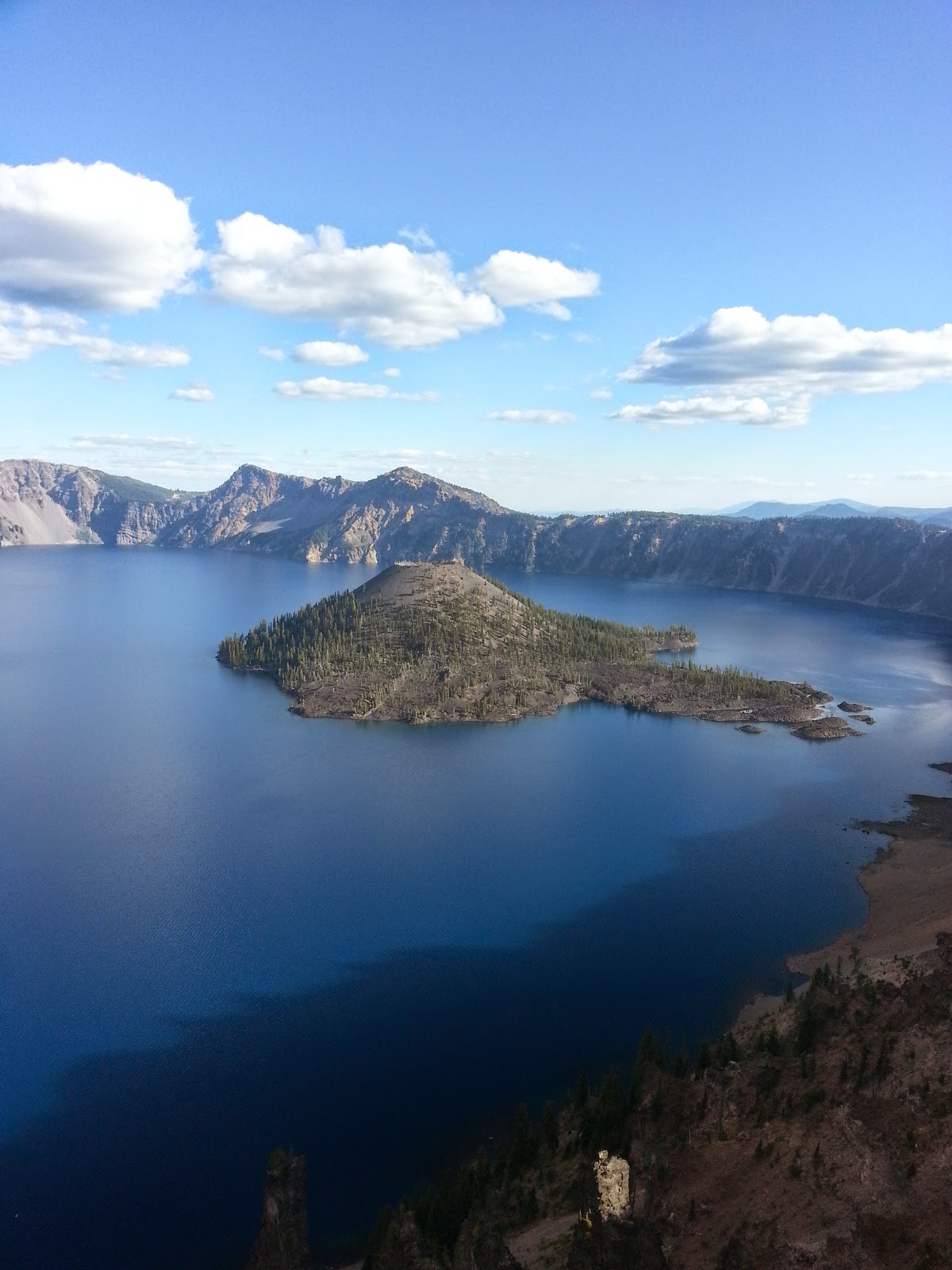 It's so big and overwhelming you can't process and take in what you're seeing for the first few seconds that you see it. It was amazing among the most beautiful sights of my life. It was sublime and Maggie was the one who cried! Then we found the water cache. Dan and Elaine left us two gallons along with some beers, so we just camped there on Crater Lake rim. Illegally but it was worth it. We watched the sunset on the lake that night, gazed in for hours into it perfect blueness until it became dark. 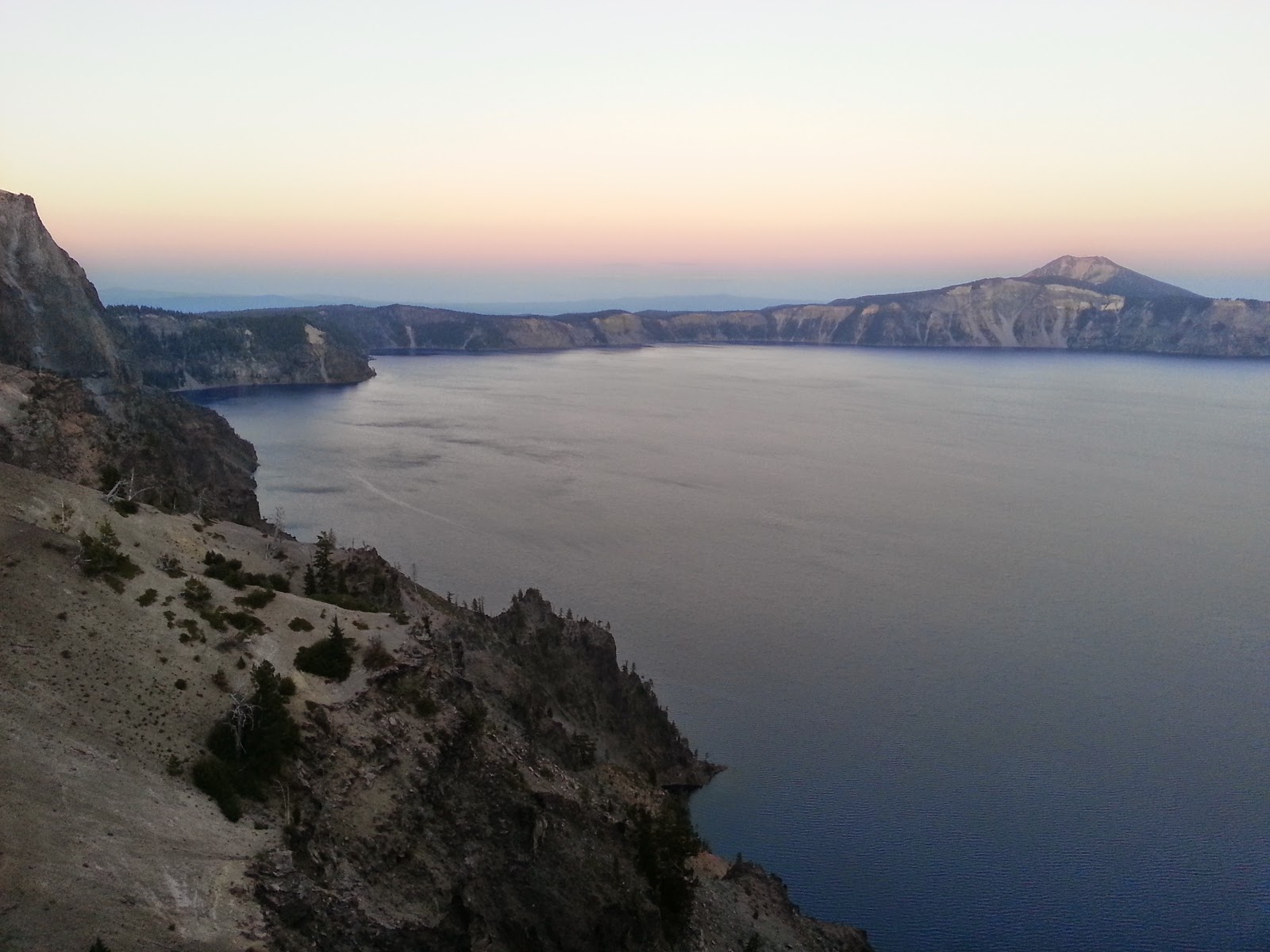 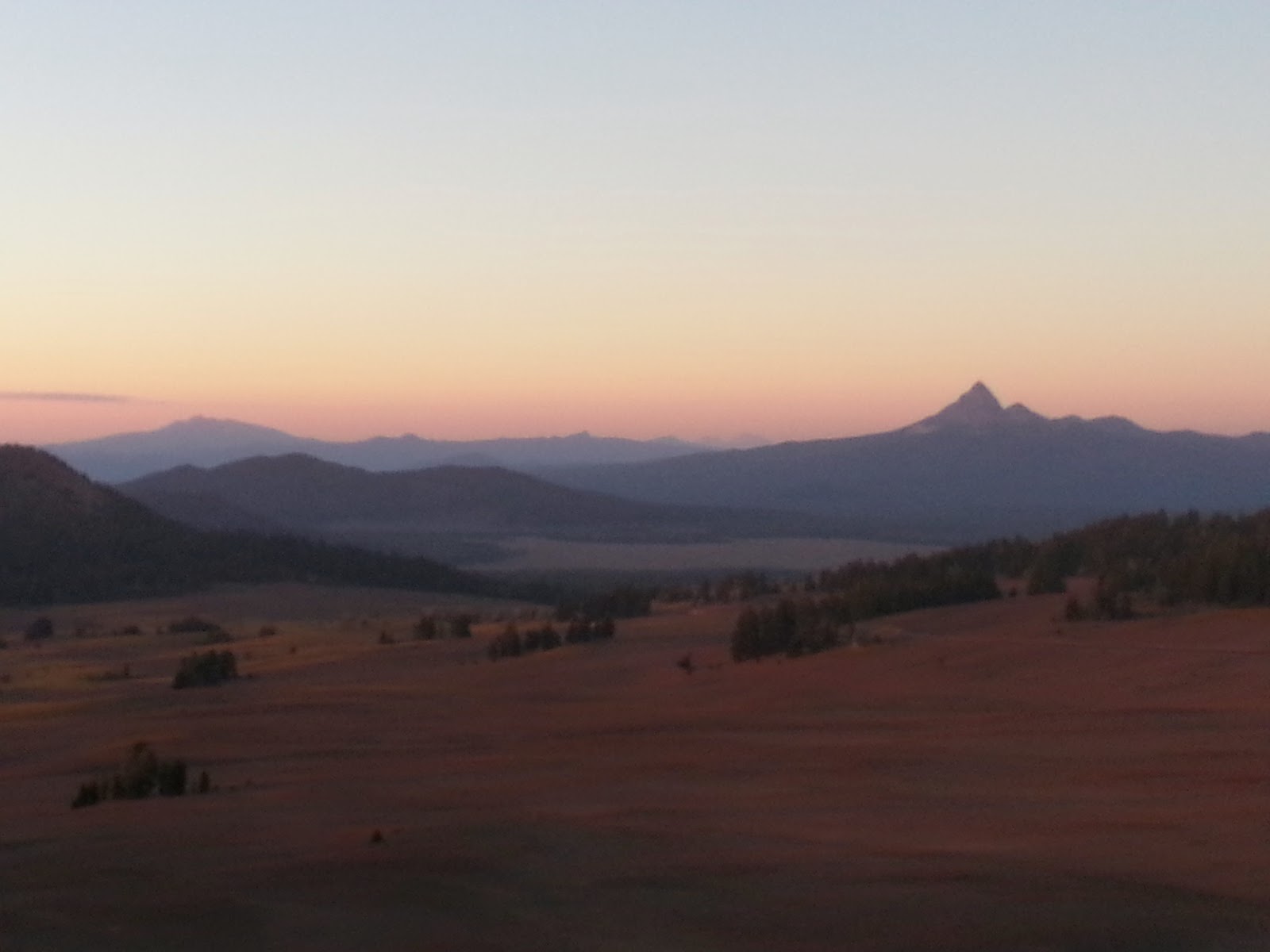 In the morning we hiked the rim. We saw an awesome sunrise on the lake. 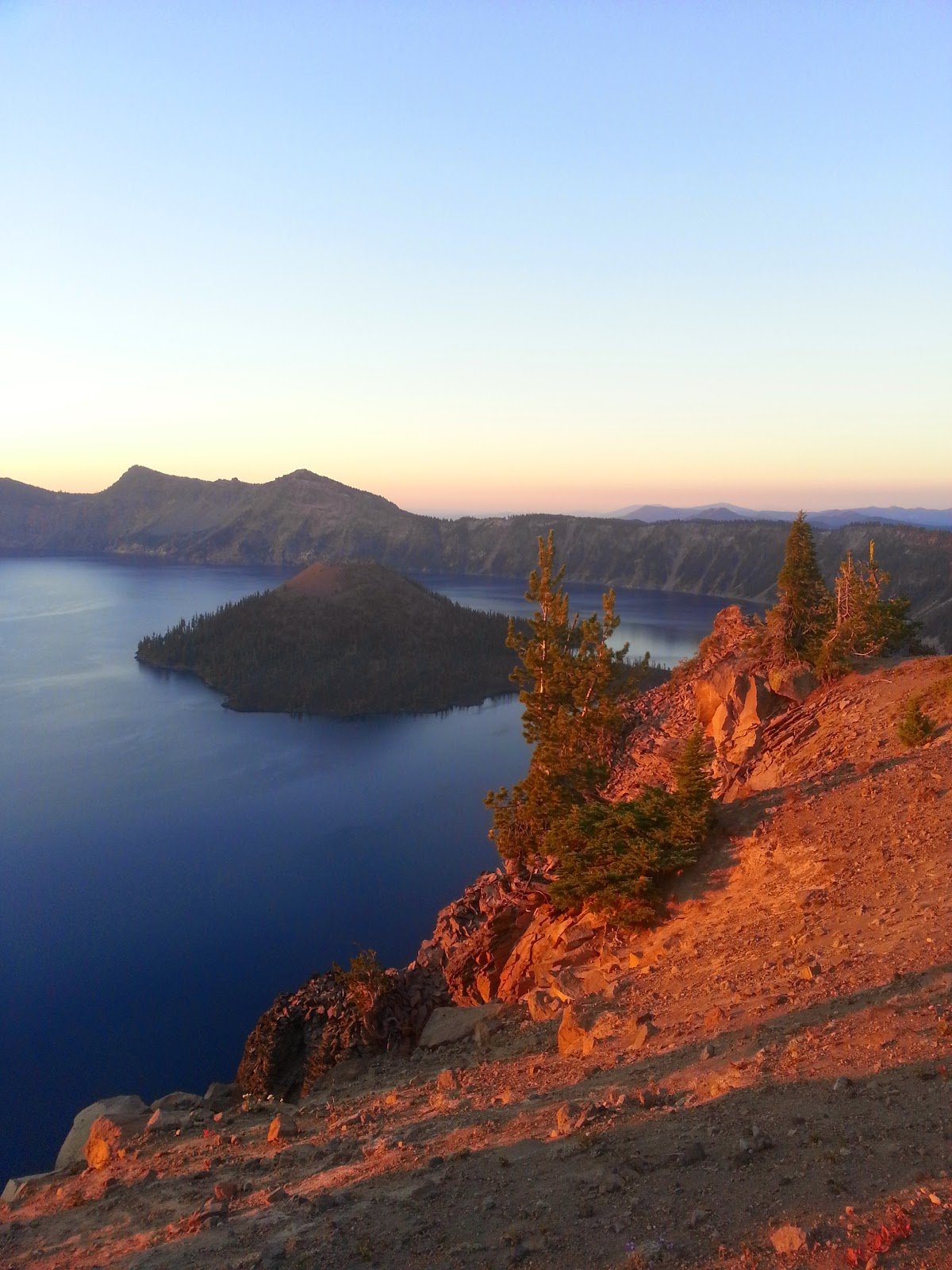 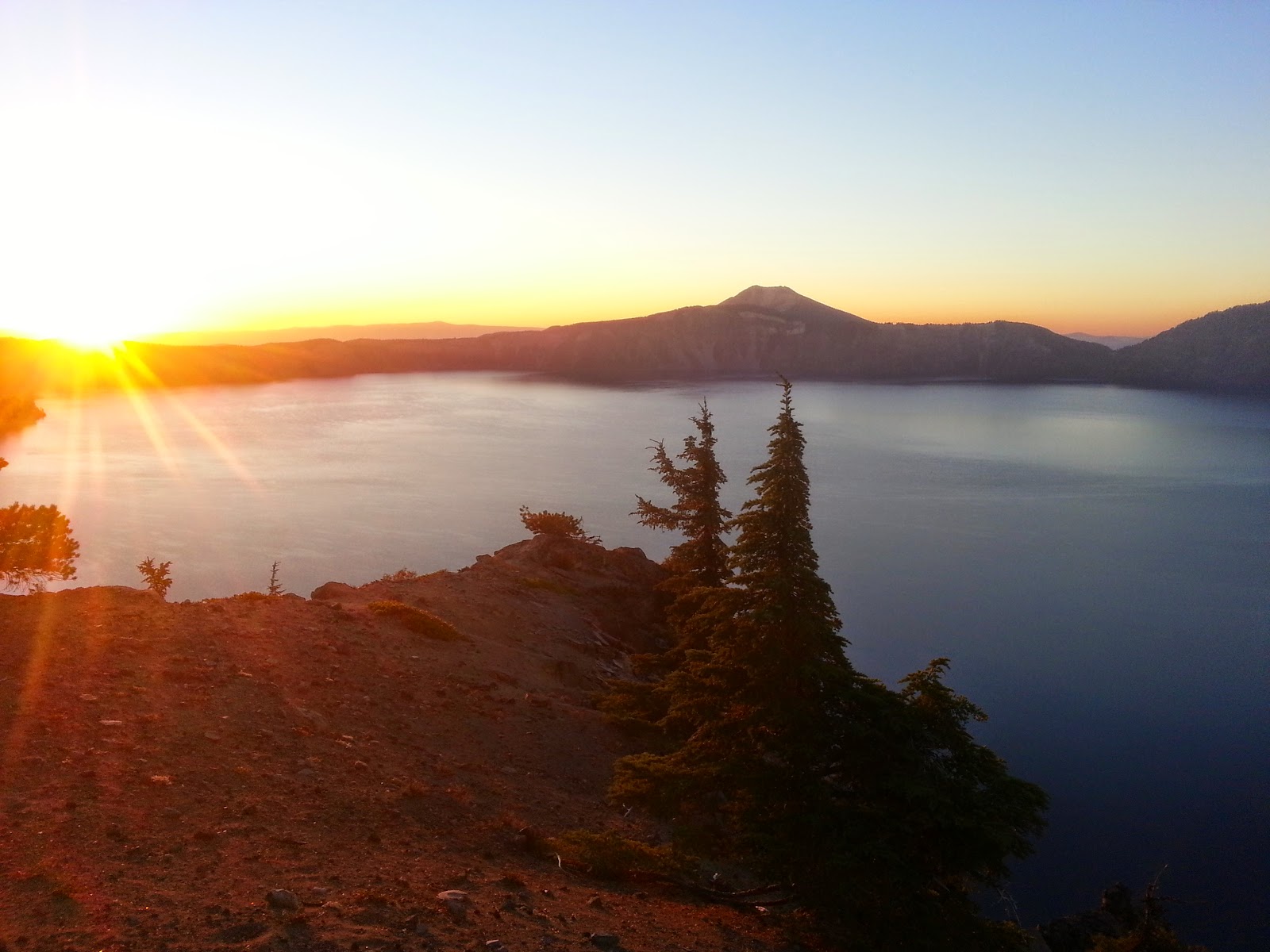 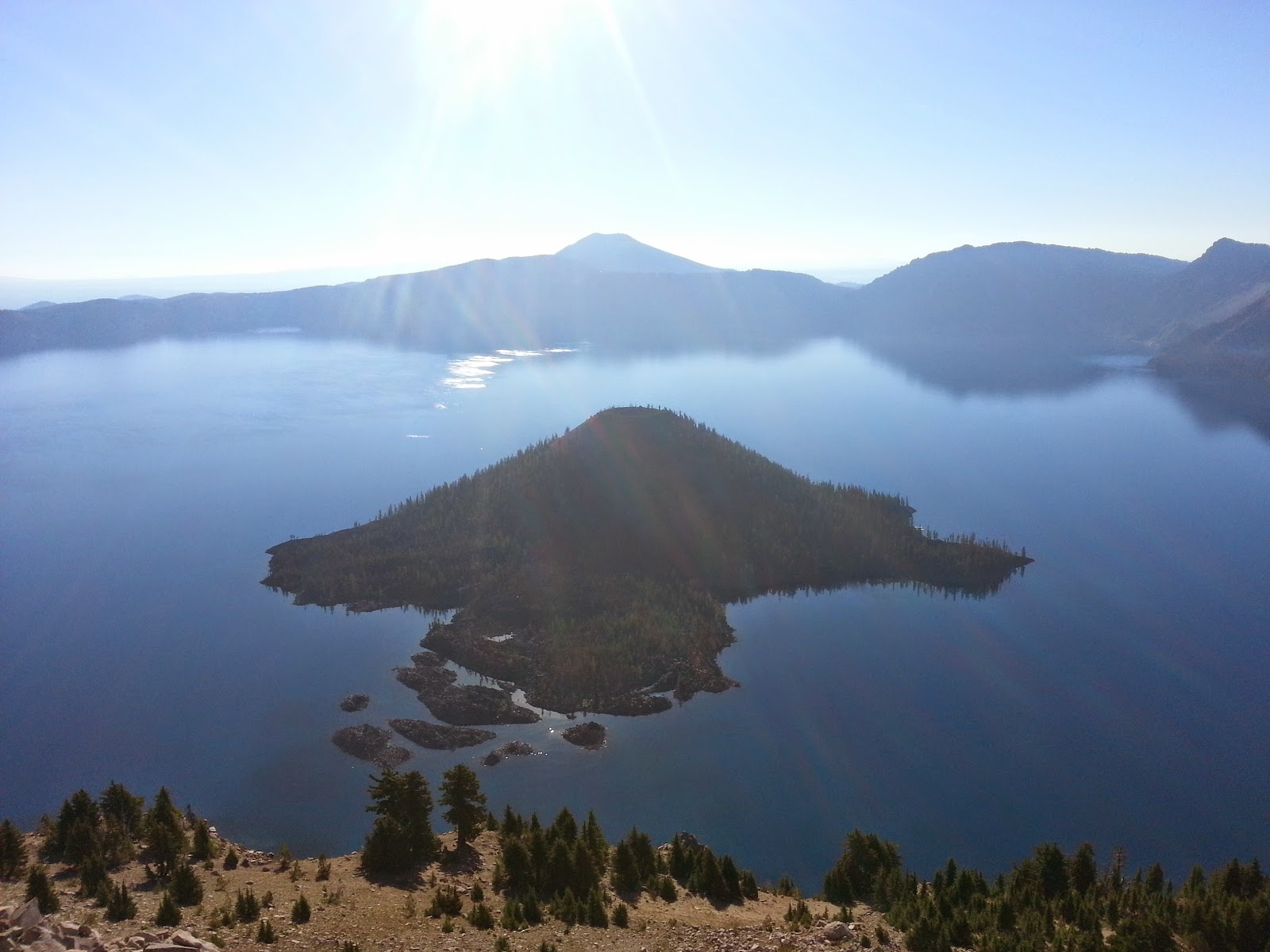 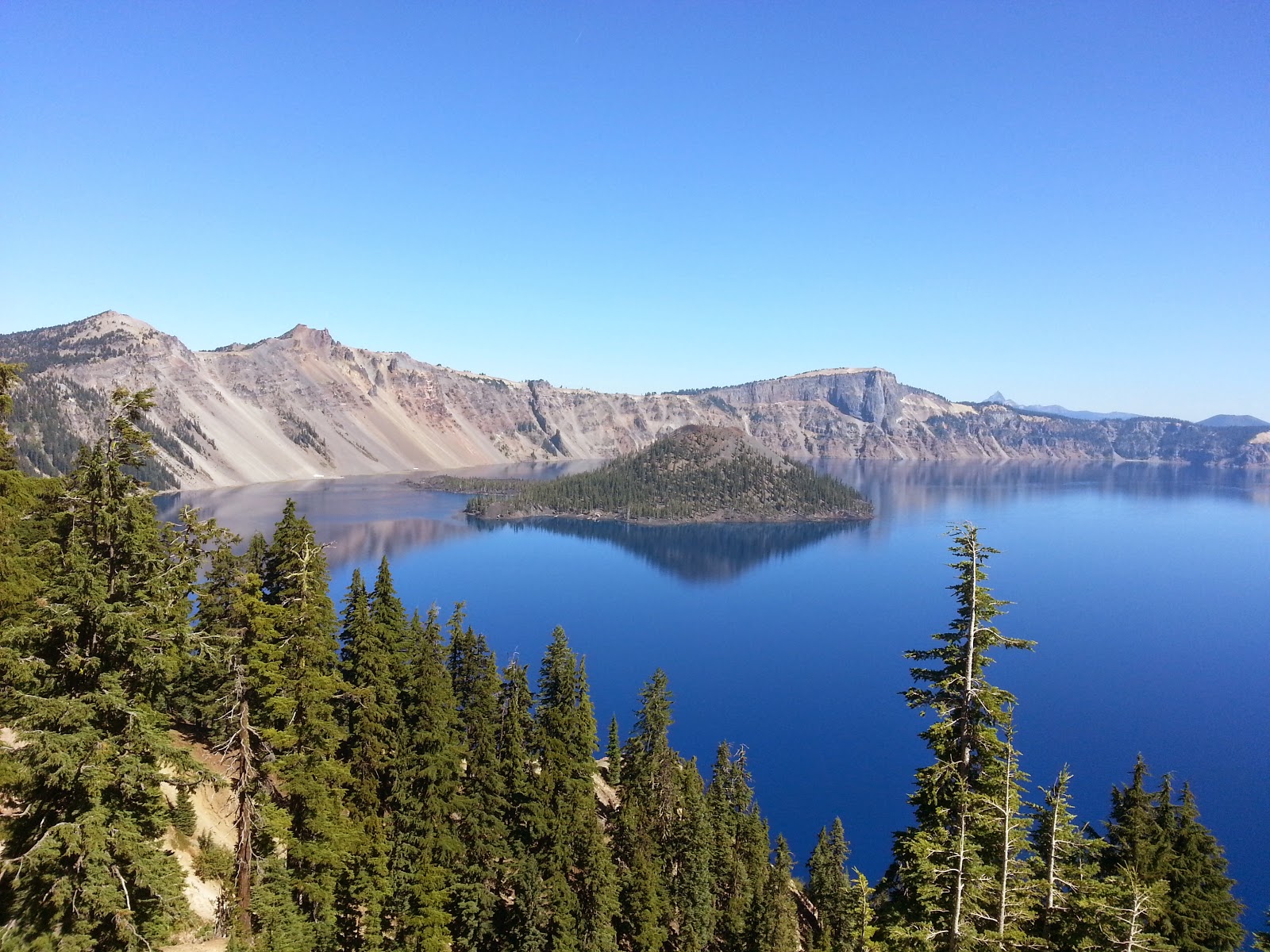 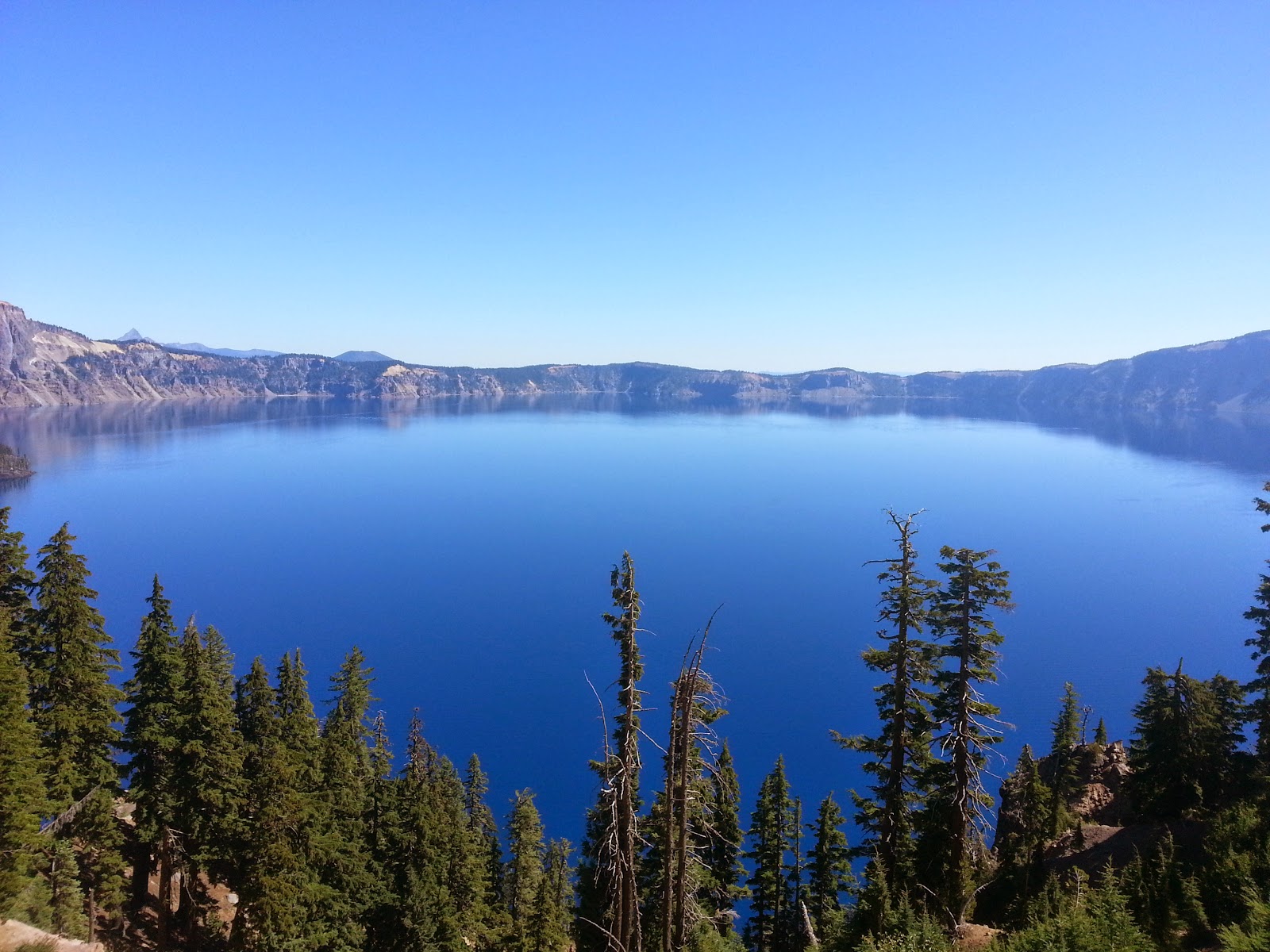 We got to the town, out of food and very hungry, but we had to take the trolley 7 mile to Mazama Village before we could eat.  Well we were early again, and the trolley didn't run for 5 more hours! We started walking there and I stuck out my thumb to hitch a ride. Now Maggie reminded me that it was also illegal to hitchhike in Crater lake, but she didn't want to hike anymore either. Then a car stopped and who should be driving about a ranger! Maggie was terrified! The Ranger was nice and gave us a ride and didn't even inform us of the legality of hitch hiking in the National Park.

So we arrived at Mazama village. They sucked, they charged $5 to camp there and we thought that came with the use of their showers but the shower sucked, didn't have hot water. The spot was extremely far from the restaurant general store, ironically putting the hikers spot way out in section F when the people with cars are right next to the store. Then a ranger came up and interrogated us to see that we paid. I wanted to demand my money back! We hate the National Parks!

So after that we had to detour. A huge fire erupted in the sky Lakes Wilderness and burned over the PCT south of Crater Lake. We had thought Goal-tech would give us a ride around it. Then he showed up, with his family in the car. We said a nice goodbye and they gave us caramel popcorn and then left. There goes our ride! We were already set up to camp there, oh well. We will decide what to do in the morning... 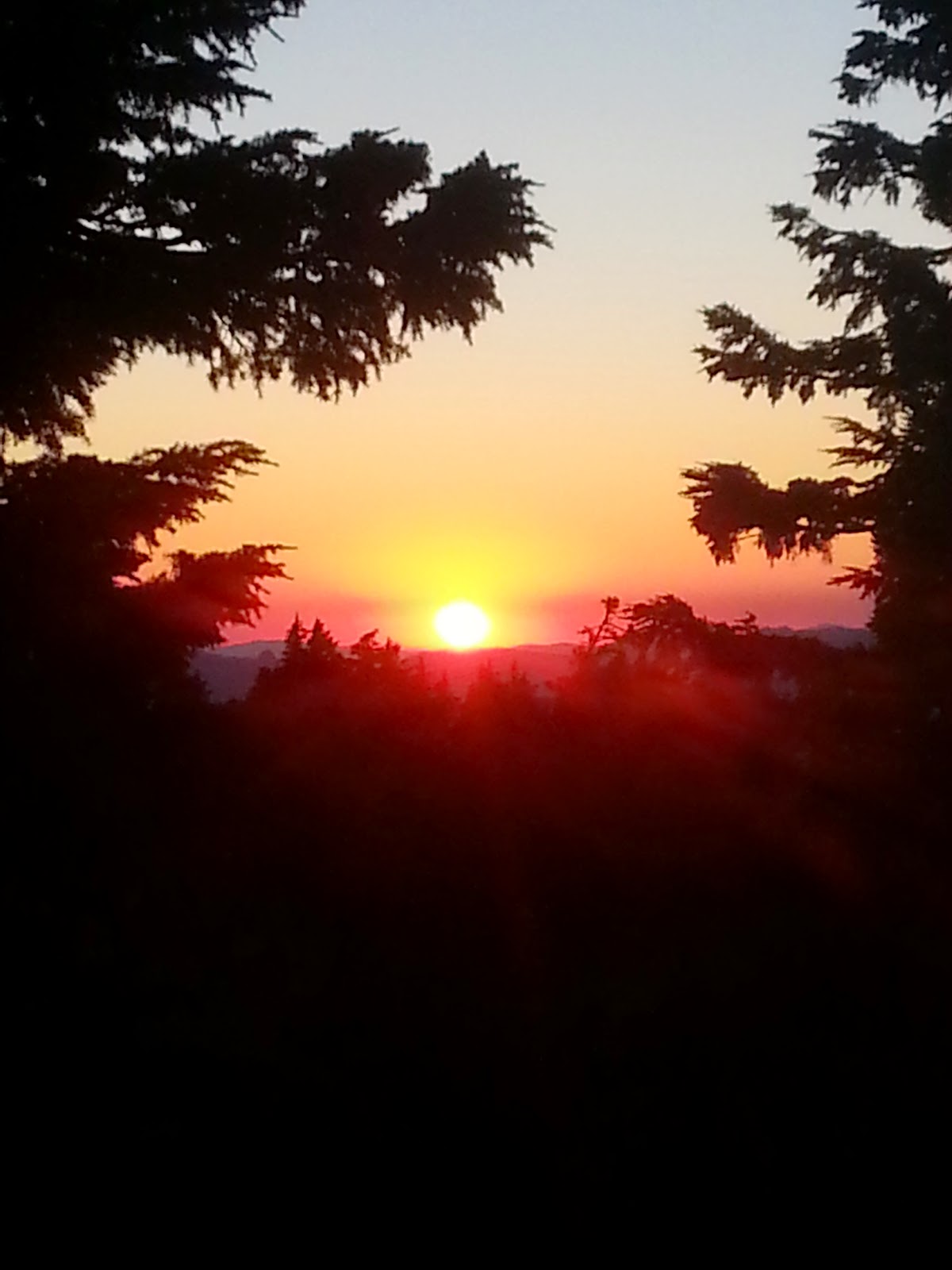